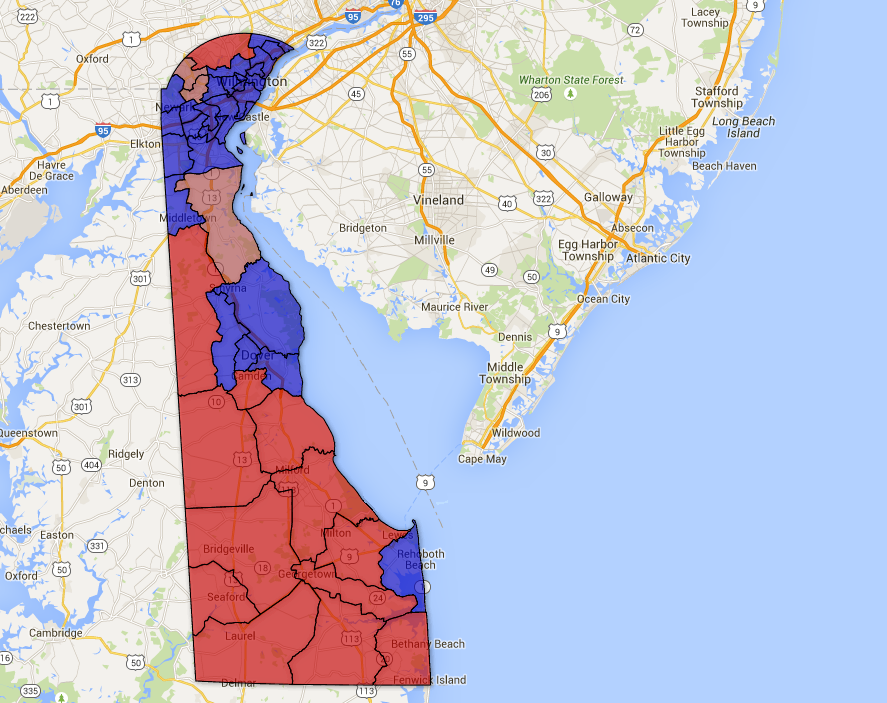 In the last Redistricting of 2011, one new Representative District (the new 20th RD) and one new Senate District (the new 6th SD) were added downstate to reflect the growing population there. And according to a story in last week’s Cape Gazette, we may be looking at a similar outcome this time, at least when it comes to Representative Districts. Republicans Steve Smyk and Ernie Lopez were elected to represent those new respective districts in 2012.

“There are some districts upstate that have 11,000 voters, so don’t be surprised when we close down a district upstate and move it down south, because that’s the only way we can fix this,” said Speaker of the House Rep. Pete Schwartzkopf[.]

Schwartzkopf said definitely one new seat in the House of Representatives will be allocated to the area, possibly two.

“It’s going to be very difficult, and there are going to be a lot of people upset,” he said. “I’m already trying to figure out where that thing will go. I don’t know how we’re going to do it.”

The General Assembly must pass a new district map for both the House and Senate by November 8, and it’s going to be a tight window to get those plans drawn and passed, since the full raw data for each of the Senate and Representative Districts from the U.S. Census Bureau will not be delivered to the General Assembly until some time in September.

If those numbers are correct, you can definitely see the need for ONE new RD downstate. But I have no idea where Schwartzkopf is coming up enough people for 2. And I have no idea why Schwartzkopf is referring to voters in a district when the correct criteria for drawing Census lines is total population rather than active registered voters. Boy, when he pals around with his Republican friends, Speaker Pete sure does adopt a lot of Republican ideas, and this time he has definitely taken to the idea that not every person counts.