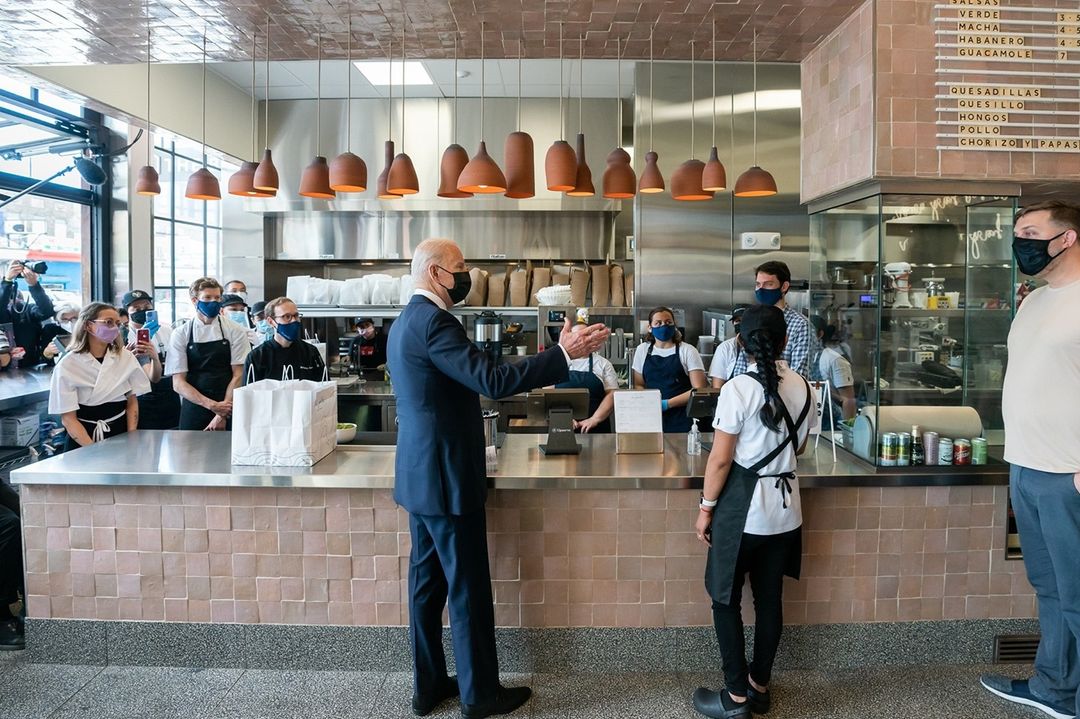 A new UC Berkeley/Los Angeles Times poll finds just 36% of registered voters in the state said they would vote to recall Gov. Gavin Newsom (D), the same percentage of support found in a survey in late January.

In comparison, 49% of voters oppose removing the governor from office.

However, Democratic voters polled “also overwhelmingly favored having a prominent Democratic replacement candidate on the recall ballot in case Newsom was ousted from office, putting them at odds with efforts by their state party and Newsom’s campaign to prevent that from happening.”

Caitlyn Jenner told CNN that she didn’t vote in the 2020 presidential election because she couldn’t “get excited” about Election Day. Said Jenner: “Out here in California, it’s like, why vote for a Republican president? It was Election Day. And I just couldn’t get excited about it. And I just wound up going to play golf.”

“Glenn Youngkin, the multimillionaire businessman who sought to cast himself as a political outsider with the best chance to challenge Democratic power, will represent Republicans in the race to become Virginia’s next governor,” the Richmond Times Dispatch reports.

“Fueled by his own fortune, Youngkin, former co-CEO of a global investment firm, used the biggest war chest in the race, a limited public record and in-person campaigning to overcome tough odds. He will become the face of the state party as it heads into a pivotal November election, when the GOP will try to end its banishment from the Executive Mansion since Bob McDonnell left office in 2014.”

Youngkin “will be a fascinating test case ahead of next year’s midterm elections: Can a wealthy GOP outsider — who has embraced Trump, campaigned on election integrity and declined to say that Joe Biden’s 2020 victory was legitimate — win in blue Virginia, especially in its suburbs?,” NBC News reports.

“Or now that Trump is out of the White House and off of Twitter, are Democratic and suburban voters less fired up in Virginia than they were four years ago?”

Youngkin prevailed last night with 55% of the ranked-choice vote to win the Virginia GOP’s nomination for Governor. He led following every round of balloting and beat much more established and well-known opponents in the process. For many outside observers, the expectation was that the heavily Trump-aligned state Sen. Amanda Chase would perform well, but she finished a distant third.

That result shouldn’t have been too much of a surprise: a reading of the last five years suggests that the GOP’s activists would rather their leaders be Trump-like (skilled in perpetuating the lie) rather than Trumpist (be willing to jump into the abyss for the lie).

The distinction is crucial: it’s the difference between the person who sells the Kool-Aid and the person who will pay good money to drink it. Consider Youngkin. He’s an extremely wealthy financier with almost no political blueprint in Virginia before this race.

Excluding the last six months, Youngkin had only donated four times for a total of $1,150 to state candidates in Virginia dating back to 2009. His major opponents–whatever their flaws–had put in a lot of time and effort into being a Virginia Republican.

But Youngkin met the Trump standard far better than his opponents–he has no long-term policy/political positions and no track record, but he was willing to mouth conspiracy theories on Tucker Carlson and root his candidacy in grievance politics.

He’s perfect for the fly-by-night nature of today’s GOP. It’s why Trump endorsed Youngkin immediately. After all, the Chases of the world are the marks in the GOP–useful, but not worth promoting to management. The Youngkins of the world, however, sustain the enterprise and make it hum.

A New York Times editorial: “All of the candidates in the June 22 Democratic primary are concerned with the welfare of their city and have thoughtful ideas about how to better it. It is Kathryn Garcia who best understands how to get New York back on its feet and has the temperament and the experience to do so. Ms. Garcia has our endorsement in perhaps the most consequential mayoral contest in a generation.”

“Voters could be forgiven for knowing little about Ms. Garcia. The pandemic has, to an alarming degree, hustled the hustings out of the neighborhoods and onto Zoom. The early polls in the race show that simple name recognition can have a big impact — on the early polls. Many primary voters say they haven’t made up their minds. So we’d like to help them.”

FiveThirtyEight: “Georgia is hardly the only state that’s made it harder to vote this year. Republican lawmakers have now enacted new voting restrictions in a total of 11 states — Arkansas, Florida, Georgia, Idaho, Indiana, Iowa, Kansas, Kentucky, Montana, Utah and Wyoming.”

“As we wrote in March, Republican state legislators — inspired by Trump’s baseless claims of voter fraud — have introduced hundreds of bills this year that would make it harder to vote. Based on the latest data from the Brennan Center for Justice and our own research, at least 404 voting-restriction bills have now been introduced in 48 state legislatures. What’s more, nearly 90 percent of them were sponsored primarily or entirely by Republicans.”

“But Orthodox Jews have been trending in the opposite direction, becoming as solidly Republican as non-Orthodox Jews are solidly Democratic. In the run-up to the 2020 presidential election, 75% of Orthodox Jews said they were Republicans or leaned Republican, compared with 57% in 2013.”

Jonathan Bernstein: “The big thing to know is that rising partisan polarization means that congressional midterm elections are increasingly nationalized votes on the popularity of the incumbent president — which means that individual candidates, whose importance has always been overrated, are now less important than ever.”

“The bottom line is that contested 2022 primaries are unlikely to be significant problems for either party as long as party actors from all sides accept the nomination winner. And that some internal arguments are healthy for the party, as long as they can be resolved in time for the general election.”

“Sen. Ted Cruz has plowed more than $240,000 into Facebook advertising since the platform started accepting political ads again two months ago. The only sitting senator who has spent more is Sen. Raphael Warnock (D-Ga.), who forked over $335,000 for ads on the social media giant,” Politico reports.

“Republicans say the approach will help Cruz raise dollars online and cultivate and collect email addresses of small dollar donors. And while the investment could pay off in what’s likely to be an expensive Senate re-election bid — Cruz’s 2018 race against Beto O’Rourke was the second most expensive of the cycle, according to the Center for Responsive Politics — it also could serve the Texas Republican well if he decides to run for president again, which Cruz has said he hoped to do.”

Bloomberg: “Republicans aiming to retake the U.S. House next year will have to defend the party’s pandemic record, especially in Sun Belt districts that stand out for their grim death tolls or lackluster vaccinations.”

“Forty-seven Democrat-held districts and 21 Republican seats are at the center of the fight. High Covid-19 death rates or low vaccine penetration stand to be issues in around 20 of them, 15 to the potential advantage of Democrats. While voters’ memories are often short, none have been through a combined public-health, economic and political crisis in such a short time.”

“Whatever lessons they take will determine whether Democrats — who as of Tuesday will have a seven-seat margin in the 435-member body — can avoid the usual midterm setback for a new president’s party.”

NEW YORK CITY MAYOR — The Hotel Trades Council has announced that it will spend $2 million on ads and get-out-the-vote-efforts to support Brooklyn Borough President Eric Adams and other endorsed downballot candidates in the June 22 instant-runoff Democratic primary.

The union has also released a survey from Honan Strategy Group that shows Adams edging out 2020 presidential candidate Andrew Yang 15-14, with nonprofit head Dianne Morales and city Comptroller Scott Stringer at 12% and 10%, respectively. In a hypothetical two-person matchup, Adams leads Yang by an identical 39-38 margin.

The survey was in the field April 24 to May 3; on April 28, in the midst of this time, Stringer was accused of sexual assault. The survey also asked a number of issue questions, including whether respondents would prefer to vote for “the most progressive candidate” or “the most moderate and centrist candidate,” before it got to the horserace.

Clare Malone: “Yang’s surprising dominance hasn’t just been luck. He has cannily deployed his fame, charisma, and hustle, bringing his very modern celebrity to a field otherwise low on name recognition and charm.”

“But another part of his success, perhaps more central than most voters realize, must be credited to his team of advisers and close supporters. Many of the city’s most well-connected, savviest strategists have bet on Yang, and in less than two months, eight years after rejecting the legacy of Bloomberg for someone defiantly to his left, New York may very well elect an heir to the billionaire ex-mayor’s worldview.”

White House chief of staff Ron Klain warned that President Joe Biden should not “underestimate” the chances of former President Donald Trump retaking the presidency in 2024, Insider reports.  Said Klain: “I wouldn’t want to estimate or underestimate Donald Trump as an opponent if he chooses to run.”

Dan Balz: “The British results in the working-class constituency election were a reminder that cultural and economic issues resonate in what was once Labour territory and that urban elites have difficulty connecting in those places. Republicans are counting on cultural issues to help pave the way to victories in the 2022 midterm elections, one reason they have seized on immigration and the southern U.S. border. Democrats should take notice.”

Washington Post: “Seated at the tables are several dozen people, mostly Republicans, who spend hours watching ballots spin by, photographing them or inspecting them closely. They are counting them and checking to see if there is any sign they were flown in surreptitiously from South Korea. A few weeks ago they were holding them up to ultraviolet lights, looking for a watermark rumored to be a sign of fraud.”

“This is Arizona’s extraordinary, partisan audit of the 2020 election results in the state’s most populous county — ground zero for former President Donald Trump and a legion of his supporters who have refused to accept his loss in Arizona or in other battleground states. These ballots have been counted before and certified by the Republican governor. Much of the country has moved on.”

ATLANTA MAYOR — Incumbent Keisha Lance Bottoms’ surprising retirement decision will likely set off a crowded race to succeed her, but two well-funded candidates were already competing in the November nonpartisan primary before the mayor made her Thursday announcement.

City Council President Felicia Moore said Friday that her campaign had raised about $500,000 and had $418,000 in the bank; attorney Sharon Gay, meanwhile, didn’t reveal her own cash-on-hand totals, but she said she took in $208,000 from donors and self-funded another $210,000. Gay, who serves as managing partner of the Atlanta office of the multinational law firm Dentons, doesn’t appear to have announced she was in before Bottoms retired, but she put out a statement afterwards making it clear she was indeed running.

Meanwhile, a few more local politicians are expressing interest in joining what’s now an open seat race. Former state senator Vincent Fort, who took fifth place in the 2017 mayoral contest, confirmed he was thinking about another bid, while the Atlanta Journal-Constitution writes that Fulton County Commissioner Khadijah Abdur-Rahman is interested as well. Abdur-Rahman’s election last year made her the first Muslim woman to win office in Georgia, and she’d again make history if she were elected mayor.

The AJC also mentions City Councilman Andre Dickens as a possible contender, while the local NBC affiliate speculates that former Rep. Kwanza Hall could get in. Hall, who was a city councilman at the time, took seventh place in the last mayoral contest, but he went on to win a 2020 all-Democratic runoff for the final month of the late Rep. John Lewis’ term in the 116th Congress.