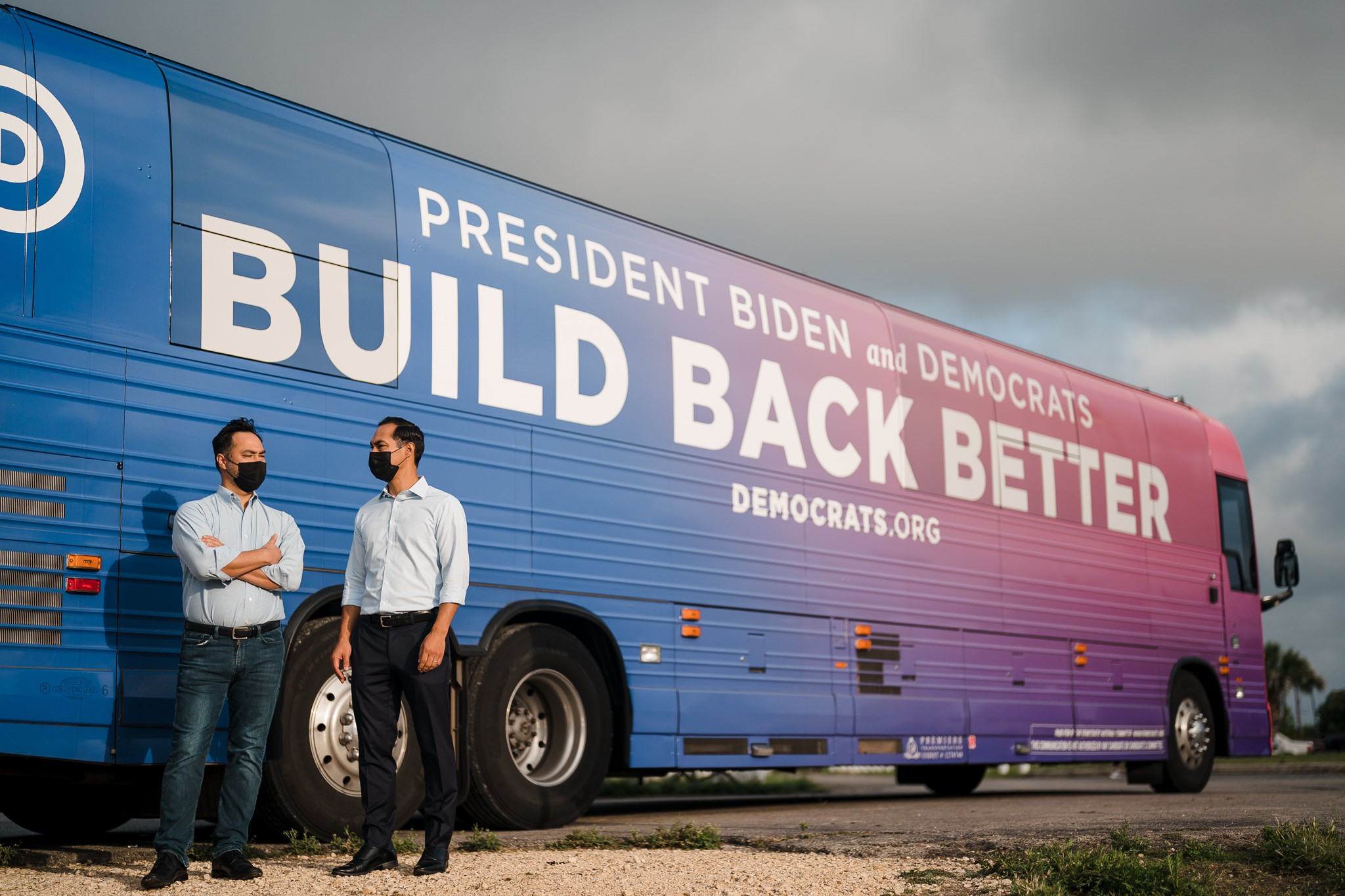 A new Suffolk University poll in California finds respondents saying they’ll vote against recalling Democratic Gov. Gavin Newsom by a 58-41 margin, which makes this one of his best showings in recent surveys. Suffolk also shows conservative radio host Larry Elder with 40% of the vote in the race to replace the governor while no one else breaks 5%, but that question would only matter if this poll is utterly wrong and a majority voted to oust Newsom on Tuesday.

The Los Angeles Times has a good look at how the California recall campaigns are pouring millions of dollars into online ads.

“Nearly two-thirds of the ads from groups backing Newsom or Elder appeared only for people using the sites in certain ZIP Codes. The group Stop the Republican Recall of Governor Newsom has run ads mainly on the coast, in densely populated Democratic strongholds, while Elder’s campaign committee has opted for inland areas where Republicans are more common.”

Newsom, meanwhile, narrates a commercial where he extols viewers for their pandemic sacrifices. “Now I’m asking you as Californians one more time,” the governor says, adding, “Republicans want to take us backwards with the Sept. 14 recall. They’ll eliminate vaccine mandates for health and school workers on day one, threatening school closures and our recovery.”

Larry Elder (R) told reporters that he believes “there might very well be shenanigans” in the election to recall California Gov. Gavin Newsom, continuing the baseless GOP effort to undermine elections by suggesting wrongdoing, CNN reports.

Washington Post: “Trump has placed several calls over the past week to some family members of the 13 service members killed in an Islamic State-Khorasan terrorist attack during the withdrawal. Several have invited him to attend the funerals, and he has suggested he may try to do so.”

“Trump and his allies have seen the calamitous end to the war in Afghanistan as a potent political opportunity as he weighs a potential 2024 reelection bid — even though Trump himself advocated for the withdrawal, negotiated with the Taliban before leaving office and urged Biden to leave even sooner.”

“Word of the protective orders has been quietly simmering in political and media circles for months, but Bartos made them public for the first time in an interview Tuesday. He planned to release a memo Wednesday on the matter and why it should steer Republicans away from Parnell.”

“The highly personal line of attack from Bartos came days after Parnell secured a coveted endorsement from former President Donald Trump in the Republican primary.”

It’s not clear what Laurie Parnell accused her husband of; the two are currently involved in a divorce and custody battle. The 2017 PFA was withdrawn after the couple reached an agreement 13 days later. Tamari writes that the following year, according to documents provided by Parnell’s campaign, the judge “denied a full protection order after a hearing in the 2018 case.” The story adds, “Sean Parnell also sought a protection order against his wife in 2018, on the same day a PFA was issued against him. He accused her of physical and mental abuse but was denied a protection order.”

The committee didn’t mention what it was probing, but, as Roll Call’s Chris Marquette writes, each member has previously attracted media coverage for unrelated alleged violations. Last year, the Minnesota Reformer reported that Hagedorn used $110,000 in taxpayer money to pay a company owned by one of his staffers to print constituent mailers, and that his office had also given $340,000 to another firm called Abernathy West for a similar job. Malinowski, meanwhile, has faced scrutiny in recent months over his failure to disclose stock trades.

Kelly, for his part, was the subject of a Pittsburgh Post-Gazette report last year that revealed he’d urged the Trump Department of Commerce to launch a probe into foreign steel imports that threatened Cleveland-Cliffs, a steel company located in his district. The congressman’s wife, Victoria Kelly, purchased between $15,000 and $50,000 worth of stocks in Cleveland-Cliffs days before the Department of Commerce investigation was announced, which the paper wrote “created a scenario in which Mr. Kelly’s spouse, Victoria Kelly, may have gained personally from the actions of his public office, Congressional ethics experts said in interviews.”

Finally, the Office of Congressional Ethics, which is separate from the Ethics Committee, said last month that it found Mooney improperly spent more than $40,000 in campaign funds on personal expenses, including on meals and trips to resorts.

Despite Donald Trump’s claim that Sen. Cynthia Lummis (R-WY) was also endorsing Harriet Hageman (R) in the GOP primary against Rep. Liz Cheney (R-WY), Lummis’s comment to the Washington Examiner indicated otherwise: “I’ll tell you, I’ve known Harriet Hageman for decades. She is a fabulous choice for President Trump — and I’m just leaving it at that. Take my statement at face value. That’s all I’m saying.”

The pollster finds that the race for governor is nowhere near as tight, though. Republican incumbent Mike DeWine outpaces Dayton Mayor Nan Whaley 46-27 and Cincinnati Mayor John Cranley 47-25, respectively.

MINNESOTA GOVERNOR — State Sen. Paul Gazelka announced Wednesday that he would seek the Republican nomination to take on Democratic Gov. Tim Walz, a move that came a week after Gazelka stepped down as majority leader.

The fledgling candidate also revealed that he would seek the state party endorsement ahead of the primary and would drop out (or, in the local parlance, “abide” by the party endorsement process) if someone else won it. It remains to be seen, though, if Gazelka, who is often described with terms like “mild mannered,” has the kind of appeal with the hard-core conservatives who tend to dominate GOP conventions.

In office, Gazelka has been a vocal opponent of abortion rights who also was a leader in the failed 2012 ballot measure to ban same sex marriage. He’s made use of his small majority to frustrate Walz’s agenda, including the governor’s pandemic policies. The Republican made sure to emphasize his opposition to Walz’s public health measures in his announcement, declaring, “He failed an entire generation of children by closing schools.”

State Democrats, meanwhile, responded to the senator’s launch by reminding the media about the infamous post-election party Gazelka threw. One of the attendees, state Sen. Jerry Relph, died of COVID-19 soon after, and his daughter publicly said that she believed he’d contracted the disease there. “I’m sorry, but celebrating holding onto the Senate in the middle of the pandemic? They were spending money on something like that and then putting people in danger,” said Dana Relph, adding that the event also endangered staffers and venue employees. Gazelka also didn’t disclose to his Democratic colleagues that he and other GOP members had tested positive in the days after that dinner.

But while Gazelka’s actions during the pandemic might not do him any harm with GOP delegates, he may not still be a natural fit for them. Political observers mused to the Minnesota Reformer in July that the then-majority leader may not run for governor because party “activists and donors are said to be lukewarm on his candidacy.” Reporter Ricardo Lopez explained, “Gazelka capitulated on a number of GOP priorities during the recent state budget negotiations, walking away with his top priority of tax cuts but giving up things like voter ID and the GOP effort to kill new tougher auto emission standards.”

The senator didn’t let those skeptics stop his campaign launch, but he’ll still need to prove he can win over conservative delegates. Gazelka may not be off to the best start, though: The Reformer’s J. Patrick Coolican noted he “announced in the Capitol Rotunda, which is nice, but it also merely serves to highlight his insider status, which may not be what the Republican base wants.”

Gazelka joins a race that includes fellow state Sen. Michelle Benson; former state Sen. Scott Jensen; dermatologist Neil Shah; and Mike Murphy, the mayor of the small community of Lexington. Jensen, a physician who has been banned from TikTok for spreading what the company called “misinformation on COVID-19 guidelines,” has spent months campaigning hard among the party activists who will determine who earns the party endorsement next year, which could give him a big early head start in what can often be an unpredictable process.

“That dramatic move could alter the political landscape of Nebraska’s only swing congressional district, which handed an electoral vote to Democratic President Joe Biden last November and elected a Democratic congressman in 2014.”

If this proposal goes through, the biggest losers will be Omaha’s television stations which run millions of dollars in political ads every two years.

The Cook Political Report has a new map to track which incumbents (or retiring incumbents’ districts) are most at risk in the redistricting process.

Punchbowl News: “Former President Donald Trump, who is still the leader of the Republican Party, is making his mark on 2022. To date, Trump has issued 37 endorsements for races up and down the ballot. These include ‘revenge endorsements’ against pro-impeachment Republicans; signs of support to safe Senate incumbents; potentially decisive picks in competitive swing-state primaries; and even boosts to the most local of candidates.”

“But one constant across the varied field of Trump endorsements? A colorful history and propensity for scandal — much like the former president himself.”

Advisers to former President Donald Trump are paying teenage boys — some of them as young as 14 — to post right-wing memes and other incendiary content on their Instagram pages, the HuffPost reports.

NORTH CAROLINA U.S. SENATOR — Former state Supreme Court Chief Justice Cheri Beasley’s allies at EMILY’s List have publicized a Democratic primary survey from Public Policy Polling that gives her a 33-24 lead over state Sen. Jeff Jackson. The release did not include any of the other candidates seeking the Democratic nod, including 2020 contender Erica Smith.

The Hill: North Carolina primary is a key test of Trump’s sway.

“Miami Mayor Francis Suarez (R) isn’t ruling out a potential presidential bid, saying that he believes Americans are ‘thirsting’ for a new generation of leadership in the White House,” The Hill reports.  Said Suarez: “I’ll be honest with you, I actually think the American people would want to see someone that’s a next-generation candidate, whether it’s me or someone else.”