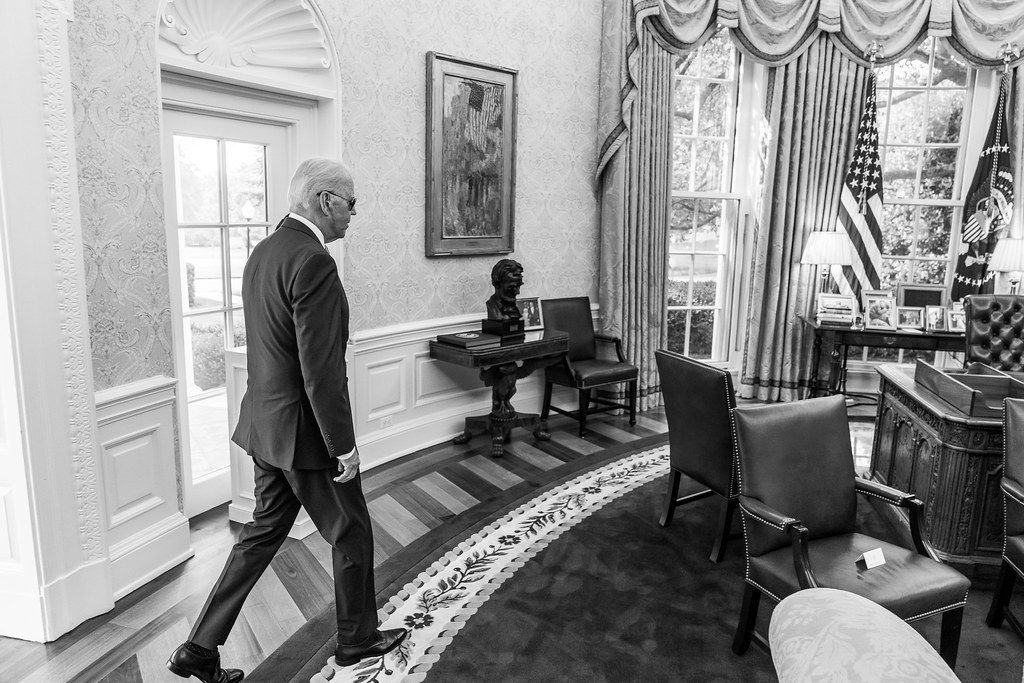 “Sen. Joe Manchin (D-WV) has privately warned the White House and congressional leaders that he has specific policy concerns with President Biden’s $3.5 trillion social spending dream — and he’ll support as little as $1 trillion of it,” Axios reports.

“Manchin also has committed to paying for any new spending with new revenue, which will limit the ultimate size of any final package.”

Don’t freak out. This is a negotiation. This is Manchin’s opening bid. Manchin is lowballing the White House and Democratic leaders: $1-1.5 trillion. Manchin wants it all paid for with new revenue, which is effectively another limit on the size of the bill.

The final numbers won’t be as big as Bernie Sanders wants or as small as Manchin wants. The devil will still be in the details: the revenue generators, the spending commitments, and the initiatives that get taken off the table entirely.

For his part, Biden doesn’t seem too worried about Manchin’s resistance to the bill, telling reporters yesterday that “Joe, at the end, has always been there” and that “I think we can work something out.”

The president also doubled down on his and Democratic leadership’s two-track plan for the bipartisan bill and budget reconciliation despite Manchin’s demand for a “pause” on passing reconciliation. “I’m comfortable with proceeding with the way we’ve been proceeding so far,” Biden said.

Punchbowl News: “Right now, it feels like Capitol Hill and the White House are in the midst of a giant game of Texas Hold ‘Em. All the key players — President Joe Biden, Speaker Nancy Pelosi, Senate Majority Leader Chuck Schumer, Senate Minority Leader Mitch McConnell and House Minority Leader Kevin McCarthy — just keep pushing more chips into the middle of the table. When challenged, they raise. No one is backing off an inch, at least not publicly.”

“How this all ends up is hard to predict right now, but it’s fascinating — and a little scary — to watch these senior party leaders play out their hands.”

“House Democrats are privately clashing with their Senate Democratic counterparts and the White House over hundreds of billions of dollars in new spending on health care programs included in the $3.5 trillion reconciliation package, according to multiple Democrats sources close to the talks. Several key House committees are slated to begin marking up the package tomorrow,” Punchbowl News reports.

“The intra-party dispute centers around permanently funding the Affordable Care Act — Obamacare — as well as potentially expanding both Medicare and Medicaid. The stakes of this fight, politically and substantively, are huge, as the reconciliation package is the centerpiece of the Democratic agenda heading in 2022.”

“The internal Democratic battle over health care is just one of the many challenges Democratic congressional leaders and the White House are struggling with in drafting the enormously complex package.”

“President Biden will address the nation on Thursday, the White House said, laying out a ‘six-pronged strategy’ to combat the coronavirus pandemic throughout the fall,” Yahoo News reports.

“The speech will likely mark a stark departure from the upbeat announcements of last spring, as vaccination rates rose and infection rates declined.”

Brian Stelter: “An unvaccinated minority that doesn’t watch the news or trust the news is putting the vaccinated majority at undue risk. There’s no way around that reality.”

Said Dr. Paul Offit: “It’s the unvaccinated that’s spreading the virus in this country that’s infecting others. And that should be what we take on — and we should talk about it every minute of every hour of every day — because we are never going to get on top of this pandemic until we do that.”

“At a time when the delta variant’s summer surge has renewed the nation’s divisions over coronavirus vaccines, Rep. Jim Jordan (R-OH) on Monday said mandates enforcing vaccination do not reflect what it means to be American,” the Washington Post reports.

“But critics panned Jordan’s Labor Day message as being off — way off — by nearly 2½ centuries. George Washington, the commander in chief of the Continental Army in the Revolutionary War, made the bold decision in 1777 to require that his troops be immunized after a smallpox outbreak devastated the nation.”

“In addition to redrawing the state’s political boundaries — a decennial responsibility of the Legislature — Abbott tasked lawmakers with allocating $16 billion in federal coronavirus relief funds and revisiting two priority measures that were unsuccessful this summer: limiting participation of transgender student athletes in school sports and prohibiting vaccine mandates.”

Texas Tribune: “The bills about transgender student athletes and COVID-19 mandates will likely turn up the heat on an already contentious 30-day session.”

“The first-term Republican governor Tuesday signed a directive ordering the South Dakota Department of Health to create rules prohibiting the use of telemedicine in the process of terminating a pregnancy within the state and restricting when and how chemical abortion drugs are prescribed or provided.”

“The U.S. economy is facing a slowdown in September, rather than the takeoff once hoped for,” the Wall Street Journal reports.

“Earlier this summer, many economists saw the week of Labor Day as the moment when the economic recovery would kick into high gear. Their expectation was that widespread vaccination would ease labor shortages. Schools and offices would reopen, which would mean a comeback for local businesses reliant on office workers. Travel would rebound. Stevie Nicks would be back on tour.”

“Instead, the rise of Covid’s Delta variant has the nation tapping the brakes.”

“Israel, once a front-runner in the global race to move on from Covid-19, is now one of the world’s biggest pandemic hot spots,” Bloomberg reports.

“The country that was once predicted to be the first to vaccinate its entire population had the highest per-capita caseload of anywhere in the week through Sept. 4, according to figures compiled by Johns Hopkins University. Its world-beating inoculation rate, meanwhile, has tumbled down the league table.”

Donald Trump will spend the 20th anniversary of the Sept. 11 terror attacks cashing in on a boxing match in Florida, offering “alternative” commentary to this weekend’s match between Evander Holyfield and Vitor Belfort for fans who pay $49.99, the HuffPost reports.

Washington Post: “President Biden on Tuesday warned of a ‘code red’ moment on climate change as he toured two northeastern states ravaged by the remnants of Hurricane Ida, while his administration prepared to ask Congress for billions in federal aid to respond to last week’s storm and other natural disasters.”

“The Biden administration is asking for billions of dollars for ‘urgent’ extreme weather recovery efforts and the resettlement of Afghan refugees in its proposal to keep the government funded past September 30,” CNN reports.

Politico: “Those special requests will increase the political pain for any lawmaker planning to oppose the funding patch Congress needs to pass this month to keep government agencies open beyond Sept. 30. Top Democrats have also been flirting with the idea of adding action on the debt limit to that package, a move that would further squeeze Republicans who have pledged zero cooperation as the Treasury Department nears a breaking point on the nation’s borrowing limit.”

“The combination would present a triple threat, daring GOP lawmakers to go on record in opposition to aid for disaster-hit communities, staving off a debt default that could throw financial markets into chaos and preventing a government shutdown.”

Wall Street Journal: “At the close of the 2020-21 academic year, women made up 59.5% of college students, an all-time high, and men 40.5%, according to enrollment data from the National Student Clearinghouse, a nonprofit research group. U.S. colleges and universities had 1.5 million fewer students compared with five years ago, and men accounted for 71% of the decline.”

“This education gap, which holds at both two- and four-year colleges, has been slowly widening for 40 years. The divergence increases at graduation: After six years of college, 65% of women in the U.S. who started a four-year university in 2012 received diplomas by 2018 compared with 59% of men during the same period, according to the U.S. Department of Education.”

Reuters: “A migrant caravan of around 400 people, including many children, set off from the southern Mexican city of Tapachula for the United States on Saturday, just a couple of days after security and migration officials dispersed another large group.”

“Vietnam jailed a man on Monday for five years for breaking strict COVID-19 quarantine rules and spreading the virus to others,” Reuters reports.

“China’s government banned effeminate men on TV and told broadcasters Thursday to promote ‘revolutionary culture,’ broadening a campaign to tighten control over business and society and enforce official morality,” the AP reports.  The television regulator said broadcasters must “resolutely put an end to sissy men and other abnormal esthetics.”

“Russia’s Vladimir Putin is orchestrating a deliberate energy supply crisis in Europe by restricting the seasonal flows of pipeline gas, preventing the region rebuilding its severely depleted inventories fast enough before the onset of winter,” the Daily Telegraph reports.

“El Salvador rushed to iron out snags on Tuesday after becoming the first country to adopt bitcoin as legal tender,” Reuters reports.

“The country’s adoption of Bitcoin is being seen as a real-world experiment, with proponents saying it will lower commission costs for billions of dollars sent from abroad, while critics are warning it may fuel money laundering.”

Axios: “While a 17% daily swing is far from unprecedented for bitcoin, it’s not the kind of thing most citizens want from their currencies. Neither is having a payments mechanism that can be unplugged by the government at will.”

“More than 100,000 Brazilians took to the streets in nationwide rallies Tuesday in support of President Jair Bolsonaro, a show of force for the right-wing leader ahead of elections next year in which he will face a surging leftist challenger,” the Wall Street Journal reports.

“Draped in Brazilian flags, supporters of the former army captain filled São Paulo’s main avenue and the streets of more than 100 other cities to disparage people Mr. Bolsonaro considers enemies and political opponents. They demanded the jailing of communists and the closure of Congress.”

“Many had particularly critical remarks for the Supreme Court, which has launched investigations into the right-wing leader and his allies.”