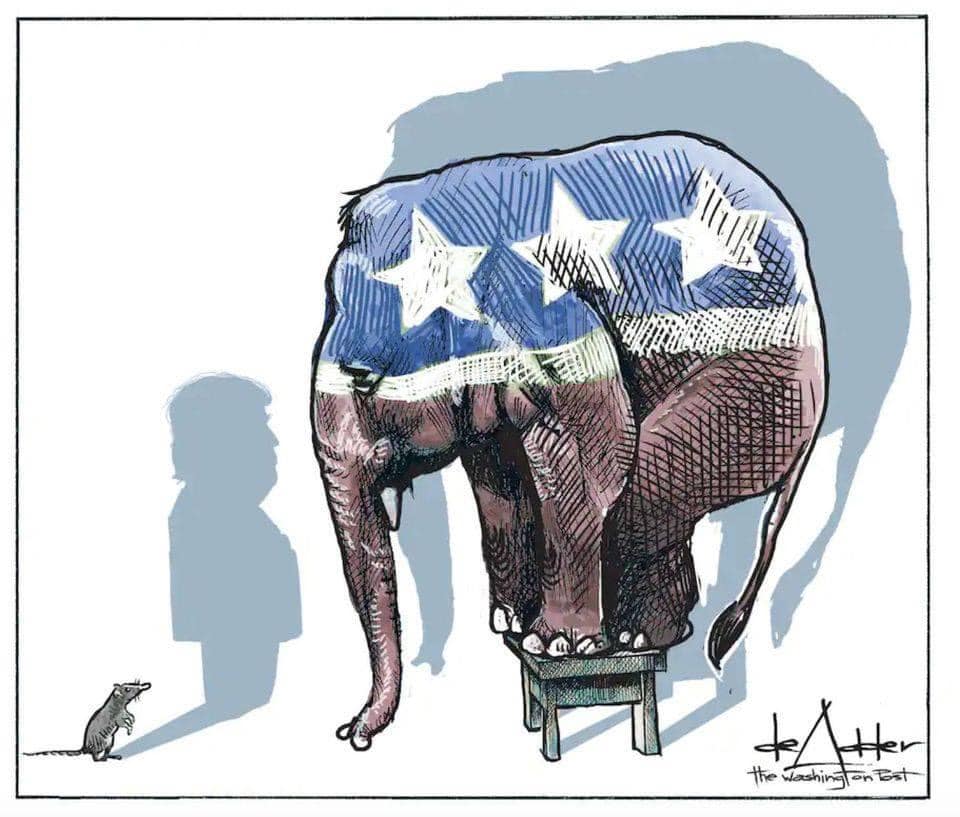 Harry Enten: “Take a look at Gallup polling during the Biden presidency. Aggregating all the polls it has conducted so far (in order to get a large sample size), Biden’s approval rating with Hispanics stands at 72% compared to a 55% overall approval rating.”

“That 72% is a clear improvement from how Biden did in the election with Hispanics. Biden won 65% of Hispanics, according to the network exit polls. An estimate from the Democratic firm Catalist (which lines up well with what we saw in pre-election polls) had Biden taking 61% of Hispanics. So this Gallup data suggests Biden’s support may be up anywhere from 7 to 11 points from the election.”

A new survey finds that 51% of Europeans would like to see some of their members of parliament replaced by artificial intelligence algorithms. In contrast, 60% of Americans would oppose such a move.

A new Yahoo/YouGov poll reveals that 73% of Republicans believe that left-wing protestors are to blame for the January 6th attack on the Capitol because they wanted “to make Trump look bad.”

A new Economist/YouGov poll finds that 32% of Americans believe it to be a mistake or are unsure if it was the right decision to send troops to fight in World War II.

Arizona Republic: “The Arizona Senate, apparently not satisfied with one recount, is close to signing a deal for its second review of Maricopa County’s 2020 general election ballots.”

“The effort would expand the ongoing audit and is expected to use a new and largely untested technology.”

Meanwhile, a new HighGround poll finds Arizonans oppose the auditing of Maricopa County ballots from 2020, 55% to 40%.

Most analysts assume that Democrats will lose seats in the 2022 midterms — and could easily lose control of the House, Senate or both. Since World War II, the president’s party has lost an average of 27 House seats in midterm elections.

But these really are unprecedented times in modern American history.

Nate Silver makes some good points on this:

One of the reasons Sen. Mitch McConnell (R-KY) torpedoed the commission to investigate the January 6 insurrection is that he doesn’t want Republicans talking about Donald Trump and “stolen elections” next year. McConnell saw how that sabotaged GOP turnout during the Georgia Senate runoffs in January. And he unexpectedly lost control of the Senate. It’s pretty clear already that Trump will be a factor in the midterm elections. But it’s not at all clear that helps Republicans.

Jonathan Bernstein: “After 12 quiet years for the presidential-nomination calendar, we may soon be in for a serious fight. The Nevada legislature on Monday passed a bill that would kick off the nomination process in that state, ahead of Iowa and New Hampshire.”

“Easier said than done, of course. New Hampshire will reschedule its first-in-the-nation primary ahead of any other state’s, and Iowa will schedule its first-in-the-nation caucuses eight days before that. Unless the federal government acts — and that’s unlikely — the national political parties have very limited ability to regulate the process. They can penalize states for violating their guidelines, and they can penalize candidates for campaigning in those states. But the only real leverage the parties have is refusing to seat a state’s delegates, and no one cares about delegates in the early caucus and primary states; the reason candidates campaign in those states is because of the enormous publicity the early contests receive, and no one can order the media to simply ignore such an event.”

“As Donald Trump cannonballs back into national headlines more scandal-ridden than ever, it turns out that Republicans aren’t the only ones who don’t want to fixate on the former president. Many House Democrats feel the same way,” Politico reports.

“With their fragile House majority on the line, many Democrats are imploring their colleagues not to take the Trump bait after last November’s referendum on the ex-president ended up costing their party a dozen seats. Instead, those Democrats are eager to deploy a policy-heavy playbook to help stave off a potential midterm whipping — and are careful to avoid putting Trumpism on the ballot next November, too.”

“Bannon, the former Breitbart News executive and one of the architects of Trump’s Make America Great Again movement, has increasingly leveraged his “War Room: Pandemic” podcast into a kind of proxy primary. Ambitious Republicans are flocking there for the chance to demonstrate loyalty to Bannon’s former boss and pitch themselves to Trump’s voters — and, more indirectly, to Trump himself.”

A handful of Donald Trump campaign alumni have formed a new group to try to unseat the 10 Republican House members who crossed party lines to vote to impeach the former president earlier this year, Axios reports.

Politico: “It’s the latest chapter in a slow-building 2024 shadow primary. [With 2024 GOP Hopefuls] throwing themselves into House races, potential candidates are currying goodwill with lawmakers and activists, testing out campaign themes and introducing themselves to voters around the country who will eventually determine the party’s next presidential nominee.”

“And there is another reason why House races are attractive playground for those looking to run: It’s a way to put themselves out there without poking the eye of former President Donald Trump, who has made clear that he’s interested in a comeback bid.”

“At the least, strong campaigns from Black women so early in the midterm cycle stand out compared to previous years.”

“Facebook will resume its political donations after more than a four-month pause but will keep the ban in place for members of Congress who voted against certifying the results of the election ahead of the insurrection at the Capitol,” The Hill reports.

Nate Cohn: “New York City will use a ranking system in the mayor’s race for the first time. A phenomenon known as ‘ballot exhaustion,’ when every candidate ranked by a voter has been eliminated, could prove decisive.”

Walter Shapiro: “Less than four weeks before the June 22 mayoral primary, none of the eight leading Democratic candidates has shown an ounce of the charisma, stature, or sheer force of personality that mayors once used to dominate the headlines—and the city. Most of the leading contenders are competent, to be sure, but it is hard to call any of them inspiring. Even the supposed dynamic outsider in the race, Andrew Yang, has accomplished little in life other than having his presidential campaign peak with an eighth-place showing (2.8 percent of the vote) in the 2020 New Hampshire primary.”

ALABAMA U.S. SENATOR — CNN: “Katie Boyd Britt, the president and CEO of the Business Council of Alabama, is expected to jump into the Alabama Senate race next month as some Republicans in the state seek an alternative to Rep. Mo Brooks, who has already earned former President Donald Trump’s endorsement.”