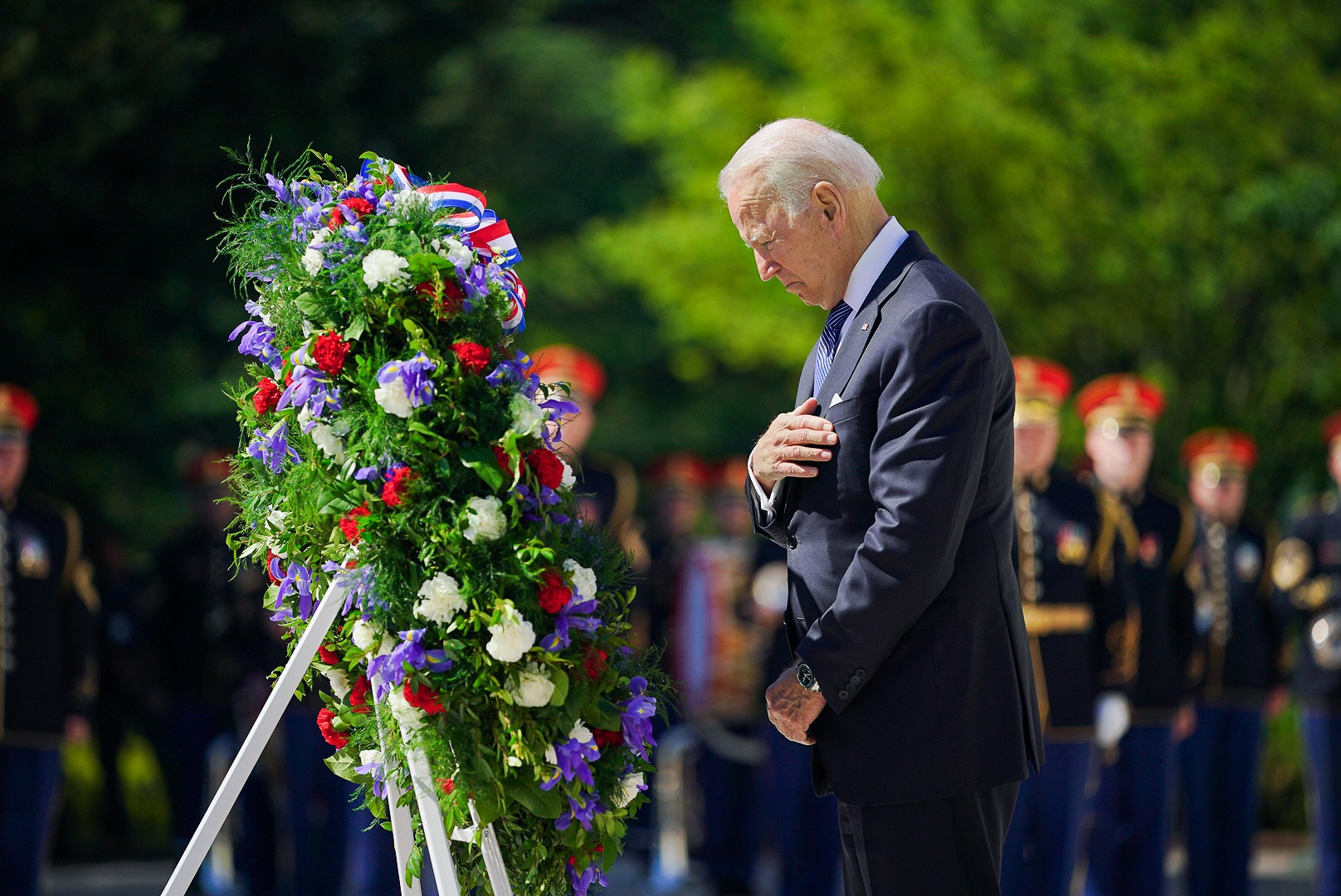 Associated Press: “President Joe Biden marked his first Memorial Day weekend as commander in chief by honoring the nation’s sacrifices in a deeply personal manner as he paid tribute Sunday to those lost while remembering his late son Beau, a veteran who died six years ago to the day.”

“As a cold rain fell, Biden made his annual appearance at the commemoration in New Castle, not far from his Wilmington home, a day before he planned to do the same at Arlington National Cemetery on the official observance.”

Associated Press: “His face tight with emotion, Biden walked up to the wreath, cupping it in his hands in silent reflection, then making the sign of the cross. His eyes were wet. The gathered dignitaries and military families were hushed and solemn; the chattering of cicadas loud.”

“In remarks that followed, Biden called on Americans to commemorate their fallen heroes by remembering their fight for the nation’s ideals.”

“He focused much of his speech on the importance of democracy, saying it thrives when citizens can vote, when there is a free press and when there are equal rights for all.”

CNN: “Since taking office four months ago, the President has spent more weekends away from the White House than he has stayed there, almost three times as many. Counting this Memorial Day weekend, Biden has been in Wilmington nine weekends and passed five weekends at the presidential retreat, Camp David, in rural Maryland. The numbers far exceed any modern president’s weekends off-campus at this point in his tenure.”

“Biden’s instinct — sometimes last-minute, say those familiar with his schedule — is to get away from it for a weekly breather. One person said it’s the escapism aspect of getting away from ‘the office’ that drives him to seek another location.”

“The Biden administration said Sunday that talks over a $1.7 trillion infrastructure package would need to show a ‘clear direction’ toward agreement by the time Congress returns from recess in early June, signaling that Democrats might be preparing to go it alone on a broad plan to rebuild roads and bridges, expand broadband service and create programs to help care for the elderly and disabled Americans,” the Wall Street Journal reports.

“Transportation Secretary Pete Buttigieg said President Biden and members of his team would continue negotiating privately this week and said the talks with Republican lawmakers were encouraging. But he identified the return of Congress on June 7 as when the talks would need to indicate an endpoint.”

Said Buttigieg: “I think we are getting pretty close to a fish-or-cut-bait moment.”

Playbook: “It certainly sounds like Republicans want to make a deal on infrastructure. At least, that’s the clear takeaway from the Washington Post’s look into White House negotiations with Senate Republicans, who were eager to lay the compliments on thick when talking about President Joe Biden.”

“At one point during the Oval Office negotiating session, it seemed President Biden and a half-dozen GOP senators chasing an infrastructure deal had landed on a workable figure: $1 trillion,” the Washington Post reports.

“That number was dramatically scaled back from the White House’s initial $2.3 trillion vision for rebuilding the nation’s infrastructure, yet still far higher than the Senate Republicans’ opening bid. Some of the GOP senators in the room were unsure how they would reach the $1 trillion mark.”

“Then Sen. Roy Blunt (R-Mo.) asked Biden: Would it matter if that spending were spread out over five years, or eight? The president indicated to the senators that it wouldn’t.”

“The Republicans — some of whom had taken chocolate chip cookies, wrapped in a presidential seal, for the road — left the Oval Office believing that Biden would be satisfied with a framework that would spend $1 trillion over eight years and that it could include existing spending plans.”

“The longest-serving prime minister in Israeli history, Benjamin Netanyahu, faced the most potent threat yet to his grip on power Sunday after an ultranationalist power-broker, Naftali Bennett, said his party would work with opposition leaders to build an alternative government to force Mr. Netanyahu from office,” the New York Times reports. “If the maneuvering leads to a formal coalition agreement, it would be an uneasy alliance between eight relatively small parties with a diffuse range of ideologies. The prime minister’s post would rotate between two unlikely partners: Mr. Bennett, a former settler leader who rejects the concept of a sovereign Palestinian state and champions the religious right — and Yair Lapid, a former television host who is considered a voice of secular centrists.”

The Washington Post reports Netanyahu called the plan “the fraud of the century.”

CNN: “Beyond losing his role as leader of Israel’s government, Netanyahu faces perhaps an even greater threat if the new government is sworn in: an ongoing trial on charges of bribery, fraud and breach of trust.

“Netanyahu has denied all the charges, describing them as a media-fueled witch hunt against him. He insists he wants the case to run its course, confident it will crumble. But political analysts say that by staying in power, Netanyahu could avoid prosecution and possible jail time by appointing a new attorney general, or by influencing the appointment of certain judges who could affect his trial. Other critics of the Israeli leader say he wants to pass a new immunity law that would protect a sitting prime minister from being indicted.”

The HuffPost notes Flynn also insisted that he’s “not a conspiracy theorist,” but then declared: “Trump won! He won! He won the popular vote, and he won the Electoral College vote.”

She added: “Maybe a few prosecutors. But not Republicans.”

“The sweeping overhaul of Texas elections and voter access was poised from the beginning of the session to pass into law. It had the backing of Republican leaders in both chambers of the Legislature. It had support from the governor,” the Texas Tribune reports.

“Democrats who opposed the bill, chiding it as a naked attempt of voter suppression, were simply outnumbered.”

“But on Sunday night, with an hour left for the Legislature to give final approval to the bill, Democrats staged a walkout, preventing a vote on the legislation before a fatal deadline.”

Texas Gov. Greg Abbott (R) said he “would veto the section of the state budget that funds the Legislature, hours after a Democratic walkout killed his priority elections bill,” the Texas Tribune reports.

Said Abbot in a tweet: “No pay for those who abandon their responsibilities.”

New York Times: “A 46-page draft blueprint obtained by The New York Times maps out the Biden administration’s plans to significantly expand the legal immigration system, including methodically reversing the efforts to dismantle it by Trump, who reduced the flow of foreign workers, families and refugees, erecting procedural barriers tougher to cross than his ‘big, beautiful wall.’

“Divided into seven sections, the document offers detailed policy proposals that would help more foreigners move to the United States, including high-skilled workers, trafficking victims, the families of Americans living abroad, American Indians born in Canada, refugees, asylum-seekers and farm workers. Immigrants who apply online could pay less in fees or even secure a waiver in an attempt to ‘reduce barriers’ to immigration. And regulations would be overhauled to ‘encourage full participation by immigrants in our civic life.’”

Meanwhile, Axios: “Resuming the practice of so-called expedited removals for families could be a divisive move among some Democrats. It would shift the administration toward a more deterrence-based approach, used to different degrees by the past four presidents and embraced especially by the Trump administration.”

“A review of the expedited removal process by the Department of Homeland Security is due this week … Some advisers are recommending the tool as a way to deter prospective undocumented border crossers.”

“A Trump appointee serving on West Point’s advisory board has repeatedly spread a conspiracy that the Biden administration is bringing in non-White immigrants as part of a ‘grand plan’ to have them outnumber White Americans of European ancestry in the United States,” CNN reports.

“He also attacked women serving in the military in combat roles.”

“The ongoing Flint water case against former Gov. Rick Snyder (R) is relying on an investigative tactic so rarely used that some legal experts aren’t familiar with it,” the Detroit Free Press reports.

“Known as a one-person grand jury, the process is cloaked in secrecy.”

“It involves the appointment of a single judge to review evidence out of public view and decide whether charges should be brought. In contrast to the way most criminal charges are brought, using a one-person grand jury alters how evidence is turned over to defense attorneys and delays their ability to cross-examine witnesses.”

“Russia said on Monday it would send what it described as ‘uncomfortable’ signals to the United States ahead of a summit between the two countries’ leaders next month and announced it was beefing up its western border militarily,” Reuters reports.

“The comments came a day after President Joe Biden said he would press Russian President Vladimir Putin to respect human rights when the two leaders meet in Geneva on June 16.”

Said Russian deputy foreign minister Sergei Ryabkov: “The Americans must assume that a number of signals from Moscow … will be uncomfortable for them, including in the coming days.”

“Scientists have warned ministers that a third wave of coronavirus may have already begun in Britain, casting doubt on plans in England to lift all lockdown restrictions in three weeks’ time,” The Guardian reports.

“Vietnam is bracing for disruptions its tech manufacturing sector, the country’s economic engine and a vital cog in global supply chains, after authorities detected a new variant of COVID-19 with characteristics of both Indian and U.K. strains,” Nikkei Asia reports.

“The government has called for nationwide efforts to protect factories as two northern provinces home to industrial parks struggle to control outbreaks.”

Chicago Tribune: “Illinois Democrats are turning the spring session into a partisan tour de force. … For Republicans who looked at the January departure of Michael Madigan — the embattled state Democratic Party chair and the nation’s longest-serving House speaker — as an opportunity for a fresh start, the session has been a rude awakening.”

“With the General Assembly scheduled to adjourn Monday, top Democratic priorities are steadily advancing. On Friday, lawmakers sent Democratic Gov. J.B. Pritzker legislation to redraw Illinois’ legislative districts to the party’s favor for the next decade and redo state Supreme Court boundaries for the first time in nearly 60 years to try to keep their majority. … Meanwhile, Republicans largely have been shut out of negotiations over a new state budget and how to spend federal pandemic relief funds. They also have been unsuccessful in pushing stronger ethics proposals.”

New York Times: “The public may never know precisely what Mr. Trump and members of his administration did or said as a throng of his supporters stormed the Capitol while Congress met to formalize President Biden’s victory, threatening the lives of lawmakers and the vice president. The full story may never be revealed of why security officials were so unprepared for the breach of the building, supposedly one of the most secure in the nation, despite ample warnings of potential violence.”

“The extent of the role of Republican lawmakers closely allied with Mr. Trump in planning the Jan. 6 ‘Stop the Steal’ rally that spiraled into a brutal onslaught may remain unexplored.”

Meanwhile, lawyers for at least three defendants charged in connection with the violent siege tell the Associated Press that they will blame election misinformation and conspiracy theories, much of it pushed by Trump, for misleading their clients.