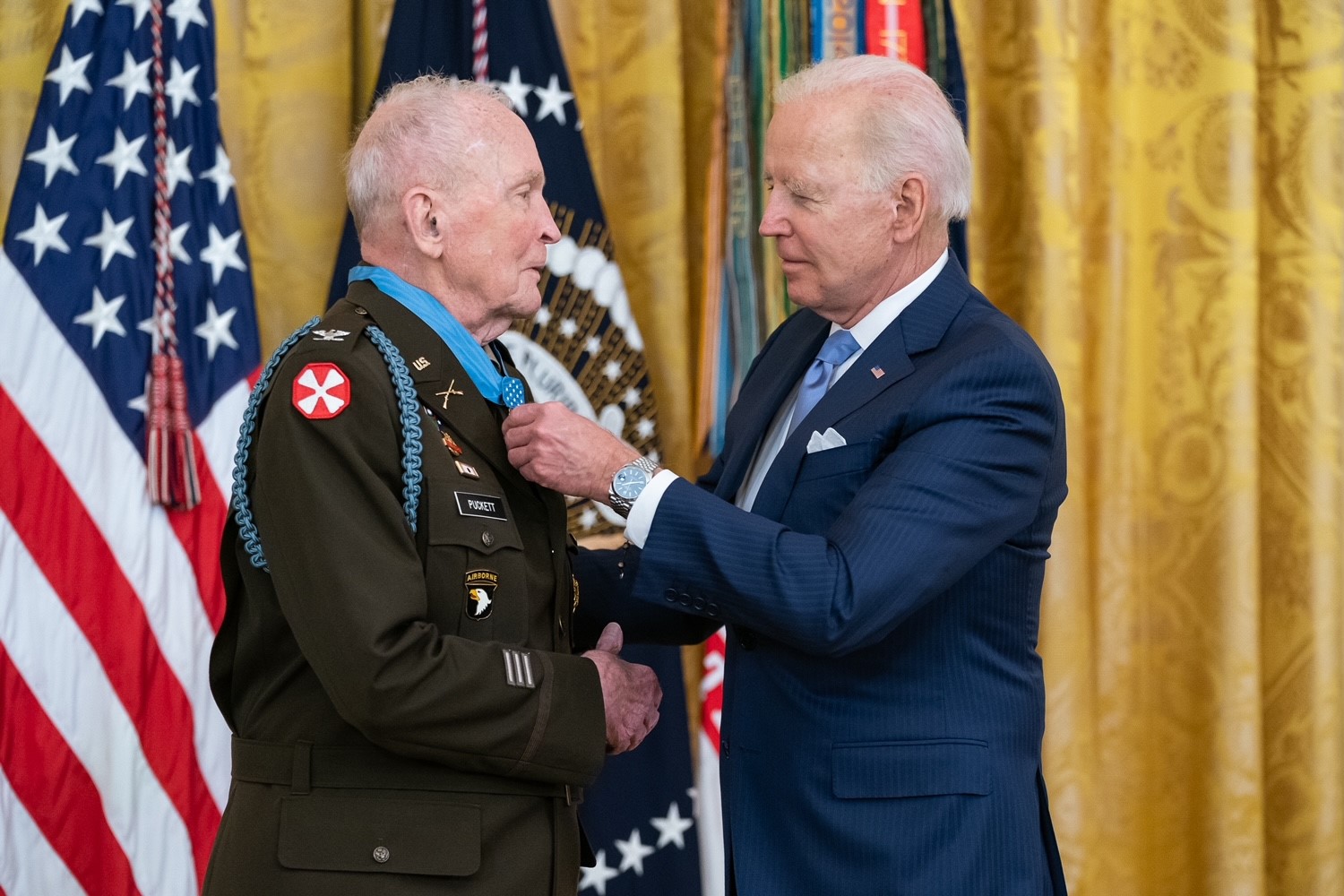 Stuart Rothenberg: “So, we have one party, the GOP, that is led by a bully who relies on cheap shots and untruths to keep his critics in check — and who has no respect for norms established since the birth of the republic. It’s a party that punishes Cheney but sees no reason to distance itself from the paranoid ramblings of Greene or Trump stalwart Michael Flynn.”

“Meanwhile, the Democrats head toward the midterms with one of their own in the White House and technical ‘control’ of both chambers of Congress — even though they really have little control given the 50-50 Senate and the hesitancy of a few Democratic senators to act unilaterally.”

“In other words, Democrats have the responsibility to deal with a range of crucial issues but lack the ability to do much, which in the past has tended to be a prescription for political defeat.”

Politico: “Before federal investigators were looking into Gaetz in an ongoing sex scandal, he was a top campaign adviser to DeSantis, who he met while both served in Congress. DeSantis at the time was a little-known GOP congressman in 2018 and needed help navigating Florida’s political landscape as he weighed whether to run for governor. Gaetz, 39, had deep connections to Florida’s political class because of his father, Don Gaetz, a powerful former state senator. Gaetz went on to play roles in DeSantis’ campaign and his early administration.”

“DeSantis’ ties to Gaetz could pressure the governor to answer difficult questions about whether he was aware of any alleged wrongdoing as he seeks a second term as governor and possibly the White House. As an adviser, Gaetz urged the governor to appoint several people who are also now ensnared in the federal investigation. Gaetz was also close friends with Joel Greenberg, the man at the center of a federal investigation into sex trafficking.”

Jennifer Chudy and Hakeem Jefferson: “The deterioration in support (for Black Lives Matter) is noteworthy because we do not merely observe a return to pre-Floyd opinion levels.”

“Rather, since last summer, Republicans and white people have actually become less supportive of Black Lives Matter than they were before the death of George Floyd — a trend that seems unlikely to reverse anytime soon.”

IDAHO GOVERNOR — Ammon Bundy, a conservative activist who is currently banned from the Idaho State Capitol Building after state troopers had to wheel him out of the capitol on an office chair because he refused to leave, will need to refile his paperwork to run as a Republican for Idaho governor in 2022, KTVB reports.

Two problems: Bundy isn’t registered to vote in Idaho, and neither is his campaign treasurer — Bundy himself.

PENCES MOVE BACK TO INDIANA — USA Today: “The Pences, who had been renting a house in suburban Virginia after leaving office in January, purchased a home north of Indianapolis… They are moving in this weekend, providing the native Hoosier a chance to launch a potential bid for the 2024 GOP presidential nomination from his home state.”

New York Times: “As a mayoral candidate, he is also testing the theory that in today’s politics, there is no such thing as bad publicity… More than once, people have compared him with Michael Scott of ‘The Office,’ the clueless enthusiast and tourist who praised his favorite authentic New York pizza slice, from Sbarro.”

“But here’s the thing: Michael Scott somehow managed to get and keep that managerial job at Dunder Mifflin. And people happily watched his character for years. Would you want him to be mayor of Scranton, much less the largest city in America? Maybe not. But beyond the vicarious laughs over his embarrassments, viewers responded to his indomitable, unshameable optimism.”

“Everything we know about the man says he’ll gravitate to wherever the media spotlight is and make it all about himself — it’s like a law of physics at this point, without the Uncertainty Principle.”

ARIZONA “AUDIT” — Associated Press: “In early March, a Boston-based vote-counting firm called Clear Ballot Group sent a bid to Arizona’s state Senate to audit the 2020 presidential election results in Maricopa County. The firm has conducted more than 200 such audits over 13 years in business.”

“He never heard back, he says.”

“Instead, the state Senate hired a small Florida-based cybersecurity firm known as Cyber Ninjas that had not placed a formal bid for the contract and had no experience with election audits.”

Arizona Republic: “Ducey has stayed away from the issue, even as the audit has raised concerns from the U.S. Department of Justice, the Republican county recorder, a bipartisan array of election officials from across the country and plenty of his own constituents.”

“Asked again to weigh in last week, Ducey’s spokesperson said ‘nothing has changed; from March, when Ducey said he wanted to wait until the results of the audit are released to say whether he supports it.’”

ALABAMA U.S. SENATOR — Alabama Political Reporter: “In what may be a preview of the contentious upcoming U.S. Senate race in Alabama, candidate Lynda Blanchard (R) called out Congressman and Senate hopeful Mo Brooks (R) for his hypocrisy, citing numerous examples of him accepting campaign contributions from groups she says are aligned with ‘woke’ ideals and progressive agendas.”

“The release also notes that in addition to accepting money from Mitt Romney, Brooks’ only federal campaign contribution before 2010, was to Romney.”

OHIO U.S. SENATOR — During Jane Timken’s tenure as Ohio’s GOP chair, Donald Trump won the one-time bellwether state by a whopping 8 percentage points. She put 150,000 miles on her car driving to the state’s 88 counties as a surrogate for the president. And she raised a total of $5 million for his two campaigns,” Politico reports.

“But that sterling record of MAGA support might not be enough to guarantee the former president’s support in her bid for the GOP Senate nomination. Timken’s sin? In her capacity as state party chair, she failed to immediately condemn home-state Republican congressman, Anthony Gonzalez, for voting to impeach Trump in response to the U.S. Capitol riot on Jan. 6.”

PENNSYLVANIA GOP — Philadelphia Inquirer: “When Pennsylvania Republicans celebrated the passage of two ballot questions this week reining in the emergency powers held by the governor’s office, they saw more than just a rebuke to Democratic Gov. Tom Wolf. They saw a path to winning the office themselves next year. … Republicans hoping to replace Wolf are making the lame-duck governor and his handling of the coronavirus a central issue in the very early days of the 2022 contest.”

“With President Joe Biden enjoying strong public approval ratings early in his tenure and Wolf’s slipping as his eight years in office near a close, Republicans are making the governor an even more prominent target — and largely ignoring Democrats’ big-spending ambitions in Washington.”

At least four Republican lawmakers who sought to undercut or overturn the 2020 presidential election are launching campaigns to become the top election official in key states that could decide control of Congress in 2022 — and who wins the White House in 2024, Politico reports.

This should be a 5-alarm warning for democracy.

“And then there are pre-Trump Republicans, like Gov. Asa Hutchinson, hoping against hope the moment will pass and they can return the party to its Reaganite roots. Finally, some Republicans are so appalled by Trumpism, they have left or are considering leaving the party. Perhaps most significant, each of these factions are bunched together in a state powered by a handful of corporations that are increasingly uneasy with the culture-war politics that define Trump Republicanism.”

Two prominent ex-Republicans, state Sen. Jim Hendren and former state House Speaker Davy Carter, both tell the New York Times that they’re considering running as independents, though they say they wouldn’t compete against one another. Hendren, who is also the nephew of termed-out GOP Gov. Asa Hutchinson, led the chamber’s Republican majority until last year, but he left the party in February in response to the Jan. 6 attack on the Capitol. Carter, meanwhile, ran the House from 2013 to 2015, which made him the first Republican speaker since Reconstruction.

The Times’ story indicates that they’d only run if Donald Trump’s endorsed candidate, former White House Press Secretary Sarah Huckabee Sanders, secures the GOP nomination next year, though there’s no quote from either Hendren or Carter explicitly saying so. Each man, though, made it extremely clear how much they hate the direction of their former party, with Carter declaring, “I’m convinced that even in Arkansas, Trump and Trumpism is a slow-sinking ship.”

TEXAS — Texas Tribune: “The number of Election Day polling places in largely Democratic parts of major Texas counties would fall dramatically under a Republican proposal to change how Texas polling sites are distributed… Voting options would be curtailed most in areas with higher shares of voters of color.”

“Texas Secretary of State Ruth Hughs (R) announced her resignation after Republicans in the Senate declined to confirm her appointment by Gov. Greg Abbott (R),” the Houston Chronicle reports.

“While Republicans have not publicly expressed any lack of faith in Hughs, Democrats point to her office’s assertion that Texas had a ‘smooth and secure’ election in 2020.”

PENNSYLVANIA U.S. SENATOR — Lt. Gov. John Fetterman recently released a Data for Progress poll finding him well ahead in a Democratic primary, and now he’s also dropped numbers showing him outperforming Rep. Conor Lamb in a general election. The survey has Fetterman beating two declared Republican candidates, real estate developer Jeff Bartos and 2020 House contender Sean Parnell, by margins of 48-38 and 48-40, respectively. Lamb, though, leads Bartos only 43-42, while Parnell edges him out 44-42. It’s possible the difference can be attributed to name recognition, but Fetterman’s poll didn’t include any questions that would shed light on name ID. Lamb, who defeated Parnell last year in the 17th Congressional District, has not yet announced a campaign for the Senate.

VERMONT U.S. SENATOR — While Democratic Sen. Pat Leahy recently reiterated that he doesn’t plan to decide whether to seek a ninth term until around December, Politico reports that he’s asking his colleagues to back his potential bid for re-election. If Leahy, who will be 82 on Election Day, were to remain in the upper chamber, he would pass the late Robert Byrd as the longest-serving senator in American history in June of 2026.

An unnamed source also passes on the rather surprising detail that Leahy has informed other senators that he’s “the only Democrat that can win the seat.” It’s true that Leahy is the one Democrat to ever be elected to represent Vermont in the Senate—Bernie Sanders was identified as an independent during each of his three campaigns—but the state’s politics have dramatically shifted to the left during his long tenure.

Leahy himself should know: While he narrowly won his first two campaigns in 1974 and 1980, he prevailed by double digits in 1986 and hasn’t been seriously threatened since. Indeed, the last time Republicans won a federal election in Vermont was 2000, when Leahy’s then-colleague, Jim Jeffords, secured re-election months before he abandoned the GOP to became a Democratic-aligned independent.