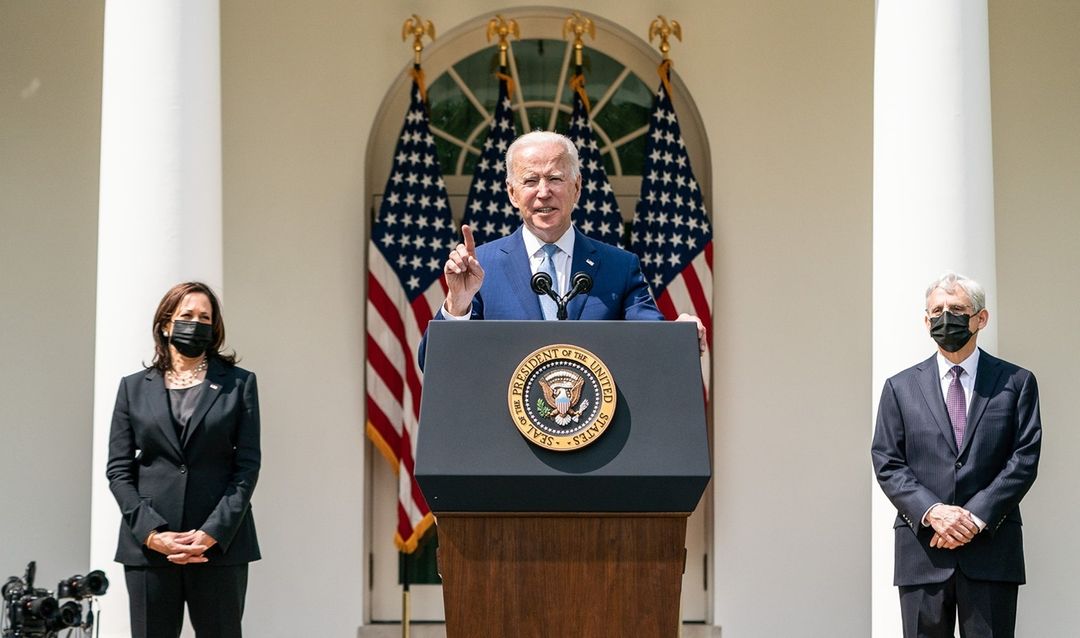 The Cook Political Report introduced the post-2020 edition of the Partisan Voter Index for all 50 states and 435 congressional districts.

“Though President Donald Trump lost Pennsylvania in 2020 and will have been out of office for nearly two years by the time voters cast their ballots in the Senate election, the Republican primary here is already revolving around him — creating a potential dilemma for the GOP in one of the nation’s most important races next year.”

NEW MEXICO 1ST CD — Republican Mark Moores is up with the first negative TV spot of the June 1 special election, and he accuses Democrat Melanie Stansbury of having “done little to lower taxes on seniors’ Social Security.” Moores then argues he’s “leading the effort to repeal the state tax on Social Security.”

Stansbury’s campaign responded with a statement declaring that, contrary to this messaging, she “has sponsored bipartisan legislation to provide a Social Security income tax exemption. . . She has been there for seniors throughout the pandemic, and even helped shop for her senior constituents when they couldn’t.” Her team also argued, “On the other hand, Mark Moores has not sponsored a single bill with the sole purpose of exempting Social Security income from income taxation.”

NEW YORK 12TH CD — Nonprofit founder Rana Abdelhamid announced Wednesday that she would challenge longtime Rep. Carolyn Maloney in the Democratic primary, and she said later in the day that she’d quickly raised $100,000 for her effort. Abdelhamid is the first notable candidate to announce a bid for this safely blue New York City seat, which in its current form includes the East Side of Manhattan and nearby parts of Queens and Brooklyn, though she’s unlikely to be the last: 2020 candidate Suraj Patel, who held Maloney to a 43-39 win last time, recently said, “I fully expect to be a candidate in this race.”

The 27-year-old Abdelhamid, who would be the first Muslim to represent New York in Congress, said of the incumbent, “Congresswoman Maloney has been in office for 28 years, for longer than I’ve been alive.” Abdelhamid also argued, “Under her leadership, rent has only skyrocketed, our public schools have only gotten more segregated and more underfunded.” Abdelhamid herself acknowledged that she hasn’t lived in the 12th District since high school, saying that her family was forced to move because of the increasing cost of living.

NEW MEXICO GOVERNOR — New Mexico reporter Joe Monahan, who’s long published a tipsheet on state politics, says that former Republican Lt. Gov. John Sanchez “appears to be considering” a run for governor, noting that next week he’ll be a guest speaker at a dinner hosted by the Doña Ana County Republican Party. (Doña Ana, home to Las Cruces, is the second-largest county in the state.) Sanchez ran for governor once before but got crushed 55-39 by Democrat Bill Richardson in 2002.

Given the paucity of GOP options for statewide office in New Mexico, though, Sanchez’s name comes up often. After getting elected lieutenant governor as fellow Republican Susana Martinez’s running-mate during the 2010 red wave, Sanchez tried his hand at a Senate campaign the following cycle but dropped out before the primary. In 2018, he considered bids for governor and senator but passed on both, and he said and did the same thing about last year’s Senate race, too.

FLORIDA 1ST CD — The Guardian reports that Air Force veteran Bryan Jones is “planning on running” in the Republican primary against scandal-plagued Rep. Matt Gaetz, though his consultants say he hasn’t decided when to announce.

VIRGINIA GOVERNOR — Former state Rep. Jennifer Carroll Foy is running her first TV ad ahead of the June 8 Democratic primary, an introductory spot that focuses on healthcare. Carroll Foy says that after her grandmother, who raised her, suffered a stroke, the family was “forced to choose between her mortgage and medicine.”

She contrasts that with her own premature delivery of twins (which, incidentally, happened while she was running her first campaign for state delegate in 2017), saying, “I was grateful to have healthcare—to save their lives and mine.” Carroll Foy concludes by highlighting her efforts to expand Medicaid while in the legislature and says she’s fighting “to bring affordable healthcare to all of us.”

The Republican firm Medium Buying says that so far, Carroll Foy has spent $185,000 on television and radio advertising, though it’s not clear how much is behind this initial spot. The Democratic frontrunner, former Gov. Terry McAuliffe, has spent $544,000 on the airwaves to date, per Medium.

FLORIDA 20TH CD –– Democratic state Sen. Shevrin Jones, who’d been considering running in the special election to replace the late Alcee Hastings, says he will not join the race.

KANSAS 3RD CD — Republican state Rep. Chris Croft, who just so happens to chair the House’s redistricting committee, says he’s considering a campaign for Kansas’ 3rd Congressional District, which a top member of his own party explicitly listed as the GOP’s top gerrymandering target last year. House Speaker Ron Ryckman claims that he was unaware of Croft’s interest in a congressional bid against Democratic Rep. Sharice Davids when Croft was appointed to lead the committee and says he may be removed if he does in fact run.

Of course, setting things up that way would would allow Croft to draw new maps and only later declare himself a candidate—a very obvious conflict that Democrats have pounced on. Croft argues that the same issue affects every sitting lawmaker, since they’ll all be participating in the mapmaking process for their own districts, but that’s an argument for independent redistricting, not piling on further conflicts of interest.

TEXAS 8TH CD — A few Republicans are already showing interest in running to succeed Rep. Kevin Brady, who announced his retirement on Wednesday. Former Brady campaign manager Christian Collins tells the Texas Tribune’s Patrick Svitek that he’s “seriously considering” a bid, while state Sen. Brandon Creighton and state Rep. Steve Toth didn’t directly answer whether they’re looking at the race but did not rule out the possibility either. Toth tried to primary Brady in 2016 but lost 53-37.

“The conversation offers insight into how incumbent Democrats in deep-blue areas think about the activist left and use the resources of the Democratic Congressional Campaign Committee, House Democrats’ official campaign arm, to fight off competition within the party.”

“Former President Donald Trump has vowed to drive the 10 House Republicans who voted to impeach him out of office, but GOP donors, political action committees and even some Democrats poured money into those candidates’ coffers in the wake of the Jan. 6 Capitol riot,” Bloomberg reports.

“Collectively, the 10 members raised $6.4 million, with seven setting personal records for first-quarter fundraising in a non-election year. All outraised the challengers who filed campaign finance reports.”

Politico: “Most House Republicans who objected to the certification of President Joe Biden’s victory saw their small-dollar fundraising rise in the first three months of this year compared to the same quarter in 2019, in the latest indication that Republicans aren’t facing a major cash crunch three months after many corporate PACs vowed to stop giving to their campaigns.”

Axios: “Republicans and conservative groups made inroads via YouTube in 2020 with low-information Latino voters often ignored by Democrats, a deep new analysis of U.S. voters shows.”

“The research found that 64% of registered Latino voters — and 74% of Hispanic voters in Florida — got election information from YouTube.”