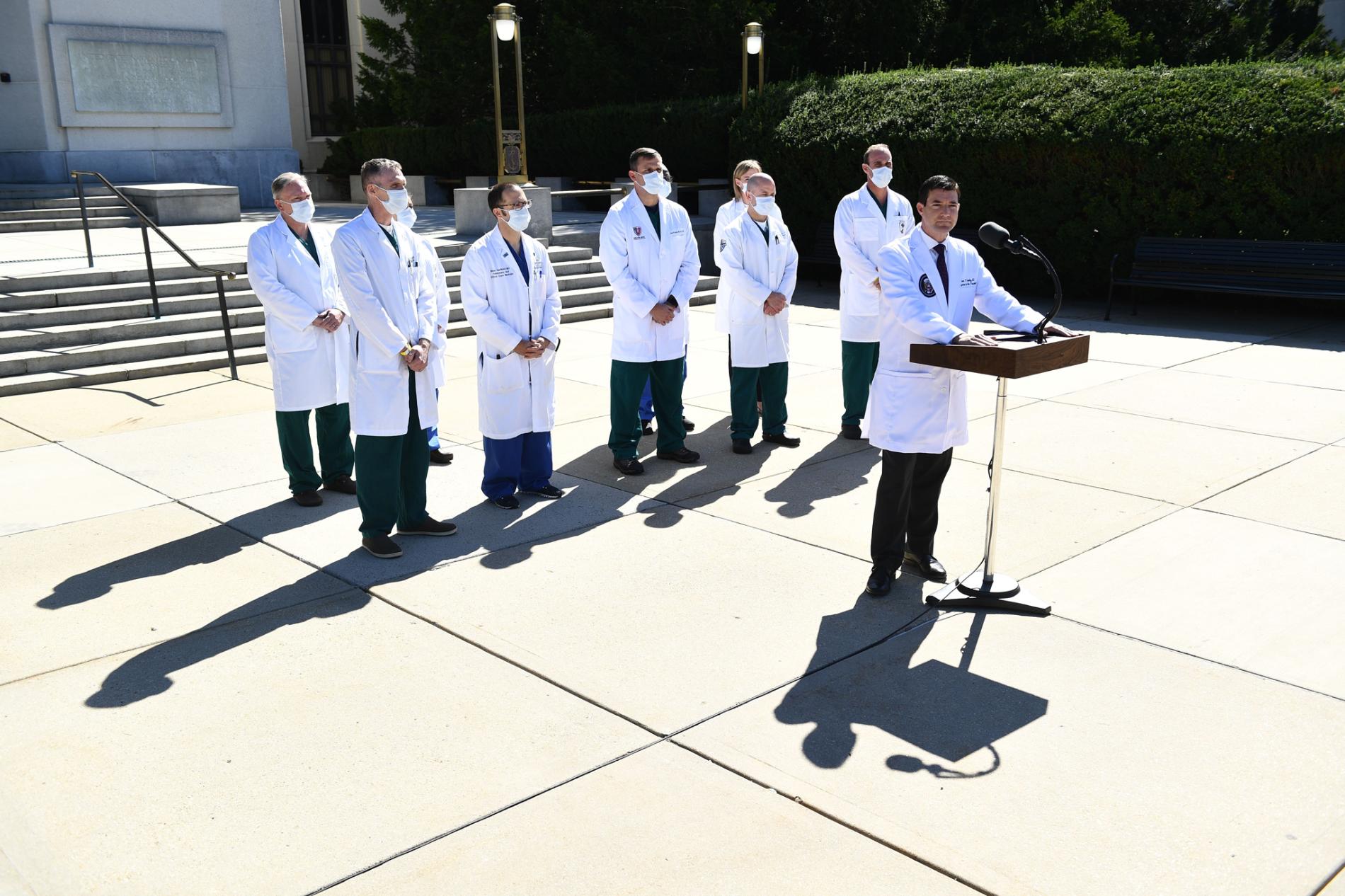 Dr. Sean Conley said that President Trump had been given the steroid dexamethasone on Sunday, the New York Times reports. “The drug has been shown to help patients who are severely ill with Covid-19, but it is typically not used in mild or moderate cases of the disease, and in fact could be harmful early in the course of the disease, when steroids could dampen the body’s own immune response.”

“Nonetheless, the doctors said, Mr. Trump is doing better and they projected he could be discharged back to the White House from the hospital as early as Monday.”

Stat: Trump getting a steroid usually for patients with severe COVID-19.

Dr. Conley was asked at a press briefing this morning why he was so misleading on Saturday and replied he was trying to reflect the team’s “upbeat attitude” and didn’t want to “steer the course of illness in another direction,” the Wall Street Journal reports. He added: “In doing so, it came off that we were trying to hide something, which wasn’t necessarily true.”

Dr. Sanjay Gupta on CNN said doctors at Walter Reed are throwing “the kitchen sink” at Trump, feeding him three different “serious” medications, one of which is experimental in nature. He suggests this is far more serious than what Conley is letting on.

“Meadows is now widely known inside the White House to be the unnamed source who spoke to reporters following the medical briefing yesterday and offered a more dire assessment than Navy Cmdr. Dr. Sean Conley had given shortly before.”

“President Trump didn’t disclose a positive result from a rapid test for Covid-19 on Thursday while awaiting the findings from a more thorough coronavirus screening,” the Wall Street Journal reports.

“Mr. Trump received a positive result on Thursday evening before making an appearance on Fox News in which he didn’t reveal those results. Instead, he confirmed earlier reports that one of his top aides had tested positive for coronavirus and mentioned the second test he had taken that night for which he was awaiting results.”

As the virus spread among the people closest to him, Mr. Trump also asked one adviser not to disclose results of their own positive test: “Don’t tell anyone.”

New York Times: “He looked wan and sounded less energetic than usual in a rambling message that included campaign talk and boasts about his record.”

His explanation for why he had gone to the hospital was muddled and unclear: “I had no choice. I just didn’t want to stay in the White House. I can’t be locked up in a room upstairs and totally safe and just say, hey, whatever happens happens. I can’t do that. We have to confront problems.”

“Their decisions to report possible illegal activity involving their employer represents a stunning development in an agency that prizes loyalty, particularly from within Paxton’s inner circle. It places a renewed spotlight on Paxton, who is already under indictment for alleged securities fraud.”

Paxton is also the co-chair of Lawyers for Trump.

Sen. Ron Johnson (R-WI) “attended an Oktoberfest fundraising dinner on Friday evening while he was awaiting the test results that would show he was infected with COVID-19,” the Madison Capital Times reports.

“The Wisconsin Republican chose to attend the bash even though he knew that President Trump and many of his inner circle had tested positive for the coronavirus.”

Jason Miller, a senior adviser to President Trump’s re-election campaign, argued to ABC News that Joe Biden has often “used the mask as a prop” and defended the campaign’s handling of the coronavirus even as Trump remained in the hospital.

Said Miller: “You know, I would say that with regard to Joe Biden, I think too often he’s used the mask as a prop. A mask is very important, but even if he’s — he could be 20, 30 feet away from the nearest person and still have the mask on.”

He added: “That’s not going to change anything that’s out there. But also we’ve seen with — with Joe Biden, I mean, we can’t all just stay in our basement for the rest of our lives.”

The White House has released photos which purport to show President Trump “at work” at Walter Reed National Military Medical Center. However, a close up of one photo shows Trump signing his name to a blank sheet of paper.

“One month from Election Day, President Trump is facing a credibility crisis as yawning as his health crisis, at a moment when he needs the public’s trust the most,” the AP reports.

“The president’s coronavirus infection, as well as the illnesses of several aides and allies, has imperiled the highest levels of the U.S. government. The White House’s efforts Saturday to project calm backfired in stunning fashion, resulting in a blizzard of confusing and contradictory information about the health and well-being of the commander in chief.”

“It’s a moment months in the making, the collision of Trump’s repeated defiance of his own administration’s guidelines for staying safe during the pandemic and his well-known disregard for facts. The result: deep uncertainty for Americans over who and what to believe about the health of the nation’s leader at a perilous moment in U.S. history.”

“President Trump remains on the job despite his hospitalization for covid-19 and there are no plans for Vice President Pence to assume even temporary authority as president, the first full day of Trump’s inpatient treatment at Walter Reed National Military Medical Center,” the Washington Post reports.

“Under the 25th Amendment to the Constitution, Pence would assume the full authority of the presidency if Trump were to die or become unable to perform his duties. But although the amendment, ratified in 1967, was intended to clear up ambiguities in the original 18th-century document, it is not clear what exactly constitutes being incapacitated, and language about who makes that call has never been tested.”

Two sources tell Gabriel Sherman that doctors gave President Trump an ultimatum on Friday: “he could go to the hospital while he could still walk, or doctors would be forced to take him in a wheelchair or on a stretcher at a later point if his health deteriorated… Trump waited to leave for the hospital until the stock market closed on Friday.”

“After spending months denying the dangers of COVID-19, Trump is expressing an emotion aides have rarely seen: fear. On Friday, Trump grew visibly anxious as his fever spiked to 103 Fahrenheit and he was administered oxygen at the White House… Two sources told me Trump experienced heart palpitations on Friday night—possible side effects of the experimental antibody treatment he received. Trump has wondered aloud if he could defeat the disease.”

“Chief of Staff Mark Meadows has told Republicans that the next few days will be critical to determine the virus’s outcome.”

One of Trump’s personal assistants has tested positive for coronavirus, Bloomberg reports. Nick Luna, as bodyman, works in very close proximity to the president so it’s not surprising. However, Luna is married Cassidy Dumbauld, who is an aide to Jared Kushner.