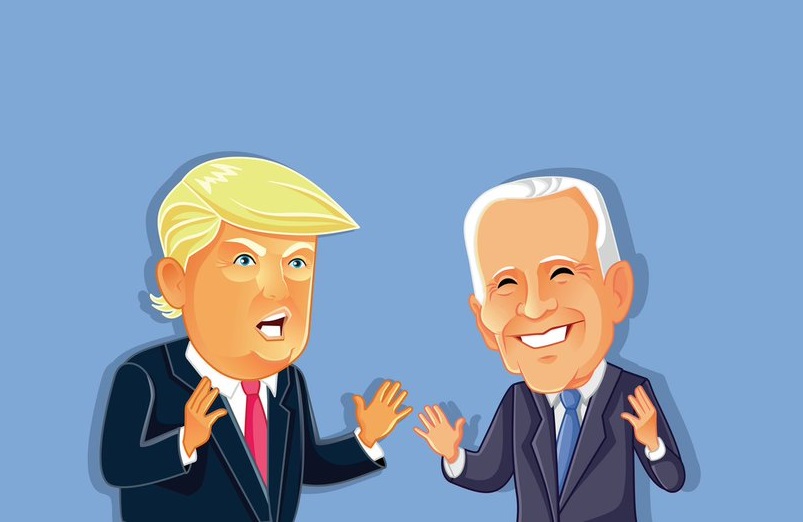 A new CNN poll finds 63% of Americans say President Trump handled the risk of coronavirus infection to others around him irresponsibly. “Disapproval of the President’s handling of the coronavirus outbreak stands at a new high in the survey, with 60% saying they disapprove. Additionally, 63% say his own infection is unlikely to change anything about the way that he handles the pandemic.”

A new ABC News/Ipsos poll finds nearly 3 out of every 4 Americans doubt that President Trump took seriously the threat posed to his well-being nor the steps necessary to avoid contracting the virus.

Among registered voters who watched the first presidential debate, 46% said Biden won; only 28% said the same of Trump. The president’s hectoring performance — 59% of debate watchers rated it as “poor,” compared to only 32% for Biden — was followed by a collapse in his support among likely independent voters.

While Joe Biden’s 14-point lead over Donald Trump in the presidential race is the headline from the new Wall Street Journal/NBC News poll, the most interesting finding is that Biden has seen an increase favorability ratings:

That suggests the Trump campaign has been unable to damage Biden despite spending tens of millions of dollars on negative advertising. Biden has actually gotten more popular as the campaign goes on. This trend is also noticeable in the RealClearPolitics polling averages, seen above.

Nate Silver: “The debate provides a clear enough line in the sand… that it’s worth doing a before-and-after comparison of the polls. One way to discern this is via our national polling average, where Biden’s lead has inched up to 8.1 points from 7.1 points before the debate.”

“In some cases, the pre-debate poll was conducted months before the debate. But even if we only focus on the polls that released results at some point in September, the top line is similar: Biden’s gain is 1.4 percentage points, on average. And for what it’s worth, a swing of 1 or 2 points toward Biden is consistent with the effects that first debates have had for challengers in the past.”

“The Commission on Presidential Debates has approved plans for plexiglass to be used in Wednesday’s vice presidential debate amid mounting concerns about coronavirus transmission,” Politico reports.

“Plexiglass is expected to be used as a barrier between Vice President Mike Pence and Sen. Kamala Harris, as well as between the two candidates and moderator Susan Page.”

“No Wisconsin absentee ballots were found in mail discovered in a ditch in the Fox Valley last week,” the Milwaukee Journal Sentinel reports.

“Three trays of mail were found in a ditch in Greenville last week, and the Outagamie County Sheriff’s Office said at the time it included several absentee ballots.”

Washington Post: “In a tumultuous year marked by a pandemic that has killed nearly 210,000 Americans and civil unrest, Republicans saw the fight over a Supreme Court vacancy as a chance to boost their political fortunes. Court fights typically rally the GOP base, and Senate Majority Leader Mitch McConnell (R-KY) encouraged Trump to move quickly to select a conservative nominee to galvanize voters.”

“But the GOP’s predicted Supreme Court bump has yet to materialize. And the party is now facing down a new level of uncertainty as the coronavirus spreads in GOP circles in Washington, with Sens. Thom Tillis (NC), Mike Lee (UT) and Ron Johnson (WI) testing positive.”

The news that Cunningham was sending sexually explicit texts to a woman who was not his wife is having somewhat of an impact on Cunningham’s favorability rating, with 37% saying they have a positive opinion of him to 39% with a negative one. But that -2 net favorability rating is still 21 points better than Tillis’ — he’s at -23 with 31% of voters having a favorable opinion of him to 54% with an unfavorable one.

“For President Trump’s reelection campaign, October was supposed to be the turnaround month. After trailing Democratic nominee Joe Biden all year, Trump thought this past week would be his slingshot to securing a second term by disqualifying his opponent at their first debate together, expanding his coalition of voters, raising more money and staging bigger rallies,” the Washington Post reports.

“It has not worked out the way he envisioned.”

“The past seven days have dealt the incumbent one setback after another — the extraordinary revelation in the New York Times that he had paid little to no federal income taxes in recent years; a belligerent debate performance that risked turning off many voters; the arrest of his recently demoted campaign manager in Florida; and finally the president’s own hospitalization for the coronavirus because of an outbreak in a White House that has made a mockery of public health guidelines and offered contradictory accounts of Trump’s health.”

Sen. John Cornyn told the Houston Chronicle that President Trump “let his guard down” on the coronavirus and that his rhetoric has created “confusion” as the country has struggled to get the pandemic under control.

Said Cornyn: “I think he let his guard down, and I think in his desire to try to demonstrate that we are somehow coming out of this and that the danger is not still with us — I think he got out over his skis and frankly, I think it’s a lesson to all of us that we need to exercise self discipline.”

New Yorker: “The Project, which was founded by eight people, now employs about thirty-five paid staffers. For the first months, everybody worked remotely—in Tallahassee, Denver, East Hampton, Sacramento. Once the war room was ready, more than a dozen employees began arriving at their assigned housing with luggage and pets, prepared to stay until November. The selection of a secret temporary headquarters had been complicated by the pandemic, but security was also a factor.”

“The Project was on track to take in some seventy million dollars by Election Day—not as much as many established pacs, but far more than the founders anticipated.”

Rick Hasen: “When Judge Amy Coney Barrett sits for questions before the Senate Judiciary Committee in mid-October, no doubt Democrats will pepper her with questions about whether she would recuse herself in any Trump v. Biden election lawsuit to come before the Supreme Court. Although that’s an important question to ask, perhaps the bigger question is what it would mean in the long run for voting and election cases to have a sixth conservative justice on the Supreme Court.”

“In short, a Barrett confirmation would make it more likely we will see a significant undermining of the already weakened Voting Rights Act — the Court said on Friday it will hear a case involving the law. A 6-3 conservative Court might allow unlimited undisclosed money in political campaigns; give more latitude to states to suppress votes, especially those of minorities; protect partisan gerrymandering from reform efforts; and strengthen the representation of rural white areas, which would favor Republicans.”

President Trump’s national security adviser, Robert O’Brien, said that he had warned his Russian counterpart last week that “there would be absolutely no tolerance for any interference” in the November election, but did not mention that American intelligence officials and a range of private firms had said they already saw evidence of Russian influence operations, the New York Times  reports.

More than $151 million has been spent so far on TV and radio ads in the twin U.S. Senate races in Georgia, the Atlanta Journal Constitution reports.

“Democrats are trouncing Republicans on the airwaves in the battle for the Senate, outspending them in nine of the top 10 competitive Senate races,” Axios reports.

“Traditionally, incumbent senators have a fundraising edge, but it’s different this cycle thanks to unlimited contributions from Democratic super PACs as well as highly-motivated small donors.”

Joe Biden told reporters that he is “reluctant” to comment on questions relating to President Trump’s health and that as long as health experts feel it’s okay to do so, he wants to move ahead with the town hall presidential debate slated for October 15. Said Biden: “I’ll do whatever the experts say. I think we should be very cautious.”

“An increasing number of Democrats are vocally urging Joe Biden’s campaign to resume running negative ads against Donald Trump, arguing that their party’s nominee should not relent even as the president remains hospitalized after contracting the coronavirus,” McClatchy reports.

“With Election Day less than a month away and early voting already in progress in key battleground states, some Democratic operatives said Biden must push forward with the messaging that has helped provide him with a stable lead in the presidential race, especially as the Trump campaign has continued to air attack ads.”

“Toomey was widely seen as the likely Republican favorite for governor in 2022. His decision not to run for that office or for Senate could create two wide open contests on the Republican side.”