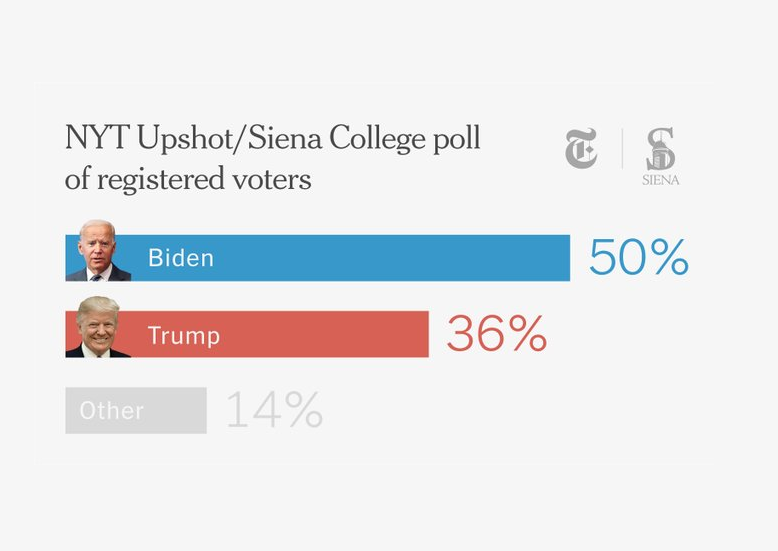 “That is among the most dismal showings of Mr. Trump’s presidency, and a sign that he is the clear underdog right now in his fight for a second term.”

“Mr. Biden leads Mr. Trump by enormous margins with black and Hispanic voters, and women and young people appear on track to choose Mr. Biden by an even wider margin than they favored Hillary Clinton over Mr. Trump in 2016. But the former vice president has also drawn even with Mr. Trump among male voters, whites and people in middle age and older — groups that have typically been the backbones of Republican electoral success, including Mr. Trump’s in 2016.”

Remember, in the Pandemic Era, it takes longer to count the votes. So keep refreshing this NY Times Results page all day. Here is where things stand:

In Kentucky’s Democratic Primary for the U.S. Senate, Amy McGrath leads Charles Booker by 5,000 votes with 46% of the vote left to report, and there is some hope for Booker in that his strongholds of Louisville and Lexington have yet to report.

In NY’s 16th Congressional District’s Democratic Primary, it sure looks like the ancient and out of touch Eliot Engel has been defeated by progressive Jamaal Bowman.

In the 12th District, three decade and pro-police Carolyn Maloney barely leads by 500 votes over progressive Suraj Patel with 100% of the precincts reporting. The question now is how many provisional or absentee ballots remain.

ABC News: “Joe Biden and Barack Obama reunited for the first time in the 2020 election cycle for a grassroots fundraiser Tuesday evening that raised more than $11 million according to the campaign — the best fundraising event for the former vice president so far.

More than 175,000 grassroots donors raised $7.6 million for the event — a total alone that topped the $6 million brought in by a fundraiser with Sen. Elizabeth Warren last week, previously their best event of the 2020 cycle.”

“I am here to say the help is on the way if we do the work because there’s nobody I trust more to be able to heal this country and get back on track than my dear friend Joe Biden.”  — Barack Obama, quoted by Axios, at a virtual fundraiser for Joe Biden.

Cawthorn, a 24-year-old businessman, defeated Lynda Bennett, who was backed by Meadows and President Trump.

“You can’t fake it. You’re either strong or you’re not. And Jeff Sessions? He’s not. He wasn’t man enough to stand with President Trump when things got tough, and now he’s telling lies about me to cover it all up. It’s time for these weak politicians to go.”

It is not immediately clear where Bass stands in the vetting process but her name has been floated for consideration by powerful Democrats like House Majority Whip James Clyburn (D-SC).

Stacey Abrams told Axios that she hopes Joe Biden picks a running mate who “reflects his understanding of this moment and his effort to continuing to expand the electorate,” but she declined to say whether she’s being vetted for that role for which she’s openly campaigned.

“Signum’s flip suggests that firms on Wall Street and in the financial industry could start preparing for the end of Republican control, both in the White House and Senate.”

“At the White House, Trump has repeatedly been shown polls in which Biden holds a considerable lead among women and seniors in swing states,” the Washington Post reports.

“GOP Senate strategists have watched a similar erosion in down-ballot races… Republican strategists close to the president say he has to convince women that his handling of the coronavirus has been better than they currently believe — and that he has saved lives and the economy.”

“Kushner has talked to allies about promoting an agenda that is more amenable to many suburban voters, and some Trump advisers are considering a push on topics such as school choice. Advisers are discussing sending to swing states Trump surrogates who are less polarizing than the president himself, such as his eldest daughter.”

“Soon after Donald Trump took office, people with ties to the Chinese state poured hundreds of thousands of dollars into his re-election bid to get close to and potentially influence the new president,” the Wall Street Journal  reports.

“The effort had early success in gaining access for those involved, helping them meet the president or top Republicans at fundraisers or at an internal GOP leadership meeting. It reveals how China seeks to build inroads into U.S. politics, gather information on U.S. leaders and if possible affect policy-making.”

“The judge agreed, turning a suspended jail sentence for the future Kansas Congressman and Republican U.S. Senate candidate into a slap on the wrist.”

“But Fleske was more than a prosecutor. He was also the son of Marshall’s business partner and neighbor.”

Josh Kraushaar: “Right now, it looks more likely that Biden will win a landslide victory, picking up states uncontested by Democrats in recent elections, than it is that Trump can mount a miraculous turnaround in just over four months. Even as Trump tries to advance a law-and-order pitch amid growing violence and tumult in the nation’s cities, it’s unlikely to benefit the president because he’s the leader in charge. The chaos candidate is now the chaos president. Biden is the challenger pledging a return to normalcy.”

“Just look at the swing-state map: Biden is leading in every battleground state, according to the RealClearPolitics polling averages, with the exception of North Carolina where the race is tied. Trump trails by 6 points in the electoral prize of Florida, where the president’s newfound willingness to meet with Venezuelan dictator Nicolas Maduro prompted a fierce backlash and quick White House retreat. He’s down 4 points in Arizona, a state that has only voted for a Democratic presidential candidate once since 1964. He’s not close to hitting even 45 percent of the vote in Michigan, Pennsylvania, or Wisconsin—the Midwestern states he flipped to win the presidency.”

“Meanwhile, the Trump campaign is airing ads in Iowa and Ohio, two states he won by near double-digit margins in 2016, as recent polls show Trump in precarious shape in both states.”

Politico: “A poll by the University of North Florida found that 58% of Jacksonville voters surveyed oppose the RNC convention, and 42% support it. Seventy-one percent said they were concerned the coronavirus would spread due to the convention, and 65% said they worried about ‘social unrest,’ the poll showed.”