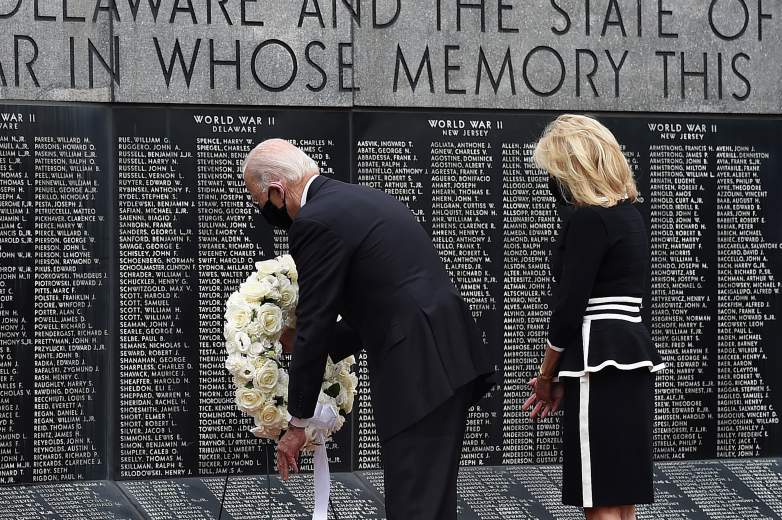 “As the death toll in the novel coronavirus pandemic neared 100,000 Americans this Memorial Day weekend, President Trump derided and insulted perceived enemies and promoted a baseless conspiracy theory, in between rounds of golf,” the Washington Post reports. “He made little mention of the sacrifice Americans honor on Memorial Day or the grim toll of the virus.”

“Although Trump on Friday had called for worshipers to return to church in person this holiday weekend, Trump himself did not. He played golf on Sunday morning.”

New York Times: “He finally ordered flags lowered to half-staff at the White House only after being badgered to do so by his critics.”

“Joe Biden appeared in public Monday for the first time in more than two months, laying a wreath to honor the fallen at a Delaware war memorial,”  NBC News reports.

“What in most campaign years would be a fairly ordinary holiday ritual was anything but for the former vice president, who has only been seen by most Americans in small doses from a now-familiar makeshift TV studio in his Wilmington home since becoming the apparent Democratic nominee.”

Said Biden: “It feels good to be out of my house.”

Trump also misspelled Rep. Conor Lamb’s (D-PA) name, calling him “Connor Lamm” instead as the president touted the candidacy of Sean Parnell, who is hoping to oust Lamb from the U.S. House seat in Pennsylvania’s 17th Congressional District.

President Trump’s net approval for handling the coronavirus pandemic is now at a new low of -11 points, 43% to 54%.

Ann Coulter, an early endorser of President Trump, went on a Sunday Twitter tear, calling him “the most disloyal actual retard that has ever set foot in the Oval Office,” The Wrap reports. She added that she regrets once believing in “this shallow and broken man.”

Wall Street Journal: “The hit to U.S. state and local finances from the coronavirus pandemic could be a drag on the nation’s economic recovery for years to come, if the past is any guide.”

“State and local government spending and employment levels didn’t fully recover from the 2007-09 recession until last fall, a decade after the downturn ended and only a few months before the coronavirus led to a new round of cuts…”

“The condition of state and local government finances affects the health of the broader economy because their spending amounts to almost 11% of gross domestic product, and they employ about one of every eight American workers, including teachers, police officers and firefighters.”

New York Times: “The historical comparisons are breathtaking. More Americans have died of the coronavirus in the last 12 weeks than died in the Vietnam and Korean Wars combined and nearly twice as many as died of battle wounds during World War I. The death toll has nearly matched the number of people killed by the initial blasts of the world’s first atomic bombs dropped on Hiroshima and Nagasaki. In terms of American deaths, it is the equivalent of 22 Iraq wars, 33 September 11 attacks, 41 Afghanistan wars, 42 Pearl Harbors or 25,000 Benghazis.”

“Put another way, in Trump country, the virus’s greater pain has been economic, which helps explain why support for a swift reopening is so much more intense there.”

“Many of these communities are isolated and hard to reach. They were largely spared from the disease shutting down their states — until, suddenly, they weren’t. Rural counties now have some of the highest rates of covid-19 cases and deaths in the country, topping even the hardest-hit New York City boroughs and signaling a new phase of the pandemic — one of halting, scattered outbreaks that could devastate still more of America’s most vulnerable towns as states lift stay-at-home orders.”

“The Pentagon is actively planning on living with the coronavirus well into 2021, putting it at risk of angering President Trump as he expresses confidence that the disease is on the wane,” The Hill reports.

“Defense officials have extended a freeze on troop movement, held ships in port and laid the framework for what the military will look like in an extended pause because of the COVID-19 pandemic.”

“The extended preparation cuts against White House messaging that the virus will recede in the coming months and that a vaccine could be available by the end of the year.”

“New Jersey Gov. Phil Murphy (D) warned that key employees — including health care workers, firefighters, police officers and teachers — could be laid off if the state does not receive additional funding from the federal government,” CNN reports.

“The dire prediction from Murphy reflects what many governors across the country fear as states grapple with budget shortfalls from the economic calamity brought on by the coronavirus pandemic.”

Tom Nichols: “Since his first day as a presidential candidate, I have been baffled by one mystery in particular: Why do working-class white men—the most reliable component of Donald Trump’s base—support someone who is, by their own standards, the least masculine man ever to hold the modern presidency?”

“The question is not whether Trump fails to meet some archaic or idealized version of masculinity. The president’s inability to measure up to Marcus Aurelius or Omar Bradley is not the issue. Rather, the question is why so many of Trump’s working-class white male voters refuse to hold Trump to their own standards of masculinity—why they support a man who behaves more like a little boy.”

President Trump warned that Republicans could seek to move their 2020 convention if North Carolina Gov. Roy Cooper (D) cannot guarantee that coronavirus restrictions will be lifted.

Said Trump: “Plans are being made by many thousands of enthusiastic Republicans, and others, to head to beautiful North Carolina in August. They must be immediately given an answer by the Governor as to whether or not the space will be allowed to be fully occupied.”

He added: “If not, we will be reluctantly forced to find, with all of the jobs and economic development it brings, another Republican National Convention site. This is not something I want to do. Thank you, and I LOVE the people of North Carolina!”