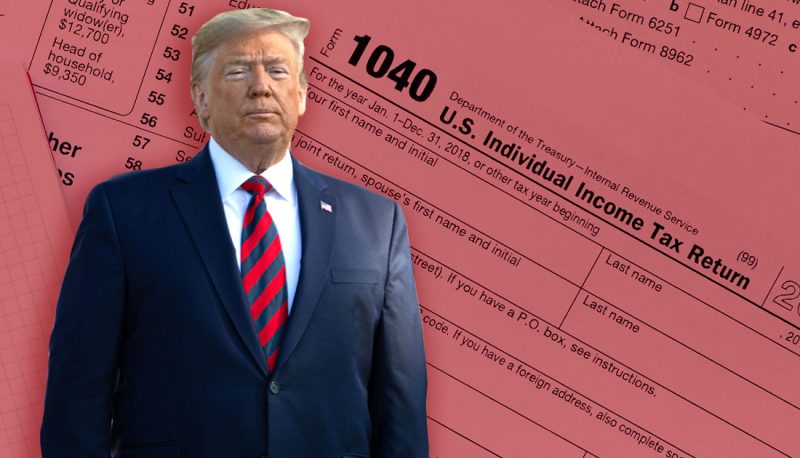 TRUMP LOSES IN COURT AGAIN ON HIS TAXES. “A federal appeals panel on Monday said President Trump’s accounting firm must turn over eight years of his personal and corporate tax returns to Manhattan prosecutors, a setback for the president’s attempt to keep his financial records private,” the New York Times reports.

“But the tax returns are not likely to be handed over soon. Mr. Trump has fought vigorously to shield his tax returns, and the case appears headed to the United States Supreme Court.”

“The ambassador, Marie Yovanovitch, told Democrats and Republicans during her deposition last month that she believed she was the victim of a conservative smear campaign that sought, incorrectly, to portray her as disloyal to President Trump and prompted him to remove her.”

TRUMP DISTANCES HIMSELF FROM SWAMPY TRUMP LOBBYIST. President Trump distanced himself from “a man named Michael Esposito” in a series of tweets Monday morning.

The Washington Post notes Esposito’s soaring rise as a lobbyist is due to his claims to be “close to centers of power in the Trump administration.”

Contract bids says Esposito has “an open line of communication to the President of the United States” and is in “regular” contact with the president. The same proposals say Esposito worked with the president’s son Eric Trump and son-in-law and senior adviser Jared Kushner on real estate deals. And the firm’s website calls Esposito “an integral part of the senior-most leadership” of the Republican National Committee.

IRONY: HOUSE GOP USING THE EVIL CROWDSTRIKE. “House Republicans’ campaign arm is still relying on CrowdStrike to protect its sensitive data, even as the cybersecurity firm has become embroiled in a bizarre conspiracy theory promoted by President Trump and his GOP allies,” the Washington Post reports.

“The California company, which Trump and some House Republicans have accused without evidence of conspiring with Democrats in the 2016 election, is still helping the National Republican Congressional Committee protect its networks.”

UNEMPLOYMENT RISING IN SWING STATES. Washington Post: “In more than 1,000 counties, or about one in three, the unemployment rate is higher than it was a year ago. That includes all 72 counties in Wisconsin and all 10 in New Hampshire, as well as most in Michigan, Minnesota and North Carolina. The numbers can be volatile from month to month, but this trend remains even if you look at entire quarters or years.”

FOUR NO SHOWS ON MONDAY. Four Trump administration officials who were scheduled to testify in front of the impeachment inquiry Monday will not appear for their depositions, the Wall Street Journal reports.

The officials are Robert Blair, a senior adviser to chief of staff Mick Mulvaney; John Eisenberg, deputy counsel to the president for national security affairs; Michael Ellis, Eisenberg’s deputy; and Brian McCormack, a director at the White House budget office. They have all been told by the White House that they cannot testify.

House Intelligence Committee Chair Adam Schiff (D-CA) declared on Monday that four White House staffers’ refusal to appear for their scheduled hearings that day will only serve as more evidence of President Donald Trump’s attempt to obstruct justice. “This will be further evidence of an effort by the administration to obstruct the lawful and constitutional duties of Congress,” Schiff told reporters.

“Meanwhile, he’s ravenously consuming news about the subject — primarily through a friendly lens. From the Oval Office to the White House residence to Air Force One, he’s closely tracking how Republican members of Congress are digesting the latest revelations on his handling of Ukraine, and monitoring their statements for any sign of hesitation or perceived disloyalty.”

“Jury selection begins Tuesday in the trial of longtime Donald Trump confidant Roger Stone, accused of lying to Congress and pressuring another person to do the same thing,” NBC News reports.

“A Trump friend for more than 30 years who served as an adviser to his 2016 campaign, Stone has called himself the victim of a political prosecution. During the months leading up to the trial, he was repeatedly admonished by the judge to stop making public comments about the case that could influence the potential jury pool.”VISIT WEBSITE

THE EVOLVING GOP POSITION ON IMPEACHMENT. Sources close to Republican leadership tell Axios they expect many GOP senators to ultimately settle on a talking point that Trump’s actions were “inappropriate but not impeachable.”

Said a source close to Senate Majority Leader Mitch McConnell: “If we know what we know right now, there is no problem.”

Key point: “An important part of the Senate GOP strategy is to present impeachment as an entirely partisan exercise.”

But last night Trump appeared to squash that plan in a tweet: “False stories are being reported that a few Republican Senators are saying that President Trump may have done a quid pro quo, but it doesn’t matter, there is nothing wrong with that, it is not an impeachable event. Perhaps so, but read the transcript, there is no quid pro quo!”

As more and more witnesses confirm the quid pro quo, Trump isn’t making life any easier for his defenders.

TRUMP THE TRANSCRIPT TRUTHER. President Trump suggested on Twitter that Republicans should release their own versions of transcripts of interviews in the House impeachment inquiry. Um, there is only one transcript, taken down by a court reporter/stenographer who works for a private company. There are no Democratic Stenographers or Republican Stenographers. I know this for a fact, since in real life I am a lawyer and work with court reporters almost every day.

Trump asserted that House Intelligence Committee Chairman Adam Schiff “will change the words that were said to suit the Dems purposes.” Nearly every stenographer has an audio or video tape of every hearing to assist them in completing the transcript. So there can be ‘changing of words.’

TRUMP IS AN IDIOT WHEN IT COMES TO WILDFIRES. Los Angeles Times: “Autumn in California now comes not only with fierce, wind-driven wildfires but with routine claims from President Trump that the state’s leaders are to blame for the disasters, followed by assurances from experts that the president doesn’t know what he’s talking about.”

Several of the recent fires, including the one that almost destroyed the Reagan Presidential Library in Simi Valley, started not in forests but in suburbia.

TRUMP WILL EVENTUALLY OUT THE WHISTLEBLOWER. Politico: “President Trump on Sunday reiterated his calls to reveal the name of the whistleblower behind the complaint that led to the House’s formal impeachment inquiry, mentioning unconfirmed reports about the person’s identity and possible ties to the previous administration.”

TRUMP OPEN TO SHUTTING DOWN GOVERNMENT OVER IMPEACHMENT. Playbook: “President Trump just made this month much more … interesting. Speaking on the South Lawn on Sunday, the president left the door open to a government shutdown in 17 days. First, he said ‘no, no, no’ when asked if he would shut down the government because he is being impeached. Then he said, ‘It depends on — it depends on what the negotiation — I wouldn’t commit to anything. It depends on what the negotiation is.’”

“The government shutdown date is Nov. 21 — Congress’ last day in session before the Thanksgiving break. Congress will revolt at the idea of a shutdown, and Democrats are never going to relent on impeachment because of a funding crisis. Some in the Capitol believe they can override the president’s veto of a spending bill. Needless to say, if the president is toying with a shutdown in his mind, this month might not be on autopilot as some may think.”

Jonathan Bernstein: “Is it likely? It shouldn’t be. Remember, the first rule of extended shutdowns — anything more than, say, a long weekend — is that they only happen when one side wants it and has the votes. It’s incredibly easy to keep the government’s doors open; all it takes is a one-page bill changing the expiration date, which could get through Congress in an afternoon. So even if the two sides can’t immediately reach an agreement, they could always keep the money flowing while negotiations continue.”

“Plus, Republicans should’ve learned their lesson by now. In 1994, 2013 and last winter, they thought a shutdown would be to their advantage. All three times, it turned out to be a really poor idea that didn’t work at all as a negotiating tactic and didn’t give them a boost in public opinion. This suggests they’ll be reluctant to go along with the president if he wants another one. And he’d need their support: If a temporary measure passes with the backing of both parties, Trump might well block it only to have Congress override his veto.”

TRUMP RAPE VICTIM SUES TRUMP FOR DEFAMATION. Washington Post: “A writer and longtime women’s advice columnist on Monday sued President Trump, accusing him of defaming her this summer after she claimed he sexually assaulted her two decades ago in an upscale New York City department store.”

“E. Jean Carroll publicly described the alleged assault for the first time in June, in a published excerpt of a memoir. At that time and in the new lawuit, she said that after running into the then-real estate developer at Bergdorf Goodman in late 1995 or early 1996, they chatted and shopped together before he attacked her in a dressing room. She said he knocked her head against a wall, pulled down her tights and briefly penetrated her before she pushed him off and ran out.”

DOJ WANTS INFO ON ANONYMOUS AUTHOR. “The Justice Department is trying to unearth the identity of the Trump administration official who denounced the president in a New York TimesOp-Ed last year under the byline Anonymous, according to a letter from a senior law enforcement official on Monday,” the New York Times reports.

“In the letter, Assistant Attorney General Joseph H. Hunt asked the publisher of a forthcoming book by the writer and the author’s book agents for proof that the official never signed a nondisclosure agreement and had no access to classified information or, absent that, for information about where the person worked in the government, and when.”