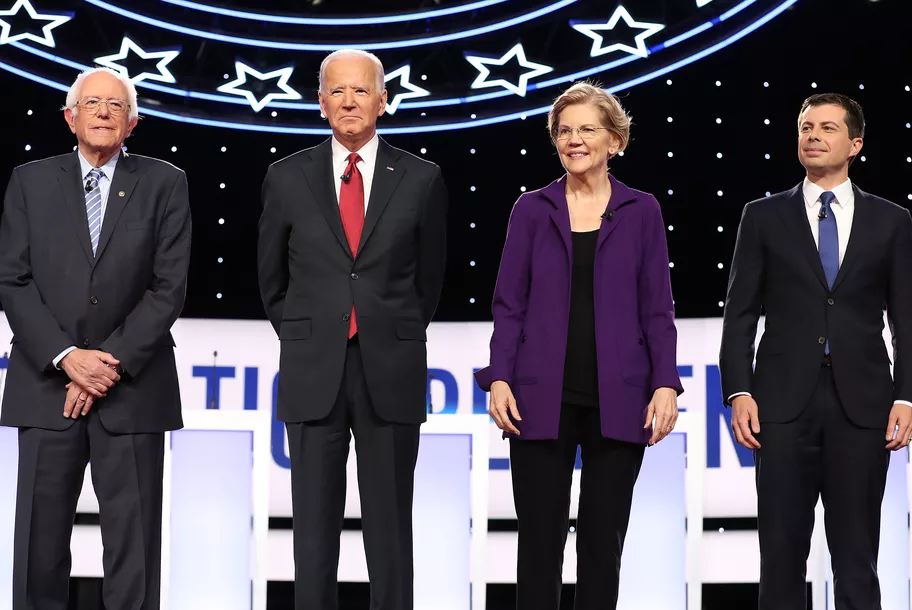 TRUMP TRAILS ALL DEMOCRATS BY DOUBLE DIGITS. “One year out from the 2020 election, President Trump trails some potential Democratic rivals in head-to-head matchups, with his national support level currently fixed at about 40%:” according to a Washington Post-ABC News poll.

“Pete Buttigieg and Sen. Kamala D. Harris, the other two Democrats tested against Trump, also lead the president among registered voters, with Buttigieg up by 52% to 41%, and Harris ahead by 51% to 42%.

Washington Post: “A new Washington Post-ABC News poll shows President Trump trailing former vice president Joe Biden by his biggest margin in any national poll since March: 17 points. It shows him trailing Sen. Elizabeth Warren (D-Mass.) by his biggest margin to date in any poll (by far): 15 points. And it also shows his deficit to Sen. Bernie Sanders (I-Vt.) is tied for the largest to-date, 14 points.”

“The biggest takeaway, though, may be that there doesn’t seem to be much difference in whom the Democrats nominate. As Democrats anxious to ‘just win baby’ confront some tough choices in the months ahead, there are indications that the differences between the candidates matter less and less to the final result.”

WILL BUTTIGIEG’S IOWA SUCCESS BE REPLICATED ELSEWHERE? New York Times: “Mr. Buttigieg’s critics say he is offering voters feel-good platitudes without a proven track record of electoral success. But his supporters say his vision, and his identity as an openly gay candidate, make him an inherently transformative figure.”

“He has successfully built a sustainable ground game throughout the state, generating buzz among voters and turning out crowds of several hundred people in towns of just a few thousand. For growing numbers of likely caucusgoers, he is emerging as the moderate front-runner in the race, ahead of even former Vice President Joseph R. Biden Jr. And he is clearly worrying some of his top rivals in the state, like Senator Elizabeth Warren of Massachusetts, who has recently started taking implicit shots at Mr. Buttigieg by needling candidates who have teams of consultants and centrist ideas.”

PARTIES POLARIZED ON IMPEACHMENT. A new Gallup poll finds 89% of Democrats currently say President Trump should be impeached and removed from office. That compares with 71% of Democrats who in 1974 said the charges against Nixon warranted his removal from office.

TWO-THIRDS ARE NOT BETTER OFF THAN THEY WERE FOUR YEARS AGO. A new Financial Times poll released Monday reveals that nearly two-thirds of voters say they are not financially better off since Trump was elected. That number includes 31% who say they are actually worse off under Trump’s tenure and another 33% who say their financial well-being is unchanged since he was inaugurated. Only 35% say they are now better off than when Trump first set foot in the Oval Office.

About half of respondents who said they were worse off blamed either slow wage growth (36%) or family debts (19%) for their declining fortunes. Respondents were also exactly evenly split on whether Trump’s policies had helped the U.S. economy, with 45% saying yes and 45% saying no.

TRUMP’S RALLY IN KENTUCKY. Politico: “President Trump came here Monday night to rally for Kentucky’s vulnerable Republican governor, but the impeachment inquiry back in Washington was foremost on his mind.”

“In a rambling speech lasting an hour and 20 minutes, the president railed against his political rivals, ramping up the invective. Democrats are ‘trying to tear our country apart,’ he told a raucous crowd here, ‘trying to nullify the ballots’ of the 63 million Americans who voted for him in the 2016 election.”

“The Steyer campaign said that it does not have possession of the data and that Democratic officials were only aware of the download, which they said was inadvertent, because they proactively notified them. Both the Democratic National Committee and S.C. Democratic Party denied that.”

That aide should be fired and Steyer should be disqualified from the next debate as punishment.

CASTRO BEGINS LAYOFFS IN SC AND NH. “Julián Castro’s campaign will fire its staff in New Hampshire and South Carolina, a source familiar with the campaign told Politico. The campaign notified the state teams on Monday and their final day will be next week.”

“The source said the campaign will continue focusing on Iowa and Nevada with a $50,000 television ad buy in Iowa beginning Tuesday morning. The moves amount to a long-shot attempt to remain in the presidential contest in the hopes of catching fire before the first contests begin next February.”

ELECTORAL COLLEGE COULD STILL SAVE TRUMP. Vox: “Depending on which reputable survey you look at, President Donald Trump’s approval rating is somewhere between 41 and 38 percent — numbers that are underwhelming at best. But a new poll from the New York Times and Siena College illustrates how Trump has a clear path to winning a second term even as he remains unpopular nationally.”

“The NYT/Siena polling — which is framed as a look at the state of the 2020 race exactly one year before Election Day — indicates the Electoral College advantage that landed Trump in the White House (despite him receiving nearly 3 million fewer votes than Hillary Clinton) is still very much in play.”

VIRGINIA DEMS BET ON OBAMACARE TO WIN ELECTION. “Virginia Democrats are betting health care will help them take control of the state legislature in November, following their rout of Republicans two years ago that nearly eliminated the GOP’s hold on the Virginia statehouse,” Politico reports.

MINORITIES WAIT TO VOTE. A new study finds voters in communities with greater minority populations and lower incomes were more likely to wait longer to cast their ballots in the 2018 midterm elections.

KAMALA BETS BIG ON GOING SMALL. “In better times, Kamala Harris’ presidential campaign was full of flash: a launch rally that drew more than 20,000 people to Oakland, a five-day summer tour of Iowa on a luxury bus with her name blazing from the side in colorful capital letters, a robust multi-state operation headquartered in Baltimore,” the Los Angeles Times reports.

“Now, the bus has been swapped for a nondescript black SUV. The campaign stops are more intimate than immense — a few dozen people in a pastoral red barn, several hundred in a pub. And her efforts have narrowed to a single make-or-break prize: Iowa.”

“To revive her flagging campaign, Harris is betting big on going small. It is a marked tonal shift and a strategy born of necessity, reflecting her dwindling cash and limp poll numbers.”