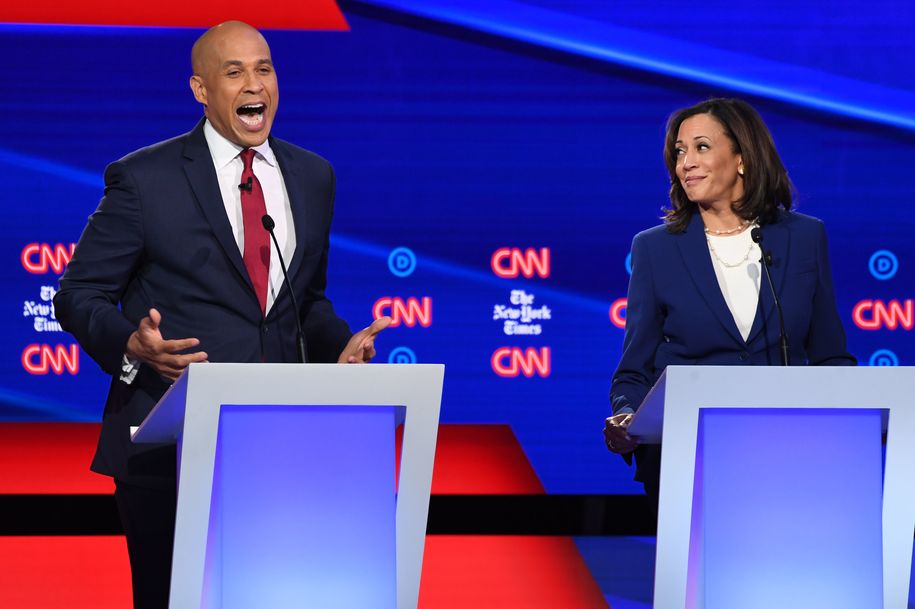 A new Emerson poll in Iowa finds Joe Biden is now tied with Elizabeth Warren for the lead in the Democratic presidential race with 23% each, followed by Pete Buttigieg at 16%, and Bernie Sanders dropping to fourth at 13%.

No other candidate reaches above 5%.

A new Pew Research poll finds 54% of Americans currently approve of the House’s decision to conduct an impeachment inquiry into President Trump, while 44% disapprove.

Wall Street Journal: “Democratic presidential candidates spent $335 million in the first nine months of the year—and a big chunk of it went to raising more money.”

“The 25 Democrats, six of whom have dropped out of the race, spent more than $50 million building lists of potential donors, buying digital advertising to lure new donors and on other expenses labeled as fundraising, such as consulting, according to a Wall Street Journal analysis of Federal Election Commission filings from Jan 1. to Sept. 30. The total cost of fundraising could be higher because campaigns have wide leeway in how they identify expenses in public filings.”

Morning Consult: “The most vulnerable Republican senators are not improving their standing in their home states ahead of a tough 2020 election cycle, while the field of potential Democratic challengers took shape and began to flex its muscle.”

“Republicans representing Colorado, Arizona, North Carolina, Maine and Iowa all saw their net approval — the share of voters who approve of a senator’s job performance minus the share who disapprove — decline between the second and third quarters of 2019.”

“Elizabeth Warren’s campaign said that it is studying a range of options for paying for ‘Medicare for All,’ leaving open the possibility that the presidential candidate may ultimately diverge from Sen. Bernie Sanders on how his sweeping health care plan — which Warren has endorsed — would be paid for,” CNN reports.

State Sen. Barbara Bollier (D), one of four Kansas legislators who made headlines last year by defecting from the Republican Party, is running for the U.S. Senate as a “pragmatic” Democrat, CBS News reports.

“The Club for Growth, a conservative advocacy group, is going up with TV ads attacking Sen. Mitt Romney — a preemptive warning shot against fellow Republicans who are considering getting behind impeachment,” Politico reports.

“The 30-second commercial, which will begin running Thursday digitally and on Fox News stations in Utah, portrays Romney as a sunglasses-wearing spy and accuses him of being a ‘Democrat secret asset’ who is ‘plotting to take down President Trump with impeachment.’”

“Joe Biden’s presidential campaign is bleeding cash. And a big reason why appears to be an antiquated, higher-end approach to electoral politics that the former vice president has adopted,” the Daily Beast reports.

“Biden’s team spent more than $923,000 on private jets during the third quarter of 2019… accounting for roughly one out of every 16 dollars the campaign raised.”

“It’s not uncommon for candidates to lean on private jets as they crisscross the country in an effort to keep a schedule packed with speeches, rallies, and debates. But a review of Biden’s expenditures suggest that a good deal of what he’s spending money on currently involve efforts to simply raise more money.”

Politico: “Stalled in the polls and on the heels of another uninspiring debate performance, Joe Biden’s campaign was forced to respond to another troubling issue Wednesday: his lackluster fundraising. Just months ago, Biden’s initial cash haul surprised naysayers who doubted he could compete with the money-minting machines that is Elizabeth Warren and Bernie Sanders. But now the former vice president is bleeding money.”

“Biden spent almost $2 million more than his presidential campaign raised last quarter, a predicament caused by sluggish fundraising coupled with the expenses of maintaining a big payroll and a nationwide operation.”

Joe Biden went off on Elizabeth Warren’s “ridiculous” healthcare plan, and accused the Massachusetts senator — as well as Bernie Sanders — of “playing Trump’s game and trying to con the American people,” Mediaitereports.

Said Biden: “It’s fascinating that the person who has a plan for everything has no plan for the single most consequential issue in this election in the minds of the American people, across the board.”

He added: “I mean, look, I don’t want to pick on Elizabeth Warren, but this is ridiculous. The idea that someone is going to be able to go out and spend what turns out to be, if you add on everything that’s going to be free beyond Obamacare, excuse me beyond Medicare for All, which is it’s going to come out to about 3.4 trillion dollars a year. That’s bigger than the entire federal budget. Every single thing. And on top of that, a wealth tax. Well the wealth tax, once you get to 27 trillion over time, whatever the number is, it doesn’t even get close to paying for any of this.”

More: “And God love Bernie, and it was really good, I really mean it, to see him so healthy and moving last night, I really mean that… But Bernie, Bernie doesn’t pay for half his plan.”

Pete Buttigieg has continued his criticism of Sen. Elizabeth Warren after the debate, saying she has been “more specific and forthcoming about the number of selfies she’s taken” than about how she would pay for “Medicare for All,” CNN reports.

It’s a shift in strategy for the mayor who largely avoided attacking his rivals.

In fact, back in February, Buttigieg told MSNBC that Medicare for All is the “compromise position” since it’s a public payer and private doctors. Now, he’s running attack ads against the plan calling it “polarizing.”

“I, Pete Buttigieg, politician, do henceforth and forthwith declare, most affirmatively and indubitably, unto the ages, that I do favor Medicare for All, as I do favor any measure that would help get all Americans covered.” — Mayor Pete Buttigieg, responding to activists on Twitter, February 18, 2018.