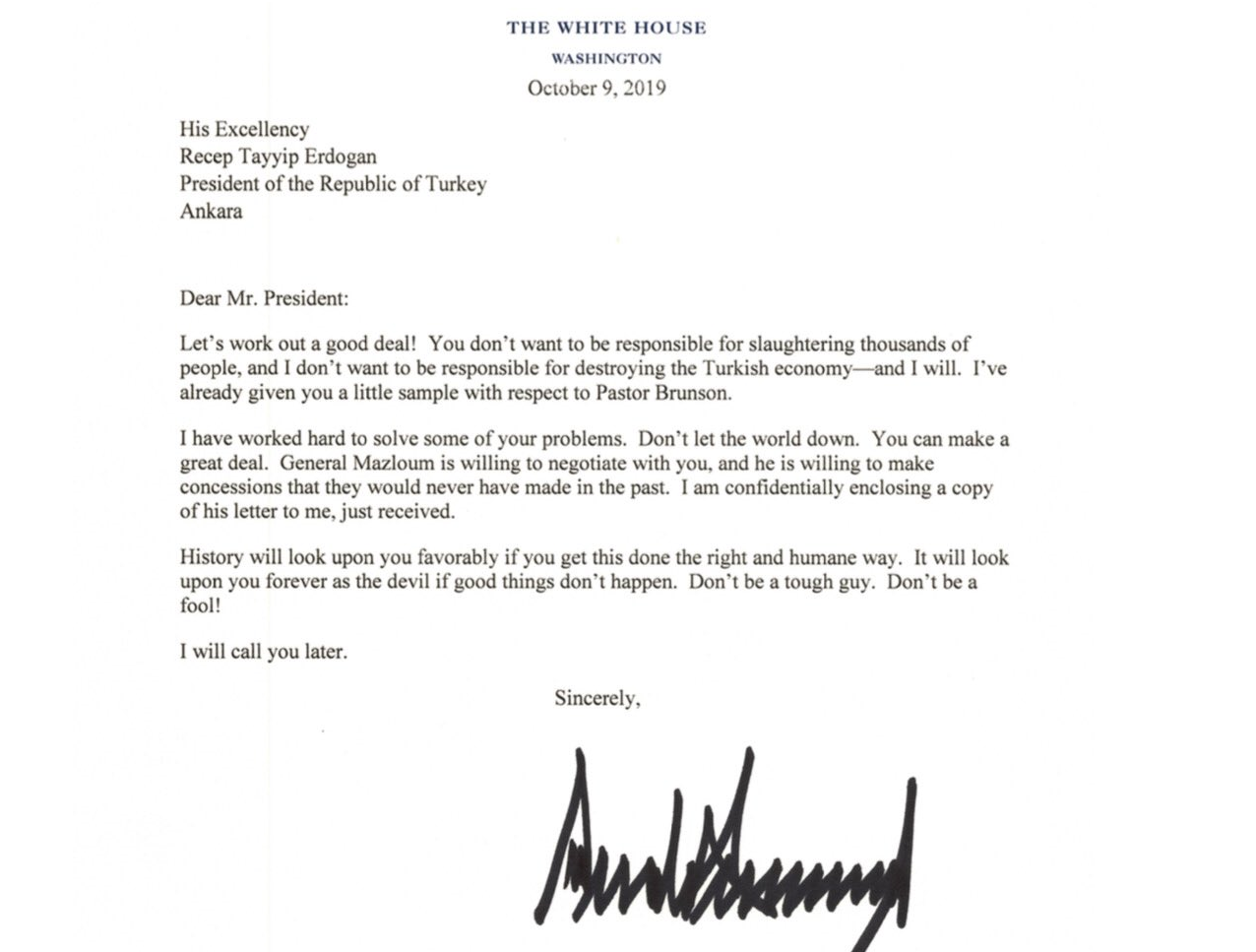 The House of Representatives voted overwhelmingly to condemn President Trump’s troop withdrawal from northern Syria, 354 to 60, just hours after the president called his decision “strategically brilliant.”

Then a congressional delegation, including Republicans and Democrats went over to the White House for a Cabinet Room meeting with the President. It did not go well.

Talking to reporters after a White House meeting on Syria, Speaker Nancy Pelosi said President Trump was having a “meltdown,” Axios reports. Said Pelosi: “What we just witnessed on the part of the President was a meltdown.” Senate Minority Leader Chuck Schumer said the meeting wasn’t a “dialog” it was a “diatribe.”

Fox Business obtained a copy of a remarkable letter from President Trump’s letter to Turkey President Recep Tayyip Erdogan warning him not to slaughter thousands of people.

He ends the letter: “I will call you later.”

“The subpoena seeks documents related to Mr. Giuliani’s business dealings with Ukraine and his involvement in efforts to oust the U.S. ambassador in Kyiv, as well as any interactions between Mr. Sessions, Mr. Giuliani and four of Mr. Giuliani’s associates who were indicted last week on campaign-finance and conspiracy accounts.”

“Mr. Giuliani is the primary focus of the subpoena.”

“For months, investigators looking into Rudy Giuliani’s business dealings in Ukraine have dug into everything from possible financial entanglements with alleged corrupt Ukrainian figures to counterintelligence concerns raised by some of those business ties,” CNN reports.

“The counterintelligence part of the investigation indicates that FBI and criminal prosecutors in Manhattan are looking at a broader set of issues related to Giuliani, President Trump’s personal attorney, than has been previously reported.”

“Michael McKinley, the former senior adviser to Secretary of State Mike Pompeo until his sudden resignation last week, will tell House impeachment investigators Wednesday that career diplomats were mistreated during his tenure and some had their careers derailed for political reasons,” the Washington Post reports. “McKinley will outline how his concerns culminated with the recall of the U.S. ambassador to Ukraine, Marie Yovanovitch, a punitive action he and many other rank-and-file diplomats viewed as wholly unjustified.”

The New York Times reports that McKinley told impeachment investigators that he resigned because he was upset that the Trump administration had wrestled Ukraine policy away from career diplomats. “McKinley’s testimony was the latest in a string of accounts given by top career diplomats and administration officials to impeachment investigators about how experts were sidelined as the president pursued his own agenda on Ukraine.”

House Democrats have also asked Bill Taylor, acting ambassador to Ukraine, to appear at a Congressional deposition next week, NBC News reports. Taylor wrote in a text that it was “crazy” to hold military aid for a political investigation. CNBC reports Taylor has left Ukraine and is headed back to the United States.

“Donald Trump’s national security adviser heaped pain and grief on the parents of a British teenager killed in a car crash by trying to hold a meeting at the White House between them and a U.S. diplomat’s wife who was involved,” Reuters reports.

“Charlotte Charles and Tim Dunn were invited to a surprise meeting with the U.S. president at his office on Wednesday where they were further shocked to learn that Anne Sacoolas, the American woman involved in the fatal crash, was in the building.”

“Mark Stephens, the lawyer for Charles and Dunn, said national security adviser Robert O’Brien had the idea of overseeing a coming together of the families before they would then hug in front of an assembled media.”

ProPublica: “Documents obtained by ProPublica show stark differences in how Donald Trump’s businesses reported some expenses, profits and occupancy figures for two Manhattan buildings, giving a lender different figures than they provided to New York City tax authorities. The discrepancies made the buildings appear more profitable to the lender — and less profitable to the officials who set the buildings’ property tax.”

“For instance, Trump told the lender that he took in twice as much rent from one building as he reported to tax authorities during the same year, 2017. He also gave conflicting occupancy figures for one of his signature skyscrapers, located at 40 Wall Street.”

Turkish President Recep Tayyip Erdogan has said he will refuse to meet with Vice President Mike Pence, who is due to travel to Turkey to argue for a ceasefire in the ongoing Syria conflict, NBC News reports. Said Erdogan: “I’m not going to talk to them. They will be talking to their counterparts. When Trump comes here, I’ll be talking.”

Earlier, Pence and Secretary of State Mike Pompeo announced that they were traveling to meet with Erdogan in Ankara on Thursday to relay President Trump’s demand that Mr. Erdogan negotiate a cease-fire in Syria and to reiterate the president’s threat to impose economic sanctions if he does not comply,” the New York Times reports. But Erdogan tells Reuters: “They say ‘declare a ceasefire.’ We will never declare a ceasefire. They are pressuring us to stop the operation. They are announcing sanctions. Our goal is clear. We are not worried about any sanctions.”

“President Trump has for weeks sought to unmask the whistle-blower who shed light on his Ukraine dealings. But instead aides have fixated on one another: Advisers began a fact-finding review that some fear is a hunt for a scapegoat, according to White House aides and other people familiar with it,” the New York Times reports.

“Even as the impeachment inquiry intensifies in Congress, White House lawyers are leading their own review, the people said. They are seeking to understand White House officials’ actions around Mr. Trump’s July 25 call with President Volodymyr Zelensky of Ukraine, which is central to the whistle-blower’s allegation that Mr. Trump abused his power.”

Sen. Mitt Romney (R-UT) lashed out at the Trump administration saying it paved the way for Turkey’s invasion of northern Syria and that it was “disingenuous” to be surprised by Ankara’s actions, The Hill reports.

Said Romney: “This was a decision by the administration which had the clearly observable result that we’re seeing. To have the vice president and the secretary of State going to meet with Erdoğan and suggesting that somehow we’re surprised by what’s happening is disingenuous.”

He added: “Very clearly it was a decision by the administration that which has led to what you’re seeing. This is a bit like the farmer locking the barn door after the horse has left.”

Politico: “Republicans unleashed perhaps their most aggressive outcry of the Trump era after he abandoned the U.S.’s Kurdish allies and ceded northeastern Syria to Turkey. But now GOP lawmakers are dialing back their direct criticism of the president — instead working with Trump, dinging Democrats and trying to move forward.”

“House Democrats will not hold a vote to authorize an impeachment inquiry into President Trump as of now, House Speaker Nancy Pelosi said Tuesday, defying calls from the White House and Republicans to do so,” CNBC reports.

“The decision to hold off on a formal vote comes amid growing pressure from Republican lawmakers and White House officials who have criticized House Democrats’ efforts as an illegitimate attempt to undermine Trump’s presidency.”

“But many members of Pelosi’s caucus want to avoid the perception that the White House is dictating how the House, as part of a separate and equal branch of government, conducts itself.”

Jonathan Bernstein: “It turns out that the bureaucracy isn’t just a check on the president’s ability to get what he wants; it’s a critical source of expertise on the difficult tasks of governing a country of more than 300 million people that also happens to be the most powerful in the world. When a president decides to spy on his domestic opponents even after the agencies that normally do such things turn him down, you get the ‘plumbers’ and the Watergate criminals and the clownish cover-up. When a president decides (or passively allows) the National Security Council staff to carry out an arms-for-hostages swap with the profits diverted elsewhere, despite congressional prohibitions and executive-branch reluctance, you get Oliver North sending a cake and a bible to Iran.”

“This time, it’s Trump’s personal lawyer Rudy Giuliani and a cast of other characters in and out of government who apparently forced out the U.S. ambassador to Ukraine so they could run the show themselves on behalf of a president who is even less willing to accept the constraints of the job than Richard Nixon was. The results were, as always, comically tragic. Or tragically comic. We can only hope that future presidents finally learn this lesson and stop trying to find shortcuts around the executive branch. It just doesn’t work.”

“A federal appeals court on Tuesday revived a lawsuit claiming President Trump is illegally profiting from foreign and state government visitors at his hotel in downtown Washington,” the Washington Post reports.

“The full U.S. Court of Appeals for the 4th Circuit agreed to rehear the lawsuit, brought by the attorneys general of Maryland and the District of Columbia, that was dismissed last summer by a three-judge panel of the same court. The brief order set oral argument for Dec. 12, and essentially gives the novel lawsuit testing the anti-corruption emoluments provisions of the Constitution a second chance.”

“A former top White House foreign policy adviser told House impeachment investigators this week that she viewed Gordon Sondland, the United States ambassador to the European Union, as a potential national security risk because he was so unprepared for his job,” the New York Times reports.

“The adviser, Fiona Hill, did not accuse Mr. Sondland of acting maliciously or intentionally putting the country at risk. But she described Mr. Sondland, a hotelier and Trump donor-turned-ambassador, as metaphorically driving in an unfamiliar place with no guardrails and no GPS.”