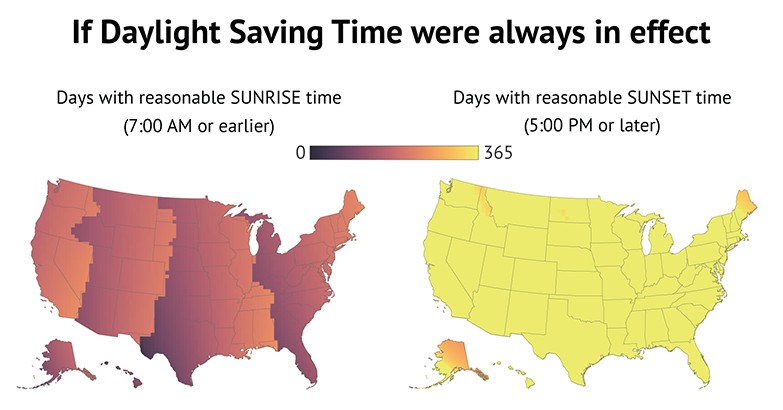 The Senate has passed Senate Bill 73, a bill that would request that the U.S. Department of Transportation move the First State into the next time zone to the east, known as the Atlantic Standard Time Zone, if the neighboring states of Pennsylvania, Maryland, New York and New Jersey enact similar laws to move into the Atlantic Time Zone. Essentially, doing this would keep us in Daylight Savings Time all year round.

The vote was 17-4. The masochists who enjoy 4 pm sunsets in winter are Colin Bonini (of course), Ernie Lopez, Bryant Richardon and Dave Lawson.

“This might seem like a trivial effort to some, but there is a growing body of evidence that these clock changes are contributing to some serious health risks, including spikes in heart attacks, strokes and pedestrian fatalities,” said prime sponsor Senate President Pro Tempore David McBride. “My colleagues and I here in the Delaware Senate – and in legislatures around the country – believe the time has come for Delaware and the rest of the nation to have a conversation about whether this social experiment still makes sense from a public policy perspective.”

More than half of the nation’s state legislatures are weighing bills to end the clock-changing – the most since the National Conference of State Legislatures began tracking the topic in 2014. Washington state, Oregon, and Florida have already passed similar legislation this year.

The process for moving into a different time zone is complicated on many levels. First of all, we are a small state where many residents work in four neighboring states, and residents of those four neighboring states also work in Delaware. Hence the requirement that Pennsylvania, New Jersey, New York and Maryland take action to join us in the Atlantic Time Zone before the law takes affect in Delaware.

Second, we can’t just do this on our won. After we get our neighbors to go along with us, then we have to ask the U.S. Department of Transportation to move Delaware into the Atlantic Standard Time Zone. And I guess we have to ask nicely. So that is all this Senate Bill does.

I would imagine this bill will go no where in the House. Speaker Schwartzkopf does not seem inclined to do McBride any favors, not after McBride’s actions on the gun bills this term.

WHERE IS THE BILL? Passed Senate 17-4. Sent to House for consideration.