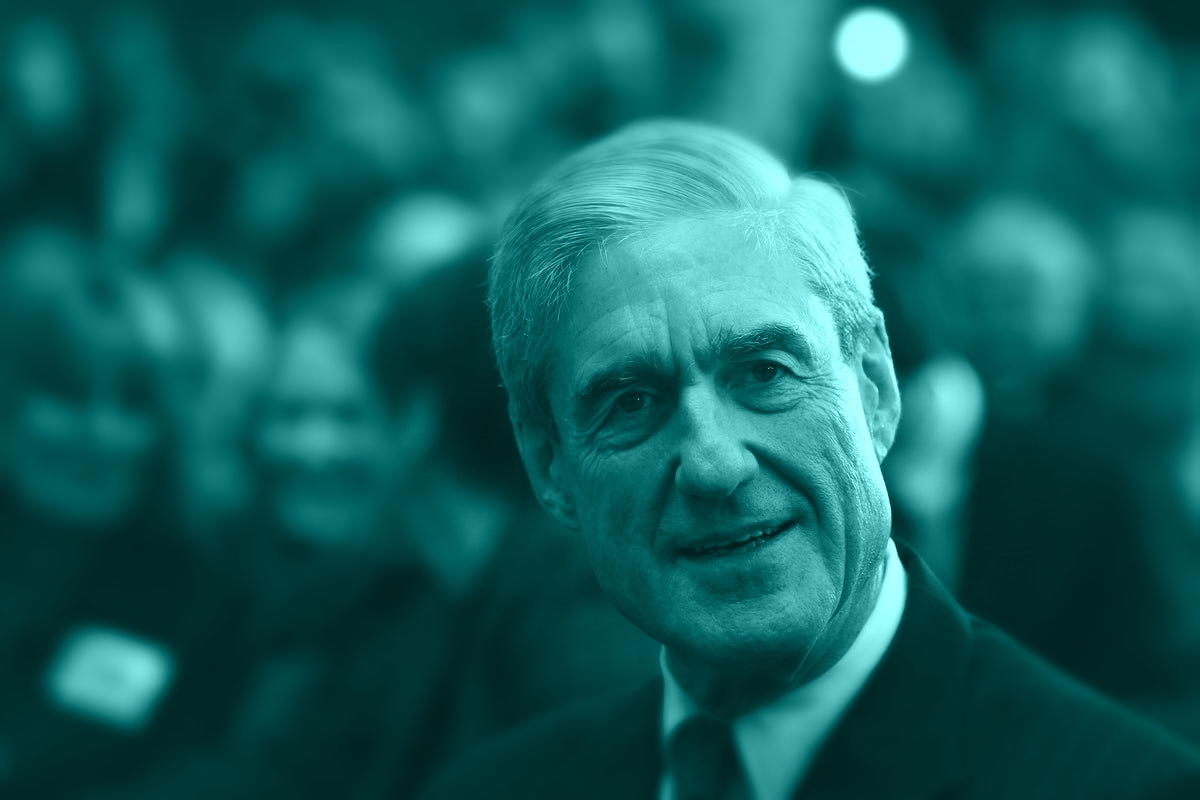 “Here is the other bottom line: The Mueller Report describes a president who, on numerous occasions, engaged in conduct calculated to hinder a federal investigation. It finds ample evidence that at least a portion of that conduct met all of the statutory elements of criminal obstruction of justice. In some of the instances in which all of the statutory elements of obstruction are met, the report finds no persuasive constitutional or factual defenses. And yet, it declines to render a judgment on whether the president has committed a crime.”

“Now, the House must decide what to do with these facts.”

Josh Marshall: “The simple takeaway from the Mueller Report is the President betrayed his country and spent two years lying and breaking the law to try to hide that fact. He should resign and be tried for his crimes.”

“President Trump has spent the last two years denouncing the ‘fake news’ media, and yet some of the key moments in Robert Mueller’s report were uncovered or bolstered through journalists’ investigative scrutiny,” the New York Times reports.

“The report reveals a lot we didn’t know about how the president and his aides responded to overtures from Russia and how they attempted to thwart investigations. But many of the bombshells in the document were first reported by the press.”

President Trump stepped up his attacks against special counsel Robert Mueller early Saturday morning, claiming Mueller’s recently released report “was written as nastily as possible” by “true Trump Haters,” The Hill reports. Trump lashed out at Mueller calling him “highly conflicted” and once again declaring the special counsel’s investigation “the greatest Witch Hunt in U.S. political history.” On Sunday, Trump continued to wage an attack against special counsel Robert Mueller, calling his investigation’s report a “hit job” and claiming it was written by “The Trump Haters and Angry Democrats,” The Hill reports. Said Trump: “The Trump Haters and Angry Democrats who wrote the Mueller Report were devastated by the No Collusion finding. Nothing but a total ‘hit job’ which should never have been allowed to start in the first place!”

I thought the Mueller Report was a total exoneration. So why is he so angry?

“President Trump seethed Friday over the special counsel’s portrayal of his protracted campaign to thwart the Russia investigation and directed much of his ire at former White House counsel Donald McGahn, whose ubiquity in the report’s footnotes laid bare his extensive cooperation in chronicling the president’s actions,” the Washington Post reports.

“Some of the report’s most derogatory scenes were attributed not only to the recollections of McGahn and other witnesses but also to the contemporaneous notes kept by several senior administration officials — the kind of paper trail that Trump has long sought to avoid leaving.”

CNN: “Perhaps more angering to a leader who detests weakness — but doesn’t necessarily mind an amoral reputation — were the number of underlings shown ignoring his commands, privately scoffing at the ‘crazy shit’ he was requesting and working around him to avoid self-implication.”

“Now, those close to him say Trump is newly furious at the people — most of whom no longer work for him — whose extensive interviews with the special counsel’s office created the epic depiction of an unscrupulous and chaotic White House. And he’s seeking assurances from those who remain that his orders are being treated like those of a president, and not like suggestions from an intemperate but misguided supervisor.”

Washington state Sen. Maureen Walsh (R) “has drawn the wrath of state nurses after she said on the floor of the Senate that some nurses may spend a considerable part of their day playing cards,” the Spokesman-Review reports.

“The Washington State Nurses Association posted a blog about Walsh’s comments on its website, drawing so many readers that the site crashed for a time on Friday.”

However, he said that he was “not there yet” with impeachment, and he added that Congress has to be “careful.”

Boston Globe: “Democrats may also try to amplify some of Mueller’s most damning findings by calling former Trump staffers to testify about the president’s persistent orders to interfere with the investigation.”

“Mueller’s report suggests the president is hyper-attuned to the power of televised hearings to dominate the news and shape narratives about his presidency — and that he won’t hesitate to try to influence or shame witnesses. And his penchant for trying to derail investigations into his conduct is already evident in how his administration is handling the new Democratic majority in the House”

Evangelist Franklin Graham wrote a Facebook post which denounced people heckling Pete Buttigieg at a campaign event, but also managed to work in a verse from the Bible that condemns gay people to death.

Graham suggested Buttigieg cannot be both gay and Christian, citing Leviticus 20:13: “If a man lies with a male as with a woman, both of them have committed an abomination…”

But, as Hemant Mehta points out, Graham left off the last part of the verse in his post: “… they shall surely be put to death; their blood shall be upon them.”

“The FBI arrested a 69-year-old New Mexico man who allegedly illegally detained immigrants crossing the border under the guise of working for the United States Border Patrol,” the Daily Beast reports.

“Larry Mitchell Hopkins, who runs The United Constitutional Patriots (UCP), an armed border militia group that spreads far-right conspiracies and rounds up asylum seekers on the border, was arrested by FBI in New Mexico Saturday on charges of possessing firearms and ammunition as a convicted felon.”

New York Times: “After sidestepping the explosive issue of impeachment for months by citing the inquiry by the special counsel, Robert S. Mueller III, most of the other 17 Democratic presidential candidates have responded to the special counsel’s report with tentative remarks about impeaching Mr. Trump, demands for the unredacted Mueller findings, calls for further hearings or attempts to simply change the subject.”

“Anything, that is, to avoid clearly answering the question of whether lawmakers should remove the president from office.”

“Underpinning the candidates’ calculations are complex sets of short- and long-term incentives. Democratic hopefuls could receive a fund-raising boost by embracing impeachment and energizing liberal donors. But some strategists and lawmakers say that a failed effort would only strengthen Mr. Trump’s re-election chances, allowing him to claim further vindication.”

Washington Post: “Most strategists planning for the general election campaign against Trump expect to focus far less on Trump’s behavior and personal qualities than Hillary Clinton did in the 2016 election.”

Washington Post: “For decades, Democrats and Republicans have hailed America’s business elite, especially in Silicon Valley, as the country’s salvation. The government might be gridlocked, the electorate angry and divided, but America’s innovators seemed to promise a relatively pain-free way out of the mess. Their companies produced an endless series of products that kept the U.S. economy churning and its gross domestic product climbing. Their philanthropic efforts were aimed at fixing some of the country’s most vexing problems. Government’s role was to stay out of the way.”

“Now that consensus is shattering. For the first time in decades, capitalism’s future is a subject of debate among presidential hopefuls and a source of growing angst for America’s business elite. In places such as Silicon Valley, the slopes of Davos, Switzerland, and the halls of Harvard Business School, there is a sense that the kind of capitalism that once made America an economic envy is responsible for the growing inequality and anger that is tearing the country apart.”

“The Supreme Court this week takes up the most consequential Trump administration initiative since last term’s travel ban, with the justices considering whether a question about citizenship can be added to the 2020 Census,” the Washington Post reports.

“The time frame for a decision will be tight, as the Census Bureau must know by the end of June whether the question may be included on the 2020 form. Arguments are scheduled for Tuesday.”

The Guardian: “If the tone of these secret conversations, revealed in Mueller’s long-awaited report this week, remind you of Tony Soprano – the amoral, brooding, charismatic, philandering, thuggish crime boss in the eponymous TV drama – ordering a hit on one his enemies, you are not alone.”

“Over 448 pages, Mueller does not present Trump as a traitor but does portray him as a serial liar willing to abuse power, shred norms and bend the rule of law in a White House rotten to the core. Amid this culture of malfeasance and mendacity, trusted lieutenants are expected to demonstrate absolute loyalty, up to and including obstructing justice to save the president’s skin.”

ProPublica: “Since 2015, thousands of complaints have streamed in — from citizens, public interest groups, IRS agents, government officials and more — that C4s are abusing the rules. But the agency has not stripped a single organization of its tax-exempt status for breaking spending rules during that period. (A handful of groups have had their status revoked for failing to file financial statements for three consecutive years.) Most cases do not even reach the IRS committee created to examine them.”