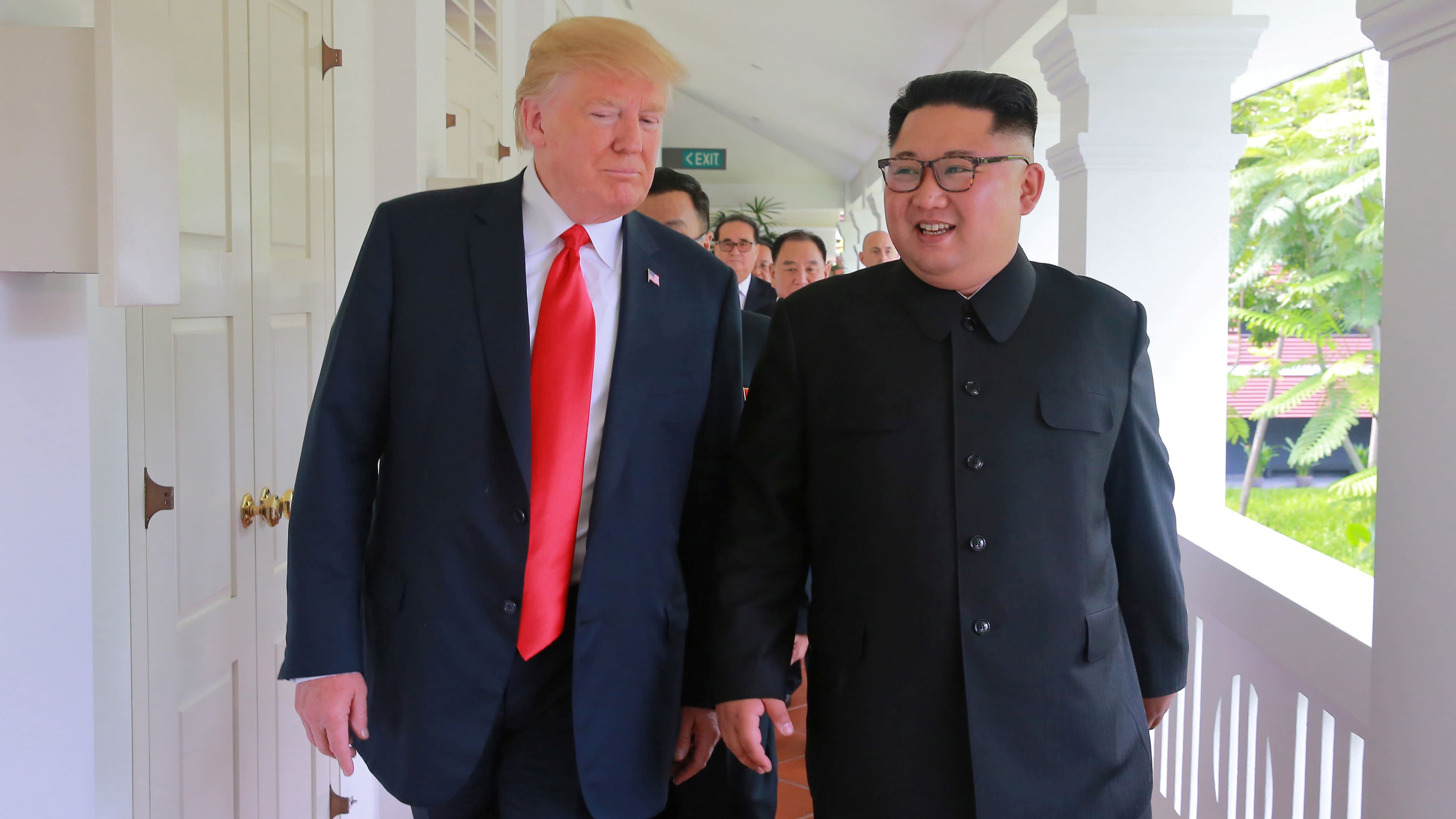 “North Korea is pursuing the ‘rapid rebuilding’ of the long-range rocket site at Sohae Launch Facility,” NBC News reports. “Sohae Satellite Launching Station, North Korea’s only operational space launch facility, has been used in the past for satellite launches. These launches use similar technology to what is used for intercontinental ballistic missiles.”

President Trump signaled the White House will not comply with a barrage of congressional investigations, accusing Democrats in the House of launching the probes to hurt his chances of winning reelection in 2020, The Hill reports. Said Trump: “It’s a disgrace to our country. I’m not surprised that it’s happening. Basically, they’ve started the campaign. So the campaign begins.”

“The federal budget deficit ballooned rapidly in the first four months of the fiscal year amid falling tax revenue and higher spending, the Treasury Department said Tuesday, posing a new challenge for the White House and Congress and they prepare for a number of budget battles,” the Washington Post reports. “The deficit grew 77% in the first four months of fiscal year 2019 compared with the same period one year before, Treasury said.”

Sen. Bernie Sanders (I-VT) signed a pledge saying he would seek the presidency as a Democrat and govern as a Democrat if elected, the Washington Post reports. “The move comes in response to a new rule from the Democratic National Committee that requires all candidates for the party’s 2020 presidential nomination to sign such a pledge — a change that some Sanders allies considered a swipe at the senator.”

Well, if you are going to run for the Democratic nomination, it helps that you are a Democrat.

Michael Bloomberg announced that he would not run for president, “concluding his path to the Democratic nomination was narrow and he could accomplish more as a private citizen,” the Washington Post reports. Said Bloomberg: “I believe I would defeat Donald Trump in a general election. But I am clear-eyed about the difficulty of winning the Democratic nomination in such a crowded field.”

“In place of a candidacy, Bloomberg has committed to funding a new independent political operation with the goal of preventing the reelection of President Trump, with intensive voter targeting and outreach in swing states over the next 18 months.”

“A federal judge warned Roger Stone, the flamboyant political operative under indictment as part of the Russia investigation, that his latest book could violate an order prohibiting him from talking about the case,” USA Today reports. “She gave him until Monday to explain himself.”

Said U.S. District Judge Amy Berman Jackson: “It does not matter when the defendant may have first formulated the opinions expressed, or when he first put them into words: he may no longer share his views on these particular subjects with the world.”

“During a Senate Health Committee hearing on Tuesday, Sen. Rand Paul (R-KY) criticized the idea that parents should be required to vaccinate their children and perpetuated the notion that vaccines themselves could cause harm,” the Daily Beast reports.

“The speech, which came during the opening moments of the hearing, was framed as an argument in favor of personal liberty, a posture that Paul routinely adopts. But in offering his thoughts, the Kentucky Republican furthered the argument that it is socially reasonable not to vaccinate your kids—a mindset that the scientific community says is already worsening communal health crises.”

“House Democrats are girding for a fight over President Trump’s tax returns, one that will likely lead all the way to the Supreme Court,” ABC News reports.

“A team of four attorneys has been guiding the House Ways and Means Committee, which has the authority to request the IRS documents from the Treasury Department. They have been actively crafting what they hope will be an ‘air-tight’ legal strategy to compel the president to hand over 10 years of his personal tax returns, working on the assumption their request will be challenged by the courts.”

“T-Mobile’s patronage of President Trump’s Washington hotel increased sharply after the announcement of its merger with its Sprint last April, with executives spending about $195,000 at the property since then, the company told congressional Democrats in a letter last month,” the Washington Post reports.

“Before news of the megadeal between rival companies broke on April 29, 2018, the company said, only two top officials from T-Mobile had ever stayed at Trump’s hotel, with one overnight stay each in August 2017.”

Michael Gerson: “Trump’s CPAC speech was a bold assertion that he has learned nothing — absolutely nothing — during his first two years in office. Not manners. Not economics. Not geopolitics. Not simple decency.”

“Having gotten that out of my system, let me turn to what really bothered me. Our president lacks dignity. The president has made the denial of dignity to certain people and groups a political rallying cry. This kind of cruelty and dehumanization is the defining commitment of his political life. He is not merely undignified as a leader; he is committed to stripping away the dignity possessed by others.”

“There is a tie between incivility and injustice. When a president uses his office to demean others, he is undermining an essential democratic premise — that those out of power are still protected from abuse by general respect for their inherent worth and dignity. They are still partners in a common enterprise. And they deserve better than cruelty and contempt.”

An attorney for Michael Cohen, Donald Trump’s former personal lawyer, raised the possibility of a pardon with attorneys for the president after federal agents raided Cohen’s properties in April, the Wall Street Journal reports. The attorney hinted that Cohen would consider cooperating with prosecutors if he did not receive a pardon. Trump’s attorneys rejected the idea, but Rudy Giuliani left the door open to a pardon down the road.

“President Trump is taking a surprisingly low-key approach to a bipartisan rebuke on his border wall and the first likely veto of his presidency,” Politico reports. “At least for now, Trump is doing little to try and dissuade the approximately dozen Republican senators who are considering voting to block his national emergency declaration on the southern border, according to Republican senators and aides.”

“Despite previous warnings that GOP lawmakers could put themselves in ‘great jeopardy’ by defying him, wavering senators said Trump is not directly lobbying them to stick with him. And White House officials are making only modest efforts to turn things around on Capitol Hill, taking a hands-off approach to an imminent rebuke on the Senate floor this month.”

Playbook: “The vote against Trump’s emergency declaration is now practically a free vote. It’s going down, so if you’re a Republican and want space from the president, this is an easy way to do it.”

“In 2011, days after Donald Trump challenged President Barack Obama to ‘show his records’ to prove that he hadn’t been a ‘terrible student,’ the headmaster at New York Military Academy got an order from his boss: Find Trump’s academic records and help bury them,” the Washington Postreports.