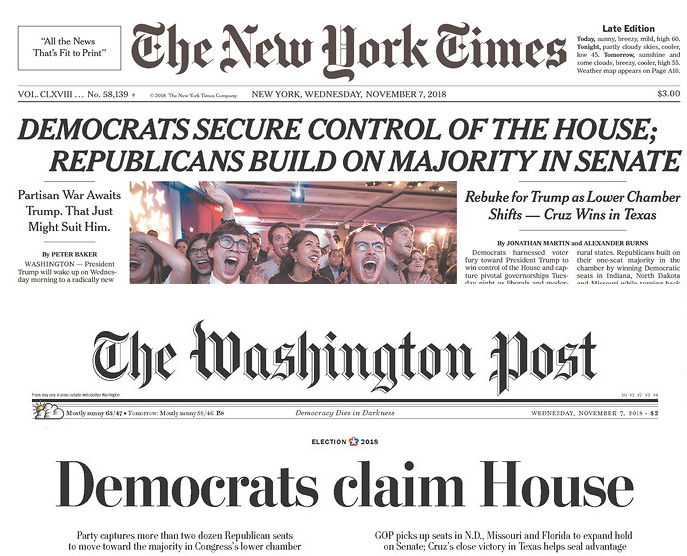 Well, my outrageously delusional (in hindsight) and optimistic projections did not bear fruit last night (such as the Dems winning in Georgia and Florida and Texas and winning over 73 seats and taking the Senate), but at least we ended one party rule in Washington and gave Donald the Dictator some checks and balances.   Democrats won the House with 8-9% of the popular vote, a larger swing than Republicans received in 2010 and 1994 or the Democrats received in 2006.   They will pick up 35+ seats (the final number still to be determined and could go as high as 41 seats) and have over 230 Democrats in the House.  That is an important victory, even if our rock star trifecta of Beto, Stacey and Andrew lost, and even if the Republicans took some red state Senate seats away from us.

So … Dems take House + a bunch of governorships + pass a bunch of left-leaning ballot initiatives + lose fewer Senate seats than they had any right to based on the map.

Why is the developing narrative that "welp, it wasn't a blue wave after all!"?

And the fact that the GOP gets a split decision in the Senate is not a victory for them.  Aaron Blake: “If [Republicans] hold [the Senate] or even gain some seats, you can guarantee they’ll cite it as a win, and possibly even a split decision overall.”

“This will be false.”

”Yes, Republicans would technically be improving their lot in the Senate, while Democrats would be surging in the House… But it would also owe almost completely to some highly unusual circumstances — for which there is very little historical precedent — and it wouldn’t exactly indicate an evenly split electorate.”

Forget the Senate. The midterms were still a major rebuke of Trump and the Republican Party. https://t.co/dGRiU8k3Iz pic.twitter.com/mbxo0rDgQc

“Democrats wrested control of governorships from Republicans in seven states on Tuesday including Wisconsin, where they ousted Scott Walker after eight tumultuous years as the state’s chief executive, and Kansas, a surprise victory in a longtime Republican stronghold,” the New York Times reports.

“But Republicans fended off strong Democratic challenges to hold on to the governorships of Florida, Ohio and Iowa, maintaining their control of three states likely to be crucial in the 2020 presidential elections.”

“The victories expanded the number of states with Democratic chief executives — an important consideration as legislatures begin the process of drawing congressional district lines. In addition to Kansas and Wisconsin, Democrats also picked up governor’s seats in Nevada, Illinois, Michigan, New Mexico and Maine.”

“After upending Wisconsin politics and infuriating liberals across the country, Gov. Scott Walker (R) narrowly lost his bid for a third term Tuesday to Tony Evers (D), the leader of the education establishment Walker blew up eight years ago,” the Milwaukee Journal Sentinel reports.

Trump's political rise was so stunning that the media is scared to say about him what we would say about any other president polling this badly, and who lost the House, amidst this economy.

He's failing politically. He's an anchor on his party. https://t.co/GXWJxsFw1O

“Armed with subpoenas and a long list of grievances, a small group of lawmakers will lead the investigations poised to make President Donald Trump’s life a lot tougher now that Democrats have won a majority in the U.S. House of Representatives,” Reuters reports.

“Using their control of House committees, they can demand to see Trump’s long-hidden tax returns, probe possible conflicts of interest from his business empire, and dig into any evidence of collusion between Russia and Trump’s campaign team in the 2016 election.”

Said Smith: “Well he didn’t want to talk about it until after this race. He was planning on going to the United States Senate and he had committed to serving for six years so he didn’t entertain the conversation. You know there will be drumbeats about this guy for the next two years because he energized people not just in Texas but around the country in a way that was really quite remarkable.”

my interview with her as Democrats recaptured the Househttps://t.co/NFlz5h8avL

“Democrats have won back control of the House of Representatives, slicing through Republican-held suburbs where President Trump has proven toxic to undo a Republican majority once thought to be impervious until the next round of redistricting,” Politico reports.

“From Florida to Texas to Illinois, Republican incumbents who survived reelection in 2016 even as Trump lost their districts fell decisively to Democratic challengers who linked them to the president and attacked their votes on health care and taxes last year, delivering a check-and-balance message to the president.”

“The results sprang from a fundamental realignment of the Republican Party, which has withdrawn from its old suburban bastions under Trump and established new strength in rural areas.”

Said former Rep. Tom Davis (R-VA): “The GOP base has migrated from the country club to the country.”

“Female candidates for Congress made history on Tuesday night, with more than 100 women sweeping into office on the strength of a Democratic House takeover powered in large part by college-educated female voters,” Politico reports.

“The women winning House seats also marked several milestones for diverse representation beyond the gender divide, including the first Native American women in Congress and the first Muslim women in Congress. Their victories mark an undeniable leap forward toward representation on Capitol Hill that more closely resembles the divide among the U.S. population, although women still have a long way to go before reaching parity in both the House and Senate.”

Here Are Some Of The Historic Firsts From The Midterm Elections https://t.co/4e0G2mMwCl via @juliareinstein

NBC News: “No one could say voters were caught off guard this time. Turnout soared in comparison to prior midterms. And once again, many of the trends that helped elect Trump, even as he lost the popular vote, held true.”

“Just like in 2016, rural voters in 2018 turned out in droves to elect Senate candidates in states Trump won, like Indiana, Missouri, North Dakota and even purple Florida.

“But, in another echo of 2016, Trump did catastrophic damage to Republicans in the suburbs, long a traditional source of strength for the GOP. From Fairfax, Virginia, to Dallas, Texas, these angry voters made it clear early that Democrats would capture the House, even with a map whose gerrymandered lines strongly favored Republicans.”

San Diego Union-Tribune: “Rep Duncan Hunter (R-CA), facing re-election amid a federal prosecution for alleged stealing of $250,000 in campaign funds, was easily fighting off a re-election challenge on Tuesday from a Democrat with Mexican and Palestinian roots who struggled to connect with voters in strongly Republican parts of East County and North County.”

“At nearly 1 a.m., it got more unusual: Nathan McMurray, after earlier conceding defeat, called for a recount.”

Democrats could roll to a 20-seat majority after picking up dozens of seats in cities, suburbs and even rural areas, reports @GrahamDavidA https://t.co/LiiyzuyvMN

“In one of the biggest Democratic victories of the 2018 election, Florida voted overwhelmingly Tuesday to restore voting rights to an estimated 1.5 million former felons, including roughly 500,000 African-Americans,” USA Today reports.

“Elsewhere across the country there were progressive wins for the continued legalization of marijuana, a rejection of the conservative agenda in Oregon and more abortion restrictions passed in red states.”

New York Times: “Several House candidates whose compelling biographies (and slickly produced renderings of them) helped put them on the national radar lost on Tuesday, including Randy Bryce in Wisconsin, Amy McGrath in Kentucky and M.J. Hegar in Texas. Ms. McGrath and Ms. Hegar made it close in traditionally conservative areas, though Democrats had higher hopes for full breakthroughs in recent weeks.”

“The conclusion is certainly not that viral videos are counterproductive; they remain a useful and efficient way to raise money and introduce a candidate to a wider audience. But at times, it seems, the audience was not always the intended constituency.”

Democrats have taken the House. Here’s the first five things they should do — and none of them involve a subpoena. My new column for the @washingtonpost: https://t.co/NMKkwUvfrn

CNN: “Two-thirds of voters say their vote in today’s congressional election is about Donald Trump, according to early exit polls, and more say they’re showing up at the polls to express opposition than support for the President.” “The President’s approval rating is net negative among the nation’s voters, and more say things in the country are on the wrong track than that they are going in the right direction.”

Also interesting: “A big majority of voters, about two-thirds, made their 2018 election decision before the last month, according to preliminary exit poll results. Only one-in-five said they decided in the last month and even fewer said they made up their minds in the last few days or last week.”

My take on the night's results: a big landslide win for Democrats tempered by a racist, structurally immoral electoral system.https://t.co/9SCZLGiC5G

“Two more associates of Roger Stone, the longtime adviser to President Trump, testified recently before a grand jury hearing evidence in the investigation into Russia’s interference in the 2016 presidential election — the latest in a series of witnesses connected to Stone whose testimony has been sought by the special counsel,” the Washington Post reports.

Whatever happens tonight, Trump's death grip on the Republican Party is only likely to tighten. My story on the MAGAfication of the GOP in 2018: https://t.co/k025hSRari