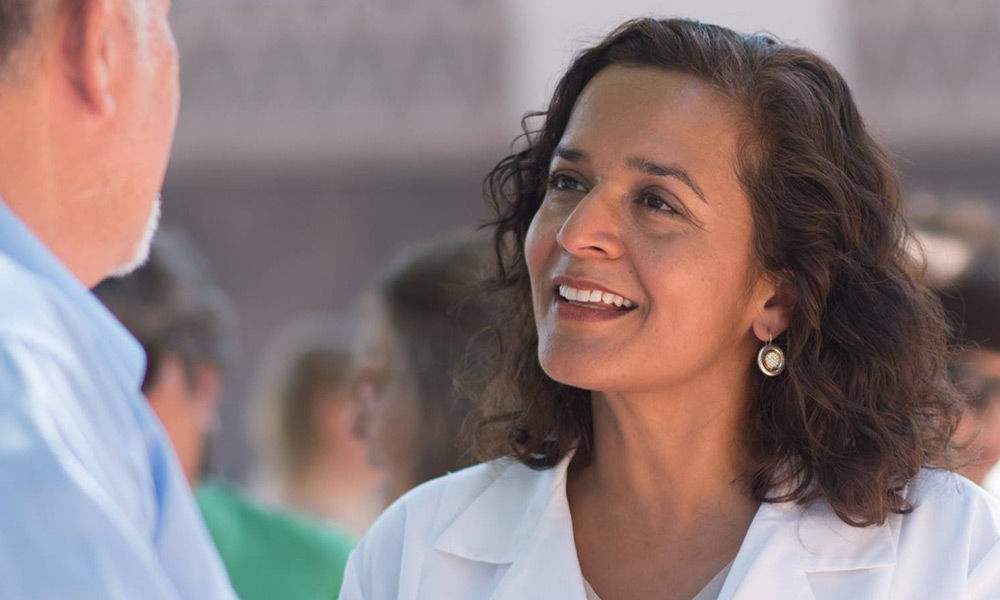 Last week, a poll in the Arizona 8th Congressional District Special Election showed Democratic emergency physician Hiral Tipirneni with a one point lead for the first time,  46-45 over former Republican state Sen. Debbie Lesko.  Since it was the first poll all race that showed it that close, most considered it an outlier.   But now we have a second poll.

The Lake Research Partners poll, commissioned by the Tipirneni campaign, the candidates are tied 44 to 44 among likely voters — and 46 to 46 among people who have already voted early.  The poll finds voters view Tipirneni favorably by 18 points and Lesko unfavorably by 2 points. It also finds Democrats are much more motivated to vote.

Most astonishingly, the poll shows 13 percent of Republican early voters so far have defected for Tipirneni. For context, only 8 percent of Republicans in Alabama crossed over to vote for Democrat Doug Jones in the Senate race last year, and that was enough for him to win.

So while this is an internal poll, it confirms that the first poll was not an outlier.  A victory in this district would be more shocking than Connor Lamb or Doug Jones winning.

I’ve enjoyed the privilege of covering each person in this extraordinary photo. A moment of warmth, civility and respect brought them together. Photo by my friend @PaulMorsePhoto for the Office of George H. W. Bush pic.twitter.com/aVZwrOHQzp

A new Missouri Scout poll finds Sen. Claire McCaskill (D-MO) holding a slight edge over her likely challenger Josh Hawley (R) in the U.S. Senate race, 48% to 44% with another 8% undecided.

Stan Collender: “It’s fairly typical for the House and Senate to miss the April 15 deadline set in federal law for Congress to adopt the budget for the coming year.”

“But what’s not typical is what’s happening now: The GOP-controlled House and Senate Budget Committees are flatly refusing to comply with the law (and fulfill their only real statutory responsibility) by not even trying to do a budget for the fiscal year that starts this October 1.”

“Yes, you read that right. The House and Senate Budget Committees only have one job — to adopt a budget resolution — and this year they are unwilling, incapable or just stomping their feet and refusing to do what the Congressional Budget Act specifically requires of them.”

NBC News: “Barack Obama didn’t pull off one of the greatest political upsets of the century alone. He beat Hillary Clinton in 2008 with a little help from friends he made on the campaign trail two years earlier when he was a senator stumping for Democrats around the country in the midterms.”

“Today, with a potential midterm wave building, the 2020 presidential race is off to a rolling start as a host of potential Democratic candidates look to help themselves by helping others, quietly stepping up their political work to curry favor with key party members ahead of what could be a presidential primary contest with a double digit number of hopefuls competing.”

Salt Lake Tribune: “After 11 hours of political elbowing and shoving at the Utah Republican Convention — held appropriately at a hockey arena — delegates forced Mitt Romney into a primary election against state Rep. Mike Kennedy in the U.S. Senate race.”

“In fact, Kennedy — a doctor and lawyer — finished in first place at the convention with 51 percent of the vote to Romney’s 49 percent. The former GOP presidential nominee fell far short of the 60 percent needed to clinch the nomination outright.”

Politico: “The first presidential contests of 2020 are nearly two years away, but for one Democrat the campaign is already in full swing. John Delaney — a wealthy, little-known congressman from Maryland — has spent more than $1 million on TV in Iowa, hired staffers and opened a campaign office in Des Moines.”

“Since announcing his bid last July, he’s made 110 campaign stops in 48 of Iowa’s 99 counties. He has visited New Hampshire six times, and on Friday made his second trek to South Carolina.”

Martin Longman: “I feel fairly confident that the Democratic electorate in 2020 is not going to nominate a banker from the centrist branch of the party who preaches national unity. But Rep. John Delaney of Maryland is right about one thing. If he is going to have any chance at all, he needs to get in early, boost his name recognition, build his team, and make some friends. That he has already campaigned in dozens of Iowa counties is a sign that he’s serious in a way I never really felt that Bernie Sanders was in 2014 and 2015.”

The White House is nervous that Ronny Jackson — Trump’s pick to run VA — won’t be confirmed by the Senate, @jonathanvswan reports. https://t.co/gGr6DYb1LR

Rep. James Clyburn (D-SC) says this year’s midterm election is the last shot for the current Democratic leadership, Politico reports.  Said Clyburn: “If we’re still in the minority, all of us have got to go.”

Playbook: “Clyburn has been at the leadership table for years. He is now the only member of House Democratic leadership who has voiced what many have said behind-the-scenes: that if Dems can’t win in November it’s time for new leadership. Many Democrats complain privately that even if they take the House, it is time for Nancy Pelosi and her team to step aside and make way for the next generation.”

Hero James Shaw Jr. – A good guy without a gun who stopped a bad guy with a gun. https://t.co/k67ghrU0zb

Sen. Susan Collins (R-ME) slammed former FBI Director James Comey for releasing his memoir during the ongoing Russia probe, saying she worries the book could interfere with the investigations, NBC News reports. Said Collins: “I cannot imagine why an FBI director would seek to essentially cash in on a book when the investigation is very much alive. He should have waited to do his memoir.”

Max Boot says that Kim Jong-un is pulling a fast one on the slow Donald Trump.   “Kim has let it be known that he is willing to discuss denuclearization and a peace treaty to end the Korean War — without insisting on a pullout of U.S. forces. CIA Director Mike Pompeo has journeyed to Pyongyang to meet with Kim. And on Friday Kim announced that he will end nuclear and missile tests and shut down the site where the nuclear tests have been conducted. In light of all this news, a reader writes to ask: “Just wondering if you are going to update your March 8 ‘snooker’ piece.” Yes, I am. Here’s the update: Kim is a more adept con man, and Trump an easier mark, than even I had imagined.  These are not “breakthroughs” signaling peace in our time. These are indications of how skillfully Kim is maneuvering to preserve his nuclear program while relaxing international sanctions and dissipating Trump’s “fire and fury.””

Is the North Korean nuclear issue about to be solved? Not at all, writes @andreilankov: https://t.co/V1gbTXI2h5 pic.twitter.com/BrW6zGcpKg

Joe Scarborough predicts that Trump is one and done.  “It is true that GOP leaders stand silent as President Trump trashes the rule of law, attacks federal judges and declares America’s free press the “enemy of the people.” These lap dogs even remain muzzled as younger Americans are chained to a future of crippling debt. And they shame the memory of the first Republican president — who gave his life ending slavery — by marching alongside a bumbling bigot who labels Hispanics “breeders” and “rapists,” seeks to bar tens of millions of Muslims from entering the country, and defends white supremacy in the ugly aftermath of Charlottesville.  And yet these same morally enfeebled enablers have become muted when asked whether they’ll support their fearless leader’s reelection bid.

“Look, I’m focused on opioids,” muttered Tennessee’s Lamar Alexander, suggesting that a U.S. senator is not mentally adept enough to fight a drug epidemic while also figuring out whether he backs a president in his own party. Alexander is not the only GOP senator to offer up tortured answers to this simple question.”