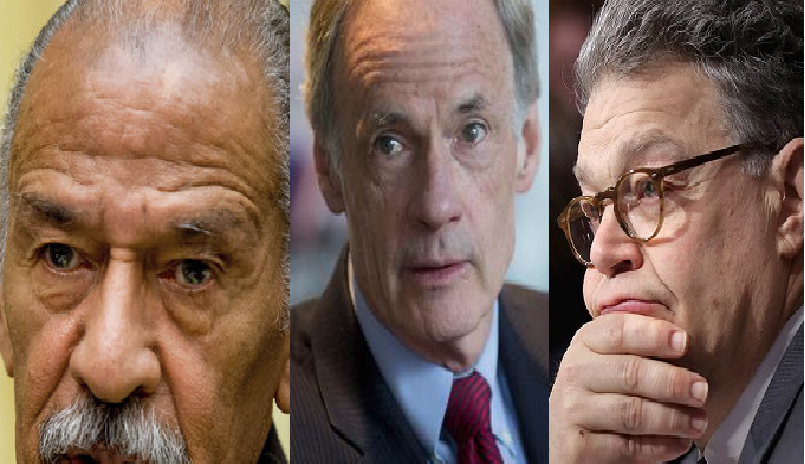 This is my olive branch to the other site.  Markos Moulitsas is something of a godfather to the blogging community on the liberal side, and I know he inspired both me and Jason330.  And as he describes below, Markos had the immediate reaction that Jason330 had to the Franken sexual harassment news (defend first!) and then came around to my opinion (it’s politically and morally better to cut all ties immediately).   You can read that all for yourself below.  And then stay tuned to the olive branch.

Markos Moulitsas of Daily Kos: “I’m not going to lie, this has been a difficult situation for me, and I waged a fierce weeks-long internal debate with myself. But in the end, once I got past my moral disgust (which leads to an easy “resign!”), a deep exploration of the practical politics of the matter inevitably led to a similar conclusion. Franken has to go.

You don’t have to be a math wiz to understand that activating even a slice of those non-voting unmarried women could dramatically reshape our political landscape. And that’s not even considering gains Democrats could potentially make among Republicanmarried (and unmarried women) in the age of Trump.

But here’s the thing: Democrats can’t cleanly make the case that they’re better for women, legislatively, if every Donald Trump and Roy Moore is offset by an Al Franken and John Conyers. By keeping Franken around, it creates that noxious “both sides do it” atmosphere that both demoralizes and demobilizes. It erases what should be a clear, bright line between our party and theirs. You can argue all day about how “different” Franken’s harassment was compared to Donald Trump’s or Roy Moore’s pedophilia. In the end, those distinctions get lost in the noise. They have sexual predators. So do the Democrats. Ergo, there is no difference.

We need a bright line between our parties.”

Alby, who, by the way, has become a good and prolific writer at the other site, countered that if I really mean to call on Franken and Conyers to resign then I should want Delaware Senator Tom Carper to resign too.  I think Alby thinks that this would really stump me, as if I am some sort of ultimate defender of Tom Carper rather than someone who has called on him to retire ahead of the 2018 election for the past five years.    Why should Carper resign?  Because of that story from the late 1970’s that resurfaced in 1996 that Carper had a domestic violence incident with this ex-wife.   I have no idea if the story is true or not, or if Carper admitted to it or not, but in this cultural moment, it will resurface again in the 2018 election and Carper will be forced to explain and defend his assault (actual v. sexual) on his wife.    So Alby is right.

37 comments on “All Must Resign”