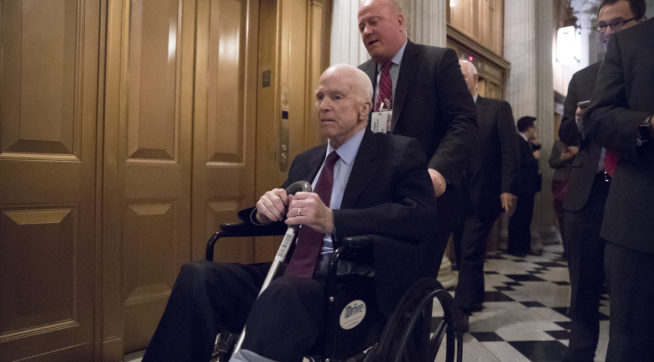 Sen. John McCain (R-AZ) said that he will support the Republican tax plan, The Hill reports.  Said McCain: “After careful thought and consideration, I have decided to support the Senate tax reform bill. I believe this legislation, though far from perfect, would enhance American competitiveness, boost the economy, and provide long overdue tax relief for middle class families.”  The text of the bill has not been released yet, so he has not read it.  From the picture above, he is not long for this world.  And he has decided to trash whatever goodwill he garnered from his No vote on Obamacare repeal with this.  Goodbye Senator McCain.  I don’t think you are going where you think you are going.

Meanwhile, “Congress’ nonpartisan tax analysts have concluded the Senate Republicans’ tax plan would add $1 trillion to the deficit over 10 years, contradicting White House promises the bill would pay for itself and complicating GOP leaders’ efforts to find the support they need to pass the bill through a closely divided Senate,” the Washington Post reports.

Sen. Susan Collins (R-ME) threw a little obstacle in the way when she demanded that Alexander-Murray, the Obamacare Exchange Stabilization bill, be passed and signed by Trump before senators take a final vote on a $1.5 trillion Donor Relief bill that would repeal Obamacare’s individual mandate, The Hill reports.

A Republican plan to automatically trigger tax increases or spending cuts if revenue falls short has been shot down the U.S. Senate’s parliamentarian, the Washington Post reports.

“The tension played out during a tense 62-minute standoff on the Senate floor, as Sens. Bob Corker (R-TN), Jeff Flake (R-AZ), and Sen. Ron Johnson (R-WI) refused to vote with their colleagues until they had assurances that more changes could be made to the bill.”

Axios: “A trigger was the way Republicans were going to get members worried about the deficit to back the tax bill. Now Republicans need to find hundreds of billions of dollars to make deficit hawks happy or the bill might die — and many Republicans don’t like any other ideas to raise taxes.”

7 stats that explain what the Senate Republican tax bill would do https://t.co/8TbmABo2mV

Ezra Klein: “We have grown too afraid of the consequences of impeachment and too complacent about the consequences of leaving an unfit president in office. If the worst happens, and Trump’s presidency results in calamity, we will have no excuse to make, no answer to give. This is an emergency. We should break the glass.”

“Impeachment is not a power we should take lightly; nor is it one we should treat as too explosive to use. There will be presidents who are neither criminals nor mental incompetents but who are wrong for the role, who pose a danger to the country and the world. It is a principle that sounds radical until you say it, at which point it sounds obvious: Being extremely bad at the job of president of the United States should be enough to get you fired.”

We’re all in Kansas now https://t.co/O5GmhAWdzu

David T.S. Jonas on the upside for Democrats if the GOP passes this godforsaken bill:

“The attack ads practically write themselves. If I were the campaign manager of a Democratic candidate running for Congress in 2018, I would be praying this bill passes. It is the kind of sprawling, inelegant transfer of the tax burden from multinational corporations and the idle rich to the middle class that about 80% of voters really, really won’t like. As a result, Democratic challengers can tailor-fit their attacks on Republican opponents depending on how they need to move the electorate. Want to depress Republican voter turnout? Just find a handful of Republican voters willing to go on camera and have them ask, “Congressman, why did you raise my taxes?” Want to mobilize older Americans and those worried about healthcare? Point out that your opponent cut Medicare so that Donald Trump’s kids can inherit billions of dollars tax-free. Want to project an image of personal and fiscal responsibility? Bemoan the trillions added to our debt so that multinational corporations can ship more jobs overseas. The possibilities are endless.

Democrats now have the ultimate pay-for. The Trump tax cuts are deficit-financed to the tune of about $1.8 trillion over ten years, meaning that repeal would give Democrats close to $2 trillion in revenue to construct their own reconciliation package around. A massive infrastructure bill, universal pre-K, or even a strong public option that makes universal healthcare a reality—each of these could be tucked into a repeal bill and passed with 51 votes in the Senate. Best of all, Democrats can pocket the revenue-raisers they like, discard the ones they don’t like (such as the massive tax increases on graduate students), and still put money down towards reducing budget deficits. It may take until 2021 for them to take both Congress and the Presidency, but one day soon Democrats will have a gigantic chunk of change waiting for them to enact big Democratic priorities with.”

There is no economic theory that justifies the tax bill currently moving through the Senate, writes @EricLevitz https://t.co/CHOotD66HX

Sen. Richard Durbin (D-IL) said he is encouraging his colleagues to join him in blocking spending legislation if the legal status of “dreamers” isn’t resolved, the Washington Postreports.

“Durbin has repeatedly said in recent months that Congress needs to resolve the status of dreamers by the end of the year, but he is now the highest-ranking Democratic senator to raise the specter of a government shutdown sparked by an impasse over immigration… Durbin’s position is shared by at least four members of his caucus — Sens. Kamala Harris (D-CA), Elizabeth Warren (D-MA), Cory Booker (D-NJ) and Bernie Sanders (I-VT).”

Is Donald Trump delusional or a serial peddler of disinformation?

Said Pelosi: “He should resign.”  About time.  Now your turn, Chuck Schumer.  Tell Franken where to go.  Speaking of the Minnesota Senator:

Alabama Senate Candidate Roy Moore (R) “co-authored a study course, published in 2011 and recently obtained by ThinkProgress, that instructs students that women should not be permitted to run for elected office.”  “If women do run for office, the course argues, people have a moral obligation not to vote for them. The course is also critical of the women’s suffrage movement, which in 1920 secured some American women the right to vote.”

Joe Scarborough said on Morning Joe that allies of President Trump questioned Trump’s mental state during the 2016 presidential campaign.  Said Scarborough: “People close to him during the campaign told me he has early stages of dementia.”

Mike Allen: “Exhausted by the Trump presidency? Brace yourself: White House officials expect Trump to be even more outrageous and cocksure in coming months.”

“Officials tell us Trump seems more self-assured, more prone to confidently indulging wild conspiracies and fantasies, more quick-triggered to fight than he was during the Wild West of the first 100 days in office.”

“Imagine Trump if he signs a huge tax cut into law, which seems likely, amid soaring stocks and rising economic growth. Imagine if Roy Moore wins in Alabama, which seems likely, too. It surely won’t humble Trump — or hem him in. He’s like the Incredible Hulk, after the media and Mueller made him mad.”

“Former Trump adviser and longtime political troublemaker Roger Stone has been asked repeatedly how he knew, seemingly in advance, that WikiLeaks was going to publish damaging information about Hillary Clinton’s campaign. And he has repeatedly refused to answer, saying he had a ‘go-between’ who did not wish to be named,” ABC News reports.

“On Tuesday, however, Randy Credico, a New York comedian and political activist who hosts his own radio show, tweeted a picture of a congressional subpoena compelling him to appear on Dec. 15 before the House Intelligence Committee… Credico has been identified as the intermediary between Stone and WikiLeaks founder Julian Assange and will face questions from investigators about those relationships.”

Ron Brownstein: “The baby boom is being evicted from the penthouse of American politics. And on the way out, it has decided to trash the place. That’s probably the best way to understand the generational implications of the tax legislation Republicans are driving through Congress.”

“The House and Senate measures shower enormous benefits on households at the top of the economic ladder, a group that by all indications is older and whiter than the population overall. Then it hands the bill for those benefits largely to younger generations, who will pay through more federal debt; less spending on programs that could benefit them; and, eventually, higher taxes.”

Bret Stephens: “If you want to understand the ways in which Donald Trump’s presidency is systematically corrupting the American mind, I have a book recommendation for you. It’s about Vladimir Putin’s Russia.”

“The book is Peter Pomerantsev’s Nothing Is True and Everything Is Possible. It was published in 2014, and it brilliantly tells the story of the (Soviet-born) British author’s sojourn as a producer for Russian TV. As the title suggests, at its heart it’s the tale of the substitution of reality with ‘reality,’ of factual truth with interpretive possibility.”