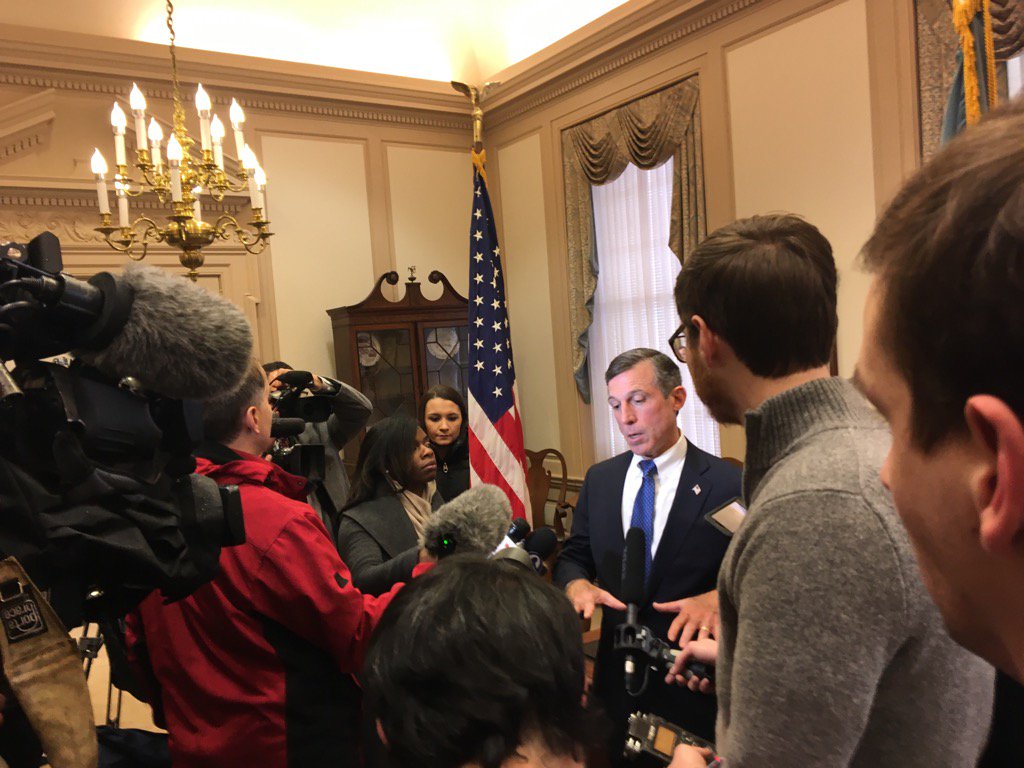 I went to the meeting yesterday morning.  Interesting, but I think we are not going to see much in terms of a more progressive tax plan or budget.  First off, this meeting was really Rep. Stephanie Bolden’s annual meeting of civic associations in her District.  So I think they were surprised that it got opened up to the public.

The following are the two graphics that were provided for the Governor to talk from.  If you want the pdfs, you can get them at the Budget Reset website — Budget Reset and Education Handout.

So. For spending, we are hiring teachers to accommodate the increase of students– there isn’t any real salary growth in the Executive Branch.  Medicaid is definitely increasing due to the numbers who now qualify for it. Medicaid costs are shared by the states and the Feds, so as more people enroll, the state’s costs increase.

On the Revenue side, we are looking at something more interesting.  Bank Taxes have decreased, Business Taxes have decreased, Franchise taxes look as though they are the same as last year or maybe abit more and Income Taxes have increased.  Carney talks about the Business and Income taxes as reflecting growth in the state.  He also notes that reductions in specific taxes like the Bank Tax provide incentives for jobs to grow here — so that the trade-off should be a decrease in a business tax with a much larger increase to the Income Tax.

But that’s not how it looks, right?  He was asked about that specifically and then backed into the idea that the incentives we provide now pretty much help us to “tread water” on new jobs.  Which means that all of the incentives to Astra Zeneca and others to provide work and business that might replace the jobs lost at Boxwood, Avon and other large businesses has just not worked especially well.

He also seemed to say that we wouldn’t want to play with the Income Tax too much because we needed to stay competitive with neighboring states.  Neighboring states who have larger property taxes, I’ll add.

He was specifically asked by a man who said he was from the Union to create a task force to work out how to re-do the Coastal Zone Act to make it easier to have other industries come in to occupy these sites and put people to work.  I’m sympathetic to putting people to work, but I never hear from the people asking for regulatory relief exactly WHAT regulations they need relief from and why.  Right now, “regulatory relief” is a business talking point that is meant to tell you that the Government is in their way but they never provide any specifics as to how.

Carney was also asked about legalizing marijuana as a way to raise revenue.  The gentleman who asked the question came prepared with a bunch of good arguments and statistics.  The room erupted into applause after this too.  Carney made it known that he was a NO on legalizing marijuana and said he wanted to learn from the problems that other states were dealing with first.  And that he didn’t want to be the first in the East to try it.  (Which defeats the revenue issue.)  He also said that while he was touring some treatment centers in Kent or Sussex, he learned that people with opioid addiction came to that either starting with marijuana use OR from improper prescription management.  The Marijuana As A Gateway Drug is pretty well debunked as a general theory — while a few people may be susceptible to some biological process that might make them vulnerable, most people using other drugs are buying their drugs from dealers who sell the other stuff and use it as an opportunity to upsell the harder and more profitable stuff.  In any event, Carney isn’t interested in this even in the face of a giant budget hole.

What are the solutions?  None were provided, but he will provide a revised budget after DEFAC submits their next report in March.