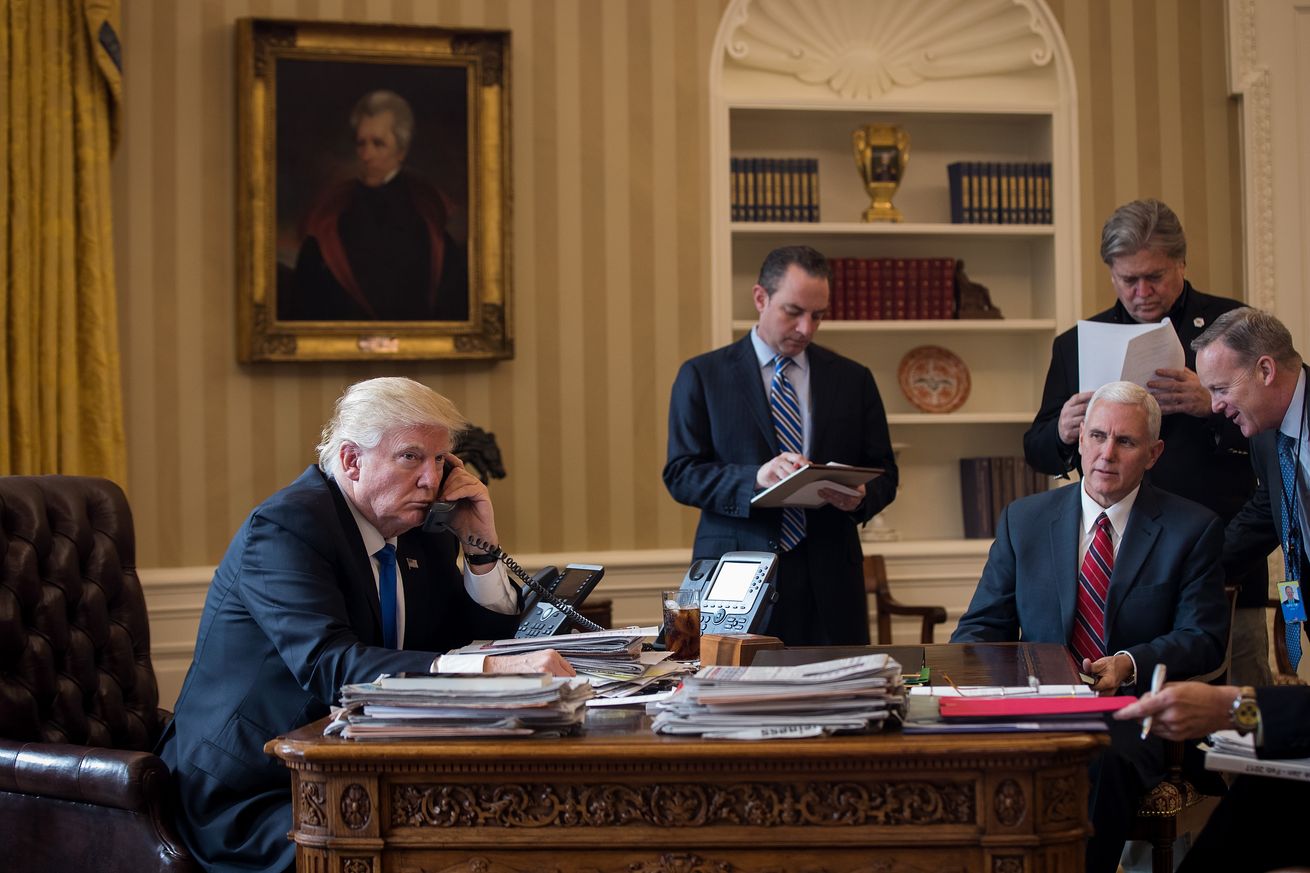 “Acting Attorney General Sally Yates, a holdover from the Obama administration, ordered the Justice Department on Monday not to defend President Trump’s executive order on immigration in court,” the New York Times reports. “Mr. Trump has the authority to fire Ms. Yates, but as the top Senate-confirmed official at the Justice Department, she is the only one authorized to sign foreign surveillance warrants, an essential function at the department.”

Washington Post: “Yates’s view is perhaps unsurprising; she was second-in-command at the Justice Department under President Obama, held over until a new attorney general can be confirmed. Still, her announcement is remarkable for its defiance. It was not immediately clear who would defend the president’s order in the Justice Department’s place.”

Mein Fuhrer Trump fired Yates last night. It sounds like he wrote the following statement himself:

Associated Press: “At least three top national security officials — Defense Secretary Jim Mattis, Homeland Security Secretary John Kelly and Rex Tillerson, who is awaiting confirmation to lead the State Department — have told associates they were not aware of details of directive until around the time Trump signed it. Leading intelligence officials were also left largely in the dark.”

“The blowback underscored Trump’s tenuous relationship with his own national security advisers, many of whom he met for the first time during the transition… Mattis, who stood next to Trump during Friday’s signing ceremony, is said to be particularly incensed… Tillerson has told the president’s political advisers that he was baffled over not being consulted on the substance of the order.”

Boris Johnson: no reason to cancel the Trump visit. The UK held state dinners for Mugabe and Ceausescu, too. https://t.co/SEgtDcsO46 pic.twitter.com/y4rdppqnxc

In his first statement since leaving office, former President Obama said he supported the protests going on around the country over President Trump’s refugee ban, Politico reports.

Said Obama: “Citizens exercising their Constitutional right to assemble, organize and have their voices heard by their elected officials is exactly what we expect to see when American values are at stake.”

Said Trump: “I noticed Chuck Schumer yesterday with fake tears. I’m going to ask him who is his acting coach.”

CNN has the video of Schumer at an emotional press conference.

I believe POTUS' Muslim ban as illegal, unconstitutional, and un-American – watch my interview on @NewDay @CNN from this morning: pic.twitter.com/RUNMjXbukt

New York Times: “In a matter of hours on Saturday, thousands rushed to the nation’s airports, beckoned by tweets. The flash protests in response to Mr. Trump’s immigration ban, which continued to grow in many cities on Sunday, were as organized as they were instantaneous. Dispatched online, the protesters knew where to go, and they knew what to do once they arrived: to command the story by making a scene.”

“Mr. Trump feeds off media attention. Throughout the campaign, the bigger a spectacle he created, the larger he loomed in the public consciousness. What has been remarkable during the last two weekends is how thoroughly Mr. Trump’s own media personage was blotted out by scenes of protesters.”

Listen to our latest cover story, 'How to Build an Autocracy' by @davidfrum here: https://t.co/5YAH2pdEPR pic.twitter.com/Lw95U7DM3C

“Senate Democrats are going to try to bring down Donald Trump’s Supreme Court pick no matter who the president chooses to fill the current vacancy,” Politico reports.

Said Sen. Jeff Merkley (D-OR): “This is a stolen seat. This is the first time a Senate majority has stolen a seat. We will use every lever in our power to stop this.”

The Holocaust Museum resorted to explaining the Holocaust in an apparent rebuke of President Trump https://t.co/e0CKivRhNt pic.twitter.com/tcpwDmZGm1

“Dozens of foreign service officers and other career diplomats stationed around the world are so concerned about President Donald Trump’s new executive order restricting Syrian refugees and other immigrants from entering the United States that they are contemplating taking the rare step of sending a formal objection to senior State Department officials in Washington,” ABC News reports.

“In recent days, drafts of a dissent memo have been circulating among diplomats and associates abroad expressing concern that the new restrictions — which Trump said would help ‘keep America safe’ — are un-American and will actually paralyze efforts to stop terrorist attacks in the U.S.”

Lawfare: “Consider this a major bureaucratic uprising on the part of career foreign service officers against the President on his executive order on refugees.”