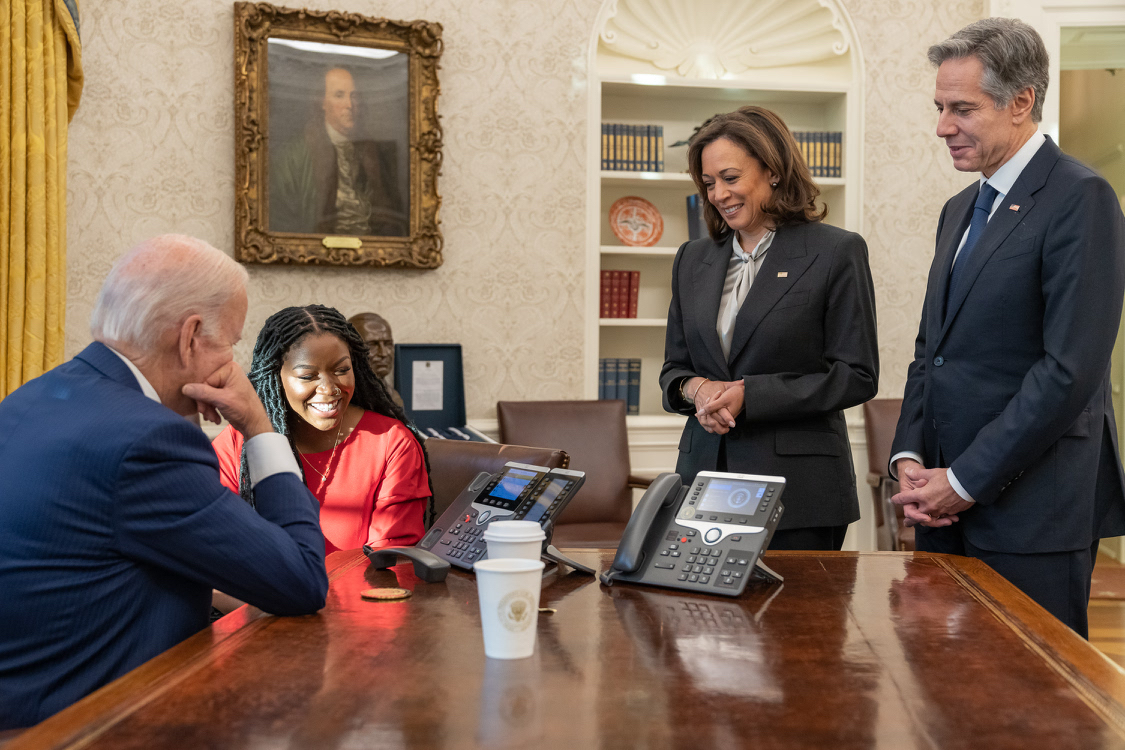 Washington Post: “The clock is ticking on lawmakers, who find themselves on Thursday in a familiar race to address a slew of fast-approaching fiscal deadlines. Their chief task is to adopt a new spending measure before Dec. 16, otherwise Washington is set to run out of money, bringing federal agencies, programs and services to an undesirable halt.”

“The debate so far has proved difficult, and it remains unclear whether the two parties can reach a wide-ranging agreement in a matter of weeks. Without that package, known as an omnibus, Congress also may have no other legislative pathway this year to pursue its remaining policy priorities — including Democrats’ and Republicans’ preferred changes to the tax code.”

Brittney Griner, the American basketball star imprisoned in Russia, was released on Thursday after 10 months of captivity after President Biden agreed to a swap for Viktor Bout, an imprisoned Russian arms dealer known as the “Merchant of Death,” the New York Times reports.

“Her case became an international cause because she was seen as a hostage held by President Vladimir Putin’s government as Russia was subjected to a broad swath of international sanctions in response to its invasion of Ukraine a week after her arrest.”

“Ukrainian officials and lawmakers have in recent months urged the Biden administration and members of Congress to provide the Ukrainian military with cluster munition warheads, weapons that are banned by more than 100 countries but that Russia continues to use to devastating effect inside Ukraine,” CNN  reports.

“The Ukrainian request for the cluster munitions is one of the most controversial requests the Ukrainians have made to the US since the war began in February.”

A prominent adherent of the QAnon conspiracy theories posed for photos with Donald Trump at his Mar-a-Lago resort Tuesday night after speaking at an event hosted at the club, ABC News reports.

Said Kudlow: “I want to clear the air. I want to get this out of here. I don’t understand what our former boss is doing. I love the guy, but I do not understand Kanye West, hanging out with White nationalists, hanging out with anti-Semitic people, talking about ending the Constitution or postponing the Constitution. I don’t get it. I don’t know why he’s saying it. And if he says it, why hasn’t he given, you know, apologized for it or corrected the record or something? Because he’s losing support left and right. I hear it everywhere. Help me.”

“According to three sources with knowledge of the matter, this multi-pronged — and so far unsuccessful — effort to get Trump to denounce West follows the ex-president’s ‘Nazi’ Mar-a-Lago dinner last month with the anti-Semitism-spewing, Hitler-lauding West and fascist youth leader Nick Fuentes.”

Politico: “The losses have raised new questions about Trump’s political strength and capped off what those close to him concede was a nightmarish month, one that has left the former president badly wounded just as he is embarking on a new campaign.”

Washington Post: “Trump’s seclusion within the ornate walls of his club and a series of controversies — from the dinner with antisemites Ye and Nick Fuentes to a social media post suggesting the “termination” of the Constitution — have left him increasingly isolated within his party as he tries to mount a political comeback.”

“Florida Gov. Ron DeSantis’s inauguration celebration is expected to be spread out over two days — and will give up close access to donors willing to contribute between $50,000 and $1 million,” Politico reports.

“The inauguration will give DeSantis an opportunity to demonstrate his fundraising prowess as well as his status as the lead Republican alternative to former President Donald Trump, who has already declared that he’s running for president.”

“DeSantis (R) — should he run for the GOP’s 2024 presidential nomination — has an opening to attack former President Trump’s Covid response from the right,” Axios reports. “DeSantis’ hands-off approach to the pandemic — reopening schools for in-person learning earlier than other states, fighting vaccine mandates and refusing to reimpose restrictions during case spikes — was a key to developing his political brand.”

Rep. Bennie Thompson (D-MS) said the House select committee investigating the Jan. 6, 2021 attack on the Capitol is planning to release its final report on Dec. 21, The Hill reports.

Thompson said the release of the report will be accompanied by a “formal presentation,” but the details are still up in the air.

“The House is set to give final approval Thursday to legislation protecting same-sex marriages in federal law, a monumental step in a decadeslong battle for nationwide recognition of such unions that reflects a stunning turnaround in societal attitudes,” the AP reports.

FTX founder Sam Bankman-Fried tweeted that he would testify before the House Financial Services Committee after he finished “learning and reviewing” the events that led to the spectacular collapse of his cryptocurrency exchange, Reuters reports.

“Congressional Democrats are intensifying their critical focus on the Supreme Court in the wake of accusations of leaked decisions and improper outside influence, calling for new ethics rules to be imposed on the justices,” the New York Times reports.

“House Democrats plan to convene a hearing on the issue on Thursday. Senate Democrats say they are also considering taking a closer look at the court after disclosures of a concerted campaign by evangelical Christians to develop deep contacts among some conservative justices as they weighed major rulings on religious rights, abortion and contraception.”

Sen. Tim Kaine (D-VA) told The Bulwark that Senate Democrats could pick up the slack where his party’s investigations may fall off in the House.  Said Kaine: “We may do some of our own work here to tell a more accurate story—that would depend on what the investigation is.”

He added: “But if the House wants to go from a legislative body into a body that’s just trying to get headlines on weird investigations, they may feel like at the end of the day they can pat themselves on the back because they got on a cable news TV show. But I don’t think they’re going to be impressing their voters.”

“More than 7 in 10 voters want President Joe Biden to honor a commitment he made last year and release the final trove of JFK assassination records on Dec. 15, according to a poll released Tuesday in coordination with a research group that sued the administration to force more document disclosure,” NBC News reports.

“About 16,000 of the most closely guarded government secrets into the assassination nearly 60 years ago still remain hidden — including 44 records that would shed light on a covert Cuba-related CIA program that involved Lee Harvey Oswald less than four months before he shot President John F. Kennedy.”

“A federal judge in Manhattan dismissed bribery and corruption charges against former Lt. Gov. Brian Benjamin of New York on Monday, saying prosecutors had failed to demonstrate an explicit quid pro quo in what they had asserted was a scheme to funnel $50,000 in state money to a developer in exchange for campaign contributions,” the New York Times reports.

“The Department of Homeland Security announced Monday that the Real ID deadline would be extended another two years, delaying implementation until May 7, 2025. The law was previously set to come into effect on May 3,” USA Today reports.

“The Real ID law was passed by Congress in 2005 and is meant to establish minimum security standards for state-issued forms of identification like driver’s licenses.”

NBC News: “The theft of taxpayer funds by the Chengdu-based hacking group known as APT41 is the first instance of pandemic fraud tied to foreign, state-sponsored cybercriminals that the U.S. government has acknowledged publicly, but may just be the tip of the iceberg.”

“Incoming Israeli Prime Minister Benjamin Netanyahu has signed a coalition agreement with Religious Zionism party leader Bezalel Smotrich that will give the far-right politician unprecedented authority over the policy on Israeli settlements in the occupied West Bank and relations with the Palestinians,” Axios reports.

“Smotrich, a radical right-wing settler known for his Jewish supremacist rhetoric, supports the annexation of the West Bank and the expansion of settlements. He has also called for increasing the number of evictions and demolitions of Palestinian houses in the area of the West Bank that is not controlled by the Palestinian Authority, known as Area C.”

Germany on Monday walked back its promise to swiftly raise defense spending to at least 2 percent of its economic output — breaching the key commitment made days after Russia’s invasion of Ukraine to become a more serious military force,” Politico reports.

“The US has proposed selling Taiwan as many as 100 of its most advanced Patriot air-defense missiles along with radar and support equipment in a deal valued at $882 million,” Bloomberg reports.

Japanese Prime Minister Fumio Kishida has ordered a sharp defense spending hike that could see his long-pacifist country’s defense budget balloon to near the levels spent by Russia, Bloomberg reports.

Wall Street Journal: “[Saudi Arabia and China] are expected to sign some 20 initial agreements worth more than $29 billion total before attending a large gathering of Gulf and Arab leaders on Friday.”