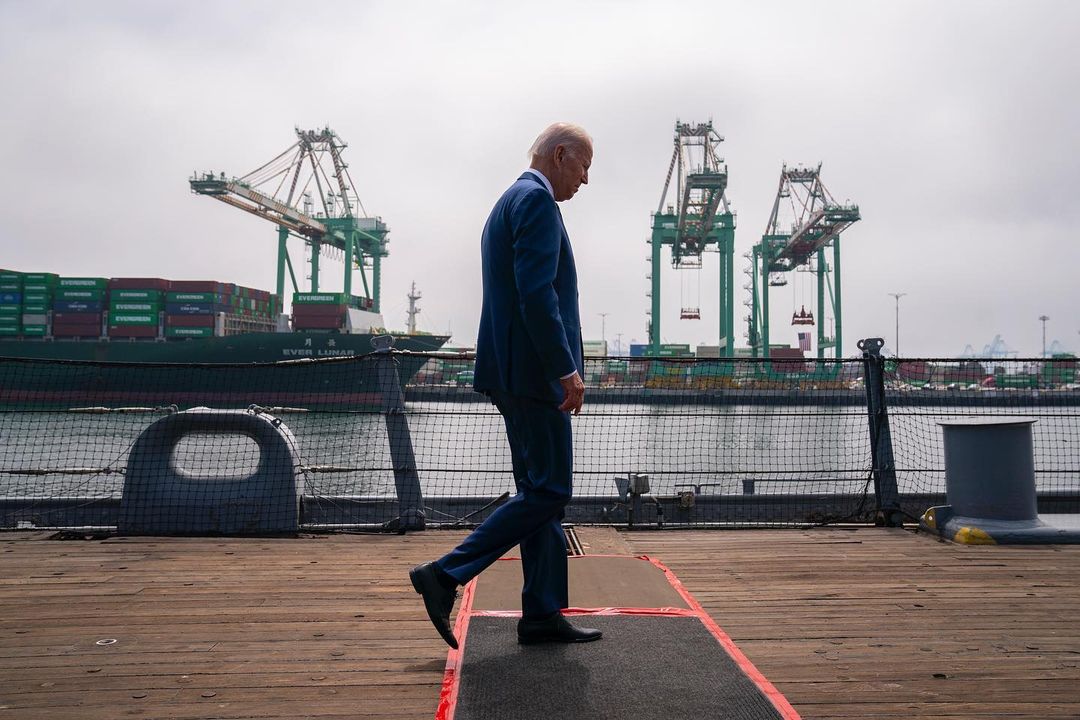 “President Biden on Wednesday will call on Congress to suspend the federal gas and diesel taxes for the next three months, the latest effort by the White House to provide relief to Americans struggling with record-high gasoline prices,” The Hill reports.

Wall Street Journal: “A suspension of the 18.4 cents a gallon federal gasoline tax would require congressional approval, so a move by Mr. Biden to throw his support behind the effort would be largely symbolic. Lawmakers of both parties have expressed resistance to suspending the tax, a move that would likely need bipartisan support to become law.“

New York Times: “Even if all of the benefits were passed on to consumers, the owner of a Ford-150 that gets 20 miles to the gallon driving a thousand miles per month would save about $9 if the federal gas tax were suspended — the cost, these days, of a decent ham sandwich.”

Jason Furman: “Whatever you thought of the merits of a gas tax holiday in February it is a worse idea now. Refineries are even more constrained now so supply is nearly fully inelastic. Most of the 18.4 cent reduction would be pocketed by industry–with maybe a few cents passed on to consumers.”

“In a pointed back and forth, the head of Chevron complained Tuesday that President Joe Biden has vilified energy firms at a time when gasoline prices are at near record levels,” the AP reports. Wrote Chevron CEO Michael Wirth: “Your Administration has largely sought to criticize, and at times vilify, our industry. These actions are not beneficial to meeting the challenges we face and are not what the American people deserve.”

Responded Biden: “I didn’t know they’d get their feelings hurt that quickly.”

Ambrose Evans-Pritchard: “The New York Federal Reserve’s internal model is flashing an 80% risk that the US economy will enter a sustained contraction in the second half of this year, much sooner than presumed just weeks ago. The chances of a ‘soft landing’ have dropped to 10%. If so, you can stop worrying about an inflationary spiral.”

“The institution’s ‘dynamic stochastic general equilibrium’ model points to an outright fall in GDP of 0.6% this year and a further fall of 0.5% next year. It likens the current picture to the 1990 recession under George Bush senior, triggered by the First Gulf War.”

“Supply constraints, exacerbated by Russia’s war in Ukraine this year, account for about half of the surge in US inflation, with demand currently making up a third of the increase, according to new research from the Federal Reserve Bank of San Francisco,” Bloomberg reports.

At this point, I believe the entire Uvalde police force should be prosecuted for accessories to murder.

“The Senate on Tuesday cleared the first hurdle to passing a bipartisan measure aimed at keeping firearms out of the hands of dangerous people, agreeing to take up a compromise bill whose enactment would break a yearslong stalemate over federal legislation to address gun violence,” the New York Times reports.

“While the bill falls short of the sweeping gun control measures Democrats have long demanded, its approval would amount to the most significant action in decades to overhaul the nation’s gun laws. The 64-to-34 vote came just hours after Republicans and Democrats released the text of the legislation, and after days of feverish negotiations to hammer out its details.”

Punchbowl News: “This is the first significant gun control bill to have a real chance of becoming law in nearly three decades. And it signals the extraordinary pressure Congress is under to respond to the horrific wave of gun violence plaguing the nation.”

A new Politico/Morning Consult poll finds a substantial partisan divide among those who tuned into the January 6 Committee hearings: 56% of Democratic voters watched, as did 32% of independents and 25% of Republicans.

“The more we learn from the January 6 committee, the more it becomes obvious that the Senate’s inability to convict Trump in February 2021 was a failure of historical proportions.”— Political scientist Alex Garlick, on Twitter.

“The House committee investigating the Jan. 6, 2021, attack on the U.S. Capitol will have at least one more hearing than the six originally planned, and committee members are considering holding even more hearings beyond that,” Time reports. Said a committee aide: “We continue to receive information via our tip line. This is an ongoing investigation. We continue to take on new evidence every day.”

Ivanka Trump, the elder daughter of former President Donald Trump, told a documentary film crew in the middle of December 2020 that her father should “continue to fight until every legal remedy is exhausted” because people were questioning “the sanctity of our elections,” the New York Times reports.

The video “was striking for how it shows Ms. Trump using a different tone in describing her father’s efforts to overturn the outcome than she did in the portion of her deposition to the House committee that has been made public so far.”

The documentary video footage subpoenaed by the January 6 Committee includes “11 hours of footage of interviews with members of the Trump family,” CBS News reports.

Sen. Ron Johnson (R-WI) insisted that “there’s no conspiracy here” when CNN pressed him over his staff’s newly-revealed attempt to help Donald Trump overturn the 2020 election.

Text messages show Johnson had an “alternate slate of electors” to personally deliver to Vice President Mike Pence, but the senator claimed that “some staff intern said the vice president needs this, or whatever. I wasn’t involved.”

It’s worth remembering that Johnson had already acknowledged that Biden won the election in mid-December 2020.

New York Times: “To some Democrats in Congress, he has become something of a hero for resisting Donald Trump’s pressure campaign to overturn the 2020 election at a time when American democracy seemed to teeter on the brink. To Mr. Trump and his political base, Mr. Pence is a weakling who gave away the presidency. And to a swath of anti-Trump voters in both parties, he is merely someone who finally did the right thing by standing up to his former boss — years too late, after willingly defending or ignoring some of Mr. Trump’s earlier excesses.”

“The whipsaw of images creates an uncertain foundation for a potential presidential campaign, for which Mr. Pence has been laying the groundwork. Yet the former vice president is continuing with his travels around the country in advance of the 2024 primaries, as he navigates his fraught positioning.”

Trump “never stopped fighting every day to deliver on the promises that we had made to the American people,” Pence gushed during a Fox News interview on Monday.

Sure, the Capitol insurrection was “a tragic day,” but “I am not going to allow the Democrats to use that tragic day to distract attention from their failed agenda,” Pence declared. No sir!

“The irony is that Pence was arguably the primary enabler of Trump… He was the mainstream traditional conservative Republican who would go to donors and not just defend Trump and his policies, but with a straight face insist that Donald J. Trump was a good man.” — GOP strategist Rob Stutzman, quoted by the New York Times.

“When the United States and European Union moved to curtail purchases of Russian fossil fuels this year, they hoped it would help make the Russian invasion of Ukraine so economically painful for Moscow that President Vladimir Putin would be forced to abandon it,” the New York Times reports.

“China and India, the world’s most populous countries, have swooped in to buy roughly the same volume of Russian oil that would have gone to the West. Oil prices are so high that Russia is making even more money now from sales than it did before the war began four months ago. And its once-flailing currency has surged in value against the dollar.”

David Ignatius: “A quiet partnership of the world’s biggest technology companies, U.S. and NATO intelligence agencies, and Ukraine’s own nimble army of hackers has pulled off one of the surprises of the war with Russia, largely foiling the Kremlin’s brazen internet hacking operations.”

Former President Donald Trump told Punchbowl News that there’s “not even a question” that House Minority Leader Kevin McCarthy (R-CA) should have put Republicans on the January 6 Committee.  Said Trump: “The Republicans don’t have a voice. They don’t even have anything to say.”

“Gavin Newsom keeps picking exactly the kinds of fights that presidential candidates like to pick,” the New York Times reports.

“And though Newsom has declared that he has ‘subzero interest’ in running for president — and aides insist that he is deadly earnest about that — he appears to be not only positioning himself as a point man for blue states but also laying the groundwork for a future White House run.”

Said David Axelrod: “If the president were not to run, it’s hard to imagine that Newsom would not be sorely tempted to enter the race. … Newsom is young and politically muscular, which may be just what the market will be seeking post-Biden.”

Associated Press: “Ravnsborg, a first-term Republican who only recently announced he wouldn’t seek reelection, showed little emotion as senators convicted him first of committing a crime that caused someone’s death. They then delivered another guilty verdict on a malfeasance charge that alleged he misled investigators and misused his office.

Arizona Speaker Rusty Bowers (R), who testified so forcefully against efforts by Donald Trump to overturn the 2020 presidential election before the January 6 Committee, said he would nonetheless vote for Trump again if he were the Republican nominee in 2024, the AP reports.

Said Bowers: “If he is the nominee, if he was up against Biden, I’d vote for him again. Simply because what he did the first time, before Covid, was so good for the county. In my view it was great.”

Edward Luce: “Pity Merrick Garland. Whichever path America’s attorney-general takes — to prosecute Donald Trump or not — entails great risk. Putting the former president on trial would hasten the country’s drift towards political violence. Letting him walk away would make another coup attempt more likely. Garland is damned if he does and damned if he doesn’t. Either route could endanger U.S. democracy.”

“The evidence amassed by the U.S. House of Representatives’ January 6 committee is making it much harder to turn a blind eye. Garland’s quandary is acute. The standard of proof for a criminal conviction is considerably higher than lay observers of the January 6 protests might assume. A botched prosecution would make Trump stronger and even help re-elect him. When you strike at a king — even a former one — you must kill him.”

“Andrew Gillum (D), the once-rising Florida Democratic star who narrowly lost his 2018 gubernatorial race against Ron DeSantis, has told associates that he expects to be indicted in federal court as early as today for alleged fraud tied to his campaign,” NBC News reports.

“The expected indictment would mark a new low for Gillum, a married father of three who withdrew from public life as a political leader and a paid CNN commentator after a March 2020 sex scandal involving a suspected male overdose victim in a South Beach hotel.”

“Emmanuel Macron has met leaders of opposition groups including the far right’s Marine Le Pen to sound out his chances of negotiating a parliamentary majority,” The Guardian reports.  “The French president, whose centre-right alliance fell 44 seats short of controlling the Assemblée Nationale, was said to be exploring his ‘room for manoeuvre’ after losing control of the lower house in Sunday’s legislative elections.”