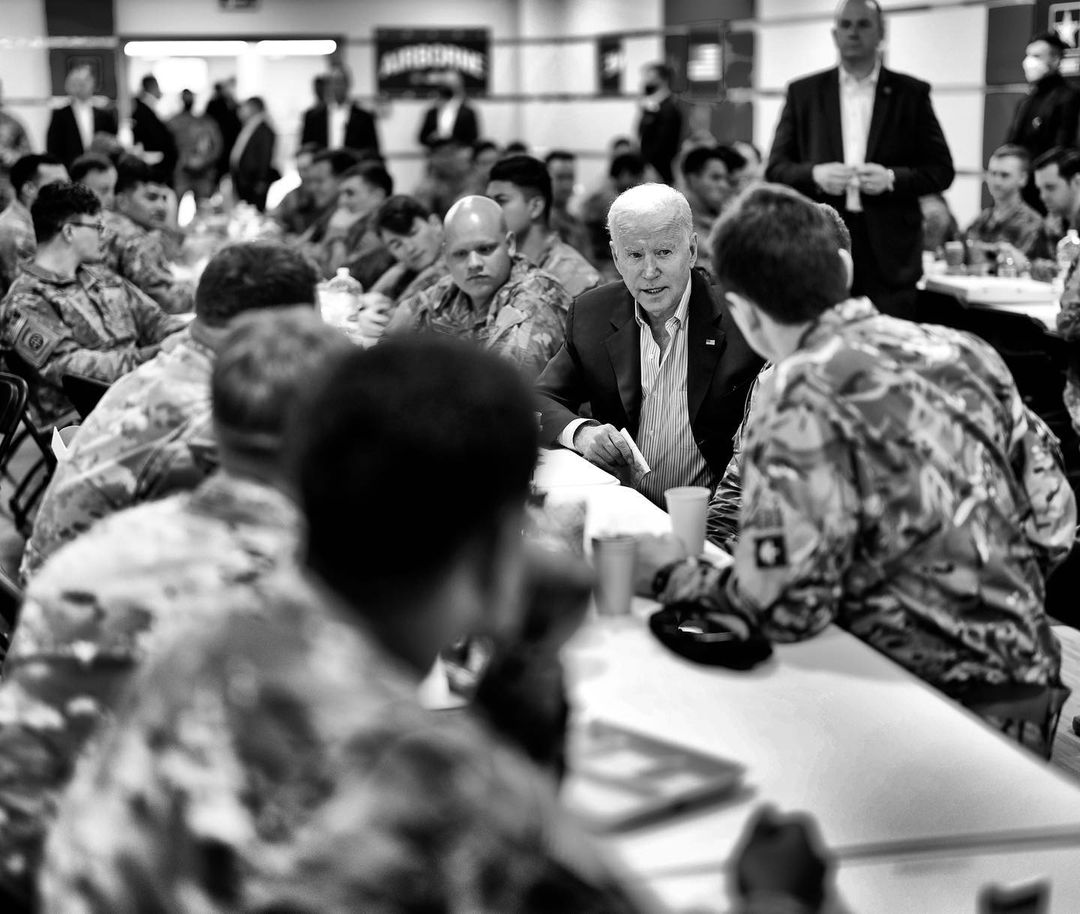 A new Quinnipiac poll finds President Joe Biden’s approval rate is a negative 36% to 55% with 10% not offering an opinion.

“Democrats across the political spectrum are panicking about a recent NBC News poll showing President Biden’s approval rating at the lowest levels yet — 40%,” Axios reports.

“Moderate and progressive Democrats, particularly in the House, are fearful of an electoral tsunami this November.”

“Party strategists said Democrats need to string together a series of wins by the end of July or early August to make any potential gains in the November midterms.”

Chris Cillizza: “The math is simple then. Americans care far more about inflationary costs in their own lives than they do about Russia’s invasion of Ukraine. And on that issue, they don’t think Biden is doing a very good job.”

“At the end of October, Republicans held an 11-percentage-point advantage in voter enthusiasm. By January, that margin had ticked up to 14 points. Now, according to the most recent NBC News poll, it has swelled to 17 — a massive advantage that has foreshadowed devastating losses in Congress in prior years,” Politico reports.

“The latest poll would be bad enough for Democrats. But it’s the trend line that is especially grim, seemingly impervious to a series of events — including President Joe Biden’s State of the Union address and the nomination of a judge to the Supreme Court — that Democrats had predicted might improve their candidates’ prospects in the fall.”

Gallup: “Nearly half of Americans, 47%, say they worry a great deal about the availability and affordability of energy. This is up from 37% a year ago and is more than double the percentage in 2020, when energy concern was at its low point.”

“More than a month after Russia invaded Ukraine, inflation eclipses the war in Ukraine as the nation’s most urgent issue. Americans say inflation (30%) is the most urgent issue facing the country today, followed by Russia’s invasion of Ukraine (14%), and then immigration (9%),” according to a new Quinnipiac poll.

FiveThirtyEight: “No matter which way you slice it, Democrats have gained blue seats from the mapmaking process, making the House playing field between the two parties more balanced than it has been in decades.”

“As the maps stand on March 30 at 5 p.m. Eastern, 175 congressional districts have a FiveThirtyEight partisan lean of D+5 or bluer, 181 have a partisan lean of R+5 or redder and 33 are in the ‘highly competitive’ category between D+5 and R+5.”

“With the midterm election cycle fast approaching, Republicans in the key states of Florida and Ohio have made critical progress in their push to add to their dominance on congressional maps by carving new districts that would be easier for G.O.P. candidates to win,” the New York Times reports.

Politico: “Pence is releasing a 19-page policy platform on Thursday aimed at casting himself as a figure of the future and moving the country ‘forward to ensure that the best days for the greatest nation on earth are yet to come.’”

“It’s the kind of statement most prospective presidents would make, but in this case it’s also an implicit swipe at Trump, who is focused on relitigating the 2020 election as he weighs a comeback bid.”

“The former vice president has spent the last year laying the groundwork for a 2024 campaign — launching a nonprofit policy group, huddling with major donors and stumping for midterm candidates.”

A recent polling memo obtained by Jewish Insider suggests that Rep. Madison Cawthorn (R-NC) may be “in danger” as he prepares to go up against more than a half-dozen Republican primary challengers this May in North Carolina’s newly drawn 11th Congressional District.

“Sen. Thom Tillis (R-NC) is throwing his weight behind a primary opponent to freshman Rep. Madison Cawthorn (R-NC) — an extraordinary broadside against a fellow Republican from his home state, as internal frustration with the controversial MAGA firebrand reaches a boiling point,” CNN reports.

“And Tillis may not be alone. Other GOP lawmakers who are at their wits’ end with Cawthorn are considering endorsing one of his primary foes.”

Media Matters regularly tracks the posts with the most interactions from top Facebook news and political pages. For several years, this this has been dominated by right-leaning websites and commentators. But here’s today top Facebook posts about politics:

As Max Boot notes, it definitely feels like right-wing posts aren’t doing as well on Facebook ever since Russia blocked the social network. Just a coincidence?

CNN: “Trump’s relatively lonely mission to defeat Kemp reveals how the former President’s priorities can often be out of step with those of Republicans who are actually on the ballot in 2022. The series of upcoming GOP primaries in May may be a mixed bag for Trump. And his overall record in the 2022 midterms will depend on an untested premise: Do Republican primary voters remain aligned with Trump?”

“None of Trump’s preferred candidates in three of the highest-profile statewide races in Georgia — Herschel Walker for US Senate, Burt Jones for lieutenant governor and Jody Hice for secretary of state — have endorsed Perdue. And in their remarks at a Trump rally in Georgia on Saturday, none of them mentioned the gubernatorial primary.”

“A super political action committee affiliated with Speaker Nancy Pelosi has reserved almost $102 million in advertising time in an attempt to defend Democrats’ narrow five-seat majority in the House of Representatives,”  Bloomberg reports.  “That amount is twice what the House Majority PAC had reserved two years ago.”

“The House Democrats’ main political action committee is spending nearly $102 million to reserve advertising spots in 50 media markets, from Bangor, Maine, to San Diego, Calif., a battlefield that is considerably larger and more expensive than it was in the past two congressional elections,” the New York Times reports.  “The breadth of the congressional map reveals the scope of Democrats’ worries about holding seats in midterm elections. Areas once considered safe, like South Texas, greater Pittsburgh and Seattle will see Democratic advertising.”

“But Democrats will be playing some offense, too, especially in California, where redistricting has opened up Republican targets.”

“Democrats are eyeing Chicago as a city of interest to host the party’s 2024 convention and the mayor, the governor and a key U.S. senator are coordinating on a plan to make it happen,” NBC News reports.

“While the discussions are early and informal, some national Democrats already see the Midwestern city as an appealing contender, in part for its heartland geography — touching key swing states like Wisconsin and Michigan — but also because of the comfort that would come with holding a marquee political event in a tried-and-true blue state.”

GEORGIA 13TH CD. Rep. David Scott has received an endorsement from Stacey Abrams, the once and future Democratic nominee for governor, for his potentially competitive May primary.

MISSOURI 1ST CD. State Sen. Steve Roberts announced Monday evening that he would challenge freshman Rep. Cori Bush, who is one of the most prominent progressives in Congress, in the August Democratic primary for this safely blue seat in St. Louis. Roberts said of the incumbent, “She made a comment that she wanted to defund the Pentagon. The NGA (National Geospatial-Intelligence Agency) is a multi-million dollar project that’s in my Senate seat, in the 1st Congressional [District], those folks don’t have a voice.” His campaign also faulted Bush for casting a vote from the left against the Biden administration’s infrastructure package.

Roberts himself was accused of sexual assault by two different women in 2015 and 2017, though he was never charged. Bush’s team highlighted the allegations after he announced his bid, saying, “Such men do not belong in public service, much less representing the incredible people of St. Louis in Congress.”

PENNSYLVANIA 17TH CD. Navy veteran Chris Deluzio has earned an endorsement from the Allegheny-Fayette Central Labor Council, which the Pittsburgh Tribune-Review describes as the “largest labor coalition in the region,” for the May Democratic primary for this competitive open seat.

FLORIDA 7TH CD. We hadn’t previously heard Seminole County Commissioner Lee Constantine mentioned as a possible Republican candidate for this open seat, but St. Pete Polls’ new survey for Florida Politics finds him beating defense consultant Cory Mills 23-12 in a hypothetical primary; when Constantine is excluded, Mills edges out state Rep. Anthony Sabatini 13-12. The firm explains that it surveyed voters within the boundaries of the 7th District under the plan passed by the legislature but vetoed by Gov. Ron DeSantis.

MICHIGAN 13TH CD. Former Detroit police chief Ralph Godbee announced Tuesday that he was dropping out of the August Democratic primary for this open seat. His statement added, “Godbee says he hopes others in the race will also consider putting the need to have Black representation above their own ambitions,” though he didn’t identify who he thought would be the strongest African American contender.

OHIO 1ST CD. Republican Rep. Steve Chabot is seeking re-election in a Cincinnati-based seat that transformed from a 51-48 Trump constituency to one that Biden would have carried 53-45. The one Democrat to file was Cincinnati City Councilman Greg Landsman, while Chabot’s only intra-party foe, Jenn Giroux, still doesn’t appear to have set up a fundraising committee.

OHIO 7TH CD. Rep. Bob Gibbs faces serious Republican primary opposition from Max Miller, a former Trump aide who had been running for the old 16th District, in a seat in the Canton area and Akron suburbs that doesn’t look much like the incumbent’s existing seat. That’s because a mere 9% of the residents of the new 7th District are already Gibbs’ constituents, while 65% reside within the old 16th. Four other Republicans and three Democrats are campaigning for a seat Trump would have carried 54-45.

Miller, who hails from a wealthy family, earned Trump’s endorsement last year when he challenged Rep. Anthony Gonzalez, who voted for impeachment and later decided not to seek a third term. Gibbs, though, has been an ardent MAGA ally, and Trump has yet to say if his endorsement applies to this new race. Last year, Politico reported allegations that Miller physically attacked his then-girlfriend, White House Press Secretary Stephanie Grisham, in 2020, something that Miller quickly denied.

OHIO 9TH CD. Democratic Rep. Marcy Kaptur, who has served in the House longer than any woman in history, is running for a 21st term in a seat in the Toledo area that would have supported Trump 51-48, which is a massive shift from Biden’s 59-40 victory in her current district. Four Republicans are running, and the two most notable appear to be state Sen. Theresa Gavarone and state Rep. Craig Riedel.

OHIO 10TH CD. Redistricting only made small changes to Republican Rep. Mike Turner’s 10th District in the Dayton region, and it remains to be seen if any of his four Democratic foes can put up a serious fight in what remains a 51-47 Trump constituency.

OHIO 11TH CD. Rep. Shontel Brown faces a Democratic primary rematch against former state Sen. Nina Turner, whom she defeated in last year’s special election in a 50-45 upset. No other Democrats are running in this Cleveland-based seat, which would have favored Biden 78-21.

OHIO 13TH CD. State Rep. Emilia Sykes, who stepped down last year as Democratic leader, has the primary to herself in a seat in the southern suburbs of Akron and Cleveland that would have backed Biden 51-48. Seven Republicans are competing here, and Donald Trump has thrown his support behind attorney Madison Gesiotto Gilbert, a former Women for Trump co-chair. The field also includes attorney Shay Hawkins, who lost a tight 2020 race for the state House.

OHIO 15TH CD. Republican Rep. Mike Carey, who was elected in a special election last year, faces a well-established Democratic foe in a Columbus-area constituency where redistricting slid Trump’s margin of victory from 56-42 down to 53-46. Franklin County Recorder Danny O’Connor lost two close 2018 races against Republican Troy Balderson in the old 12th District, and he’d originally planned to seek a third bout there. However, O’Connor filed to face Carey instead after the recorder’s Franklin County base was excised from the 12th, which is now safely red turf at 65-34 Trump.