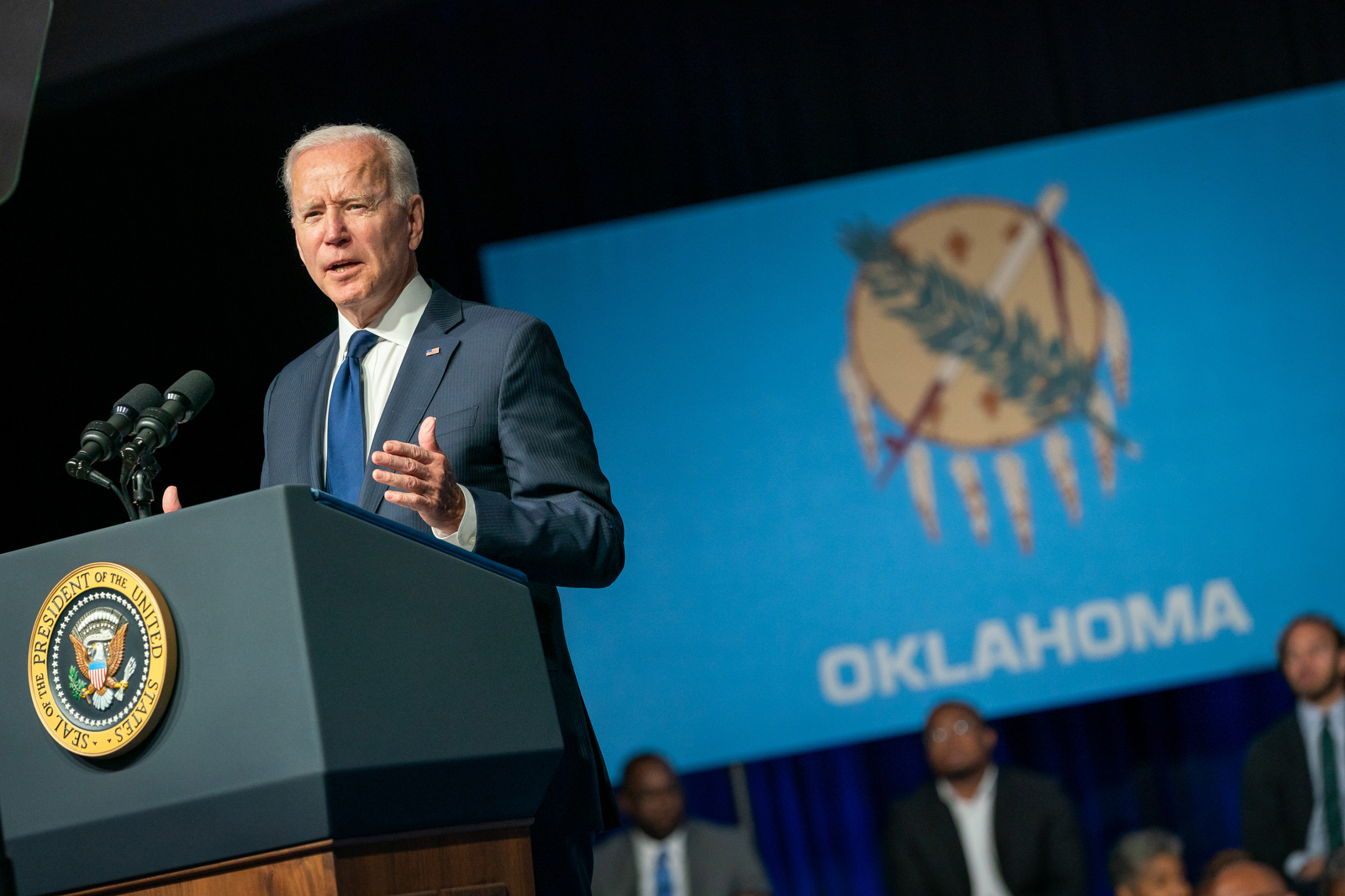 We now have polling data to suggest the lack of legislative movement from Congressional Democrats is costing them enthusiasm from the base. There’s no reason to think Democrats can’t revive any lost excitement by ramping things up, but if your theory of the 2022 midterms relies on a happy and energetic base, these numbers should serve as a reminder that each passing day carries a cost.

A new Economist/YouGov poll among those who voted for Donald Trump shows Vladimir Putin with a 19% approval rating, while President Joe Biden is approved by just 9%.

Politico: “These key suburban populations are mostly white but increasingly diverse, highly educated and relatively affluent. They aren’t scared by immigration; they support it in their own communities—especially with highly skilled immigrants, attracted to work at businesses lured to these suburbs, in many cases, by business-minded Republican politicians. They are repelled by white-grievance politics and culture-war clashes, and concerned about the rise of violent right-wing anti-government plots, like the Jan. 6 insurrection and the thwarted plan to kidnap and execute Michigan Gov. Gretchen Whitmer.”

“They used to think of themselves as Republicans, but nowadays the GOP seems disconnected from the things they care about; it talks less about affordable child care or student debt than banning transgender student athletes or making it harder to vote. It’s the inverse of what President Ronald Reagan said in Macomb County all those years ago: They didn’t leave the Republican Party; the Republican Party left them.”

Stephen Collinson: “The attempt to reconfigure the often disastrous historical record of the Trump presidency comes as the former President eyes a political comeback ahead of a new round of political rallies this summer teeing up 2022 primaries. And it takes place as much of the Republican Party is engaged in a crusade built on the former President’s lies about election fraud to make it harder for many Americans to vote and easier for GOP officials to interfere in free and fair elections.”

“Since the truth is too painful for Republicans and is detrimental to their future political prospects, an alternative narrative must be constructed.”

Georgia Secretary of State Brad Raffensperger (R) “made public the names of nearly 102,000 people who are at risk of having their Georgia voter registrations canceled, a warning before they lose their ability to vote next month,” the Atlanta Journal-Constitution reports.

“Fewer voter registrations are being canceled this year than in 2017, when 534,000 were eliminated from Georgia’s voter rolls during the largest removal of registrations in U.S. history.”

Beto O’Rourke told People he is getting ready for yet another long drive across Texas as part of a voter turnout effort in upcoming elections: “One way or the other, I’m in for the distance for Texas.” He added: “That might be as a candidate.”

First Read: “If you want to see how Donald Trump remains the driving force in Republican politics, just look at the activity from GOP politicians who are up for re-election or running in Republican primaries next year.”

“Eric Greitens, who’s running in a crowded field of candidates for Missouri’s open Senate seat, traveled to Arizona to observe that so-called audit of the 2020 presidential results there.”

“Another way to look at all of it: When a party no longer offers a new party platform or new public-policy ideas, the way for its politicians to distinguish themselves is through symbols, gestures, performance art and — above all — loyalty to the former president.”

SOUTH CAROLINA 7TH CD — Despite forming what he called an exploratory committee in January, state Rep. William Bailey announced this week that he would not challenge Rep. Tom Rice in next year’s Republican primary and would instead seek re-election. Bailey explained his decision by saying that “we clearly have a number of strong conservatives that most likely will jump into the race and challenge Rice,” who enraged Republicans when he voted to impeach Donald Trump in January.

Two notable candidates are in fact running, Horry County School Board chair Ken Richardson and former Myrtle Beach Mayor Mark McBride, while several others are still considering. South Carolina requires a runoff if no candidate takes a majority in the primary.

KWWL’s Ron Steele also notes that, were Mathis to run, it could set up a race between two former TV news personalities. Mathis began her career as a news anchor alongside Steele at KWWL in 1980, then later worked at KCRG, both of which are in Cedar Rapids, before retiring from broadcasting in 2007. Hinson also worked at KCRG for a decade as a reporter prior to her election to the state House in 2017.

TEXAS ATTORNEY GENERAL ––Republican Eva Guzman filed paperwork to enter next year’s primary for state attorney on Friday, which was the same day that her resignation from the Texas Supreme Court took effect. Guzman didn’t announce that she would take on incumbent Ken Paxton, though her consultant said, “She looks forward to putting her experience and know-how to work in a new role. The campaign will have a formal announcement soon.”

Paxton already faces a high-profile primary challenge from Land Commissioner George P. Bush, who is the son of Jeb Bush. Guzman almost certainly doesn’t have the name recognition of either of her foes, but she also lacks their liabilities: Paxton has been under indictment since 2015 for securities fraud and is reportedly under federal investigation over a completely separate scandal, while Bush’s attempts to renovate the Alamo have destroyed his relationship with the party’s nativist base. A primary runoff would take place if no one earns a majority of the vote in the first round.

TEXAS 21ST CD — Businessman Matt McCall, who lost the 2018 GOP primary to Rep. Chip Roy 53-47 for what was then the open 21st District, sounds eager for a rematch: “I have asked Trump for his endorsement to run against Chip Roy,” he recently told the National Review. “If Trump endorses, I will run, and we will kick Chip Roy’s ass.”

Roy’s sin is his refusal to endorse the Big Lie, something that naturally earned him opprobrium from Trump, who half-threatened in a press release last month that Roy “has not done a great job, and will probably be successfully primaried in his own district.” Trump’s outburst came in the context of his endorsement of New York Rep. Elise Stefanik for the House GOP leadership post formerly held by Liz Cheney, a race Roy lost to Stefanik by a 134-46 margin.

But some old familiar battle lines are re-emerging. The deep-pocketed Club for Growth, which was bitterly hostile to Trump during the 2016 presidential primary but later became a vocal ally, endorsed Roy for re-election on Monday, the same day that the National Review piece came out. While it might have made peace with Trump, the Club is a true believer when it comes to Roy: It’s spent $7.7 million on his behalf over the last two election cycles, including an extraordinary $6.3 million in 2020 alone.

NEW YORKK 21ST CD — Democratic attorney Matt Putorti has launched a challenge to Republican Rep. Elise Stefanik, whose high profile as a vocal Trump defender makes her both a monster fundraiser and a major target for progressive donors. Stefanik’s standing as a money magnet is only likely to grow thanks to her recent elevation to the House GOP’s third-ranking post following Liz Cheney’s ouster, but the much bigger question is what Democrats in the state legislature choose to do with her sprawling rural district that voted for Trump 54-44 last year.

It’s too early to speculate on specifics, but while Democrats could try to target Stefanik by making her district bluer, they could very well go the opposite direction and make other GOP-held seats more competitive while making Stefanik’s less so. The answer also partly hinges on whether Democrats choose to bypass the state’s new bipartisan redistricting commission, which in turn depends on whether a new amendment to the state constitution that among other things would make it easier to override the commission’s maps passes at the ballot box this fall.

MISSOURI 4TH CD — Former state Sen. Ed Emery announced a bid for Missouri’s newly open 4th Congressional District on Friday, making him the first notable Republican to join the race. There’s little chance he’ll be the last, though, as many other GOP pols are also eyeing the race for this deeply conservative seat in west-central Missouri that Rep. Vicky Hartzler is giving up to run for Senate.