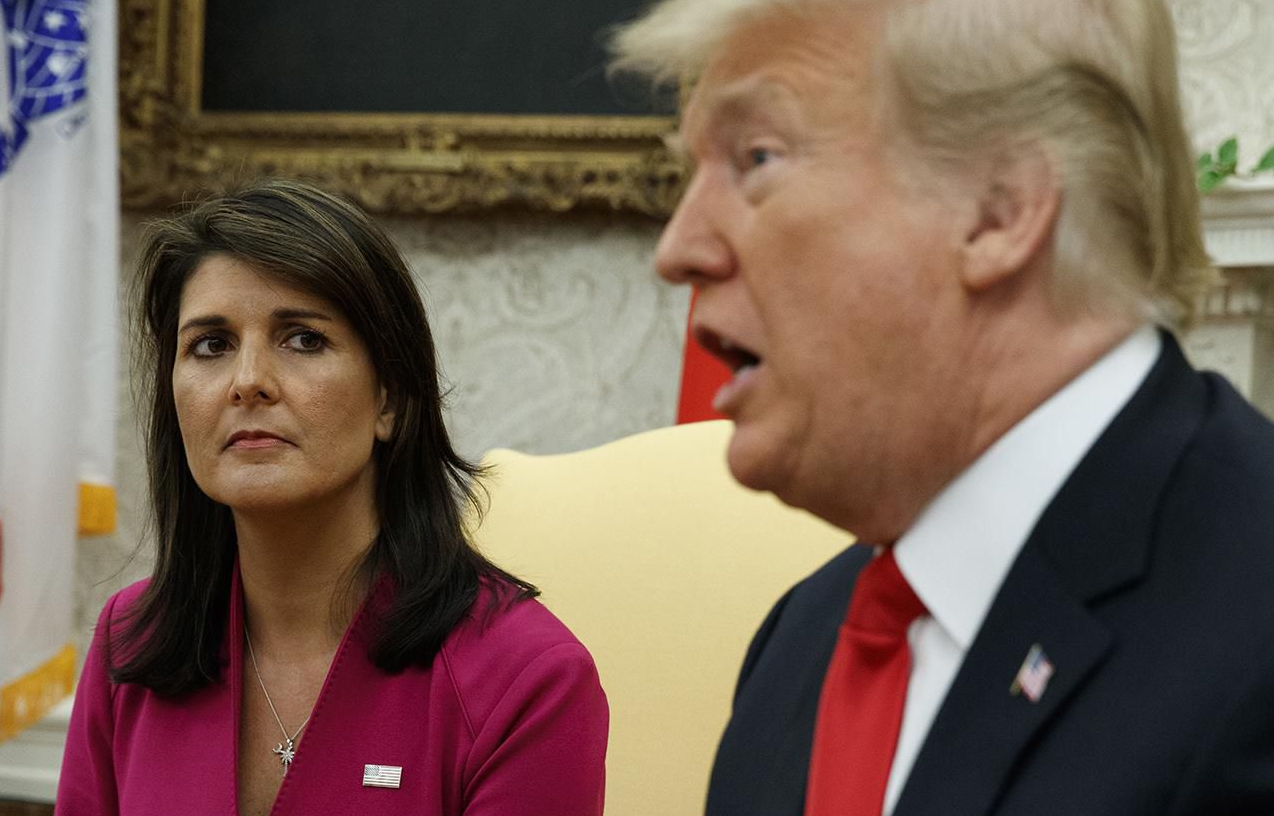 You recall that Nikki Haley publicly broke with Donald Trump in an interview last week. Well she has of course received some Trumpian backlash, and being the unprincipled power mad coward that she and most Republicans is and are, is now complaining in a Wall Street Journal op-ed that the media is trying to divide Republicans:

“If the media gets its way, the GOP will dissolve into endless warfare, ensuring extreme liberal government for years to come. Instead, Republicans need to be honest about what worked and what didn’t over the past four years.”

Jonathan Martin: “This reads as media-bashing but it’s actually damage control… and everybody who works in and covers politics will see it as such.”

Well, that was not good enough to redeem her in the eyes of the Trump God. Trump holds grudges. If you criticize him just once, you are an enemy for life who must be destroyed. So Nikki Haley tried to get a meeting with former President Donald Trump yesterday but he turned her down, Politico reports.

I love it. All these Republicans simply destroy themselves in devotion to Trump and then he stomps on them, ending their political careers, integrity and credibility for all time. Goodbye Nikki Haley. We hardly knew ye.

“There is no doubt that Trump is a potent political figure. Yet, his draw isn’t transferable to other Republicans when he’s not on the ballot, and he failed to get above 47 percent of the vote in two national elections against lackluster opponents.”

FLORIDA U.S. SENATOR — Ivanka Trump told Sen. Marco Rubio (R-FL) last month that she would not mount a primary challenge to his reelection bid in 2022, the New York Times reports.

“The discussion of whether Ms. Trump would seek the Senate seat in the battleground state came as her sister-in-law, Lara Trump, has let it be known that she was thinking of running for the U.S. Senate from her native state of North Carolina. But people briefed on the discussions said that Lara Trump is also unlikely to run.”

BIDEN PAC — Wall Street Journal: “The new group “Building Back Together” will be a 501(c)(4) nonprofit, which would allow it to operate without disclosing its donors. The administration officials said the organizers haven’t made decisions about the group’s budget and funding, including whether to voluntarily disclose donors.”

“Mr. Biden’s advisers hope to use the outside group to promote his $1.9 trillion Covid-19 relief package to the public and his broader first-term agenda.”

TRUMP V. MCCONNELL II: Washington Post: “Trump’s attacks on McConnell came as he plotted a broader return to the political arena. He spent Tuesday at his Florida resort with son Donald Trump Jr., former campaign aide Brad Parscale and others, and has spoken with advisers about setting up a fundraising infrastructure and database system outside the Republican Party’s.”

New York Times on McConnell’s thinking in condemning Trump: “The strategy appeared twofold: Don’t stoke a full-on revolt by Trump supporters the party needs by voting to convict, but demonstrate to anti-Trump Republicans — particularly big donors — that he recognized Mr. Trump’s failings and is beginning to steer the party in another direction.”

“But it did not exactly produce the desired result. Instead, it has drawn Mr. McConnell into a vicious feud with the former president… And it has left some Republicans bewildered over Mr. McConnell’s strategy and others taking a harder line, saying the leader whose focus was always the next election had hurt the party’s 2022 prospects.”

“The miscalculation has left Mr. McConnell in an unusual place — on the defensive, with Mr. Trump pressing for his ouster, and no easy way to extricate himself from the political bind.”

TRUMP WILL NEVER WIN AGAIN: Karl Rove: “Mr. Trump may not be fully aware of shifting currents among congressional Republicans. More members now admit privately that Mr. Trump had no coattails in last fall’s election. Especially in the suburbs, some Republicans and many GOP-leaning independents refused to take his lawn signs or support him. That’s why so many Republican congressional candidates ran ahead of the former president.”

“Mr. Trump crowed Tuesday that he “received the most votes of any sitting President in history.” Then again, Joe Biden received more votes than any candidate in history—and seven million more votes than Mr. Trump.”

“Despite possessing all the powers of incumbency and leading a united GOP, Mr. Trump lost the presidency. If he returned for another White House contest, leading a divided party at war with itself and out of power, he’d be wiped out.”

Rep. David Valadao (R-CA) will face an attempt to censure him at the California Republican convention this weekend for his vote to impeach Donald Trump, the Los Angeles Times reports.

Valadao was one of 10 GOP members of the House of Representatives who voted last month to send the articles of impeachment that blamed Trump for inciting the Jan. 6 Capitol insurrection to the U.S. Senate.

TRUMP V. MCCONNELLL III: “House Minority Whip Steve Scalise (R-LA) made the pilgrimage to Mar-a-Lago on Tuesday to meet with the King of the GOP while fundraising in the area,” Politico reports.

“The trip by the No. 2 House Republican comes weeks after Minority Leader Kevin McCarthy’s sit-down with Donald Trump there last month, and it shows Scalise’s loyalty to the departed president is unshaken. Unlike McCarthy, who called for Trump’s censure after Jan. 6 then moved to patch things up, Scalise, a longtime Trump supporter, never endorsed a formal rebuke of the ex-president.”

Politico: “Following Trump’s call for Republicans to move on from McConnell, Politico on Wednesday reached out to all 16 Republican senators running for reelection in 2022 to ask if they supported the Kentuckian as majority leader. Only two responded.”

“McConnell has many talents, there is no doubt about it, but if he is setting this thing up as a way to expunge Trump from the Republican Party, that is a failing proposition.” — Sen. Ron Johnson (R-WI), in an interview with the New York Times.

BYE BYE IOWA CAUCUSES: Politico: “For years, Iowa and New Hampshire have successfully defended their one-two position from states eager to jump ahead. But the combination of Iowa’s botched 2020 caucus and increasing diversity in the Democratic Party’s ranks has made the whiteness of Iowa and New Hampshire all the more conspicuous, putting the two states on their heels and throwing the 2024 calendar into turmoil.”

TRUMP V. MCCONNELL IV: Politico: “Trump’s scathing attack on Senate Minority Leader Mitch McConnell Tuesday exposed rifts that could dash the GOP’s hopes of retaking the Senate in 2022 if they are allowed to fester. Some in McConnell’s orbit already blame Trump for losing the majority in Georgia last month. Now, the GOP leader has to hold together a fractured conference and guide Senate candidates through difficult primaries while holding onto seats in states Trump lost last year.”

“With McConnell castigating Trump over the Jan. 6 Capitol riot and Trump firing back in personal terms, Senate Republicans have reacted by trying to defuse the situation — a sign of recognition that they need Trump loyalists and more traditional Republican voters to stick together for future success.”

Sen. Lisa Murkowski (R-AK) told KTOO that the Republican Party has to decide whether it is the party of one man — former President Donald Trump — or of principles.

Said Murkowski: “The Republican Party, in my view, was a pretty good party before Donald Trump and I believe we can be a good party after Donald Trump. Right now, I think we’re still trying to figure out who we are.”

WISCONSIN U.S. SENATOR — Alex Lasry (D), a senior executive of the Milwaukee Bucks, announced that he is running for Sen. Ron Johnson’s (R-WI) Senate seat in the 2022 midterms.  Lasry is also the son of the basketball team’s co-owner, Marc Lasry. He enters the contest with an endorsement from Milwaukee County Executive David Crowley, who leads the most populous county in the state.

Lasry, who previously served as an Obama White House aide, said that he would “invest” in his campaign, but that he would also focus on raising money from small donors as well.

Lasry, though, attracted some unfavorable press coverage weeks before he entered the race after the 33-year-old received a shot of the coronavirus vaccine at a senior living center. Lasry tweeted in response, “My wife got a call from her uncle that works in a facility that had extra doses that were going to go to waste if not used right away,” and added that he believed it was necessary to protect his pregnant spouse.

Lasry joins Outagamie County Executive Tom Nelson, who launched his campaign back in October, in the primary. The Badger State will be one of the top Democratic targets next year and a few other potential candidates are also publicly considering entering the nomination fight, including Lt. Gov. Mandela Barnes, state Treasurer Sarah Godlewski, and nonprofit head Steven Olikara.

The Milwaukee Journal-Sentinel adds that both state Sen. Chris Larson, who lost a very close race against Crowley for Milwaukee County executive last year, and Randy Bryce, who was the party’s 2018 nominee for the 1st Congressional District, are “weighing their options,” though neither of them appears to have said anything publicly yet.

PENNSYLVANIA U.S. SENATOR / GOVERNOR — Montgomery County Commissioner Joe Gale, a Trump die-hard who was censured last year by his fellow commissioners for calling Black Live Matters “a radical left-wing hate group,” announced a campaign for governor on Tuesday. Gale, however, seems to be more interested in running for governor of the Pennsylvania Republican Party, since he declared that his first priority would be to “hold bad Republicans accountable not just by naming names, but by supporting primary challenges against those who undermine a common-sense conservative agenda.”

Gale previously had not ruled out a bid for Republican Sen. Pat Toomey’s open seat, but his brother, attorney Sean Gale, said on Tuesday that he would run for Senate instead. The siblings previously ran together for spots on the Montgomery board in 2019, but Sean Gale failed to make it out of the primary while Joe secured re-election only because one of its three slots is always reserved for the minority party. Joe Gale also tried to run for lieutenant governor in 2018 but was booted off the ballot for being under the required minimum age of 30.

Democratic state Rep. Malcolm Kenyatta, who’d reportedly been considering a bid for Senate, confirmed his interest on Tuesday, saying, “It’s certainly something I’m thinking about,” though he did not specify a timetable for making a decision.

Republican businessman Jeff Bartos, who was the GOP’s nominee for lieutenant governor in 2018, has filed paperwork with the FEC to run for the U.S. Senate. He also just stepped down as board chair of a new nonprofit founded last year to help small businesses during the pandemic. Bartos previously promised an announcement would come in mid-March.

“Timken was widely expected to make a run for Portman’s seat. Prior to launching her campaign, she resigned from her role at the Ohio Republican Party and hired a handful of Portman’s former campaign aides, most notably Corry Bliss, who managed the senator’s successful 2016 reelection bid.”

Democratic Rep. Joyce Beatty, who’d reportedly been considering a bid for Ohio’s open Senate seat, announced on Tuesday that she would not join the race.