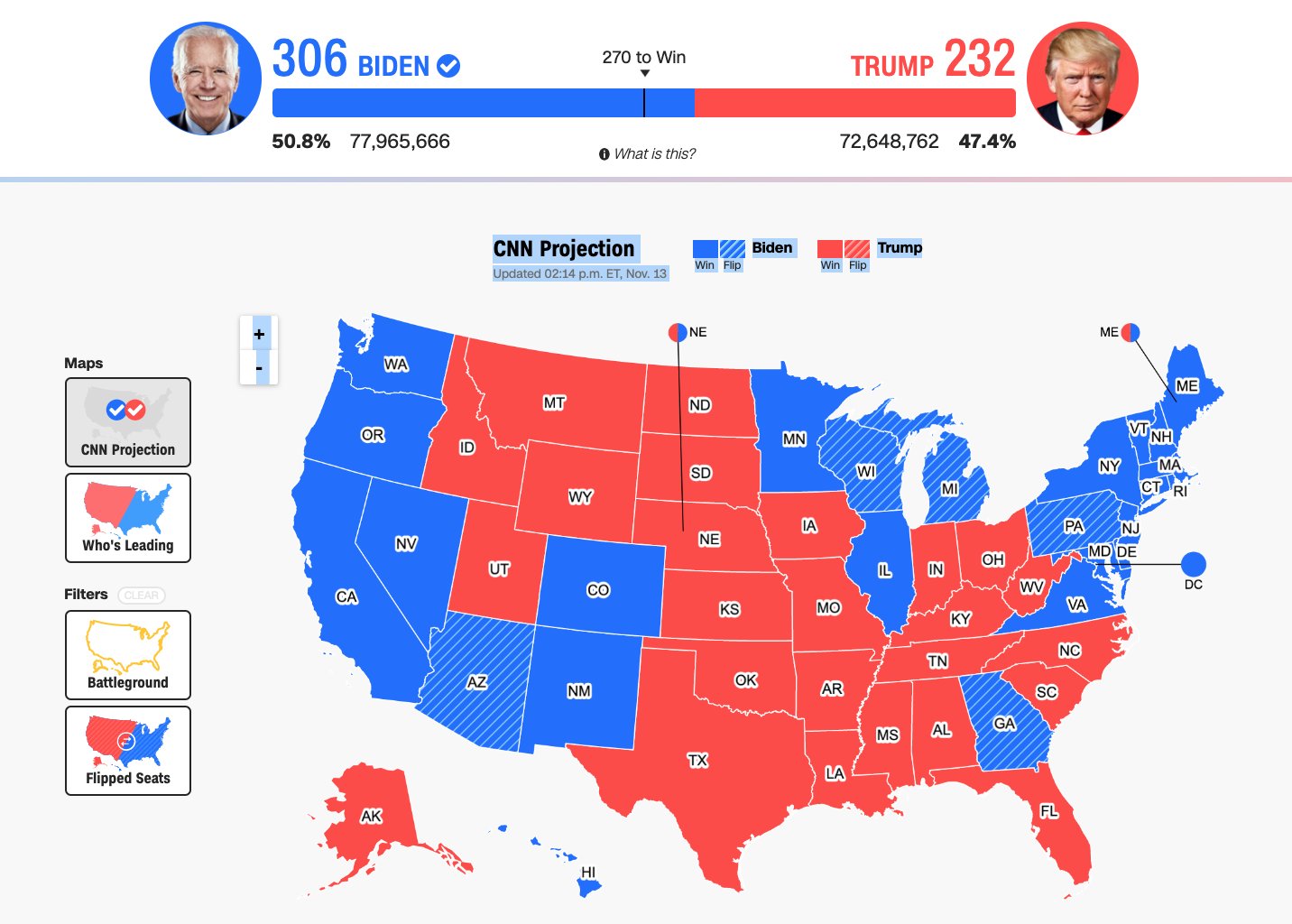 Yesterday, all the networks made their final calls in the presidential race. Arizona and Georgia were called for Joe Biden and North Carolina was called for Donald Trump. The 2020 electoral map is now complete, as shown above.

The Arizona Mirror notes a recount is highly unlikely: “Arizona law sets specific criteria that must be met for election recounts, setting a deliberately high standard that makes it nearly impossible to trigger. For races with more than 25,000 ballots — like the presidential contest — the candidates have to be separated by just 200 or fewer votes. Among the almost 3.4 million ballots cast this year, President-elect Joe Biden has a lead of more than 14,000 votes in Arizona.”

“Pennsylvania Secretary of State Kathy Boockvar said on Friday that based on unofficial returns, she will not order a recount or recanvass of ballots cast in the 2020 election, including in the presidential race,” Axios reports.

“The Republican National Committee said Friday it is funding more than 600 staffers in the state with an investment of at least $20 million ahead of the Jan. 5 runoffs for the seats held by GOP Sens. Kelly Loeffler and David Perdue,” the AP reports.

“The GOP’s investment follows on the party’s massive ground game and data operation in the 2020 presidential race, which fought a large Democratic operation. The party said it organized more than 2.6 million volunteers and had more than 3,000 paid field staffers across key battleground states. In Georgia alone, the RNC says it knocked on more than 3 million doors, made more than 8 million phone calls and registered at least 16,000 voters in the leadup to the presidential election.”

“The nationalizing of elections means whenever any elected Democrat goes out and says something that’s unpopular, unless the rest of the party very forcefully pushes back every Democrat will face an electoral penalty.”

Wall Street Journal: “From 1980 through 2016, 19 of the nation’s more than 3,000 counties voted for the eventual president in every election. Only one of them, Washington state’s Clallam County, backed President-elect Joe Biden last week.”

Charlie Cook: “In my judgment, there was a blue wave building, a pretty big one, then something happened, like a fish getting spooked before taking a bite out of a lure. Too many of the most experienced political operatives in both parties could see it coming. My guess is that while a majority, albeit a small one, wanted to unseat Trump, they got skittish about giving Democrats unified control. Was the electorate willing to put Biden in the driver’s seat, but not give him the full tank of gas and a credit card that a Democrat-controlled Congress would provide?”

“Did the label of “socialist” finally give enough swing voters cause for hesitation? What about charges that Democrats were going to push Medicare-for-all, or pack the Court? What about questions of exactly what would be in a Green New Deal and what would it do to jobs during a fragile economy? Was there a fear that Democrats would or could not keep law and order, given the ‘Defund the Police’ movement?”

“Interviews with nearly three dozen lawmakers, aides and consultants reveal a growing acknowledgment that the party’s campaign arm made several key strategic errors: it underestimated Donald Trump’s popularity, relied too much on polls and failed to heed the warnings of its most vulnerable members,” Politico reports.

“A dozen races remain uncalled, and Democrats caution they won’t have all the answers for months. But many in the party are warning that the biggest priority for the Democratic Congressional Campaign Committee must be overhauling its message. They say it needs to craft a proactive campaign that counters GOP attacks on everything from Medicare for All to fracking — if they have any hopes of keeping their majority in 2022.”

Politico: “Tensions inside the Democratic party are boiling over and spilling out into public view. The latest shots came from Rep. Alexandria Ocasio-Cortez (D-NY), who responded to a report that fellow New York Rep. Hakeem Jeffries asked other top Dems on a private leadership call: ‘Do we want to govern or do we want to be internet celebrities?’”

Ocasio-Cortez responded on Twitter: “Pretty astounding that some Dems don’t believe it’s possible to govern, be politically popular, and command formidable bully pulpits at the same time, but it actually explains a lot about how we got here. We don’t have to choose between these things! We can do better and win!”

WPLG-TV has found evidence to suggest three candidates in three Florida Senate district races were shill candidates whose presence in the races were meant to syphon votes from Democratic candidates.

“Comparisons of the no-party candidates’ public campaign records show similarities and connections that suggest they are all linked by funding from the same dark money donors, and part of an elaborate scheme to upset voting patterns.”

A new Politico/Morning Consult poll finds 70% of Republicans now say they don’t believe the 2020 election was free and fair, a stark rise from the 35 percent of GOP voters who held similar beliefs before the election.

Axios: ” If millions of citizens finish the year believing — without proof or even evidence — that the rightful leader of the nation has been deposed in a coup, the U.S. could face long-term instability and a deepening crisis of legitimacy.”

“With more work on the horizon, three Democrats with knowledge of the former state house minority leader’s aspirations tell the Daily Beast that they expect her to run for governor in 2022.”

President Trump told some of his advisers that if President-elect Joe Biden is officially certified as the winner of the 2020 race, he could announce his plan to run for the White House in 2024 shortly after, the New York Times reports.