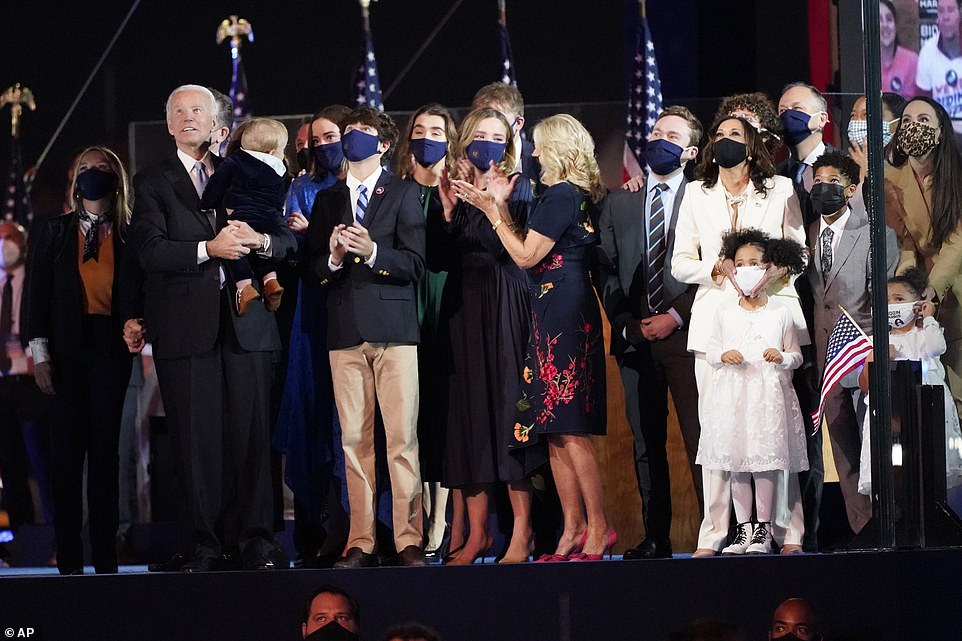 Yesterday was Liberation Day. The entire country and planet exploded out onto the streets to scream, shout, dance, bang pots and pans, launch fireworks and cheer in the greatest spontaneous mass celebration of an event not seen since 1945. Bells tolled in Paris. Fireworks launched in London. It was simply amazing to see. It was as if a giant weight of anxiety was lifted. Anxiety over the prolonged vote count and anxiety over having a fascist racist monster, literally the worst human being to ever hold office, as our President, a President who actively sought to harm those he hated, and he hated everyone but himself.

President-elect Joe Biden’s speech last night echoed his standard call for unity and healing, but it was so damn refreshing to have a normal and decent human being at the helm just trying to do the right thing. That seems like a fairly low bar, but it’s sure is refreshing.

So the first song to play during the fireworks at the Biden Victory speech was Coldplay’s Sky Full of Stars. I don’t think a lot of people know the backstory to that. It was one Beau’s favorite songs, and it was played by Chris Martin at his funeral. When it starts playing, you see Beau’s daughter hug Joe in the video below. Hearing the song played tonight, seeing the Biden family, listening to the song, it got a little dusty in here.

“President-elect Joe Biden is planning to quickly sign a series of executive orders after being sworn into office on Jan. 20, immediately forecasting that the country’s politics have shifted and that his presidency will be guided by radically different priorities,” the Washington Post reports.

“He will rejoin the Paris climate accords, according to those close to his campaign and commitments he has made in recent months, and he will reverse President Trump’s withdrawal from the World Health Organization. He will repeal the ban on immigration from many Muslim-majority countries, and he will reinstate the program allowing “dreamers,” who were brought to the United States illegally as children, to remain in the country, according to people familiar with his plans.”

Josh Marshall: “We see again the vast consequence of Barack Obama’s decision to choose Biden as his running mate in 2008. Certainly this moment doesn’t happen without that choice. One of the things we know about life is that of course no one is perfect. People have foibles and reverses, sometimes devastating ones. But there are these confluences of events when a person has their moment, qualities which may have been liabilities or simply mundanities in most circumstances are suddenly matched to history. The qualities that perhaps for much of his political career simply made Joe Biden a decent guy or someone with a big heart made him a perfect foil for Donald Trump and all the selfishness and casual aggression that typifies him. As Adam Serwer has aptly captured it, with Trump, the cruelty is the point. With Biden empathy and an open handed embrace of suffering close to define his public persona.

Whether these qualities are of great political significance and value or will serve him well as President I can’t tell you. But to me it is one of these moments where a person who has had both failures and successes arrives at a juncture in history where his qualities are precisely suited to the moment.

He must feel that the winds of history are at his back. And he should.”

“President Trump’s aides described a leadership vacuum in the White House on Saturday after he lost re-election and internal finger-pointing began, even as his associates wondered how he would grapple with defeat,” Bloomberg reports.

“There was no all-hands staff meeting or memo on how officials should react. It was a marked contrast from the scene four years ago, when, after Trump won election, President Barack Obama gathered his own despondent staff in the Oval Office for a pep talk.”

“The void has left staffers unsure what’s next. Trump’s advisers are split on how far to take various legal fights, delaying consideration of strategy both politically and in the courts.”

“Top congressional Republicans declined to offer congratulations to President-elect Joe Biden, or even comment on his win, as the White House and its GOP allies remained defiant that the race isn’t over for President Trump,” the Washington Post reports.

“Despite Joe Biden’s apparent ascension as the 46th president of the United States, President Trump’s campaign is barreling forward with a blitz of legal fights in key states while still scrambling to find instances of voter fraud,” ABC News reports.

“But inside the campaign, sources, who spoke on the condition of anonymity for fear of retaliation, say fatigue and disappointment has hit the rank and file on the president’s team, and the reality is settling in that the president lost the election.”

“This fucking virus, what does it have to do with me getting reelected?”

Susan Glasser: “For four years—and, really, for his whole life—Trump had managed to avoid this moment. In the three days since Election Night, with the race still uncalled but leaning Biden’s way, the President had raged on Twitter, fumed in private, and publicly claimed victory, even as the race was slipping away from him. ‘STOP THE COUNT!’ he insisted, on Thursday. But they didn’t. And, by the end of Friday, not only were the votes still being counted, but they pointed to a result, a decisive, declarative, inarguable result: the 2020 Presidential election was over, and Donald Trump had lost.”

“The official end did not come for a few more agonizing hours, until just before eleven-thirty on Saturday morning, when the Associated Press and the television networks finally made the call. In a fitting coda to four years of his trollish rule, Trump had tweeted less than an hour earlier, ‘I WON THIS ELECTION, BY A LOT!’ Then he went golfing. But the Constitution does not include a provision for sore losers. It does not matter whether Trump concedes: Biden has won.”

Here are the major newspaper ledes:

New York Times: “Joseph Robinette Biden Jr. was elected the 46th president of the United States on Saturday, promising to restore political normalcy and a spirit of national unity to confront raging health and economic crises, and making Donald J. Trump a one-term president after four years of tumult in the White House.”

Washington Post: “Joseph Robinette Biden Jr. was elected the nation’s 46th president Saturday in a repudiation of President Trump powered by legions of women and minority voters who rejected his handling of the coronavirus pandemic and his divisive, bullying conduct in office.”

Wall Street Journal: “Joe Biden will be the next president of the United States after crossing 270 electoral votes, the Associated Press said, following a campaign in which he focused on tackling the coronavirus pandemic and pledged to unite a deeply divided nation that voted in record numbers on each side.”

Los Angeles Times: “Joe Biden was elected the 46th president of the United States on Saturday when Pennsylvania delivered the electoral votes he needed to claim the White House, ending a vitriolic campaign that sorely tested the nation amid a pandemic and deep partisan divisions.”

Trump advisers expect the president to let his campaign’s legal efforts play out before conceding the race. One adviser, asked by the Wall Street Journal if he expected the president to concede the race, replied via text message: “Lol.”

Queens Daily Eagle: “A 74-year-old Jamaica Estates developer has less than three months left at his current address after Americans overwhelmingly voted him out of the White House, the AP projected Saturday.”

“A vice president-elect stepped forward on Saturday, and, for the first time in American history, she was not a man,” the Washington Post reports.

“Kamala Devi Harris, a daughter of Indian and Jamaican immigrants, is set to become the highest-ranking woman in the nation’s 244-year existence, as well as a high-profile representation of the country’s increasingly diverse composition.”

New York Times: “With her ascension to the vice presidency, Ms. Harris will become the first woman and first woman of color to hold that office, a milestone for a nation in upheaval, grappling with a damaging history of racial injustice exposed, yet again, in a divisive election. Ms. Harris, 56, embodies the future of a country that is growing more racially diverse, even if the person voters picked for the top of the ticket is a 77-year-old white man.”

“That she has risen higher in the country’s leadership than any woman ever has underscores the extraordinary arc of her political career.”

Washington Post: “Joe Biden, the projected winner of the presidency, will move to restore dozens of environmental safeguards President Trump abolished and launch the boldest climate change plan of any president in history. While some of Biden’s most sweeping programs will encounter stiff resistance from Senate Republicans and conservative attorneys general, the United States is poised to make a 180-degree turn on climate change and conservation policy.”

“Biden’s team already has plans on how it will restrict oil and gas drilling on public lands and waters; ratchet up federal mileage standards for cars and SUVs; block pipelines that transport fossil fuels across the country; provide federal incentives to develop renewable power; and mobilize other nations to make deeper cuts in their own carbon emissions.”

The Trump campaign “voter fraud” hotline “has turned into a nightmare… bombarded with prank calls from people laughing or mocking them over Biden’s win before hanging up,” ABC News reports.

“On Saturday morning, shortly before the AP and other news outlets called the election for Joe Biden, President Trump took to Twitter to announce that his lawyers would be holding a ‘big press conference’ in Philadelphia,” Slate reports.

“But there seems to have been some major confusion about where it would be held. First Trump tweeted it would take place at the ‘Four Seasons, Philadelphia.’ Trump later corrected himself and said that the news conference was going to be held at the Four Seasons Total Landscaping.”

“When journalists arrived at the site of the news conference, they were flabbergasted by the scene and many quickly speculated that someone in the Trump campaign made a serious mistake. After all, the parking lot of a landscaping business in the outskirts of the city in an industrial part of town was a drab backdrop for a news conference by a president who wanted to convince Americans he still had a chance of winning. And making matters even stranger, the landscaping business was between an adult bookstore and a cremation center.”

The New York Times reports that while the vote count continues, if Joe Biden wins the presidential race he is expected to announce his choices for Cabinet positions around Thanksgiving.

He continues: “The end of the Trump Presidency is, by any measure, a signal moment in modern American history. These four years have wrought tragic consequences; there is no question that another four would have compounded the damage immeasurably.”

The Guardian: “Multiple Rupert Murdoch-owned conservative media outlets in the United States have shifted their messaging in a seeming effort to warn readers and viewers that Donald Trump may well have lost the presidential election.”

“The new messaging appears to be closely coordinated, and it includes an appeal to Trump to preserve his ‘legacy’ by showing grace in defeat. The message is being carried on Fox News and in the Wall Street Journal and the New York Post – all outlets avidly consumed by Trump himself, especially Fox.”