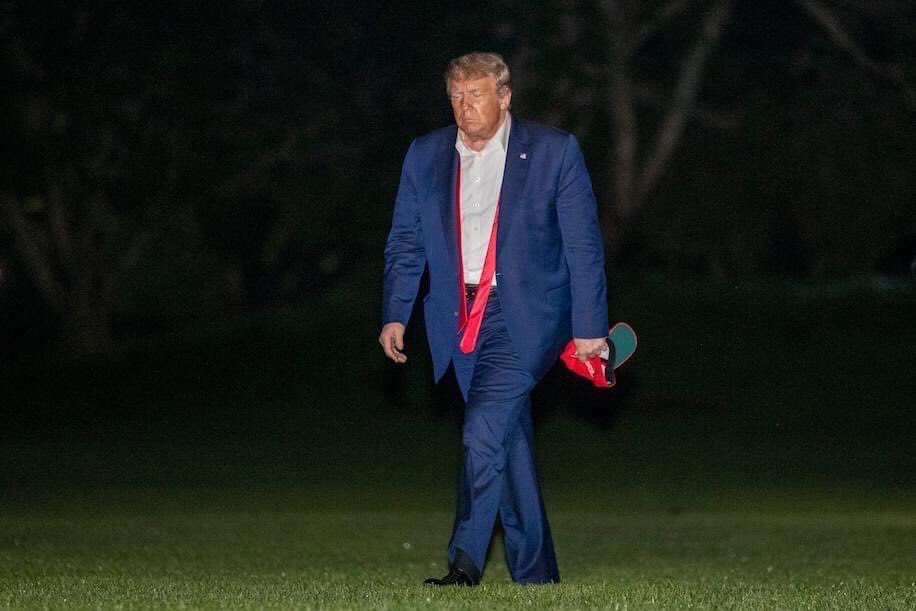 “President Trump is ‘furious’ at the ‘underwhelming’ crowd at his rally in Tulsa, Oklahoma, on Saturday evening, a major disappointment for what was expected to be a raucous return to the campaign trail after a three-month hiatus due to the coronavirus pandemic,” NBC News reports.

“The president was fuming at his top political aides on Saturday even before the rally began, after his campaign revealed that six members of the advance team on the ground in Tulsa had tested positive for COVID-19, including Secret Service personnel.”

Said one outside adviser: “This was a major failure.”

“President Trump and several staff members stood backstage and gazed at the empty Bank of Oklahoma Center in horror,” the New York Timesreports..

“The president, who had been warned aboard Air Force One that the crowds at the arena were smaller than expected, was stunned, and he yelled at aides backstage while looking at the endless rows of empty blue seats in the upper bowl of the stadium.”

“By the end of the rally, Mr. Trump’s mood had improved, advisers said. But after he left the stage, the fight seemed to have left him, at least temporarily. Leaving the arena, he wasn’t yelling. Instead, he was mostly muted.”

The Tulsa Fire Marshal told the Washington Post that were only about 6,100 people in the arena for President Trump’s campaign rally last night, even though the space can hold 19,000. The campaign had added an outdoor overflow area to accommodate what they anticipated would be a massive crowd.

When Trump arrived back at the White House he had his tie undone and draped around his neck, an unusual look for him.

“President Trump’s campaign manager, Brad Parscale, on Sunday denied that anti-Trump organizers on social media were to blame for the lower-than-expected rally turnout on Saturday in Tulsa,” Politico reports.

The Supreme Court will decide as soon as this week whether Trump’s accountants must turn his financial records and tax returns over to House Democrats and New York prosecutors investigating hush money payments, CNN reports.

House Judiciary Chairman Jerry Nadler told CNN that he believes Attorney General William Barr deserves to be impeached, but that pursuing it would be a “waste of time” because of the Republican-controlled Senate.

Politico: “Biden, a lifelong Catholic, has performed better in recent polling among white evangelicals — and other religious groups — than Democratic presidential nominee Hillary Clinton did in 2016, and is widely perceived as more religious than the current White House occupant. A Pew Research study conducted earlier this year showed that a majority of U.S. adults (63%) think Trump is ‘not at all’ or ‘not too religious,’ versus 55% who said they believed Biden is somewhat or very religious.”

“Many conservative evangelical leaders have argued that Biden’s positions on cultural issues — like abortion, judges and religious freedom — are disqualifying. Still, anxiety is growing inside Trump’s orbit about the former vice president’s ability to peel off Christian voters who supported him in 2016, including the 81% of white evangelicals he carried.”

New York Times: “TikTok users and fans of Korean pop music groups claimed to have registered potentially hundreds of thousands of tickets for Trump’s campaign rally as a prank. After @TeamTrump tweeted asking supporters to register for free tickets using their phones on June 11, K-pop fan accounts began sharing the information with followers, encouraging them to register for the rally — and then not show.”

“The trend quickly spread on TikTok, where videos with millions of views instructed viewers to do the same, as CNN reported on Tuesday.”

“Thousands of other users posted similar tweets and videos to TikTok that racked up millions of views.”

The U.S reported more than 30,000 new coronavirus cases on Friday, the highest number of daily infections recorded since May 1, CNBC reports.

Axios: “It’s a sign that the outbreak isn’t slowing down nationwide, even as the number of new cases in original hotspots like New York continues to drop. States like California, Texas, Florida and Arizona are reporting a surge of infections as they move to fully reopen parts of the economy and return to normal life.”

MIT Technology Review: “Data collection—as Parscale’s comment suggested—is perhaps the most powerful thing the Trump 2020 app does. On signing up, users are required to provide a phone number for a verification code, as well as their full name, email address, and zip code. They are also highly encouraged to share the app with their existing contacts. This is part of a campaign strategy for reaching the 40 to 50 million citizens expected to vote for Trump’s reelection: to put it bluntly, the campaign says it intends to collect every single one of these voters’ cell-phone numbers. This strategy means the app also makes extensive permission requests, asking for access to location data, phone identity, and control over the handset’s Bluetooth function.”

“The app has already received some criticism, not least from security researchers who found it had left information exposed that could allow hackers to access the user data. The response to this made the campaign’s priorities clear: they rapidly fixed the bug once it had been disclosed, but still maximized the data they themselves could collect. They want as much voter data as possible, even if they don’t want it left vulnerable to outsiders—and will use it in any way they see fit. “