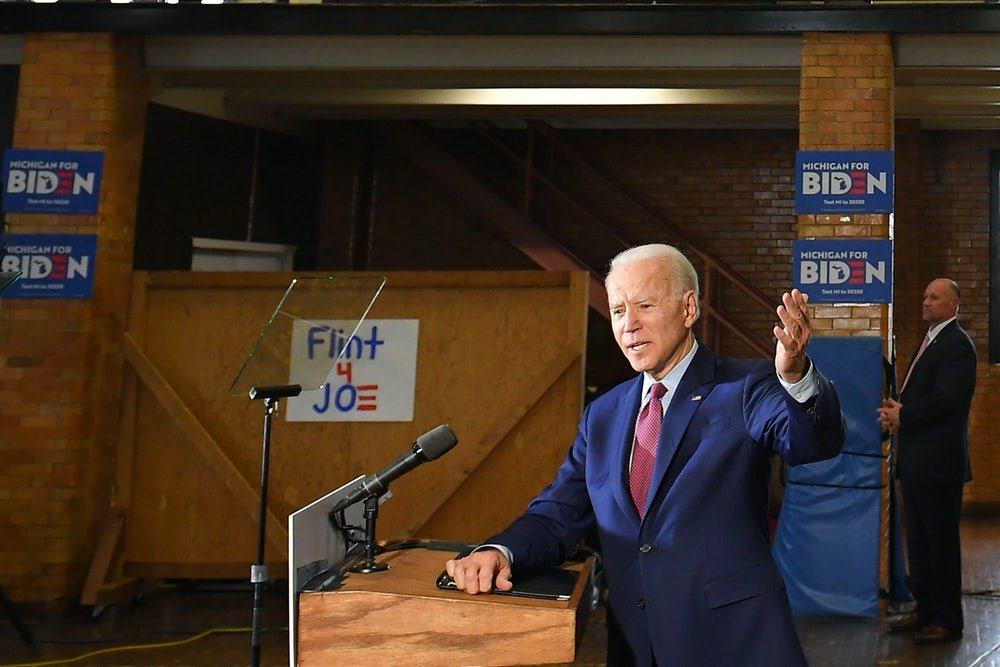 Also interesting: Biden’s lead expands with voters who say they have been hurt financially by the pandemic, 54% to 38%.

Inside Elections: “Using these toplines from Arizona, Florida, North Carolina, Wisconsin, Michigan, and Pennsylvania, President Trump trails Joe Biden by an average of 3.7 points in these battleground states. Pair that with his 6-point deficit nationwide, and it’s clear the incumbent is behind.”

New York Times: “In an attempt to ensure their contests become referendums on their own responses to the virus, rather than the president’s, vulnerable House Republicans are instead brandishing their own independent streaks, playing up their work with Democrats, doubling down on constituent service and hosting town-hall-style events — avoiding mention of Mr. Trump whenever possible.”

“It is an approach that looks familiar to former Representative Carlos Curbelo, Republican of Florida, who tried to distance himself from Mr. Trump on immigration and other issues in 2018 as he fought to hang onto his seat in a diverse South Florida district, but was swept out in a midterm debacle that handed Democrats control of the House.”

The Trump campaign has ordered red, Trump-branded face masks for supporters, the Wall Street Journal reports. Campaign officials have discussed giving away the masks at events or in return for donations.

Sen. Martha McSally (R-AZ) “has a new campaign ad featuring a cancer survivor who talks about how her “path collided” with McSally, whom she describes as a champion for protecting those with pre-existing medical conditions,” the Arizona Republic reports.

“The emotional television ad doesn’t disclose that the woman worked for McSally’s congressional office and as a campaign staffer over the years or that in 2014 she helped defend McSally’s attacks on the Affordable Care Act and roll its coverage protections back.”

“President Trump has opened a new charm offensive aimed at appealing to America’s older voters, who polls show are souring on his re-election amid the coronavirus crisis,” the Wall Street Journal reports.

“Mr. Trump’s team—at the campaign, inside the White House and among Republican allies he speaks with—largely believes the president can shore up support among seniors. The focus of the race, they said, will eventually turn toward Mr. Trump as the best person to revive the economy.”

Said Axelrod: “Had any credible issue been raised, you can be sure Biden would not have been the nominee. Obama would not have tolerated it, even if he and Biden were close then, which they were not.”

Politico: “Two months after ending her presidential campaign and amid vice presidential speculation, the Minnesota Democrat is launching a new effort to help direct money and campaign help to down-ballot Democrats. The endeavor — called the Win Big Project, a play on one of Klobuchar’s 2020 campaign slogans — started on Friday by endorsing a slate of a dozen House and Senate candidates.”

Miami Herald: “A challenged law giving top billing on the Florida ballot to candidates from the current governor’s political party will stand, an appeals court ruled Wednesday, returning a political advantage to the GOP in a key swing state ahead of the 2020 election.”

I am not going to be covering the false allegation of Tara Reade. Biden has denied it and after reviewing the myriad holes in her many changed story, she has no credibility and is likely a Russian plant. Proof of that is that is Reade wrote several Medium posts in 2018 praising Russian president Vladimir Putin. Wrote Reade: “President Putin has an alluring combination of strength with gentleness. His sensuous image projects his love for life, the embodiment of grace while facing adversity.”

A new PRRI poll shows that President Trump’s favorability rating has dropped seven points over the last four weeks to 43% while a 54% majority who hold mostly or very unfavorable views of him.

“Trump benefited from a brief rally around the flag effect as the coronavirus pandemic began to spread in the U.S. But over the last four weeks — as the total number of reported U.S. cases of the coronavirus increased exponentially from around 33,000 cases to more than 900,000 cases — this boost has rapidly dissipated.”

Associated Press: “For some Republicans, the prospect of an election that is almost wholly a referendum on Trump is unnerving. Though the president’s base remains loyal, a significant portion of GOP voters view him skeptically on a range of personal qualities. He pulled many of those voters to his side in the 2016 election by drawing an aggressive contrast with Democrat Hillary Clinton. He planned to do the same in 2020 with Biden, with the added tailwind of a surging American economy.”

“Now, that economy is crumbling around Trump. A staggering 30 million Americans have lost their jobs in the past six weeks as businesses have shuttered due to stay-at-home restrictions aimed at containing the pandemic. One of the president’s own economic advisers predicted nationwide unemployment could reach 20% by June.”

Said GOP strategist Scott Reed: “It’s Donald Trump versus the coronavirus and the recovery. Biden is a sideshow.”

Maeve Reston: “At a time when large majorities of Americans support the stay-at-home orders that their governors have issued to keep them safe, President Trump once again stepped into the role of rabble-rouser on Friday by siding with the small group of agitators who turned up at Michigan’s state Capitol the previous day to protest Democratic Gov. Gretchen Whitmer’s stringent stay-at-home order.”

“Though a mere 400 to 700 people joined the protest — some of them armed — in a critical swing state of nearly 10 million people, Trump once again gambled that the smart political play was to back the fiery few rather than worrying about how he might alienate the many middle-of-the-road voters in the Great Lakes State who remain concerned about the coronavirus’ ravages of their state.”