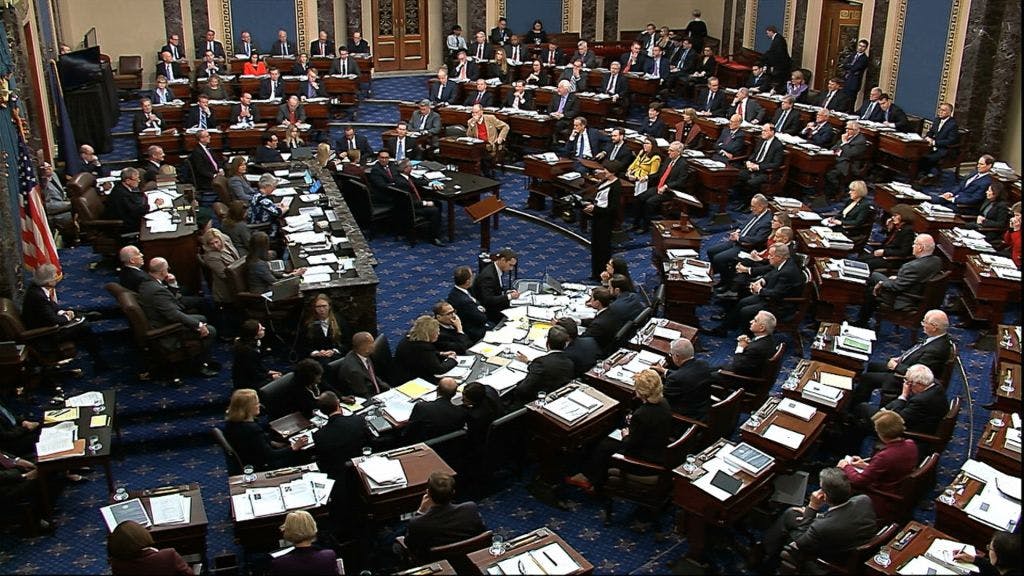 The Impeachment Trial of Donald J. Trump commenced today with debate over Mitch McConnell’s Trial Rules and Chuck Schumer’s proposed amendments to the rules. McConnell already had to change his proposed rules for President Trump’s impeachment trial by allowing each side to have three days to present their arguments, instead of just two, PBS reports.

That change could allow the trial to wrap up earlier each evening instead of pushing it past midnight. McConnell will also now automatically add evidence from the House impeachment inquiry to the record unless there’s an objection. His draft resolution required a majority vote.

The New York Times reports McConnell “made changes to the proposed rules for the trial after Republicans senators, including Susan Collins of Maine, raised concerns about two provisions.”

House impeachment manager Adam Schiff said that if the Senate does not allow witnesses and documents at trial, the chamber will be guilty of “working with the President to obstruct the truth from coming out,” CNN reports.

He added: “If Sen. McConnell makes this the first impeachment trial in history without witnesses or documents, it will not prove the President innocent — it will merely prove the Senate guilty of working with the President to obstruct the truth from coming out.”

Yahoo News reporter Jon Ward says Republicans appeared “uncomfortable” as House impeachment manager Adam Schiff made the case for President Trump’s removal from office. Said Ward: “I sat in chamber for entire Schiff speech. That was a mauling. Trump team thought they were there to debate process and Schiff ambushed them with a full-throated case for impeachment. Republicans were visibly uncomfortable. Sekulow and Cippolone responses were rambling and bombastic.”

Playbook: “Substantively, Senate Republicans defeated every effort by Senate Democrats to alter the rules of the impeachment trial to allow for guaranteed access to witnesses and documents.”

“Politically, though, there is some upside for Democrats. If you accept the argument that President Trump is likely going to be acquitted, isn’t it better for Democrats to own no part of the trial, so they can call it a sham and beat Republicans over the head with it later this year? They will lose these procedural fights, complain loudly about it and wave the trial in the faces of vulnerable Republicans as an example of the party’s fealty to Trump.”

“One option being discussed would be to move Bolton’s testimony to a classified setting because of national security concerns, ensuring that it is not public.”

“But that proposal, discussed among some Senate Republicans in recent days, is seen as a final tool against Bolton becoming an explosive figure in the trial. First, Republicans involved in the discussions said, would come a fierce battle in the courts.”

“The nearly four-and-a-half minute slot, narrated by the Biden campaign’s rapid response director, Andrew Bates, walks through a historical timeline dating back to 2014, when Russia invaded the country and the U.S. joined in protecting Ukraine against aggression. Thirty seconds into the video, Bates plainly outlines the case they have long used against Trump’s claims on Hunter.”

“A Government Accountability Office report accusing President Trump of violating the law is taking on heightened importance at the start of his impeachment trial,” Axios reports.

“The key argument Trump’s legal team plans to make is that the articles of impeachment are deficient on their face because, unlike previous impeachment attempts, they don’t allege that Trump broke the law. But Democrats plan to highlight how the report… clearly finds that the Trump administration violated the law.”

Said one Democratic leadership aide: “This is a big part of our case. It shows the extent to the president went to to advance his scheme; he went so far to break the law. It’s an important piece of evidence and only adds to the mountain and body of evidence that we already have.”

Former Sen. Jeff Flake (R-AZ) told CBS News that the Republicans’ “cult of personality” around President Trump will hurt the party even after the president leaves office.

Said Flake: “This president won’t be there forever. He’ll either be gone by this time next year or four years from now. Then what happens to the Republican Party? My fear is people out there know that, even if this is not an impeachable offense, that the president did something wrong, and for Republicans to maintain that he didn’t is just wrong, and this has long-term ramifications for the party if we act as if we are just devoted to the president no matter what, and this cult of personality that we’ve seen, we certainly saw it in the House.”

Rick Wilson: “The sooner Democrats start realizing this, the better off they’ll be.”

“Trump’s legal team, including not one but two of Jeffrey Epstein’s defenders, wasn’t selected on the basis of academic prowess, knowledge, or experience, but notoriety and willingness to work for this unapologetic criminal. Its biggest names are representing Trump not in spite of but because of the fact that they are flashy media characters.”

“The Democrats will need to show not only expertise on the subject matter at hand, but some passion and fire in the course of this. They’ll need to bring more energy and direction to the floor of the Senate. Trump and McConnell aren’t hiding their cards: Rules are for suckers; dignity is for marks; and this is a bar fight, not a debating society.”

David Graham: “The Senate has to at least have the appearance of a trial to provide cover to vulnerable Republicans, such as Cory Gardner of Colorado and Susan Collins of Maine. But it can’t be too fair, because that could expose Republicans to primary challenges from the right, which would make McConnell’s delicate act of keeping his caucus together only more challenging. His best prospect is to run the gauntlet and hope that in the process he makes life difficult for endangered Democratic senators, such as Doug Jones of Alabama.”

“That’s the paradox of the Senate’s handling of impeachment. The proceedings there look like a flimsy excuse for a trial, and they are. But under the surface, a series of real trials is going on. Vulnerable senators sit in the dock, the jurors are voters, and the verdicts won’t come back until November.”

“The Trump administration plans to add to the number of countries covered under its travel ban, including Nigeria, Africa’s most populous country, along with others in Africa and Asia,” the Wall Street Journalreports.

I hate Glenn Greenwald with the fire of a thousand suns, consider him a willful idiot when it comes to 2016 and Russia, and even I find his arrest a threat to press freedom conducted by a fascist government. Yes, yes, irony abounds and what goes around comes around, but Brazil must drop the charges at once and let him free.

“President Trump said Tuesday that he is serious about imposing tariffs on European automobiles if he can’t strike a trade agreement with the European Union,” the Wall Street Journal reports.

Said Trump: “They know that I’m going to put tariffs on them if they don’t make a deal that’s a fair deal.” However, Trump declined to say what deadline he is imposing: “They know what the deadline is.”

Within minutes of Senate Republicans voting to table an amendment to subpoena documents for the impeachment trial, Sen. Susan Collins (R-ME) issued a statement indicating that she will “likely” support calling more witnesses after the opening statements are finished.

“President Trump bragged Tuesday about the American economy and rejected warnings that the world is barreling toward an environmental crisis, a key concern at this year’s World Economic Forum,” the Los Angeles Times reports.

Said Trump: “We must reject the perennial prophets of doom and their predictions of the apocalypse. They are the heirs of yesterday’s foolish fortune tellers.”

President Trump told the Wall Street Journal that he didn’t know anything about Swedish climate activist Greta Thunberg but called her “very angry.”

President Trump trumpeted what he called “America’s extraordinary prosperity” on his watch, taking credit for a soaring stock market, low unemployment and a “blue collar boom” in jobs and income, in a presidential turn on the world stage also meant to make impeachment proceedings in Washington look small, the Washington Post reports.

Said Trump: “America is thriving; America is flourishing and yes, America is winning again like never before.”

Politico: “Trump’s early decision to maintain his grip on his sprawling real estate empire — despite his pledge to put his business aside while in the White House — has created a vast web of potential conflicts of interest, accusations about his policies being driven by his business interests and even possible violations of the law.”

“Even as Trump kicks off his fourth year as president this week facing the stain of an impeachment trial, he has managed to skirt accountability for widespread possible conflicts of interest that critics say represent a blatant abuse of power and create dangerous risks to the integrity of the presidency.”

“But it stands out to me as a particularly clear moment when the assault on immigration, driven by an ideology of racist nationalism, intersects with the crumbling of the separation of powers and the falling away of constraints on the presidency. Legislative control over the ‘power of the purse’ is a foundational principle of the separation of powers, and Congress has not only repeatedly refused to fund construction of a wall, but passed a resolution expressly disapproving of President Trump’s declaration of a state of emergency to allow himself to repurpose funds. Trump vetoed the disapproval, and an override failed. The Court’s precedent seems to decisively shift budgetary control to the executive, subject to legislative reclamation only with two-thirds majorities.”