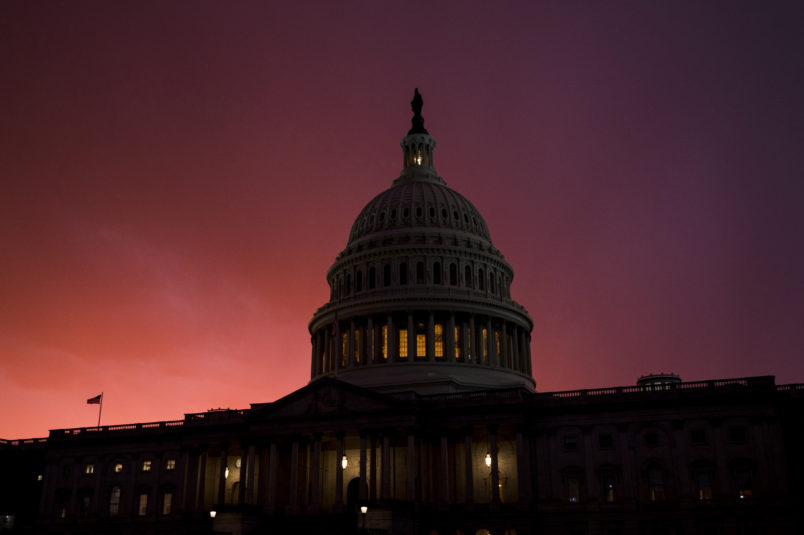 Politico: “The first impeachment in a generation is about to hit the House floor — but not before a final burst of partisan rancor and a late-night endurance test for sleep-deprived and increasingly grouchy lawmakers.

The House Judiciary Committee was moving Thursday to approve articles of impeachment against President Donald Trump, while fending off last-ditch efforts by Republicans to derail them before a final floor vote expected next week.

The panel’s vote on the articles — one charging Trump with abuse of power, the other with obstructing congressional investigations — will mark just the fourth time in history the impeachment process has advanced this far.

The committee began formally debating the articles late Wednesday night, with lawmakers making direct appeals to their colleagues across the aisle. The debate continued late into the night on Thursday as Republicans offered several amendments to chip away at the articles of impeachment; all were doomed to fail on party-line votes.”

The committee adjourned until 10 am this morning for the final committee vote on the two Articles of Impeachment.

President Trump slammed Time magazine’s decision to name teenage climate activist Greta Thunberg as its Person of the Year as “so ridiculous.”

Said Trump: “So ridiculous. Greta must work on her Anger Management problem, then go to a good old fashioned movie with a friend! Chill Greta, Chill!”

The Washington Post reports Thunberg wasted little time in offering a rejoinder to Trump. Shortly after his tweet, she had updated her Twitter profile to read: “A teenager working on her anger management problem. Currently chilling and watching a good old fashioned movie with a friend.”

“The House on Thursday passed a sweeping bill aimed at lowering prescription drug prices, a step toward a long-held Democratic goal that was met with sharp Republican resistance,” The Hill reports.

“The bill passed on a largely party-line vote of 230 to 192. The measure, which would allow the government to negotiate lower prices for prescription drugs, is one of House Democrats’ top priorities, and is expected to be touted by vulnerable Democrats up for reelection next year.”

Jonathan Chait: “President Trump is facing impeachment primarily for abusing his power for political gain, extorting a foreign country to discredit his political rivals. The secondary aspect of the plot is that the target of his extortion is hardly random. Ukraine is the victim of Russian aggression, and Russia’s continuing incursions into Ukrainian territory is the muscle that gave Trump’s threats leverage. Trump’s domestic interests are one intended beneficiary of his scheme. The other is Vladimir Putin…”

“Meanwhile, federal prosecutors charged yesterday evening that Lev Parnas, an associate of President Trump who represented him in Ukraine, was wired $1 million from a Russian bank account weeks before his arrest. Which is to say, Trump’s Ukraine plot appears to have been financed by Russia…”

“Rudy has worked as Trump’s lawyer for ‘free,’ but Parnas paid him half a million dollars for his work. If Parnas himself was being paid by Russian sources, this means the Russians were essentially subsidizing Trump, paying for the work themselves so he didn’t have to lay out a dime of his own money.”

CNN: “Privately, he’s stewing…. Trump is somewhat taken aback that his actions toward Ukraine are ultimately what led to his likely impeachment.”

Garrett Graff: “The idea that Fox News represents a literal threat to our national security, on par with Russia’s Internet Research Agency or China’s Ministry of State Security, may seem like a dramatic overstatement of its own—and I, a paid contributor to its competitor CNN, may appear a biased voice anyway—but this week has made clear that, as we get deeper into the impeachment process and as the 2020 election approaches, Fox News is prepared to destroy America’s democratic traditions if it will help its most important and most dedicated daily viewer.”

“The threat posed to our democracy by Fox News is multifaceted: First and most simply, it’s clearly advancing and giving voice to narratives and smears backed and imagined by our foreign adversaries. Second, its overheated and bombastic rhetoric is undermining America’s foundational ideals and the sense of fair play in politics. Third, its unique combination of lies and half-truths has built a virtual reality so complete that it leaves its viewers too misinformed to fulfill their most basic responsibilities as citizens to make informed choices about the direction of the country.”

“Senate Majority Leader Mitch McConnell (R-KY) is expected to hold a final vote to acquit President Trump should he be impeached, when a majority of senators believe his trial has run its course instead of holding a vote on dismissing the articles of impeachment,” CNN reports.

“That’s significant, because Republicans want to have a vote on acquittal — to clear the President of the charges against him — not simply rely on a 51-vote threshold procedural motion to dismiss the hotly disputed case.”

Rep. Mark Meadows (R-NC) said he thinks Harvard Professor Alan Dershowitz should be a member of President Trump’s legal team for his impeachment trial in the Senate, The Hill reports.

“House Democratic leaders are bracing for some defections among a group of moderate Democrats in swing districts who are concerned a vote to impeach President Trump could cost them their seats in November,” the Washington Post reports.

“Lawmakers and senior aides are privately predicting they will lose more than the two Democrats who opposed the impeachment inquiry rules package in late September… Two senior Democratic aides said the total could be as many as a half-dozen while a third said the number could be higher.”

“Predictions about some defections comes as a core group of centrists from districts Trump won in 2016 are having second thoughts. While many knew impeachment would never be popular in their GOP-leaning districts, some have been surprised that support hasn’t increased despite negative testimony about Trump from a series of blockbuster hearings last month.”

Speaker Nancy Pelosi told reporters that the Democrats will not be whipping the impeachment vote.

She also confirmed the House vote would take place next week.

“Now that he’s filled virtually every vacancy in the powerful appellate court system, the Senate majority leader will try and cram through 18 lower-level lifetime judges next week, some of them supported by Democrats.”

“As the House barrels toward a vote next week to impeach President Donald Trump, behind-the-scenes jockeying has intensified to secure a coveted, high-profile job: impeachment manager,” Politico reports.

“These Democratic lawmakers, handpicked by Speaker Nancy Pelosi, will effectively serve as the prosecutors making the case to the Senate that Trump deserves to be removed from office over his alleged misconduct centering on the Ukraine scandal. The topic has come up during recent Democratic leadership meetings, according to lawmakers and aides. And several members have been seeking Pelosi out directly — even making a beeline for her on the House floor during votes — to deliver their in-person pitch.”

“The Defense Department’s internal watchdog plans to review a recent Army Corps of Engineers decision to award a $400 million contract for border wall construction to a North Dakota company that has been publicly and privately endorsed by members of the Trump administration, including the president himself,” NBC News reports.

Politico: “Democrats are only just beginning to confront the paradox that their imminent impeachment vote creates: What happens when a remorseless president commits the same behavior that got him impeached in the first place — only this time after the House has already deployed the most potent weapon in its arsenal?”

“There’s no roadmap for Congress to handle an already-impeached president who could have as many as five years left in office. Democrats acknowledge there’s no realistic path or political will to revisit impeachment in Trump’s first term, especially with the 2020 election less than a year away.”

“But far from being deterred by impeachment, Trump appears emboldened — suggesting impeachment may not be the kind of bulwark against misconduct envisioned in the Constitution.”

Playbook: “While lawmakers in the Capitol have settled into a familiar and tested routine — Republicans defending the president, Democrats ripping him to shreds — the president seems to have no strategy. The White House complains about the process, calling it flawed and crooked. And the president’s aides, advisers and surrogates keep saying the Senate process will be fairer, as they look forward to hearing from Hunter and Joe Biden. The Bidens will not be testifying in this trial, senators have said, so the White House is constantly creating a construct in which the GOP Senate will have let down the base.”

“Yet Democrats don’t seem to have a plan, either, for what happens after the Senate acquits Trump. How will Democratic voters process that inevitable result? And how will they respond when Trump claims the Senate vote has vindicated him? And finally, what will they do if he keeps engaging in what they’ve deemed to be impeachable acts?”

“The U.S. and China have reached agreement on a tentative trade deal, which President Trump is expected to formally approve this afternoon,” the Washington Post reports.

Said one insider: “The deal is essentially done. The mechanics of how you execute it and how you get it signed still have to be worked out.”