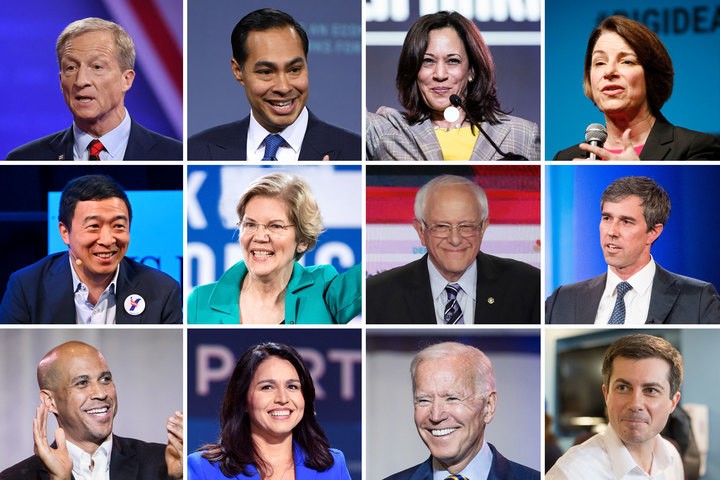 As President Trump faces possible impeachment and removal from office, a new SurveyUSA poll finds that Vice President Mike Pence performs on average no worse than President Trump in head-to-head match-ups against the leading Democrats.

A new CNN poll finds 50% of Americans say President Trump should be impeached and removed from office, a new high in the poll and the first time that support for impeachment and removal has significantly outpaced opposition.

“Internal focus groups conducted by Pete Buttigieg’s presidential campaign this summer reveal a key reason why he is struggling with African-American voters: many see his sexuality as a problem,” the Columbia State reports.

The 21-page report, conducted by the Benenson Strategy Group with black Democratic South Carolina voters in mid-July, found that “being gay was a barrier for these voters, particularly for the men who seemed deeply uncomfortable even discussing it… Their preference is for his sexuality to not be front and center.”

Wall Street Journal: “Trump rallies are more meticulously produced than the loose and thinly staffed events of four years ago. And while the events don’t earn nearly as much free media as in 2016—cable networks stopped airing them at full length months ago—the campaign has turned them into giant, roving field offices that vacuum up personal data from rallygoers, register new voters and sign up his most enthusiastic supporters as volunteers.”

“Mr. Parscale discussed with political operatives the possibility of using facial recognition at rallies to help analyze reactions from supporters, but was told by at least one company that the technology wasn’t reliable yet.”

Playbook: “Breathe that in for a second. The Trump campaign was considering using facial recognition technology to identify its rally-goers. Republicans have been skeptical of the government using it because many consider it obtrusive and untested. A private entity — the Trump campaign — was considering it. This is a huge scoop that gives us a unique view into the president’s campaign.”

“Kamala Harris catapulted to Democratic stardom on a narrative based on her role as California’s attorney general during the housing crisis, when she was an unrelenting adversary of big banks and mortgage lenders, and a champion of consumers,” Politico reports.

“But a new book by Pulitzer Prize-nominated reporter Aaron Glantz challenges that storyline, arguing that Harris not only allowed Steve Mnuchin’s OneWest bank to get away with foreclosing on tens of thousands of state homeowners, but then tried to bury the evidence.”

“Even amid a historic impeachment process, these patterns suggest Trump could have a significant media advantage over Democrats leading up to 2020 — though there’s no guarantee that the end result will be the same,” Axios reports.

“Democrats haven’t made a digital comeback, despite vowing to match the digital sophistication of Republicans after 2016… The Trump campaign continues to outspend all of its Democratic challengers combined on digital advertising. This is in part because large progressive groups haven’t come together to leverage their spending power on big platforms to create efficiencies.”

“Some aspects of the Democratic Party are still entrenched in a legacy media culture. There’s long been a complaint among progressive activists that Democrats’ heavy reliance on outside consultants who are biased towards television and traditional media weakens the incentives for candidates to invest as much in digital.”

That’s why she is the most likely nominee.

Politico: “Donald Trump is going all-in on a trio of Southern governor’s races in November, gambling that a clean sweep will help him regain his political footing at the most perilous moment of his presidency.”

“Trump is expected to barnstorm Kentucky, Mississippi, and Louisiana over the next few weeks, while dispatching prominent supporters to help in each contest. And Vice President Mike Pence is planning a bus tour through eastern Kentucky, a pivotal area on the state’s political map that could decide the fate of Republican Gov. Matt Bevin.”

“Trump badly needs a boost right now, and the White House sees the elections in the conservative states as the best near-term hope of achieving it.”

CBC News is projecting that Justin Trudeau’s Liberals will form a minority government in Canada.

Trudeau will serve another term as prime minister.

New York Times: “Would Hillary Clinton get in, the contributors wondered, and how about Michael R. Bloomberg, the former New York mayor? One person even mused whether Michelle Obama would consider a late entry, according to two people who attended the event, which was hosted by the progressive group American Bridge…”

“Mrs. Clinton and Mr. Bloomberg have both told people privately in recent weeks that if they thought they could win, they would consider entering the primary — but that they were skeptical there would be an opening.”

“Former Secretary of State John F. Kerry, who associates say has wondered aloud about whether he should have run and has found it hard to watch Mr. Biden’s missteps, has also been urged to get in. But he still thinks the former vice president, who was once his longtime Senate colleague, is the party’s best nominee.”

Fred Barnes: “Political commentator Hugh Hewitt has urged Trump to reject both the commission and its plans and ‘announce that if any debates will be held at all in 2020, it will be only after extensive, direct negotiations between him and the eventual nominee of the Democratic Party and their respective designated representatives.’”

“There was more to Hewitt’s plan. The negotiations ‘should begin from a premise that the Republicans will no longer play by the biased rules of a deeply unbalanced Manhattan-Beltway media elite,’ he wrote. ‘Explicitly articulating the declaration of intent now, along with the possibility that, as in 1968 and 1972, there won’t be any debates, would do both the public and the elite media great service.’”

“Democrats and the establishment press are sure to balk at Hewitt’s proposal, but Trump can be expected to embrace it. There’s no obvious middle ground between these notions of how to set up presidential debates. So, next year’s election may lack televised confrontations.”