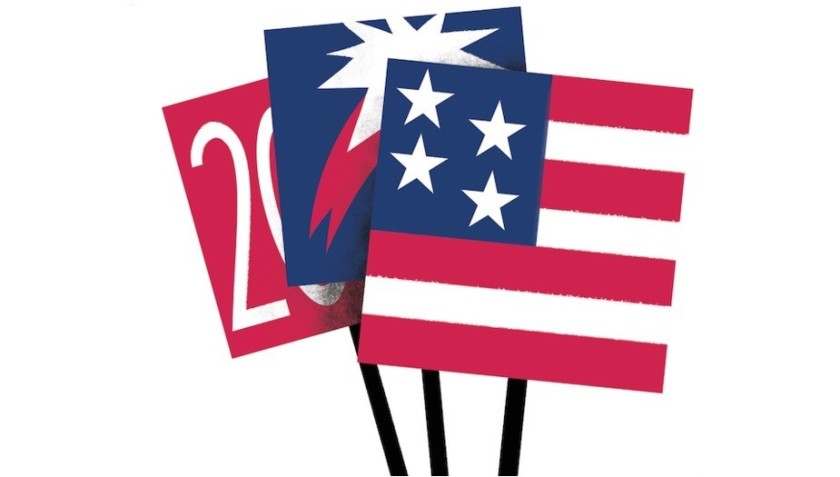 Rounding out the Democratic field are Pete Buttigieg at 6%, and Beto O’Rourke and Andrew Yang at 2% each. There are four candidates with 1% each and 14 candidates at less than 1% each.

Said pollster Mary Snow: “In the blink of an eye, the post-debate surge for Kamala Harris fades and Joe Biden regains his footing among Democratic presidential contenders Electability remains his strongest pull. Across the board, Biden remains by far the Democrat seen as having the best chance of defeating President Trump.”

HuffPost: “Harris on Monday morning released a plan to create a new, government-run insurance plan designed to cover all Americans and pay for nearly all their medical expenses.”

“It would eventually replace employer-sponsored plans, over the course of a decadelong transition, but it would allow private insurers to offer an alternative form of coverage, much as they do today for seniors on Medicare.”

Washington Post: “Priorities USA, an independent Democratic effort focused on defeating President Trump in 2020, raised $23.4 million through the first half of the year, while reporting pledges of an additional $64.6 million, the group announced Monday.”

The organization, which took a lead role in attacking Republican presidential candidates in 2012 and 2016, has pledged to spend $100 million to defeat Trump through the Democratic primaries, largely through television and digital advertising.”

Sen. Cory Booker’s presidential campaign told CNN that he has qualified to participate in the third debate coming up this fall.

“Booker surpassed the higher threshold of 130,000 unique donors, his campaign said Monday, after having previously met the polling requirements for the debate, slated for September. Booker’s campaign said more than a quarter of those donors contributed since the first June debate, when he dominated in speaking time among the candidates.”

“Seven Democratic presidential candidates, including Sen. Elizabeth Warren and Mayor Pete Buttigieg, have promised that their first legislation as president would be an ambitious clean-government bill, earning their campaigns an influential reform group’s stamp of approval,” the New York Times reports.

“End Citizens United, a grass-roots advocacy group that played a key role in the 2018 midterm elections, said the seven candidates had vowed to prioritize ethics and campaign finance reform in a commitment the group is calling the “Reform First” pledge. The group said it would begin raising money for all seven candidates online and highlight their campaign activities on social media.”

Cornell professors Peter Enns and Jonathon Schuldt write in the Washington Post that their research finds the backlash from President Trump’s racist rhetoric is likely to offset any electoral benefit from Trump’s base.

“Not only did Democrats make major gains in the midterms when Trump doubled-down on his xenophobic rhetoric, the strategic focus on immigration in 2018 may have hurt Republicans. That Trump’s approval ratings are net negative despite a strong economy may also signal that his rhetoric isn’t working.”

Chicago Tribune: “As 20 presidential contenders descend upon Detroit for the second round of Democratic debates Tuesday and Wednesday, party officials and African American political leaders point to Clinton’s loss to Trump in Michigan as a cautionary tale of what can happen when a Democrat takes black voters for granted.”

“Trump won thanks in large part to the collapse of the so-called blue wall in Michigan, Pennsylvania and Wisconsin. While Clinton faltered among white working-class voters in all three states, she also notably underperformed in the urban centers of Philadelphia, Milwaukee and — most of all — Detroit.”

Washington Post: “He’s collecting millions of dollars in campaign donations, has hired experienced Democratic operatives and is paying his field organizers eye-popping wages, probably the highest in the primary campaign. O’Rourke has quickly built a large operation in Iowa, with 11 offices scattered throughout the state, and he welcomed crowds of at least 100 during his last two town halls there.”

“But those images belie the struggles he’s facing: spending money more quickly than he is raising it, polling nationally between 1 percent and 3 percent in the past month, and trying to convince voters he has the experience and vision to be president. After a first debate appearance that raised alarm among his major donors, there is ever-increasing pressure on O’Rourke to shine at Tuesday’s debate and remind Democrats why so many thought he could be a front-runner just a few months ago.”

“Hickenlooper and Bullock have struggled to gain traction in a crowded field of Democratic presidential candidates, but as governors, they have already proven they can be elected statewide. As Democrats gear up for a fight for the Senate, many are quick to say they believe Hickenlooper and Bullock would make formidable challengers to Republican senators up for re-election in Colorado and Montana.”

Axios: “They don’t want to talk about it, but the struggling Kirsten Gillibrand campaign appears to have spent a lot of time Googling Joe Biden as of late. The New York senator has publicly —and cryptically — alluded to unnamed Democratic candidates who ‘do not believe necessarily that it’s a good idea that women work outside the home.’ The remark, which she’s declined to clarify, has generated fervid speculation. ”

“Meanwhile, an account on the site newspapers.com that appears to be linked to her campaign has been gathering news articles about the former vice president’s stance on the child tax credit in the ’80s. (The newspaper.com account and related Twitter account appear to have been taken down after we approached the Gillibrand campaign for comment.)”

The Republican pathway for recapturing House control in next year’s election charges straight through the districts of the most vulnerable Democratic incumbents, especially freshmen. Judging from early but formidable cash advantages those lawmakers have amassed, ousting them won’t be easy,” the AP reports.

“Each of the 62 freshmen House Democrats has raised more money than their top opponent. The same is true for all 31 Democrats from districts President Trump had won in 2016 and for all 39 Democrats who snatched Republican-held seats last November.”

“In nearly all cases it’s not even close.”

Secretary of State Mike Pompeo appeared to close the door to a potential run in 2020 for a U.S. Senate seat in Kansas saying it was “off the table,” but he did not rule out the possibility of a presidential run in the future, Reuters reports.

Said Pompeo: “It’s off the table. As a practical matter, I’m going to serve as secretary of state every day that I get the chance to do so.”

First Read: “The good news for Biden: His poll numbers have snapped back to where they were before the first debates.”

“The bad news: It’s unlikely he can afford another rough outing, which would only increase the chatter that he might not be up for the rigors of a general-election fight against President Trump. And if that happens, that could produce maybe the most destabilizing event so far in the 2020 Democratic race, creating openings for several other Dem contenders.”

“Remember, anyone can have a bad debate performance — just ask Barack Obama in 2012. But if you’re Joe Biden and a Democratic Party that’s anxious about its prospects versus Trump, you can’t have two in a row.”