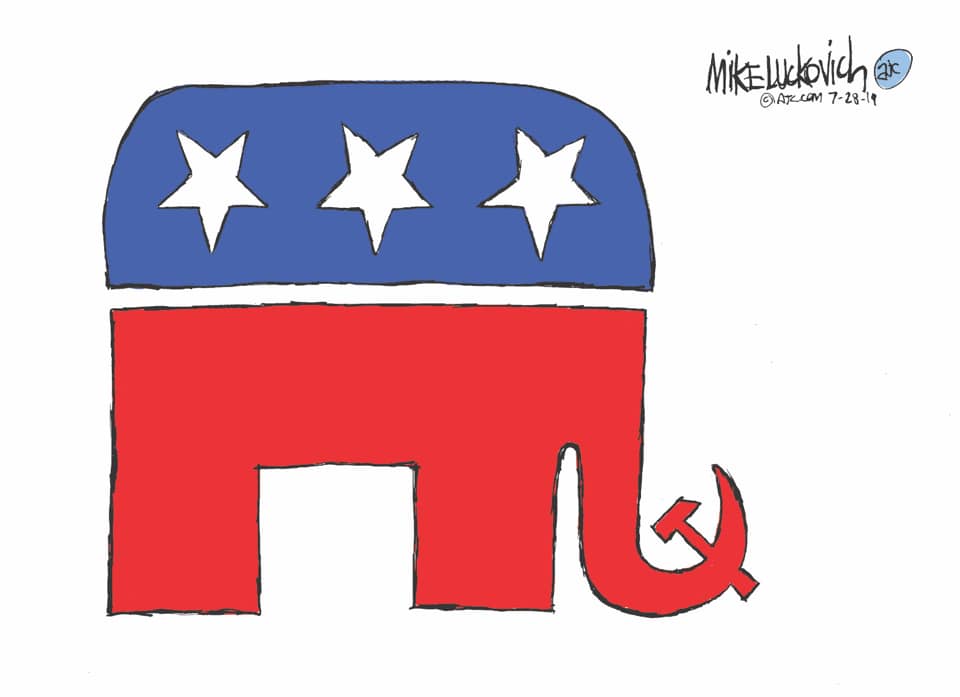 Tom Barrack, the longtime friend of President Trump and the chairman of his inaugural, is the subject of a federal probe into influence peddling by foreign governments, the New York Times reports.

“Investigators have looked in particular at whether Mr. Barrack or others violated the law requiring people who try to influence American policy or opinion at the direction of foreign governments or entities to disclose their activities to the Justice Department.”

“The inquiry had proceeded far enough last month that Mr. Barrack, who played an influential role in the campaign and acts as an outside adviser to the White House, was interviewed, at his request, by prosecutors in the public integrity unit of the United States attorney’s office in Brooklyn.”

“In a now-viral tweetstorm on Saturday, President Trump characterized Rep. Elijah Cummings’s Baltimore-based congressional district as a ‘rodent infested mess’ where ‘no human’ would want to live,” the Washington Post reports.

“His criticism rang with a particular irony in Baltimore County, where presidential son-in-law Jared Kushner owns more than a dozen apartment complexes that have been cited for hundreds of code violations and, critics say, provide substandard housing to lower-income tenants… Tenants of Kushner properties reported mouse infestations, mold problems and maggots.”

Josh Marshall: “US Ambassador to Israel David Friedman sat in on Israel’s weekly cabinet meeting today. Completely unprecedented. Not just in Israel. I’m curious whether a foreign ambassador has ever sat in on a cabinet meeting in any country ever.”

Meet the Press” host Chuck Todd pressed Schiff on whether Democrats were pursuing impeachment after they filed for special counsel Robert Mueller’s grand jury materials on Friday to decide whether or not to begin impeachment proceedings.

According to Schiff, getting the grand jury material and seeing the evidence Mueller found in his Russia probe is “the most important thing” right now.

“And the standard the court has set, that we have really set for the court, is are we preliminary to a potential impeachment? And I believe that we are,” the California Democrat said.

“Right now the most important thing is to obtain the grand jury material, to see the evidence. And the standard the court has set, that we have really set for the court, is are we preliminary to a potential impeachment? And I believe that we are.”

“Dan Coats, the director of national intelligence, is expected to step down in the coming days after spending his tenure at odds with President Trump over issues including Russia and Mr. Trump’s own attacks on the intelligence community,” the New York Times reports.

“To replace him the president was likely to tap Representative John Ratcliffe, a Texas Republican and staunch defender of Mr. Trump. As a member of the House Judiciary Committee, he sharply questioned Robert Mueller, the former special counsel, at last week’s hearing.”

House Judiciary Chair Jerry Nadler (D-NY) declined to tell ABC News whether Democrats are pursuing an official impeachment inquiry, but repeated what he wrote in a court filing last week: “We have impeachment resolutions before the committee.”

David Scharfenberg: “When Donald Trump is gone — and someday, he will be gone — he’ll surely be remembered for all the ways he defiled American politics.”

“But if Trump’s ugliness will linger, it’s looking increasingly likely that another, more exalted legacy could surpass it. Look closely these past few weeks and you can see it taking shape.” ”

Donald Trump — the crass, cockeyed pirate of the Potomac — just might usher in the most meaningful epoch of American politics in a half-century.”

And not in a good way, kinda like Hitler being named Time’s Man of the Year.

New York Times: “Twitter is not the only means that Mr. Trump uses to communicate directly with his target audiences. He is also an eager caller to Capitol Hill, much more so than either of his two most recent predecessors. The constant contact is one reason that the president continues to defy predictions and retain strong Republican support, despite his often divisive public comments and unpredictable policy positions.”

A new ABC News/Ipsos poll finds Democrats and Republicans remain largely splintered on impeaching President Trump, even as nearly half of Americans show little movement on their support or opposition to the move.  Among those who read, saw or heard about Mueller’s testimony, 47% said it made no difference in their views about impeaching the president.

President Trump doubled down late Saturday and Sunday on his attacks against Rep. Elijah Cummings (D-MD) and his Baltimore congressional district, saying that it’s “sad” that the longtime congressman has done “so little” for the city he represents, The Hill reports.

Washington Post: “The racist outburst also undercut efforts by many Republicans over the past two weeks to defend Trump and insist that his earlier attacks were based in ideology rather than race.”

“But Trump’s advisers had concluded after the previous tweets that the overall message sent by such attacks is good for the president among his political base — resonating strongly with the white working-class voters he needs to win reelection in 2020.”

“While we would not sink to name-calling in the Trumpian manner — or ruefully point out that he failed to spell the congressman’s name correctly (it’s Cummings, not Cumming) — we would tell the most dishonest man to ever occupy the Oval Office, the mocker of war heroes, the gleeful grabber of women’s private parts, the serial bankrupter of businesses, the useful idiot of Vladimir Putin and the guy who insisted there are “good people” among murderous neo-Nazis that he’s still not fooling most Americans into believing he’s even slightly competent in his current post. Or that he possesses a scintilla of integrity. Better to have some vermin living in your neighborhood than to be one.”

Dan Balz: “Any president running for reelection with an unemployment rate of 3.7 percent, sustained economic growth and a record-breaking stock market would be a strong favorite to win a second term. President Trump is the exception.”

“Trump may yet win a second term, but his prospects continue to be dragged down by, well, the president himself. Is there any other way to explain the mismatch between the current economic conditions and the current mood of a divided electorate?”