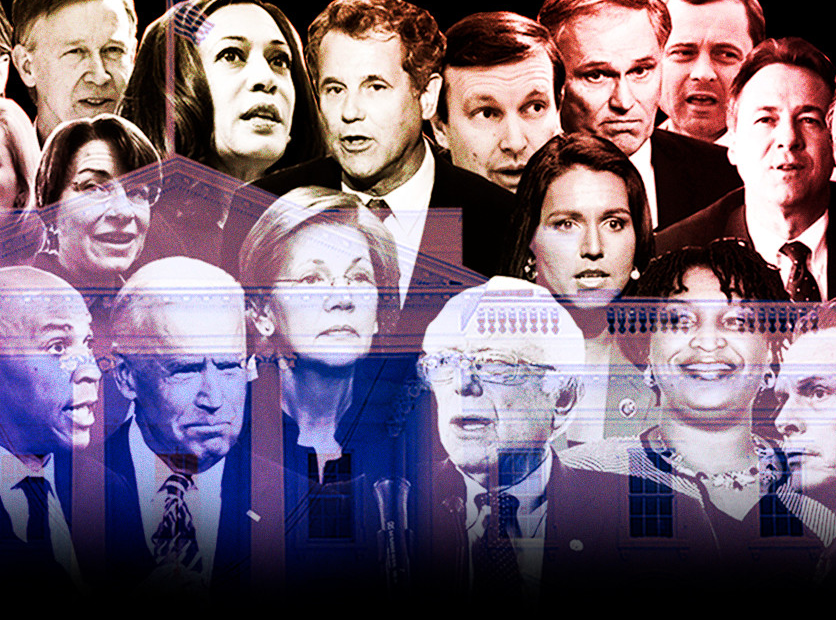 Said pollster Tim Malloy: “It’s a long 17 months to Election Day, but Joe Biden is ahead by landslide proportions.”

Aaron Blake: “These polls are beginning to paint a pretty unified picture of Trump’s current political standing as the 2020 race lurches to a start, and it’s decidedly not a strong one.”

Brian Beutler: “Ever since it became clear Joe Biden would seek the Democratic presidential nomination, politically active liberals have been engaged in internal dialogue over why he routinely asserts such a generous view of the very same Republicans who goosed birthers, sabotaged the Obama administration, abetted a foreign attack on the last presidential election, stole a Supreme Court seat, and have participated in a spree of political corruption, crime, institutional vandalism, and deceit over the last two and a half years.”

“These kinds of remarks fuel a bewildering debate, because nobody on either side of it wonders, even in passing, whether Biden might be right. It pits those who believe Biden is hopelessly stuck in a lost time against those who think he’s playing naive on purpose—because he thinks the quiet, offline masses want to believe this is all a phase or a bad dream.”

“But Trump likely needs something to change if he wants to win reelection.”

“The bottom line is this: Trump’s clearly in the hole right now against Biden. He’s in a worse position than he was before the election in 2016. It’s very unlikely that a polling error can explain away the deficit Trump faces right now versus his most likely opponent.”

Trump campaign pollster Tony Fabrizio wrote a memo about “expanding the map” to give President Trump “more options for getting the 270 electoral votes needed to win the re-election, where he mentions looking at Oregon,” CNN reports.

“In the memo, Fabrizio maintains that New Hampshire, New Mexico and Nevada — all states that Trump lost in 2016 — are now ‘highly competitive.’ Those are three states where the Trump campaign already has resources on the ground. Same goes for Minnesota, another state where Clinton beat Trump in 2016, but Fabrizio says to ‘keep an eye on’ this cycle.”

“Oregon, however, is no-man’s-land for the national GOP.”

The Kansas Democratic party submitted its plan to the Democratic National Committee to ditch Kansas’ traditional caucus system in favor of a primary election with ranked-choice voting, the Wichita Eagle reports.

Stuart Rothenberg: “A strong economy surely gives Trump good talking points and a rationale for re-election, but a clear plurality of Americans (maybe even a majority) now believe the country cannot take another four years of him, no matter how low the employment rate falls.”

“They are concerned about his character, judgment, intelligence, integrity, churlishness and lack of empathy, as well as the chaos and controversy that follow him.”

“Dozens of important questions remain unanswered, but the 2020 contest still looks to be more of a referendum on the president than anything else. And because of that, and the polarization evident in the nation, a close race is likely.”

“Given Trump’s inability to broaden his appeal and the likelihood that Democrats will be more united and energized than they were in 2016, the Democratic ticket deserves to be given a narrow but clear advantage.”

Daily Beast: “Priorities USA has put a $5 million investmentinto its analytics operation in hopes that it can more efficiently target need-to-reach voters at a fraction of the cost of traditional campaigning. Whereas in 2016, the super PAC had no one on staff doing in-house analytics, in 2018, it had a team of four.”

“Its projected staff will end up at 13 during the 2020 cycle, aides said, with four targeting analysts, three experiments analysts, four data scientists, and a director and coordinator.”

Savannah Guthrie, Lester Holt, Chuck Todd, Rachel Maddow and José Diaz-Balart will moderate the debate, which will take place in Miami over two nights on June 26-27.

A new Suffolk University/Boston Globe poll in Massachusetts finds Joe Biden leading the Democratic presidential race with 22%, followed by Sen. Elizabeth Warren at 10%, Pete Buttigieg at 8% and Sen. Bernie Sanders at 6%. Just over 40% of voters said they were still undecided.

New York Times: “After being briefed on a devastating 17-state poll conducted by his campaign pollster, Tony Fabrizio, Mr. Trump told aides to deny that his internal polling showed him trailing Mr. Biden in many of the states he needs to win, even though he is also trailing in public polls from key states like Texas, Michigan and Pennsylvania. And when top-line details of the polling leaked, including numbers showing the president lagging in a cluster of critical Rust Belt states, Mr. Trump instructed aides to say publicly that other data showed him doing well.”

“Mr. Biden seems to have gotten into the president’s head — at least for now. And on Tuesday, the president will engage with him, if indirectly, for the first time during the 2020 campaign when they both make appearances in Iowa.”

Rick Klein: “Both will be campaigning in Iowa, where the political topography will throw them into the same news cycle. It could be a split-screen moment — except the men on both sides of the screen can’t seem to stop talking about each other.”

“To Trump, there’s a comfort level to taking on Biden — along with the risk in elevating him among his 22 Democratic rivals. The insulting nicknames come easily to the president, who is confident he can define Biden much as he did Hillary and Bill Clinton.”

To Biden, there’s utility in taking on Trump instead of his fellow Democrats. His primary opponents want to engage the former vice president — and he has work to do with the progressive base — but Biden would prefer to fix his gaze beyond all that.”