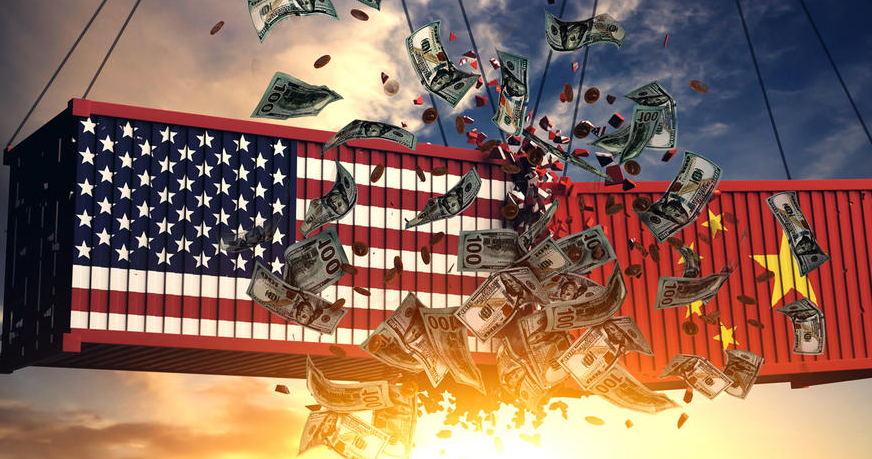 “President Trump escalated his trade war with China on Friday morning, raising tariffs on $200 billion worth of Chinese goods and taking steps to tax nearly all of China’s imports as punishment for what he said was Beijing’s attempt to ‘renegotiate’ a trade deal,” the New York Times reports.

“Mr. Trump’s decision to proceed with the tariff increase came after a pivotal round of trade talks in Washington on Thursday night failed to produce an agreement to forestall the higher levies. The White House said talks would resume again on Friday but it remains uncertain whether the two sides can bridge the differences that have arisen over the past week. … In a statement on Friday, China’s Ministry of Commerce said that the government ‘deeply regrets that it will have to take necessary countermeasures.’ It didn’t specify what those countermeasures might be.”

South China Morning Post: “If China was unwilling to play ball on Trump’s terms, Beijing, analysts said, not only could retaliate by imposing countervailing tariffs of its own, but it also has a range of financial arsenal power at its disposal to punish the US.”

“For starters, China could fire back by dumping its vast holdings of US government debt. Flooding the market with treasuries would push down US bond prices and cause the yields to spike. That would make it more costly for US companies and consumers to borrow, in turn depressing America’s economic growth.”

“Congress and Donald Trump’s fight over his financial records is now on the fast track,” CNN reports. “Judge Amit Mehta plans next week to weigh the major legal issues raised in President Trump’s challenge of a congressional subpoena for his accounting firm’s records, according to an order issued Thursday — putting the case on an even faster track than it previously looked to be.”

“Congress has subpoenaed Trump and his business’ accounting records from the firm Mazars USA, and Trump’s personal legal team sued to stop the records from being turned over. A hearing is now scheduled for May 14.”

Politico: “Democrats know that impeachment is a losing proposition against President Donald Trump right now. But there’s another rationale for launching impeachment that has some Democrats reconsidering the idea — getting access to the sensitive documents and testimony that Trump’s team is withholding.”

“Judges have repeatedly ruled that Congress has a greater claim to sensitive government documents and personal information when it can point to an ongoing legal matter, instead of just a congressional investigation or legislative debate. And impeachment would give lawmakers that legal matter — the process is essentially a court procedure run by Congress where the House brings charges and the Senate holds the trial.”

Rudy Giuliani “is encouraging Ukraine to wade further into sensitive political issues in the United States, seeking to push the incoming government in Kiev to press ahead with investigations that he hopes will benefit Mr. Trump,” the New York Times reports.

“One is the origin of the special counsel’s investigation into Russia’s interference in the 2016 election. The other is the involvement of former Vice President Joseph Biden’s son in a gas company owned by a Ukrainian oligarch.”

“Mr. Giuliani’s plans create the remarkable scene of a lawyer for the president of the United States pressing a foreign government to pursue investigations that Mr. Trump’s allies hope could help him in his re-election campaign.”

House Judiciary Committee Chairman Jerrold Nadler (D-N) said that special counsel Robert Mueller will not be testifying before his panel next week, The Hill reports. “Nadler told reporters that the committee is still negotiating over his testimony with the Justice Department and Mueller but expects him to appear. Said Nadler: “He will come at some point. If it’s necessary, we will subpoena him.”

Nadler, fuck the negotiations. Barr and the DOJ are not acting in good faith. Subpoena him and go to court. Now. Here, read this: The Congressional Research Service put out a report two years ago on Congress’ “inherent contempt power.”

Jonathan Bernstein: “While presidents are almost always the most public face of the policies they support, most will try to find allies that allow them to depersonalize things to some extent. Normal presidents love having bipartisan support; if that’s unavailable, they’ll at least fall back on their parties. Trump is out there alone on topic after topic, from his border wall to Yemen. On trade, he’s especially isolated. Yes, he’s brought a handful of Republicans with him, and on China in particular he may have a few added allies. But overall, Trump’s trade wars are going to result in some unusually personal successes or failures.”

“Even under the best of circumstances, this would be a very delicate issue for a president. Expanded trade tends to produce overall gains for the economy at the expense of losses in specific sectors. That’s dangerous enough, since visible losses can be politically potent. But starting a trade war not only imposes specific losses when other countries retaliate, it also risks serious damage to the broader economy. That’s a whole lot of risk for a president with very little potential reward.”

Los Angeles Times: “In 2016, Donald Trump stormed Washington and swept aside a hostile Republican Party establishment. Now, as he seeks reelection, the president has tightened his grip on the GOP as loyalists — whose main credential is fealty to the White House — seize control of state parties around the country.”

“Trump acolytes have replaced veterans and party insiders in places such as Michigan, Ohio and Pennsylvania, which were crucial to his election, the perennial swing state of Florida, as well as New Hampshire, which holds the first presidential primary.”

“Here in Arizona, an emerging 2020 battleground, the new party chief is Kelli Ward, a former state lawmaker, fierce Trump devotee and twice-failed candidate for U.S. Senate who campaigned against fellow Republicans the way a battering ram meets a brick wall.”

“The Senate Intelligence Committee’s decision to subpoena Donald Trump Jr. opened up a rift among Republicans, as some questioned the necessity of the GOP chairman’s request and others called for the investigation to continue unimpeded,” the Wall Street Journal reports.

“Scrutiny settled Thursday on committee chairman Sen. Richard Burr (R-NC), who often has taken a more bipartisan approach toward probing President Trump than some of his fellow Republicans.”

Washington Post: “The sudden infighting threatened to undermine support for the Senate’s Russia investigation, which is the sole bipartisan probe in Congress into Russian interference in the 2016 election and has been widely praised as operating with little public drama.”

House Ways and Means Chairman Richard Neal (D-MA) issued subpoenas on Friday to Treasury Secretary Steven Mnuchin and IRS Commissioner Charles Rettig for the last six years of President Trump’s business and personal tax returns. The subpoenas were issued after previous requests by Neal for the tax returns — under an obscure law that allows the IRS to produce any taxpayer’s returns if requested by Congress — were declined by the Trump administration.

Karen Tumulty: “President Trump has finally proved, beyond any doubt, that there is such a thing as #FakeNews.” “In the 1980s and 1990s, the media conspired to perpetrate a vast fraud on the American people. So-called journalists and their complicit editors colluded — yes, that’s the word — to convince an unwitting public that Trump was a spectacularly successful businessman.”

“The scale of the ink-fueled myth has been exposed at last, thanks to 10 years’ worth of his tax information obtained by the New York Times, which revealed Trump’s enterprises were flopping on an epic scale.”

Mike Allen: “If Trump allows Democrats to rummage through notes and witnesses, he risks new material surfacing that piles on top of the Mueller report, triggering impeachment.” “If Trump refuses all cooperation with Congress, Democrats increasingly see the opportunity to try to impeach him.”

NBC News: “The three new missiles North Korean leader Kim Jong Un has tested over the past week are eerily familiar to military experts: They look just like a controversial and widely copied missile the Russian military has deployed to Syria and has been actively trying to sell abroad for years.”

President Trump intends to nominate Pat Shanahan to become his next secretary of defense, moving to formally fill the post that Mr. Shanahan has held in an acting capacity since January, the Wall Street Journal reports.

“The Department of Housing and Urban Development acknowledged that a Trump administration plan to purge undocumented immigrants from public housing could displace more than 55,000 children, all of whom are legal U.S. residents or citizens,” the Washington Post reports.

“The proposed rule, published Friday in the Federal Register, would tighten regulations against undocumented immigrants accessing federally subsidized housing to ‘make certain our scarce public resources help those who are legally entitled to it,’ HUD Secretary Ben Carson said last month. But the agency’s analysis of the rule’s regulatory impact concluded that half of current residents living in households potentially facing eviction and homelessness are children who are legally qualified for aid.”

Here’s the kicker: “Restricting those subsidies to families in which all members are legal U.S. residents would cost an additional $193 million to $227 million a year because entire families would receive higher subsidies.”

“An investigation into Rep. Matt Gaetz (R-FL) will proceed, the Florida Bar said Wednesday, meaning the Panhandle Republican could face discipline for allegedly intimidating President Trump’s former lawyer Michael Cohen,” the Tampa Bay Times reports. “If the Florida Bar had determined in its initial review that discipline was not warranted, then the case would have stopped. But it has not, meaning the Bar has decided that further investigation is needed.”