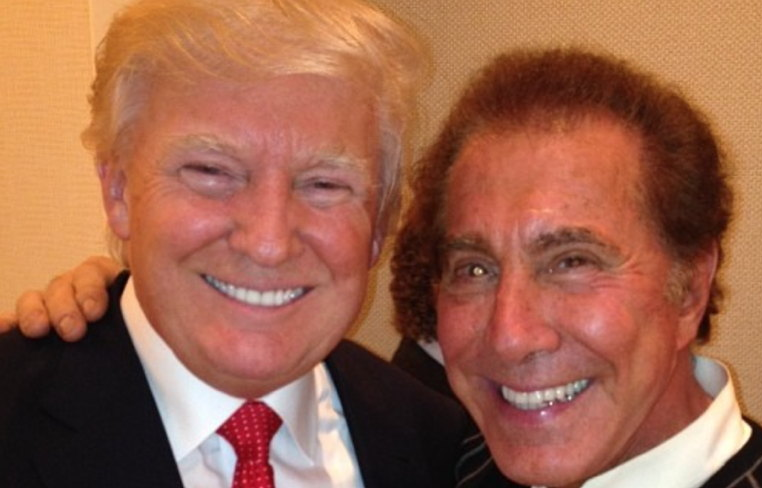 Axios: “The RNC was facing backlash for not taking immediate action after the Wall Street Journal noted dozens of allegations against Wynn for sexual harassment and assault. Criticism was heightened because Republicans had called for the DNC to return donations made by Harvey Weinstein after he was accused of sexual assault and harassment.”

TRUMP DEMANDS THAT TRUMP RELEASE THE MEMO. “On Wednesday, as Republicans were clamoring to make public a secret document that they think will undercut the investigation into Russian meddling, President Trump made clear his desire: release the memo,” the Washington Post reports.

“Trump’s directive was at odds with his own Justice Department, which had warned that releasing the classified memo written by congressional Republicans would be ‘extraordinarily reckless’ without an official review.”

”Trump and his Republican allies have placed special emphasis on the classified memo, which was written by staff for House Intelligence Committee chairman Rep. Devin Nunes (R-CA) and suggests that the FBI may have relied on politically motivated or questionable sources to justify its request for a secret surveillance warrant in the investigation’s early phase. Democrats have characterized the memo as misleading talking points designed to smear the FBI and said it inaccurately summarizes investigative materials that are also classified.”

No, there is no Trump economic boom: https://t.co/Hlkojxu54Z

TRUMP WON’T VISIT UK UNLESS PROTESTS ARE BANNED. President Trump is refusing to visit the UK unless Theresa May can ensure that he is not met with protests, the International Business Times reports. “May told the US president that that was how the UK media operated and she could do little to change it. Trump went on to say that he would not visit the UK unless there were guarantees that he would not be met with protests.”

MORE WOMEN RUNNING THAN EVER BEFORE. NBC News: “They’re on track to break almost every record on the books. As of last week, 325 women were non-incumbent candidates for the United States House, along with 72 female members seeking reelection, according to data compiled by Walsh’s organization. Thirty-eight women not currently serving in the United States Senate are aiming for the upper chamber, along with 12 incumbents running again. And 75 women have set their sights on the nation’s governorships — plus four female incumbents fighting to keep their seats.”

“In 2016, a high water mark for female candidates overall, there were 167 female major party nominees for the United States House and 16 for the Senate — well fewer than half the number of candidates vying for one of those spots now.”

IF IT LOOKS AND SOUNDS LIKE OBSTRUCTION…. Jeffrey Toobin: “Mueller and his team surely have evidence on obstruction of justice that has not yet been made public. But even on the available evidence, Trump’s position looks perilous indeed. The portrait is of a President using every resource at his disposal to shut down an investigation—of Trump himself. And now it has become clear that Trump’s own White House counsel rebelled at the President’s rationale for his actions.”

“Abundant questions remain about Trump’s fate in the Mueller investigation. Can or will a sitting President be indicted? What, if anything, will the House of Representatives do with respect to its impeachment powers? In what forum and format will the public see the full range of the evidence against the President? But on perhaps the most important question of all—whether the President of the United States committed the crime of obstruction of justice—the answer now seems clear.”

REPUBLICANS WILL GO DOWN WITH THE SHIP.  Joe Scarborough: “We learned this week that President Trump in June ordered the firing of special counsel Robert S. Mueller III, but few Republicans on Capitol Hill bothered to raise an eyebrow. In more settled times, this kind of presidential assault on an independent investigation would have stirred grave concerns throughout the halls of Congress. But Trump’s corrupted coalition has instead trotted out one twisted conspiracy theory after another, all designed to distract the president’s most fevered fans and concoct a case against Mueller’s investigation.”

“Wild tales of secret societies, Obama wiretaps and ‘deep-state’ conspiracies flow freely from the tongues of Trump apparatchiks. Those preposterous narratives are then spread across cable news networks and inside Capitol Hill cloakrooms.”

It is fragile and uncertain, with no guarantees the benefits will be any more equal than before, but the global economy is expanding more than anytime since financial crisis. My story https://t.co/M8EK5BT22f

DEMS TO BRING DREAMERS TO THE SOTU. Democratic Minority Leader Nancy Pelosi and more than two dozen House members “will fill the balcony with so-called Dreamers and other immigrants” at Donald Trump’s State of the Union address next week. The announcement comes as the White House has announced President Stephen Miller’s “immigration plan” demanding a white supremacist wish list in exchange for Dreamers.

REPUBLICAN IN TROUBLE IN UTAH.  A new Salt Lake Tribune-Hinckley Institute of Politics poll shows Rep. Mia Love (R) with a small 5-point edge over Salt Lake County Mayor Ben McAdams (D), 47% to 42%, “a slightly narrower lead than she had three months ago and just outside of the margin of error of plus or minus 4.9 percentage points.”  Key factor: “While 48% of voters statewide approve of Trump’s job performance, just 42% do in the 4th congressional district — and 56% disapprove. So neither Love nor McAdams will be successful by cuddling up to the president.”

WHY THE ‘TRUMP FIRING MUELLER IN JUNE 2017’ BOMBSHELL NOW? On June 12, 2017, Newsmax CEO told PBS that he thought President Trump was “considering perhaps terminating the special counsel. I think he’s weighing that option.” On the same day, political analyst April Ryan told CNN there was “mass hysteria” in the White House over the president possibly firing Mueller.

Why is the story back?

Bill Kristol speculates that White House counsel Don McGahn believes Trump may soon try to fire Mueller again: “Unless the story came out now by accident, the sources (McGahn and allies) are probably worried Trump is about to try again to fire Mueller, and wanted to stir up a preemptive push back.”

He adds: “Why would Trump have returned to the idea of firing Mueller now? He may recently have learned how much Mueller now knows. He also soon has to agree to be interviewed or not, may have decided not, and thinks firing might be better than refusing to talk and/or taking the fifth.”

So this week I traveled to five of the counties that supported Clinton the most overwhelmingly to see how voters there felt about their votes — and about Trump. https://t.co/poGtLga40x

THREATENING TO QUIT IS HOW TO CONTROL TRUMP.  Tarini Parti and Henry Gomez see a pattern developing in this White House.  “In a White House that has bounced from crisis to crisis and jettisoned a record number of high-level staff during President Donald Trump’s first year, top administration officials seem to have found a way to prevent the rashest of decisions: by threatening to quit.

Most conservatives have decided to argue that Trump's coverup doesn't matter because the crime was merely treasonous https://t.co/SQkGyOpOHa

Dana Milbank takes us inside “the secret, sinister and very illegal cabal trying to destroy Trump.” I’ll give you a taste that will hopefully inspire you to go read the whole thing.

“I have obtained, at great personal risk, the following leaked minutes from the society’s meeting on Inauguration Day last year:

Society for Harassing and Impeaching Trump with Hearsay, Outrageous Lies and Extralegal Schemes…

The meeting was called to order at noon. Society officers greeted each other with the secret fist bump, recited the secret Pledge of Allegiance to Saul Alinsky, and then knelt for the national anthem, sung by an illegal immigrant…

The steering committee presented its Inauguration Day recommendations in a report titled “Underhanded and Conspiratorial Things We Can Do to Make Trump Look Bad.”

The society would use its contacts to convince Trump that he was the victim of massive voter fraud and that President Barack Obama personally ran a wiretap on him. This would make Trump sound paranoid.

The society would use its influence to convince Trump that Frederick Douglass is still alive and that Andrew Jackson was involved in the Civil War. This would make Trump sound dumb…

The society would convince Trump to say kind things about white supremacists, and to use a filthy word to describe African countries. This would make Trump sound like a racist.

The society, finally, would convince Trump to fire an FBI director, hire a guy named “Mooch” and declare himself a “stable genius.” This would make it clear he was neither.”

Jennifer Rubin: “Fifth, this underscores how irresponsible Republicans have been in failing to shore up protections for the special counsel. Next time, McGahn may not be there or be able to head off an order to fire Mueller when Trump loses his cool. Republicans — for the president’s own protection — need to bring up legislation allowing notice of a decision to fire Mueller and/or some procedural recourse if Trump does pull the trigger. “While credit goes to Don McGahn, this is a blaring alarm: if there was ever any doubt in any Republican leader’s mind that Trump is willing to subvert the rule of law, that is now gone,” says Ian Bassin, who heads the nonpartisan group Protect Democracy. “The question now for Speaker of the House Paul Ryan, Senate Leader Mitch McConnell and their caucuses is whether they truly believe we are a nation of laws and not of men and what they’re willing to do to assure that.” Unfortunately, from indulging the antics of House Intelligence Committee Chairman Devin Nunes (R-Calif.) to refusing to set up a select committee, GOP congressional leaders seem to have already answered the question.”