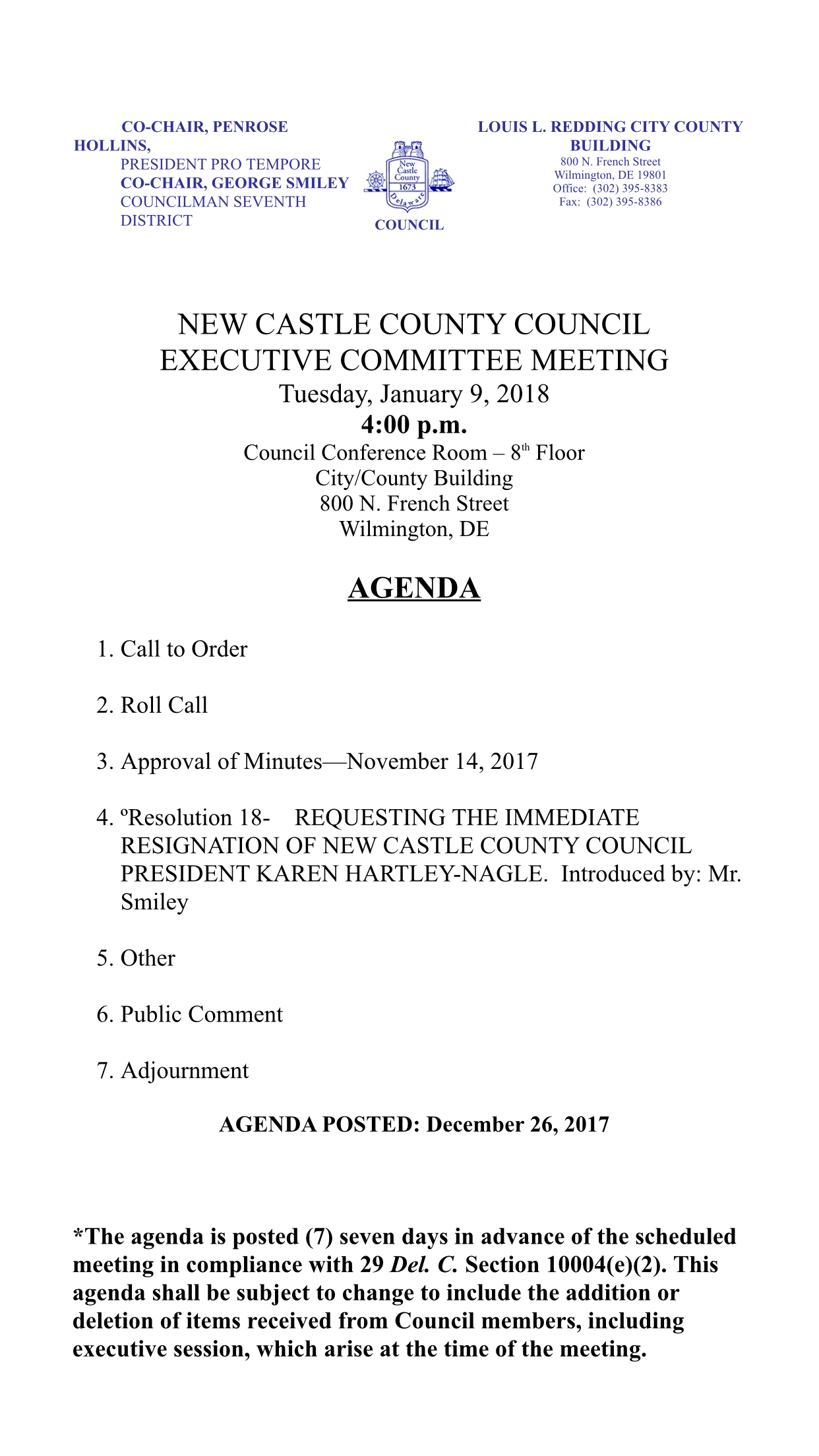 New Castle County Councilman George Smiley has officially called for the immediate resignation of Council President Karen Hartley-Nagle in an upcoming resolution. The Executive Committee agenda (above) for January 9, at 4:00 pm, features this resolution for discussion. This brings us to the topic at hand. Where is our bench? Who is in the bullpen? Looking now, there are no viable options, only the old tired regulars who hang around the periphery of NCC County government (e.g., Bill Dunn, Dave Carter, Mike Protack, Mark. Blake, etc.). Where is the new blood? Where are the fresh faces?

First and foremost we need to address the current problem. Karen Hartley-Nagle (KHN) must go! There is no turning the ship around, or plotting a course correction. She is totally and utterly incapable of change. It is blatantly o virus to anyone who has ever been around her, or seen her in action. Her long burning lust for elected office had nothing to do with her desire for public service. Her goal was Power, or rather perceived power and the trappings of an elected position. Her sole purpose was to have the office, not the position. Let’s be clear, NCC Council President is not the leader of Council. It is, essentially, an at large member. The President gets one vote, like every other member. The only “power” comes from the holder’s ability to run the meetings and negotiate the peace between members. There are some minor supervisory functions within Council that fall to the president,  but these are merely due to lack of individual district work.  These functions, however, have been stripped from KHN because she shows no interest at best, contempt at worst for these functions.

Her interest lies in the perceived authority her office and duties have over people and the “perks” that come with it. The problem is that there are no perks, nor is there any real power. At least there is none for her. Many previous occupants of that role were able to create a sense of authority because they had the skills to lead, the personality to persuade, or the intellect to problem solve.  KHN has none of these traits, nor will she ever develop them. It is too late. She is a parasite that just takes, but never gives back. This is evident in not only how she performs her job, but how she conducts her life. The fact that she took and acknowledged a $60,000 loan from Patrick Jones and then told him that she would not repay it says a great deal about who she is at her core. She is a taker; a free-rider; a grifter. KHN is an enigma that has slipped into office because of a perfect concurrence of circumstances that allowed her to succeed due to voter neglect, or ignorance.

This is where NCC voters can help correct their error of negligence. While we have no ability to recall or impeach an elected municipal official, our voice can be heard. As much as she will try to cling to every vestige of the little Power she has, no one can survive the pressure of a determined electorate who calls continuously and in unity for her resignation. January 9 is the opportunity. We need to support George Smiley through calls to your Council member and by showing up to the Executive Committee and Council meeting that evening to demand her resignation in chorus.

Should she decide, for once, to finally do a public service and resign, then we can turn our attentions to the bigger issue. Creating a stable of young, intelligent, public service minded individuals (looking at you Mat Marshall, Cassandra Marshall, Jordan Seemans, Joe Daigle, Bryan Gordon, etc.) to refesh the future of County Government and ensure this lapse of judgement does not occur again.