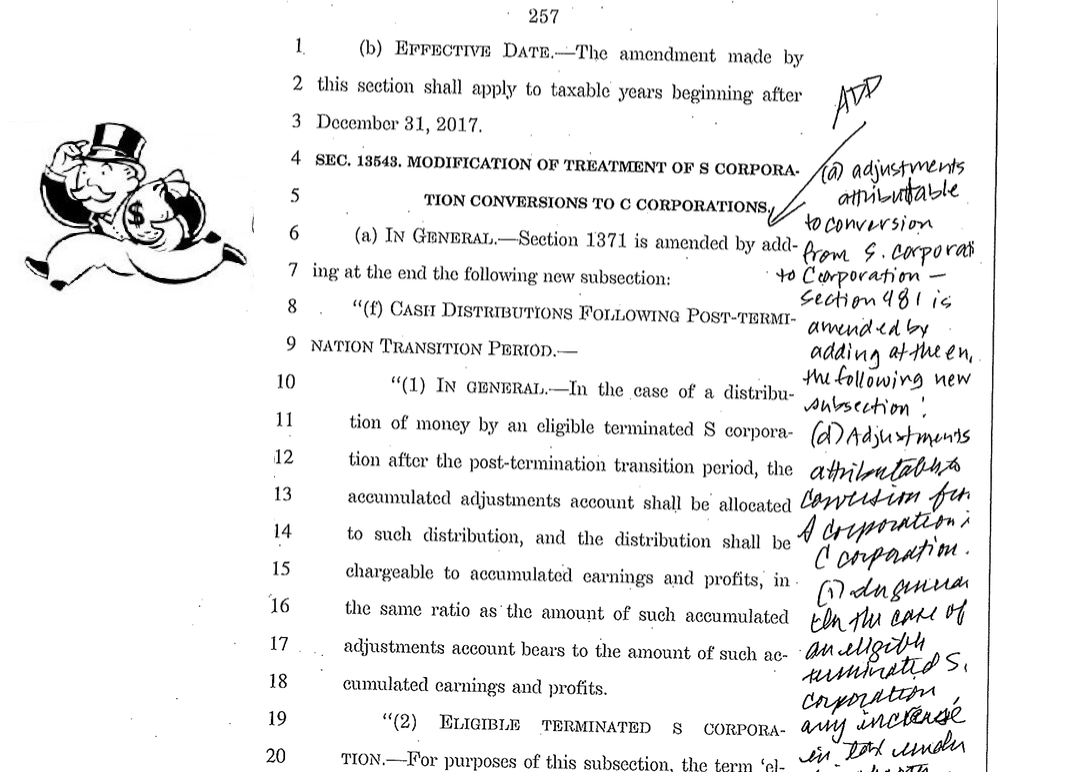 REPUBLICAN DONOR RELIEF BILL PASSES.   The Senate Republicans passed their looting bill that cuts healthcare and raises taxes on the middle class and poor in order to give a massive tax cut to corporations and the wealthy.  The vote took place in a cloak of darkness the color of Republican hearts, after midnight this morning.  The vote was 51-49.  Sen. Bob Corker (R-TN) was the lone Republican in opposition. He objected to the increase in the deficit every analysis of the bill has predicted.

The bill now theoretically will head to a conference committee to mesh it with the House bill. Or the House will just try to save time by passing the Senate bill.

Neither bill is popular.

FLYNN FLIPS, IMPLICATES TRUMP IN TREASON.   ABC News: “Flynn’s plea signals the former top adviser to President Trump is now cooperating with Special Counsel Robert Mueller’s team. A brief statement released by Mueller’s team Friday morning does not say what information Flynn has provided the government as part of the deal, but people familiar with the agreement told ABC News Friday he has made a decision to assist investigators.”

“The general told confidants about his decision to plead guilty in the last 24 hours, according to people close to Flynn, who say the former adviser feels President Trump has abandoned him and has agreed to answer questions about the president or anyone else.”

Perhaps most important, Brian Ross reports that Flynn is prepared to testify that Trump “directed him to make contact with the Russians.”

NEW: Flynn "turned on me," Trump fumed. Inside White House's Flynn panic, by @lachlan & @swin24 superteam, with assists from @JFKucinich @samstein & me. https://t.co/vdXEdHGV96

Politico: “Trump told associates as recently as last weekend — while he was visiting his Mar-a-Lago resort for Thanksgiving — that he isn’t worried about the outcome of Mueller’s probe into Russian meddling in the 2016 election, which has grown to encompass his response to the investigation.”

“But there is a growing sense of dread among Trump’s closest confidants that the noose is tightening — if not around the president, then around his closest advisers and family members.”

Said one person close to the White House: “What they’re freaked out about is that there are no leaks. Papadopoulos didn’t leak. Flynn didn’t leak. They feel like they can’t trust anyone. Their own counsel didn’t know.”

Lawfare has a “quick and dirty” analysis of the Flynn plea.

KUSHNER TOO.  “Former national security adviser Michael Flynn’s guilty plea Friday for lying to the FBI is alarming news for Donald Trump. But the first person it’s likely to jeopardize will be the president’s son-in-law, Jared Kushner,” Bloomberg reports.

“Two former officials with the Trump transition team who worked closely with Flynn say that during the last days of the Obama administration, the retired general was instructed to contact foreign ambassadors and foreign ministers of countries on the U.N. Security Council, ahead of a vote condemning Israeli settlements. Flynn was told to try to get them to delay that vote until after Barack Obama had left office, or oppose the resolution altogether.”

Zooming out a bit, the Trump tax cuts show how the authoritarian-libertarian alliance runs the Republican party https://t.co/ljmt9Hg6Im pic.twitter.com/LeLxHcRMxY

EARNED BENEFITS LIKE SOCIAL SECURITY AND MEDICARE WILL BE ENDED NEXT.  Sam Baker: “Republicans have been asking themselves what they’ll turn to next, after their tax overhaul wraps up. If they repeal the Affordable Care Act’s individual mandate, there’s a good chance the answer will be health care — whether they like it or not.”  “President Trump has said several times that he wants to take another crack at repeal-and-replace after the tax bill. GOP leaders in the House and Senate have not echoed that plan. But if Republicans do end up repealing the individual mandate, Insurance markets will begin to feel the effects quickly, leading to almost immediate nationwide upheaval that will be impossible to ignore — especially in an election year.”

Politico: “Republicans are on the verge of a massive tax overhaul that would hand President Trump his first major legislative victory. But the $1.5 trillion tax package could trigger eye-popping cuts to a slew of federal programs, including Medicare. Unless Congress acts swiftly to stop it, as much as $150 billion per year would be cut from initiatives ranging from farm subsidies to student loans to support services for crime victims. Medicare alone could see cuts of $25 billion a year. And the specter of those cuts has thrust Congress into a high-stakes game of political chicken.”

“With so much attention focused on the tax bill itself neither lawmakers nor many of the advocacy groups had paid as much attention to the depth and breadth of the cuts that will ensue unless the House and Senate come up with a bipartisan deal to stop them. Some groups had run Medicare ads, but they were largely overshadowed by the tax debate itself.”

AND OF COURSE, GUNS!  GUNS FOR ALL.  “House Republican leaders are preparing to move ahead with a package of gun legislation that would sharply expand concealed-carry rights but also address policies that came into play during two recent mass shootings,” Politico reports.

“The proposal is expected to come to the floor as soon as next week.”  “GOP leaders conducted a full whip count of the plan Thursday and sensed enough support from colleagues to bring up the measure, a combination of three proposals that would include a major policy win for gun rights advocates but also seek to placate those clamoring for policy changes following two of the worst shooting massacres in American history — in Las Vegas and Sutherland Springs, Texas.”

TRUMP THINKS A SHUTDOWN IS GOOD FOR HIM.   President Trump “has concluded that a government shutdown might be good for him politically and is focusing on his hard-line immigration stance as a way to win back supporters unhappy with his outreach to Democrats this fall,” the Washington Post reports.

“Over the past 10 days, the president has also told advisers that it is important that he is seen as tough on immigration and getting money for a wall along the U.S.-Mexico border… He has asked friends about how a shutdown would affect him politically and has told several people he would put the blame on the Democrats.”

“Trump’s mixed messages on a partial government shutdown is hampering the ability of congressional Republicans to negotiate with Democrats, whose support they need to pass spending legislation in coming weeks. Many Republicans said this week that a shutdown is an unwelcome possibility they hope to avoid.”

MORE OBSTRUCTION OF JUSTICE. “President Trump over the summer repeatedly urged senior Senate Republicans, including the chairman of the Senate Intelligence Committee, to end the panel’s investigation into Russia’s interference in the 2016 election,” the New York Times reports.

“Mr. Trump’s requests were a highly unusual intervention from a president into a legislative inquiry involving his family and close aides.”

AMERICA IS TRAPPED IN TRUMP’S DELUSIONS.  Andrew Sullivan: “This past week was, in some ways, the most potent distillation of the Trump era we have yet encountered. This is not because any single incident is worse than any previous one over the past year. It’s because the last few days have brought all of them together in a new, concentrated way — a super-storm, as it were, of liberal democratic destruction.”

“We have deranged tweeting; truly surreal lies; mindless GOP tribalism; evangelicals making excuses for the molestation of minors; further assaults on the free press; an unprecedented attack on the most reliable Atlantic ally; the demonization of personal enemies; stupendous tribal hypocrisy with respect to sexual abuse; the White House’s endorsement of a foreign neo-fascist hate group; the vengeful hanging out to dry of a Cabinet member; and the attempt to pass a catastrophic omnibus piece of legislation in one mad, blind rush in order to get a ‘win.’ And all in a few days!”

“Give such a man the power and trappings of the most powerful office on earth, give him a few months, and such delusions will get worse. Sane men and women are corrupted by the wielding of power; a psychologically disturbed figure from the get-go will degenerate into deeper and deeper forms of madness.”

Here’s a full list of the sexual assaults Trump’s committed-that we know of. It could fill a book, there’s so many. #TrumpSexProbe https://t.co/S7YFgEqHMv

“As chairman of the House Select Committee on Benghazi, Rep. Trey Gowdy (R-SC) used $150,000 in taxpayer dollars to settle with a former aide who alleged he was fired in part because he was not willing to focus his investigative work on Hillary Clinton,” the Washington Post reports.

“There is no one I would love to fight more than you. I will put my Christian values aside just for you, and for that fight. So, if you are challenging me to a fight, here’s what we’ll do: Let’s find a place to do it, I’ll wear a Girl Scout uniform so you can have something to get excited about, and the winner—whoever wins the fight—will give all the money we charge for the tickets to charity. My charity will be the women who came forward to say you molested them. All right, tough guy with your little pistol?”

The right is no longer using only terrorism as a justification for anti-Muslim sentiments, writes @PeterBeinart https://t.co/bZu7qGVRCl pic.twitter.com/CM2UtfTjDW