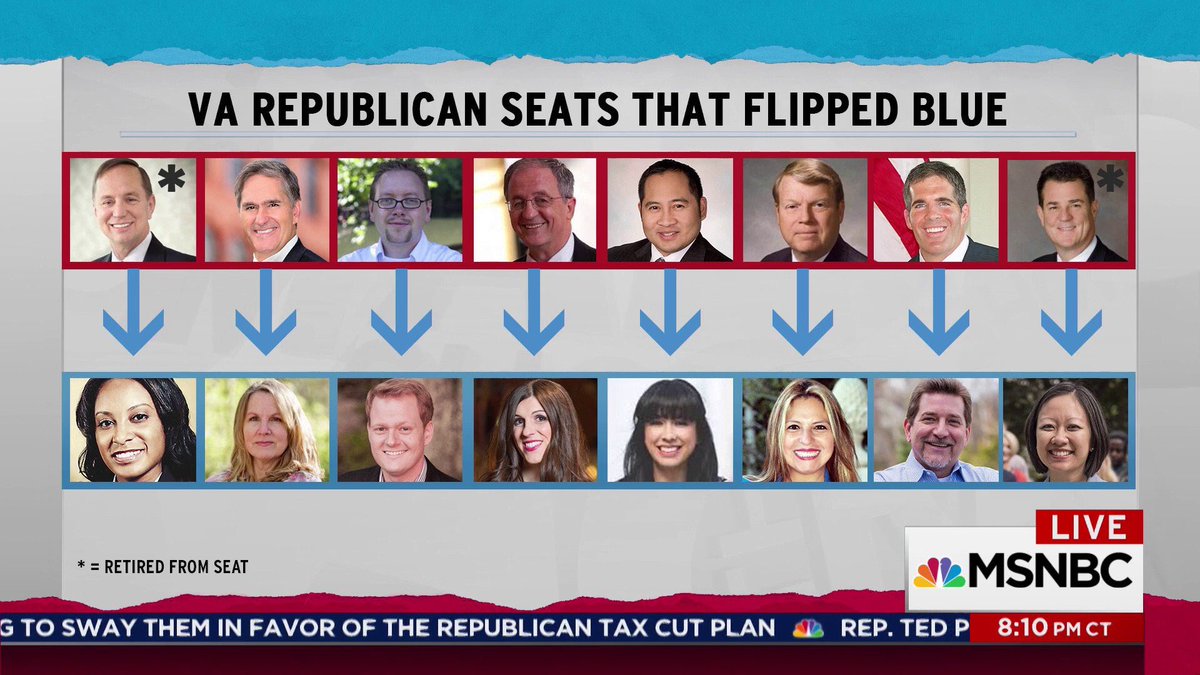 “The White House was in damage control mode on Wednesday as it sought to deflect blame for Tuesday night’s sweeping electoral losses and reassure Republicans who fear President Trump’s unpopularity will cost them at the polls in 2018,” The Hill reports.

“A person familiar with the president’s political operation dismissed the notion that an anti-Trump wave is building, arguing that Democrats had merely held on in states they were expected to win. New Jersey is a deep blue state and Virginia has gone for the Democrat in the last three presidential elections.”

New York Times: “The American suburbs appear to be in revolt against President Trump after a muscular coalition of college-educated voters and racial and ethnic minorities on Tuesday dealt the Republican Party a thumping rejection and propelled a diverse class of Democrats into office.”

“From the tax-obsessed suburbs of New York City to high-tech neighborhoods outside Seattle to the sprawling, polyglot developments of Fairfax and Prince William County, Va., voters shunned Republicans up and down the ballot in off-year elections. Leaders in both parties said the elections amounted to an earsplitting alarm bell for Republicans ahead of the 2018 elections, when the party’s grip on the House of Representatives may hinge on the socially moderate, multiethnic communities surrounding major cities.”

James Hohamnn: “Tuesday was the best day for Democrats politically since Barack Obama won reelection in 2012. Remember, conservatives scored significant victories in the November 2014, 2015 and 2016 elections. Democrats desperately needed some wins after they went all-in on a House special election in Georgia this spring and lost. Last night, they got them.”

“Voters came out in droves. They braved the rain and the cold to send a message to President Trump. The results across the country represent nothing less than a stinging repudiation of Trump on the first anniversary of his election.”

Last night was a sign that Trumpism without Trump is a total dud, via @brianbeutler: https://t.co/ydTjo6XbYG

Nate Silver: “While Tuesday’s results may not change the reality of the 2018 outlook all that much, it could change perceptions about it, and that could have some knock-on effects. (Politicians are often like Morning Joe panelists in how they think about elections.) Republicans’ retirement issues may get even worse; Democrats’ recruiting may get even better. Republicans might think twice about how they’re proceeding on tax reform — especially given that their current plans could have negative effects on just the sorts of wealthy coastal suburbs where Republicans performed poorly on Tuesday.”

“And there will be lots of recriminations about the race that Ed Gillespie ran in Virginia, which could change Republicans’ thinking on how they should relate to Trump. Some of this is going to be silly: Gillespie did no worse (and no better) than you’d expect given Trump’s approval rating and Virginia’s blue lean. But if those politicians think Tuesday was a huge game-changing deal, they may begin to act like it and create a self-fulfilling prophecy.”

“He doesn’t have a loyalty to any certain policy. He has a loyalty to hearing the crowd roar.” @KatyTurNBC & @karaswisher — if you can stand another one, this is a wicked smart election postmortem https://t.co/JaTsaN0rP4

Slate: “The biggest political story of the hour is that Republican gubernatorial candidate Ed Gillespie went down big in Virginia after running a Trump-esque campaign fixated on inflammatory culture-war issues, losing to Democrat Ralph Northam by what looks like it will end up as a nine-point margin. It’s the biggest story of the hour, that is, unless you’re watching Fox News: As observed by political writer Chris Hooks, Donald Trump’s favorite network spent more than 90 minutes in prime time on Tuesday—Election Night!—between discussions of election results.”

the best description i have for this piece is it is a story of people who are addicted to white supremacy https://t.co/P8cb1achx8

Josh Marshall:  “When a President is locked below 40% approval and often closer to 35% approval, his party will face a brutal and unforgiving electorate. This was a fact a decade ago and it’s a fact today. We’ve just been stunned into an unwarranted uncertainty by the fact of Trump’s victory one year ago today. The so-called congressional generic ballot is running near 10 points in the Democrats’ favor at the moment. Again, that kind of margin will produce a punishing result for the party on the short end of the stick. It’s a similar kind of rule.

The best argument against this reasoning, for President Trump, if not for Republicans trying to imitate him, is that Trump was quite unpopular throughout 2016 too. Indeed, his “favorability” ratings were not that different from what his approval ratings are today. But that’s deceiving. “Favorability” and “approval” are often treated as rough analogs – one for candidates and another for incumbents. They’re not. One is general likability and the other is about actual approval of actions in office. They’re not the same. The biggest difference for non-presidential elections, though, is that the President stands alone. It’s not a this person versus that person situation in which the incumbent can try both to improve their numbers and knock down the opponents. They stand alone. It’s a referendum on that person. As your parents might have said to you in tense moments as a child, it’s not about them. It’s about you.”

“A New Jersey politician who shared a meme on Facebook during January’s Women’s March in Washington asking whether the protest would be ‘over in time for them to cook dinner’ is eating his words,” the AP reports. “A woman who was angered by Republican John Carman’s remarks on Tuesday defeated his bid for a second term as an Atlantic County freeholder.”

The Senate won’t release its version of the GOP tax bill tomorrow as previously announced by Senate Majority Leader Mitch McConnell, Axios reports.  “Both chambers are on very tight timelines and trying to strike very difficult policy balances. Delaying introduction of the bill not only gives off the impression that things aren’t going well (whether it’s true or not), but also removes one more day that could have been spent getting the caucus on board with the bill.”

Alex Shepard: “Democrats started Tuesday in a fight about what kind of Democrat can win. The answer to that question, judging by Tuesday’s results, is any Democrat.

There was a palpable enthusiasm gap in Virginia, and across the country, on Tuesday. Gillespie won many of the same areas as Trump by similar percentages, but he garnered significantly fewer votes. Northam, meanwhile, crushed it in areas where Democrats are concentrated, outperforming Hillary Clinton with young people and even women. The bottom line: Democrats are more motivated than they were in 2016; Republicans are less motivated.

[T]he race in Virginia wasn’t just a rebuke of Donald Trump. It was a rebuke of the entire Republican Party. Voters clearly rejected Gillespie’s adoption of Trump/Bannon politics, particularly his attempt to turn immigration and Confederate monuments into a wedge. It certainly didn’t drive turnout in the rural areas that Trump won, and may have depressed turnout in the suburbs of Northern Virginia.

But exit polling suggests that health care, an issue that barely came up in the gubernatorial race, was the number one issue for four of ten voters. That’s a big problem for Republicans, who have repeatedly tried to repeal Obamacare in the past year. Republicans have since raced forward with a deeply unpopular corporate tax cut under the assumption that they, like Gillespie, can exploit identity politics in the 2018 midterm elections. The results in Virginia suggest this strategy isn’t very effective.”

I said it before and I will say it again: The Democratic Party will survive the election of Trump, but the Republican Party will not. By the time he leaves office, they will wish Hillary Clinton had won…if they don't wish it already. https://t.co/ByJELYzcXz #ThankYouHillary pic.twitter.com/XxOmWSn3HD

Jonathan Chait: “Imagine what the political world would look like for Republicans had Hillary Clinton won the election. Clinton had dragged her dispirited base to the polls by promising a far more liberal domestic agenda than Barack Obama had delivered, but she would have had no means to enact it. As the first president in 28 years to take office without the benefit of a Congress in her own party’s hands, she’d have been staring at a dead-on-arrival legislative agenda, all the low-hanging executive orders having already been picked by her predecessor, and years of scandalmongering hearings already teed up. The morale of the Democratic base, which had barely tolerated the compromises of the Obama era and already fallen into mutual recriminations by 2016, would have disintegrated altogether. The 2018 midterms would be a Republican bloodbath, with a Senate map promising enormous gains to the Republican Party, which would go into the 2020 elections having learned the lessons of Trump’s defeat and staring at full control of government with, potentially, a filibuster-proof Senate majority.”

“Instead, Republicans under Trump are on the verge of catastrophe.”

How a socialist beat one of Virginia’s most powerful Republicans: https://t.co/6HGolNtwOQ pic.twitter.com/qOVrCkjBYy

Matt Lewis: “The moral of the story for Republicans is that Trumpism is toxic in diverse areas full of educated suburbanites. As these regions continue to grow (and as the areas where Trump performs well continue to shrink), Republicans will face the demographic crisis we’ve been warning about for years.”

“This was always going to be a challenge for Republicans, but Trump and Bannon have exacerbated the problem. Roy Moore can win in deep-red Alabama; he can’t win in purple Virginia.”

Republicans have a big suburban problem, and their plan is to pass a tax cut that will make it worse https://t.co/Kuei0REZ4q pic.twitter.com/iITODGhD0G

Ron Brownstein: “For months, Republican strategists, and even some Democratic ones, have argued that because Trump is such a unique figure, voters unhappy with him were less likely to take it out on other candidates from his party than they’d been with previous presidents. Tuesday’s results exploded that idea. In both the Virginia and New Jersey gubernatorial races, exit polls found a clear majority of voters disapproved of Trump’s job performance—and that in both contests about 85 percent of those dissatisfied voters backed the Democrat. That result fits squarely in the range typical of House and Senate elections over the past two decades. In other words, it clearly signaled to congressional Republicans that they will be bound to Trump more than they hoped or expected in future elections.”

“The soaring wave of discontent translated into solid turnout and crushing margins for Democrats in their key voter groups, all of which have expressed intense resistance to Trump in polls.”

CNBC: “The GOP bill including some changes would increase federal budget deficits by $1.7 trillion over 10 years, according to Joint Committee on Taxation estimates shared by the nonpartisan Congressional Budget Office. That includes money for additional debt service payments due to the bill.”

“Under budget rules congressional Republicans are using to pass a tax plan, the bill can only increase deficits by $1.5 trillion over 10 years, before growth is taken into account.”