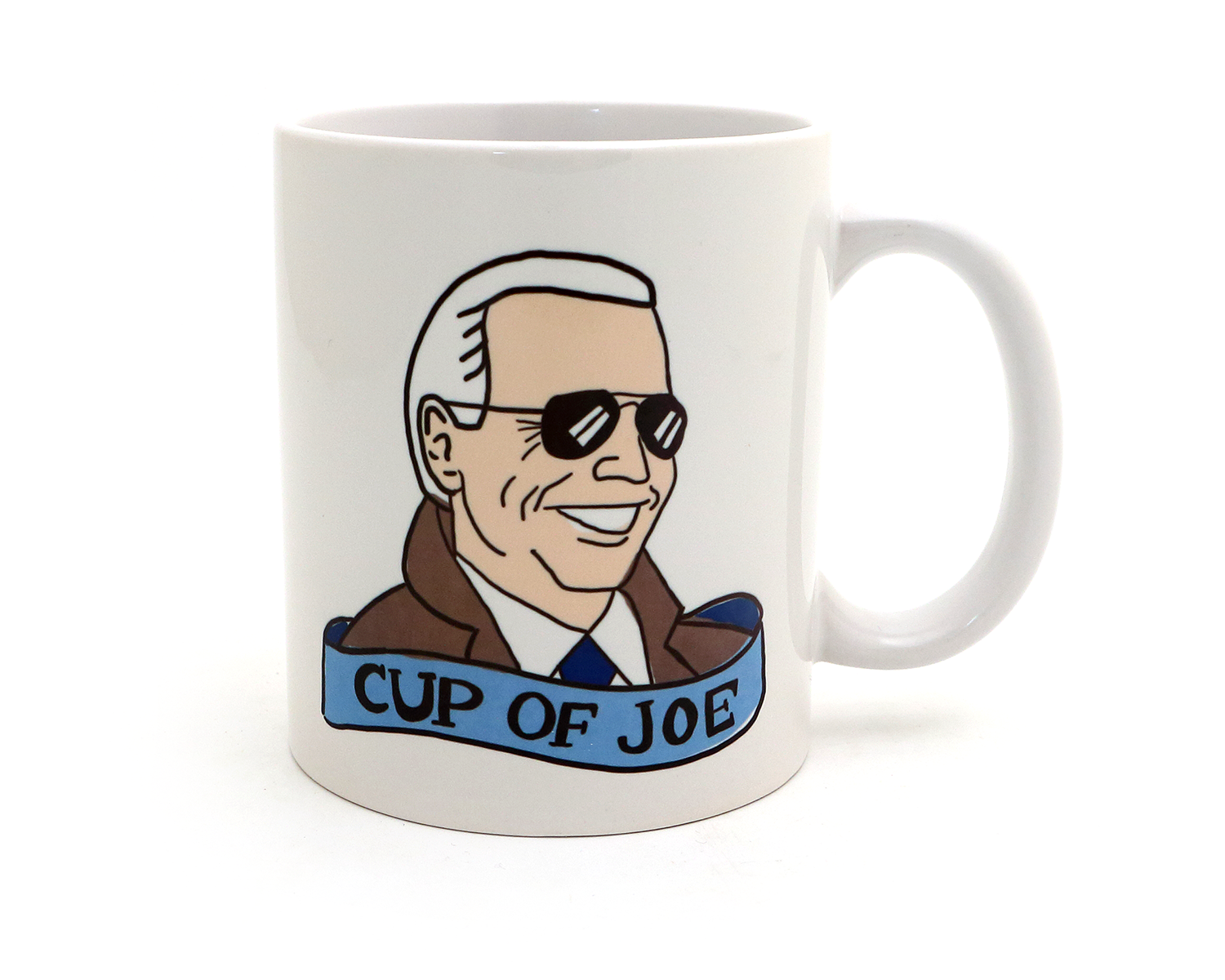 One of our longtime readers suggested that perhaps it was time to change the name of our daily morning news thread. The title we had been using, What Now?!, began during the Trump Administration in 2017 when every morning we awoke to some new and numerous fascist outrage or war crime committed by the former guy. While Republicans continue to labor under the fascist delusions of their fuhrer, and while they continue to attack democracy, the outrages are less frequent such that we don’t need to scream What Now?! every morning.

So we are changing the name to Cup of Joe in honor of our favorite morning beverage and our President. I expect to be sued shortly by MSNBC’s Morning Joe program and/or the Biden campaign.

“Sens. Ed Markey (D-MA) and Jeff Merkley (D-OR) told reporters they will only support an infrastructure package that is part of a broader guaranteed agreement to invest massively into clean energy infrastructure and urged their party leaders to immediately begin the budget reconciliation process to allow legislation to pass the Senate with only Democratic votes.”

“Huddling in person in the Capitol for the first time since the COVID crisis hit, members of the Democratic Caucus were briefed by Steve Ricchetti, a top adviser to Biden, and Shalanda Young, the deputy director of the Office of Management and Budget, who said they would give Senate negotiators seven to 10 days to reach a bipartisan agreement.”

“Essentially we’re all Joe Manchin. With the margins we have, everybody has the ability to tank whatever we’re trying to do… Unity is not only our strength, it is the only chance we have.” — House Budget Committee Chairman John Yarmuth (D-KY), quoted by CBS News.

“Sen. Bernie Sanders (I-VT), a member of the Senate Democrats leadership team, came out against a bipartisan agreement Monday night after meeting with a bipartisan group of 10 senators.”

Said Sanders: “I wouldn’t vote for it. The bottom line is, there are a lot of needs facing this country. Now is the time to address those needs, and it has to be paid for in a progressive way, given the fact that we have massive income and wealth inequality in America.”

Senate Majority Leader Charles Schumer (D-NY) “says he will convene a meeting with all 11 Democratic members of the Budget Committee Wednesday to begin the process for passing a budget resolution,” The Hill reports.

“That would set the stage for passing a massive infrastructure investment bill with only Democratic votes after the August recess.”

Wall Street Journal: “The House Oversight Committee released email exchanges on Tuesday that shed new light on former President Donald Trump’s unsuccessful efforts to get the Justice Department to investigate his baseless claims of voter fraud in the weeks before President Biden’s inauguration.”

“Among the communications was one from Mr. Trump’s chief of staff, Mark Meadows, who on Jan. 1 forwarded to the Justice Department a YouTube link referencing unsubstantiated allegations that people in Italy had manipulated the U.S. election results. A then-senior Justice Department official, Richard Donoghue, had two words for it: ‘Pure Insanity.’”

“An hour before President Donald Trump announced in December that William Barr would step down as attorney general, the president began pressuring Mr. Barr’s eventual replacement to have the Justice Department take up his false claims of election fraud,” the New York Times reports.

These emails “are also the latest example of Mr. Trump’s frenzied drive to subvert the election results in the final weeks of his presidency, including ratcheting up pressure on the Justice Department. And they show that Mr. Trump flouted an established anticorruption norm that the Justice Department acts independently of the White House on criminal investigations or law enforcement actions, a gap that steadily eroded during Mr. Trump’s term.”

But despite the “pure insanity” of the “evidence” cited by the White House, Rick Hasen reminds us of how close we came to undoing the American experiment:

“Here is the President of the United States directing a lawyer to pressure the Department of Justice into filing a brief in the Supreme Court that would have enjoined the appointment of presidential electors by 5 states that Biden won (and that had already appointed electors pursuant to legal state process).

This is nothing less than an attempt to use the courts to steal the election. It is brazen, and dangerous, and an affront to the rule of law. We are lucky that enough election administrators, elected officials, judges, governors and members of Congress blocked these attempts from going forward.”

As Philip Bump notes: “What’s noteworthy about the new reporting is that it reveals the extent to which Trump was willing to divert federal resources to chase down obviously untrue theories.”

“President Biden and European Union leaders on Tuesday reached a deal to put to rest a 17-year-old trade dispute about subsidies for aircraft manufacturers, a significant step in calming trade relations after the fury of the Trump years,” the Washington Post reports.

“The five-year truce, which was announced at the outset of a Tuesday meeting in Brussels between Biden and the top leaders of E.U. institutions, was the latest effort in a transatlantic reconciliation tour that the new president started last week at the Group of Seven summit in Britain.”

“At each stop, including at NATO on Monday, Biden has tried to mend ties that were damaged by President Donald Trump, who often sidled up to traditional American adversaries and targeted longtime allies with vitriol.”

The Hill: “Republicans have long disliked the tax-collection agency, and have been critical of President Biden’s proposal to give the IRS significantly more resources. Now, GOP lawmakers are amplifying their attacks on the IRS in light of an unauthorized disclosure of tax data to ProPublica, arguing that it undermines taxpayers’ ability to have confidence in the agency.”

Senate Minority Leader Mitch McConnell (R-KY) said that the Department of Justice and FBI need to investigate the disclosure of confidential tax information to ProPublica and bring criminal charges against those who are responsible, The Hill reports.

Said McConnell: “Actual consequences. As a matter of justice, and as a practical deterrent. The federal government owes taxpayers nothing less.”

Considering the magnitude of the leak, it’s interesting that Donald Trump’s tax information was not leaked as well.

Among his choices: Tom Nides to Israel, Ken Salazar to Mexico, Julie Smith to NATO and Sully Sullenberger to Council of International Civil Aviation Organizations.

“The Biden administration is set to on Tuesday announce a fourth round of judicial nominations, including a New York appeals court nominee with an expertise in voting rights — an issue likely to occupy the courts in coming months,” the New York Times reports.  “The nominations bring the current White House total for judges to 24.”

“The Senate approved the nomination of Judge Ketanji Brown Jackson to the federal appeals court in the District of Columbia, 53 to 44, confirming President Biden’s first nominee to the U.S. appellate courts,” CBS News reports.

“Jackson is considered a contender for the Supreme Court if a vacancy arises during Mr. Biden’s presidency, especially since the president has pledged to name the nation’s first Black woman to the high court if there is an open seat.”

“President Biden has named Lina Khan, a prominent critic of Big Tech, as the chairwoman of the Federal Trade Commission, a move that signals that the agency is likely to crack down further on the industry’s giants,” the New York Times reports.

Earlier in the day, the Senate voted 69 to 28 to confirm Khan to a seat at the agency. She does not need to go through additional Senate confirmation to take the role of chair.

“The FBI said this month that QAnon adherents could turn to violence as some of the conspiracy theory’s major predictions, including that Democrats would be subject to mass arrest and detention, have not come to pass,” the New York Times reports.

“The conspiracy theory holds that a corrupt cabal of global elites and career government employees who run a Satan-worshiping, child sex-trafficking ring will soon be rounded up and punished for their misdeeds; and that former President Donald Trump will be restored to the presidency.”

Punchbowl News: “You may recall that over the last few weeks, the Senate spent a lot of time and energy passing Senate Majority Leader Chuck Schumer’s bill to combat China’s rise.”

“Well, the House isn’t too interested in Schumer’s bill. They have ideas of their own. This will complicate Schumer’s effort to win quick and clean passage of the legislation in the House.”

The confirmed U.S. death toll from the coronavirus pandemic is now more than 600,000, according to Johns Hopkins University.

Washington Post: “States with higher vaccination rates now have markedly fewer coronavirus cases, as infections are dropping in places where most residents have been immunized and are rising in many places people have not.”

Washington Post: “At an ice cream shop in Rockville, Md., gloved servers scoop the frozen treat into cups, but a sign taped to the front window says ‘No cones: Covid.’ At McDonald’s outlets along I-95 in Virginia, yellow police-style tape cordons off self-serve beverage stations. And at Nationals Park, baseball fans use a QR code and digital menu rather than ordering directly from the person who hands them their hot dog.”

Associated Press: “After facing threats and intimidation during the 2020 presidential election and its aftermath, and now the potential of new punishments in certain states, county officials who run elections are quitting or retiring early. The once quiet job of election administration has become a political minefield thanks to the baseless claims of widespread fraud that continue to be pushed by many in the Republican Party.”

“The exits raise a pressing question: Who will take these jobs?”

Washington Post: “Russia and the United States — along with 23 other countries — recently reaffirmed that states should not hack each other’s critical infrastructure in peacetime or shelter cyber criminals who conduct attacks on other countries.

“But Russia, which was among the states originally agreeing to the norms at the United Nations, has violated them repeatedly over the years. Experts are skeptical those violations will halt unless the United States and its allies impose far more serious consequences.”

Associated Press: “Laws setting guiderails for classroom instruction on race passed this year in Republican-controlled states have left some teachers worried about how they will be enforced. Particularly in districts with large numbers of people of color, educators say they worry everyday discussions about students’ experiences could land teachers in hot water.”

NBC News: “Virtually all school districts insist they are not teaching critical race theory, but many activists and parents have begun using it as a catch-all term to refer to what schools often call equity programs, teaching about racism or LGBTQ-inclusive policies.”

“Now, conservative activists are setting their sights on ousting as many school board members as they can, and local Republican Parties have vowed to help, viewing the revolt against critical race theory as akin to the tea party wave from a decade ago.”

Alabama state Rep. Chris Pringle (R) was asked to define “critical race theory,” which he seeks to make illegal to teach in schools.

Said Pringle: “It basically teaches that certain children are inherently bad people because of the color of their skin, period.”

When asked for an example, Pringle replied: “These people, when they were doing the training programs — and the government — if you didn’t buy into what they taught you a hundred percent, they sent you away to a reeducation camp.”

“As COVID-19 case rates and deaths drop to levels not seen since the first days of the outbreak, travel picks up and schools and businesses reopen, Biden is proclaiming ‘a summer of freedom’ to celebrate Americans resuming their pre-pandemic lives.”

The Senate passed legislation establishing Juneteenth as a federal holiday after Majority Leader Chuck Schumer (D-NY) asked for unanimous consent and no objections were heard.

The bill heads to the House next.