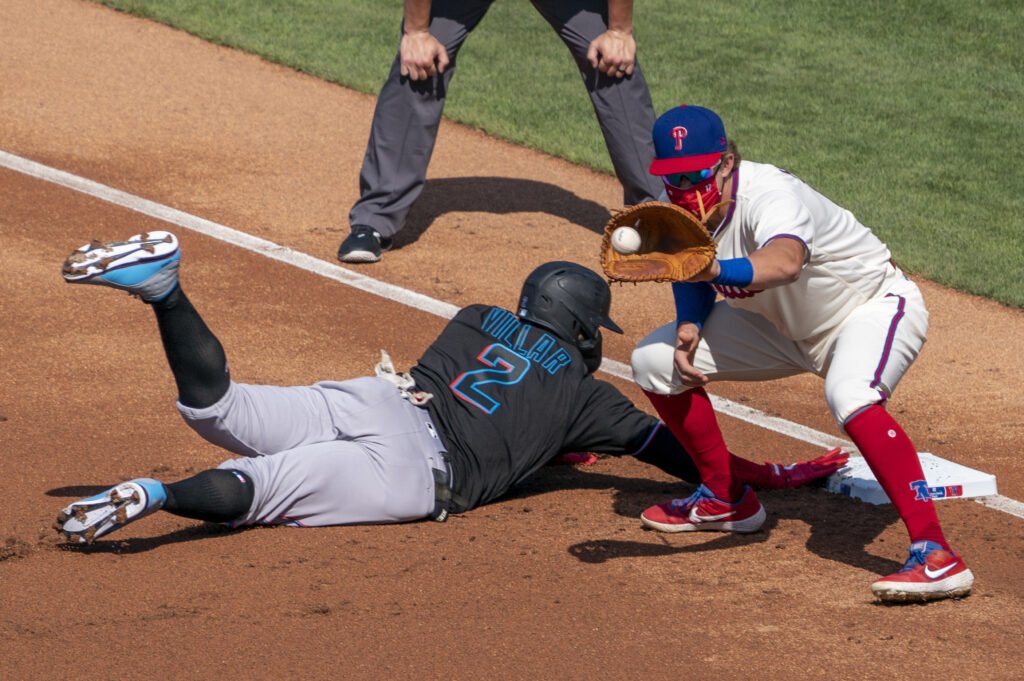 “In less than four days, the 2020 MLB season is seriously at risk after at least 14 members of the Miami Marlins tested positive for the coronavirus, canceling games in Miami and Philadelphia and kicking off an emergency league meeting,” Axios reports.

“It’s a bad sign for baseball moving forward. But most importantly, it’s a bad sign for just about everything in our daily lives — showing that something approaching normal can’t simply be willed into existence.”

The Athletic: “As baseball grappled with the repercussions of the outbreak on Monday, The Athletic contacted a collection of players, executives and staffers to gauge their level of comfort with the continuation of the season. Some requested anonymity in order to speak freely. The interviews revealed an industry roiling with concern about the circumstances of the outbreak, fear about traveling around the country, and resignation about the difficulty of keeping this experiment running.

The Phillies were slated to undergo testing on Monday and Tuesday, The Athletic’s Ken Rosenthal reported. A lab at Rutgers University was expected to return the results rapidly. But the incubation for COVID-19 anywhere from two to five days — meaning any Phillies who were theoretically infected on Sunday might not test positive until later in the week.

One rival executive indicated the stability of the season might depend on the outcome of the Phillies’ tests. If there was no evidence of transmission onto their roster, the season could stay on the rails. But an expansion of the outbreak could derail the entire endeavor, leaving baseball commissioner Rob Manfred to decide whether the game will go on.”

My prediction: Both the NFL and MLB seasons will be cancelled, sooner rather than later.

Washington Post: “Trump’s shortcomings have perplexed even some of his most loyal allies, who increasingly have wondered why the president has not at least pantomimed a sense of command over the crisis or conveyed compassion for the millions of Americans impacted by it.”

“People close to Trump, many speaking anonymously to share candid discussions and impressions, say the president’s inability to wholly address the crisis is due to his almost pathological unwillingness to admit error; a positive feedback loop of overly rosy assessments and data from advisers and Fox News; and a penchant for magical thinking that prevented him from fully engaging with the pandemic.”

“Senate Republicans propose cutting supplemental unemployment benefits to $200 weekly from $600 until states are able to create a system that would provide 70% of a laid-off worker’s previous pay,” Bloombergreports.

“The plan, which was agreed to by the Trump administration, calls for a two-month transition and then allows states to apply for a waiver for up to two additional months if they can’t implement the new calculation.”

Playbook: “We said last week the leverage here isn’t clear to us. But it’s becoming clearer. Sen. Lindsey Graham (R) said Sunday on Fox’s ‘Sunday Morning Futures’ that half of the GOP will vote against whatever the leadership comes up with. If that’s true, Democrats hold the keys.”

“Frustration among many Senate Republicans, not to mention Democrats, toward the White House has hit a fever pitch, with many lawmakers — including Majority Leader Mitch McConnell — admitting they could break for the August recess without a stimulus bill,” Axios reports.

Said one congressional aide: “They came in at the back end with a ton of unrealistic requests, like zeroing out funding for testing and forcing the FBI building into the package.”

“Republican leaders privately admit that if negotiations are a failure, the White House and Republicans will take the political hit since they’re running the show.”

Said White House economic adviser Larry Kudlow: “I still think the V-shaped recovery is in place. I don’t deny that some of these hot-spot states are going to moderate that recovery, but on the whole the picture is very positive.”

President Trump does not plan to visit the Capitol to honor the late civil rights icon Rep. John Lewis (D-GA), Bloomberg reports. Said Trump: “I won’t be going, no.” So here is a video of a real President doing exactly that.

“The Trump administration is sending more federal agents to Portland, Ore., as officials consider pushing back harder and farther against the growing crowds and nightly clashes with protesters, vandals, and rioters,” the Washington Post reports.

President Trump said he hasn’t recently seen national security adviser Robert O’Brien, who tested positive for coronavirus, ABC News reports. Said Trump: “I haven’t seen him lately. I heard he tested. Yeah, I have not seen him. I’m calling him later.” He is your National Security Advisor. You are supposed to see and listen to him every fucking day.

“President Trump shared tweets Monday from Republican senators touting the benefits of a $740 billion defense authorization bill — legislation he has threatened to veto if it retains a provision instructing the Pentagon to rename military installations honoring Confederate generals,” the Washington Post reports.

“His Twitter activity was the latest twist in Trump’s efforts to simultaneously claim credit for legislation authorizing pay increases for troops and other investments in the military while waging a battle over what he has characterized as an effort to erase U.S. history.”

“An Army National Guard commander who witnessed protesters forcibly removed from Lafayette Square last month is contradicting claims by the attorney general and the Trump administration that they did not speed up the clearing to make way for the president’s photo opportunity minutes later,” the Washington Post reports.

“A new statement by Adam DeMarco, an Iraq veteran who now serves as a major in the D.C. National Guard, also casts doubt on the claims by acting Park Police Chief Gregory Monahan that violence by protesters spurred Park Police to clear the area at that time with unusually aggressive tactics. DeMarco said that ‘demonstrators were behaving peacefully’ and that tear gas was deployed in an ‘excessive use of force.’”

Sen. Tom Cotton (R-AR) told the Arkansas Democrat Gazette that slavery was a “necessary evil” for the United States.

Said Cotton: “We have to study the history of slavery and its role and impact on the development of our country because otherwise we can’t understand our country. As the Founding Fathers said, it was the necessary evil upon which the union was built, but the union was built in a way, as Lincoln said, to put slavery on the course to its ultimate extinction.”

President Trump announced he wouldn’t be throwing out the opening pitch for the New York Yankees next month as he had planned.

Said Trump: “Because of my strong focus on the China Virus, including scheduled meetings on Vaccines, our economy and much else, I won’t be able to be in New York to throw out the opening pitch for the Yankees on August 15th. We will make it later in the season!”

“An hour before Dr. Anthony S. Fauci threw the first pitch at the season opener between the New York Yankees and the Washington Nationals, President Trump stood on the briefing room stage at the White House and declared that he, too, had been invited to throw out his own opening pitch,” the New York Times reports.

Said Trump: “Randy Levine is a great friend of mine from the Yankees. And he asked me to throw out the first pitch, and I think I’m doing that on Aug. 15 at Yankee Stadium.”

“There was one problem: Mr. Trump had not actually been invited on that day by the Yankees… His announcement surprised both Yankees officials and the White House staff.”

Politico: “While the president is hot to promote his Supreme Court list this fall – believing it will boost Republican turnout and remind religious conservatives what’s at stake as the nation’s culture wars flare — aides and outside advisers have become increasingly divided over its content and length. The standoff stems from recent concerns about Chief Justice John Roberts and Justice Neil Gorsuch — two Republican-appointed members of the high court who appalled party officials and conservative court watchers with their respective roles in two recent cases: one striking down a Louisiana law that would have dramatically curtailed abortion access, the other extending workplace discrimination protections to LGBTQ Americans.”

“Some want Trump to trim his list of potential Supreme Court candidates by half or more — ditching those with limited records from which to judge the consistency of their judicial philosophy and blocking fresh appointees to the federal court system from being added.”

Sen. Josh Hawley (R-MO), a member of the Senate Judiciary Committee, told the Washington Post that he would not support any future nominee for the Supreme Court unless they had publicly stated before their nomination that Roe v. Wade, the 1973 ruling that established federal protection for abortion, was “wrongly decided.”

“Federal Reserve officials meet Tuesday and Wednesday facing growing doubts about the prospect for a sustained economic rebound due to the nation’s uneven public-health response to the coronavirus,” the Wall Street Journal reports.

“Officials have warned this month in speeches and interviews that the economy faces a deeper downturn and more difficult recovery if the country doesn’t take more effective action to slow the spread of infection.”

“As a mother of four children, I do not trust this president with their lives.” — Atlanta Mayor Keisha Lance Bottoms (D), quoted by The Hill, criticizing President Trump’s push for schools to reopen in the fall amid surging coronavirus cases.

“Sen. Susan Collins (R-ME) said she would join Sen. Mitt Romney (R-UT) in opposing the nomination of economist Judy Shelton to the Federal Reserve’s board of governors,” the Wall Street Journal reports.

“Republicans have a 53-47 vote advantage in the Senate, meaning that Ms. Shelton can’t afford to lose more than three Republicans if all Democrats oppose her candidacy.”

“Google will keep its employees home until at least next July, making the search-engine giant the first major U.S. corporation to formalize such an extended timetable in the face of the coronavirus pandemic,” the Wall Street Journal  reports.

New details obtained by CNN reveal how Chief Justice John Roberts “maneuvered on controversial cases in the justices’ private sessions, at times defying expectations as he sided with liberal justices. Roberts exerted unprecedented control over cases and the court’s internal operations, especially after the nine were forced to work in isolation because of Covid-19.”

Former presidential candidate Herman Cain (R) is still in the hospital undergoing oxygen treatment more than three weeks after first being hospitalized with the coronavirus on July 2, Axios reports.