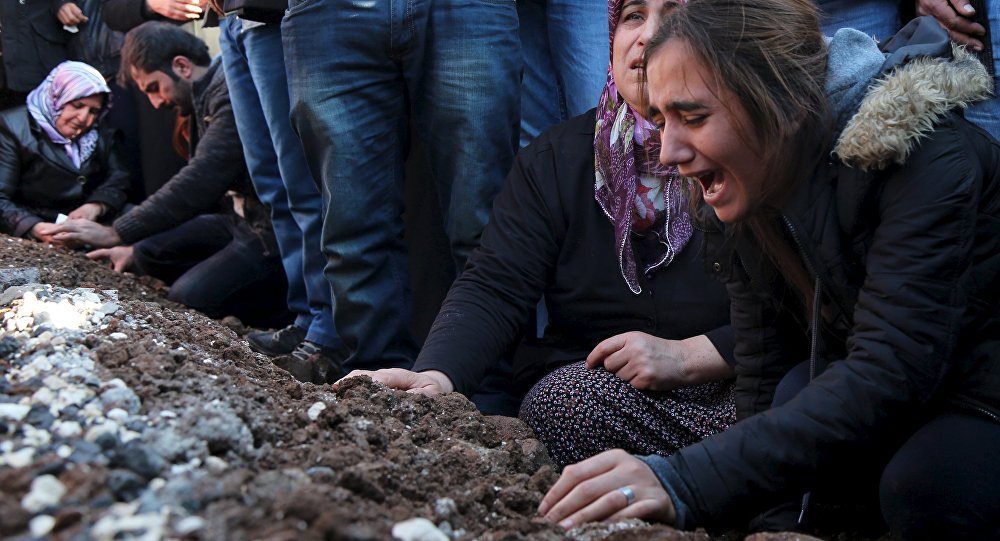 TURKEY COMMENCES ITS SECOND GENOCIDE AGAINST THE KURDS. Turkey’s first genocide was committed between 1914 and 1923 against the Armenian people. Now it’s Kurds’ turn, after Donald Trump abandoned our former allies to their killers. Turkish President Erdogan announced in tweet that Turkish offensive into northeast Syria has started.

New York Times: “Turkey’s planned move to root out Kurdish militants in northeastern Syria, after the United States withdrew its forces from two observation posts near the border, has sparked fierce debates in Washington and could open a dangerous new front in Syria’s eight-year-old war.”

“Syrian Kurds issued a ‘general mobilization’ call in northeastern Syria along the border with Turkey on Wednesday, as Ankara poised for an imminent invasion of the area in the latest major escalation in the war-ravaged country,” the AP reports.

“Turkey has long threatened an attack on the Kurdish fighters in Syria whom Ankara considers terrorists allied with a Kurdish insurgency within Turkey. A Syrian war monitoring group, the Britain-based Syrian Observatory for Human Rights, reported Wednesday that people were fleeing the border town of Tal Abyad, which Turkey is expected to attack first.”

REACTION TO THE WHITE HOUSE REFUSAL TO COOPERATE. The AP on the White House letter yesterday declaring no cooperation with the House impeachment probe: “The White House document lacked much in the way of legal arguments, seemingly citing cable TV news appearances as often as case law. And legal experts cast doubt upon its effectiveness.”

Jonathan Chait: “Advising President Trump on the law, and formally expressing his views thereof, is a pitiable task. Trump’s worldview is almost wholly incompatible with the law. The latter is premised on neutral rules, mediated by precedent and constructed with the goal of some notion of abstract fairness. The latter is rooted in an entitlement to absolute domination regardless of circumstance.”

“The White House letter rejecting the House impeachment inquiry is an effort to reconcile the irreconcilable. At the level of tone, it reads like an extended Trumpian rally diatribe lightly edited by an attorney. At the level of substance, it is almost pure, uncut Trump. It repeats a series of immaterial, laughably false claims, surrounding the audacious thesis that impeaching Trump is literally illegal.”

Playbook: “OK, so now we see for sure what the White House strategy is. It’s not only to refuse to cooperate in the impeachment probe, but it’s also practically to deny that Congress has any legitimate right to impeach President DONALD TRUMP — period. This shouldn’t be surprising. We’ve been headed in this direction for a while now. It basically ensures the president will be impeached for interfering with the work of Congress.”

New York Times: “But in refusing to cooperate with what Mr. Trump on Tuesday called a ‘kangaroo court,’ the president risked ensuring the very outcome he would rather avoid.”

DID THE QUID PRO QUO GO BACK FURTHER? “Democrats pursuing an impeachment inquiry of President Trump want to take a fresh look at whether the sale of anti-tank missiles to Kiev last year was in any way connected to Ukraine’s decision to halt investigations into Trump’s campaign chairman, Paul Manafort,” Politico reports.

“It raises the prospect that the president, or his aides, may have been pressuring the Ukrainian government in exchange for political favors far earlier than previously known.”

“Trump’s push to have Giuliani as gatekeeper is more direct than what was previously disclosed by one of the meeting’s participants in his statement to the House last week.”

TRUMP WANTED DOJ TO DROP CHARGES AGAINST GIULIANI CLIENT. Corruption, pure and simple. “President Trump pressed then-Secretary of State Rex Tillerson to help persuade the Justice Department to drop a criminal case against an Iranian-Turkish gold trader who was a client of Rudy Giuliani,” Bloomberg reports.

“Tillerson refused, arguing it would constitute interference in an ongoing investigation of the trader, Reza Zarrab, according to the people. They said other participants in the Oval Office were shocked by the request.”

Although earlier reports suggested Gowdy turned down the offer, CNN reports he agreed to do it after meeting with acting White House Chief of Staff Mick Mulvaney.

Mulvaney himself “has gone noticeably quiet over the past week, just as the president’s impeachment fight picks up. The White House’s acting chief of staff has not appeared on any major TV shows to defend President Trump, nor has he had any success in setting up an internal White House war room to respond to Democrats’ impeachment inquiry,” Politico reports.

“Instead, the president’s top aide has found his influence dwindling inside the West Wing as Trump faces the greatest threat to his presidency to date. It’s the same place where Reince Priebus and Gen. John Kelly found themselves, despite each having a wildly different management style and philosophical approache to the chief of staff job. Trump sidelined all three of them, even after Mulvaney made nice with his family and adopted his ‘let Trump be Trump’ ethos.”

DIPLOMATS TOLD TO PLAY DOWN THE RELEASE OF UKRAINE AID. “American diplomats who had pushed for the Trump administration to restore security funding to Ukraine were advised by the White House to play down the release of the money when it was finally approved,” the New York Times reports. Said Brad Freden, acting deputy assistant secretary in a September 12 email: “Keep moving, people, nothing to see here…”

“The money is now at the heart of an impeachment inquiry by House Democrats into whether President Trump withheld a total of $391 million in funding as he sought damaging information on his political opponents from Ukraine’s newly-elected leader.”

TRUMP’S BATSHIT INSANE COMMENTS ON THE KURDS. Trump dismissed concerns about the coming genocide of the Kurds by saying they never helped us on the beaches of Normandy in World War II. Yes, he really said that. When asked if he was concerned that Islamic State fighters would be able to escape because of Turkey’s military operation in Syria, Trump predicted that the militants would not travel to the United States, CBS News reports. Said Trump: “They’re going to be escaping to Europe.”

HOUSE DEMS PLAN BLIZZARD OF SUBPOENAS. “House Democrats are preparing a flurry of subpoenas in the face of the Trump administration’s stonewalling of their impeachment investigation, amid a new debate within their caucus over holding a vote to formally authorize the inquiry in order to call the White House’s bluff,” CNNreports.

“In the face of the blistering White House letter refusing to cooperate with their probe, Democrats expect they are likely done with any voluntary interviews for most witnesses… And Democrats are now threatening subpoenas to associates of Rudy Giuliani and considering them for current State Department officials, including former US Ambassador to Ukraine Marie Yovanovitch.”

Playbook: “Speaker Nancy Pelosi has led a fairly unified Democratic charge toward impeachment. She’s said consistently that Democrats don’t need a formal vote to move forward, but a few cracks have started to show. Rep. John Garamendi, a Democrat who represents a district in Northern California, was on CNN this morning and said Democrats should hold a formal impeachment inquiry vote, as Republicans have been demanding. He predicted that’s what would eventually happen.”

“A final decision will be made by Pelosi, who hasn’t ruled it out. But Pelosi advisers continue to argue that it’s unnecessary. They also point out that it was months before the House engaged in a similar vote during the Nixon impeachment process. And, even if Pelosi does move to vote on a formal impeachment inquiry, it’s unclear if the White House would participate. On a conference call Tuesday night, a senior administration official would not commit to cooperating with Democrats.”

THE FULL WHISTLEBLOWER MEMO HAS BEEN PUBLISHED. CBS News has the full contents of what appears to be a memo written by the whistleblower one day after President Trump spoke with Ukrainian President Volodymyr Zelensky in July.

“The official asserted that the President used the call to persuade Ukrainian authorities to investigate his political rivals, chiefly former Vice President Biden and his son, Hunter. The official stated that there was already a conversation underway with White House lawyers about how to handle the discussion because, in the official’s view, the President had clearly committed a criminal act by urging a foreign power to investigate a U.S. person for the purposes of advancing his own reelection bid in 2020.”

“Treasury could narrow regulations aimed at preventing U.S. firms from lowering their U.S. tax bills by borrowing from an offshore branch of the company. The department is also contemplating repealing them entirely to replace them with something more business-friendly.”

BETTY DEVOS THREATENED WITH JAIL. “Secretary of Education Betsy DeVos faces potential sanctions or a finding she’s in contempt of court for continuing to collect on the debt of former students at bankrupt Corinthian Colleges Inc., going so far as seizing their tax refunds and wages,” Bloomberg reports.

Said U.S. Magistrate Judge Sallie Kim: “I’m not sure if this is contempt or sanctions. I’m not sending anyone to jail yet but it’s good to know I have that ability.”

IT TOOK A LONG TIME FOR REPUBLICANS TO ABANDON NIXON. Amelia Thomson-DeVeaux: “Support for impeachment had grown slowly over the course of 1974, but there still wasn’t an overwhelming public consensus behind it until right before Nixon left office in early August. And Republican support for Nixon had remained mostly strong, even in the face of a scandal that consumed his second term. As the truth about the scope of Nixon’s misconduct emerged, though, impeachment became increasingly popular and the president lost even his most fervent defenders in Congress.”

“Of course, there are many differences between the Nixon impeachment and the Democrats’ current inquiry, which is still in its early stages, and each impeachment investigation will unfold differently. But as today’s Republicans are scrutinized for signs that they might turn on Trump, it’s important to remember that even in Watergate, it took more than a year of investigation — and a lot of evidence against Nixon — to reach the point where Republicans like Hogan were voting for impeachment.”

BUDGET DEFICIT EXPLODES. “The government ran a budget deficit of just under $1 trillion in the just-closed fiscal year,” the AP reports. “The $984 billion deficit tally for 2019 came in more than $200 billion more than last year’s, despite very low unemployment and continuing economic growth.”

TRUMP RAGED AGAINST SOMALIA. “In the first few months of his administration, President Trump asked then-acting Homeland Security Secretary Elaine Duke why he could not ban refugees from ‘fucking Somalia’ in a bout of rage at his Bedminster golf club,” CNN reports.

“The episode, detailed in the new book titled Border Wars, reveals the President’s belief that people from Somalia posed a danger to the US. Months earlier, Trump targeted foreign nationals coming to the US from eight countries, including Somalia, in his ‘travel ban’ executive order.”

The book states: “Both he and Stephen Miller seemed to have a particular dislike for Somalia, often citing it or its nationals when they spoke of the potential dangers of refugees and other immigrants.”