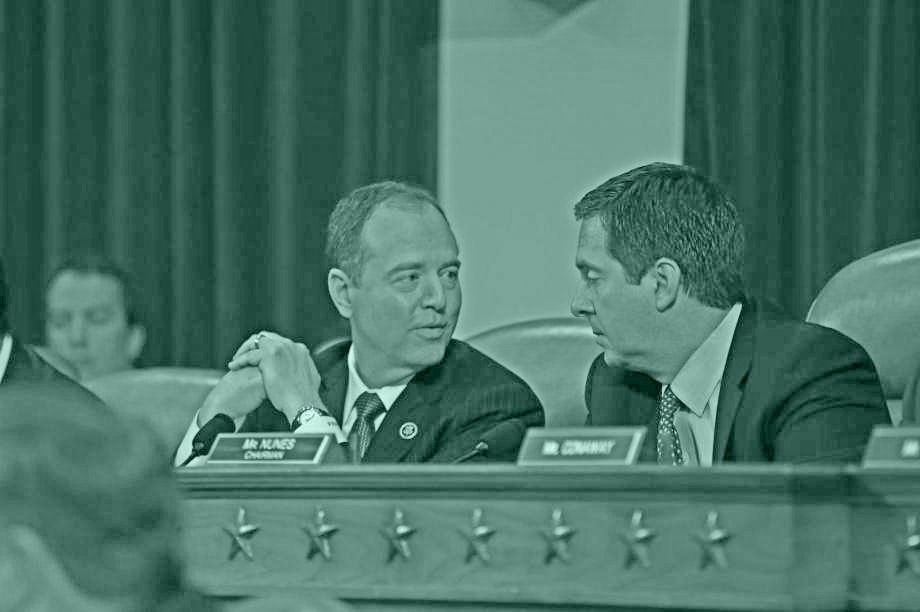 House Intelligence Chairman Adam Schiff (D-CA) and Ranking Member Devin Nunes (R-CA) sent a joint request to the Department of Justice requesting that special counsel Robert Mueller brief their committee and provide “all materials, regardless of form and classification, obtained or produced” during his 2-year investigation, the Daily Beast reports.

“Deutsche Bank received a subpoena Monday afternoon from the House Intelligence and Financial Services committees,” CNN reports. “The full scope of the subpoena could not be determined. The subpoena is seeking information about loans Deutsche Bank gave to President Trump and the Trump Organization.”

Playbook: “[The Mueller Report] release comes right before Easter and Passover, and coincides with one of the longest recesses on Capitol Hill. No matter what the report says, that D.C. will be empty is a bit of a boon to the president and his team.”

NBC News: “Some of the more than one dozen current and former White House officials who cooperated with special counsel Robert Mueller are worried that the version of his report expected to be made public on Thursday will expose them as the source of damaging information about President Donald Trump, according to multiple witnesses in the investigation.

“Some of the officials and their lawyers have sought clarity from the Justice Department on whether the names of those who cooperated with Mueller’s team will be redacted or if the public report will be written in a way that makes it obvious who shared certain details of Trump’s actions that were part of the obstruction of justice probe, people familiar with the discussions said. But, they said, the Justice Department has refused to elaborate.”

“Of particular concern is how Trump — and his allies — will react if it appears clear precisely what specific officials shared with Mueller.”

CNN: “While few people close to Trump are predicting any bombshells, there is a sense of apprehension among advisers because they believe the full report will provide the closest and most credible account to date of tumult and chaos inside the West Wing.”

“The damage will be in the details, these advisers believe, given the broad strokes of what Mueller has been investigating are mostly already known. And because the report won’t be based on anonymous sources, but will instead contain accounts attributed to former officials and allies of the President relayed under penalty of lying to federal investigators, it will carry a heavy weight of credibility.”

“President Trump’s personal lawyer urged the Treasury Department not to hand over Mr. Trump’s tax returns to House Democrats, warning that releasing the documents to lawmakers he accused of having a ‘radical view of unchecked congressional power’ would turn the Internal Revenue Service into a political weapon”, the New York Times reports.

“It was the second such letter written on behalf of Mr. Trump since Rep. Richard Neal, the Democratic chairman of the House Ways and Means Committee, formally requested six years of the president’s personal and business tax returns earlier this month.”

New York Times: “Seeking little credit — and getting even less — Mr. McConnell has expedited virtually everything Mr. Trump has asked of him since 2017.”

“But critics say Mr. McConnell’s acquiescence — he even strong-armed Senate rule changes to ease the president’s nominations to confirmation — has only encouraged Mr. Trump to go further out of the mainstream.”

“Mr. McConnell, speaking in his office last week, promoted his collaboration with the White House on nominations and tax reform but pushed back when asked if Mr. Trump’s unpredictable behavior had hijacked his legacy.”

The Atlantic: “For decades, presidents and vice presidents have held regular one-on-one lunches with no aides present. The ritual helps build trust and, because only two people are at the table, prevents leaks, veterans of past White Houses said.”

“Trump ditched that tradition. Instead he has invited to the lunches both his and Pence’s top aides. At the meals in the small dining room off the Oval Office, Trump keeps a big-screen TV tuned to cable news. Aides who have walked in have seen Trump yelling at the TV as he sits with Pence and their deputies over plates of chicken and cheeseburgers. When he sees something on the screen that he dislikes, Trump on occasion will interrupt the lunch and summon aides to discuss a response, people familiar with the lunches said.”

“Mr. Bernhardt, a former lobbyist for the oil and agribusiness industries, was confirmed by the Senate last week to head the agency.”

Speaker Nancy Pelosi said she intends to lock down the 2020 House election a year in advance, “stressing the importance of recruiting candidates who can unseat GOP incumbents in swing districts,” The Hillreports.

Said Pelosi: “I intend to have this election won by this November, because by a year in advance, that’s when people decide they’re going to run for office. We want the message to be clear, we will retain the majority, we will grow the majority and will do so because our candidates are doing their constituent work. We are, again, owning the ground, drilling down with our message, having the resources to win.”

She added: “So if you are Republican who might be thinking about running for Congress, you have to look at the strength of the person you want to unseat. And if you’re a member of Congress, and you’re a Republican, and you’re deciding that you might be ready for retirement, you may have to remember that it’s going to cost you a lot of money to win or to lose. But if you win, you will be serving in the minority.”

New York Times: “Mulvaney’s careful campaign of deconstruction offers a case study in the Trump administration’s approach to transforming Washington, one in which strategic neglect and bureaucratic self-sabotage create versions of agencies that seem to run contrary to their basic premises. According to one person who speaks with Mulvaney often, his smooth subdual of the C.F.P.B. was part of his pitch to Trump for his promotion to White House chief of staff — long one of the most powerful jobs in Washington.”

“Mulvaney’s slow-rolling attack on the bureau’s enforcement and regulatory powers wasn’t just one of the Trump era’s most emblematic assaults on the so-called administrative state. It was also, in part, an audition.”

The Atlantic: “George P. Bush is running. For what? Probably governor of Texas. When? It’s too soon to say. But he’s inched his way into the national consciousness in the past two years, first as the lone Bush to endorse Donald Trump for president, and more recently as the final person to eulogize George H. W. Bush before he was laid to rest.”

“Which is to say, Bush is moving now to claim his title as Future of the GOP. But will the party of Trump tolerate a candidate who mirrors a past class of conservatives in tone, in temperament, in ideology? And even if Bush does manage to satisfy the base’s newly populist appetites, can he do so without alienating the broader cross-section of voters needed to win a general election?”

“The White House is interviewing candidates to potentially replace Herman Cain and Stephen Moore as Donald Trump’s picks for the Federal Reserve Board,” Bloomberg reports.

New York Times: “Firmly atop most polls, Joseph Biden Jr., the former vice president, has delayed joining the race so far. But if he enters the 2020 contest in the coming weeks, as expected, Mr. Biden will begin well behind financially. No fewer than nine candidates ended the first quarter with at least $6 million.”

“Some quick and foreboding math: If Mr. Biden were to enter the race by May 1, he would have to raise roughly $100,000 every day through June 30 just to match where the ninth-best-funded candidate stood at the end of March.”