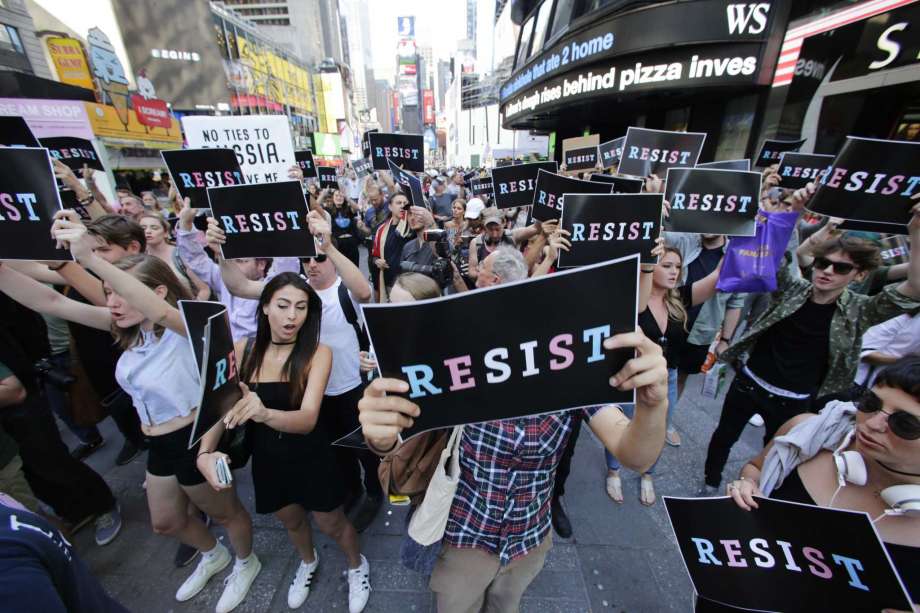 DONALD TRUMP IS A BIGOTED MONSTER.  President Trump announced in a series of tweets a ban on transgender people in the U.S. military, the Washington Post reports.

“After consultation with my Generals and military experts, please be advised that the United States Government will not accept or allow transgender individuals to serve in any capacity in the U.S. Military. Our military must be focused on decisive and overwhelming victory and cannot be burdened with the tremendous medical costs and disruption that transgender in the military would entail.”

Politico: “House Republicans were planning to pass a spending bill stacked with his campaign promises, including money to build his border wall with Mexico.”

“But an internal House Republican fight over transgender troops was threatening to blow up the bill. And House GOP insiders feared they might not have the votes to pass the legislation because defense hawks wanted a ban on Pentagon-funded sex-change operations — something GOP leaders wouldn’t give them.”

“They turned to Trump, who didn’t hesitate. In the flash of a tweet, he announced that transgender troops would be banned altogether.”

Further, this is a nice little distraction piece for his opponents while a sop to his base.   A Trump administration official tells Jonathan Swan:  “This forces Democrats in Rust Belt states like Ohio, Michigan, and Wisconsin, to take complete ownership of this issue. How will the blue collar voters in these states respond when senators up for re-election in 2018 like Debbie Stabenow are forced to make their opposition to this a key plank of their campaigns?

“Skinny repeal” isn't just a vote to help the process along. It’s a vote to uninsure millions of Americans. https://t.co/d4g2y9VrMp

SESSIONS V. TRUMP.  Washington Post: “Another scenario is that Trump could make a recess appointment… Under that plan, Trump could choose an attorney general during the August recess who would serve until the end of the next Senate session, which would run to Jan. 3, 2019. That person would have the same authority as someone who is confirmed by the Senate.”

“For a week, some of President Trump’s top aides have tried to talk him down from his public campaign against Attorney General Jeff Sessions. Not only was it exposing tensions within the administration, it was stirring consternation with the conservative base and setting off a major revolt among Senate Republicans incensed over the treatment of a former colleague,” the New York Times reports.

“By Wednesday afternoon, just hours after the president’s latest broadside against the attorney general, several officials said they thought the storm had passed: Mr. Trump would let Mr. Sessions stay in office, at least for now.”

Washington Post: “President Trump has discussed with confidants and advisers in recent days the possibility of installing a new attorney general through a recess appointment if Jeff Sessions leaves the job, but he has been warned not to move to push him out because of the political and legal ramifications.”

TILLERSON OUT BY END OF YEAR.  “Frustration is mounting among leading foreign policy officials in President Donald Trump’s administration as they chafe at some policy and bureaucratic defeats and complain they lack independence to do their jobs,” Reuters reports.

“The clash between internationalists urging the traditional U.S. leadership role in the world and advocates of an ‘America First’ approach has worn down foreign policy and intelligence professionals inside the government.”

“Secretary of State Rex Tillerson has told friends he will be lucky to last a year in his job, according to a friend, while two officials said national security adviser H.R. McMaster was frustrated by what he sees as disorganization and indiscipline on key policy issues inside the White House.”

One takeaway: Uninsured would go from 26M next year to 44M. pic.twitter.com/WloRPczCbc

James Hohmann: “Benczkowski, who helped manage Trump’s transition team for the Justice Department, has signaled that he plans to be evasive when questioned about the specifics of his work for the Putin-linked bank.”

Josh Marshall says Trump’s actions on AG Sessions is all about obstruction.   “[T]he entirety of President Trump’s battle with Jeff Sessions is about obstructing the Russia probe. The anger began over his recusal (and grew as the consequences of that recusal became more apparent) and continues with the President’s desire to replace him with another Attorney General who will help him end the investigation or at least remove Robert Mueller from leading it. That is the only thing this is about.

In all other respects, Sessions is doing everything Trump could have asked for. Indeed, the near unanimity of conservative support for Sessions in this current battle is because Sessions is performing as a dream hard-right AG. He’s rolling back voting rights, turning back the very limited reforms of laws and policies behind mass incarceration, pushing a hard-right anti-immigrant agenda. Trump’s battle with Sessions is about obstruction. Nothing more, nothing less.”

A bill that would just repeal of the Affordable Care Act was voted down by the U.S. Senate, the New York Times reports.  “The vote underscored the bind that Republican leaders have found themselves in. Repealing the health law without an immediate replacement lacks crucial support among Republicans, but a more comprehensive measure that would have repealed major parts of the law with a ready replacement also came up short on Tuesday night.”

The New York Times has a good tally of the votes.  David Nather: “Leading conservative groups, including Americans for Prosperity and FreedomWorks, are making today’s Senate vote on a straight repeal of the Affordable Care Act a ‘key vote’ — meaning they’ll use it in the 2018 election to evaluate senators’ voting records.”

Jonathan Chait on the Skinny Repeal bill:  “It’s not clear whether the skinny bill would melt down the individual market altogether. There’s not much study of this as a stand-alone policy, mainly because it’s a terrible idea nobody has ever thought to propose, and Republicans came up with it just this week in a mad rush. The tax credits in Obamacare might create a stable-enough customer base. (Low-income consumers can get insurance for free, so they have no reason to skip out until they’re sick.) And some states, prodded by nervous insurers, might create a state-level mandate to replace the disappearing federal one. But it is clear that the skinny bill would damage the markets and increase premiums while advancing no coherent policy objective.”

President Trump’s “abrupt announcement” banning transgender people from the military “seemed to stun military leaders,” even though Trump said in a series of tweets that he consulted with “my generals and military experts,” BuzzFeed reports.

“At the Pentagon, the first of the three tweets raised fears that the president was getting ready to announce strikes on North Korea or some other military action. Many said they were left in suspense for nine minutes, the time between the first and second tweet. Only after the second tweet did military officials receive the news the president was announcing a personnel change on Twitter.”

This is the state of play on “Skinny repeal vs. AHCA in conference,” as best I can tell:https://t.co/uVUY0xEGkx

“The declaration came in a 115-page filing as part of the government’s case against Dmytro Firtash, a Ukrainian oligarch who was once involved in a failed multimillion-dollar deal to buy New York’s Drake Hotel with Manafort, and an important player in the Ukrainian political party for which Manafort worked.

Here it is: GOP Rep. Carter, asked about Murkowski: "Somebody needs to go over there to that Senate and snatch a knot in their ass." @MSNBC pic.twitter.com/1CVcENn9Kq

A new Economist/YouGov poll finds that Republicans favor having courts “shut down media outlets” for “biased or inaccurate” stories by a 45% to 20% margin, with 35% unsure.

James Hohmann: “It’s hard to overstate the degree to which White House officials and Senate GOP leaders just want to pass something — really, anything — to show the base that they are keeping their promise to roll back Obamacare. They would happily portray even most modest tweaks to the Affordable Care Act as major successes to save face. As far as they’re concerned, whatever gets passed will be the basis for negotiations with the House. So this is not even a final product.”

“Opening floor debate may be a Pyrrhic victory for the GOP: Democrats are going to force Republicans to cast some uncomfortable votes in the coming days as part of the freewheeling amendment process. Regardless of whether a bill ultimately passes, and how they try to spin it, every senator who voted for the motion to proceed just gave years of fodder to Democratic admakers. “

“Senators are planning to continue procedural moves to prevent the Senate from formally adjourning for recess next month in order to prevent President Trump from making recess appointments, when the chamber eventually adjourns through the Labor Day weekend,” CNN reports.

“Using the threat of a filibuster, Democrats plan to force the Senate to hold pro forma sessions — a practice both parties have carried out to block recess appointments from presidents of opposite party… Recess appointments let a president install nominees who normally must be confirmed by the Senate; their terms would run through the end of the ‘next session’ of the Senate, but the ‘pro forma’ sessions essentially means the Senate is never in recess.”

Paul Manafort “will meet with Senate investigators in the next 48 hours and has agreed to provide notes of the meeting at Trump Tower last year with a Russian lawyer,” Politico reports.

Axios: “Manafort took notes, but Kushner said the meeting was ‘a waste of our time’ and one he ‘did not recall at all’ until it came up in recent media reports and Trump Jr. said the meeting produced ‘no meaningful information.’”